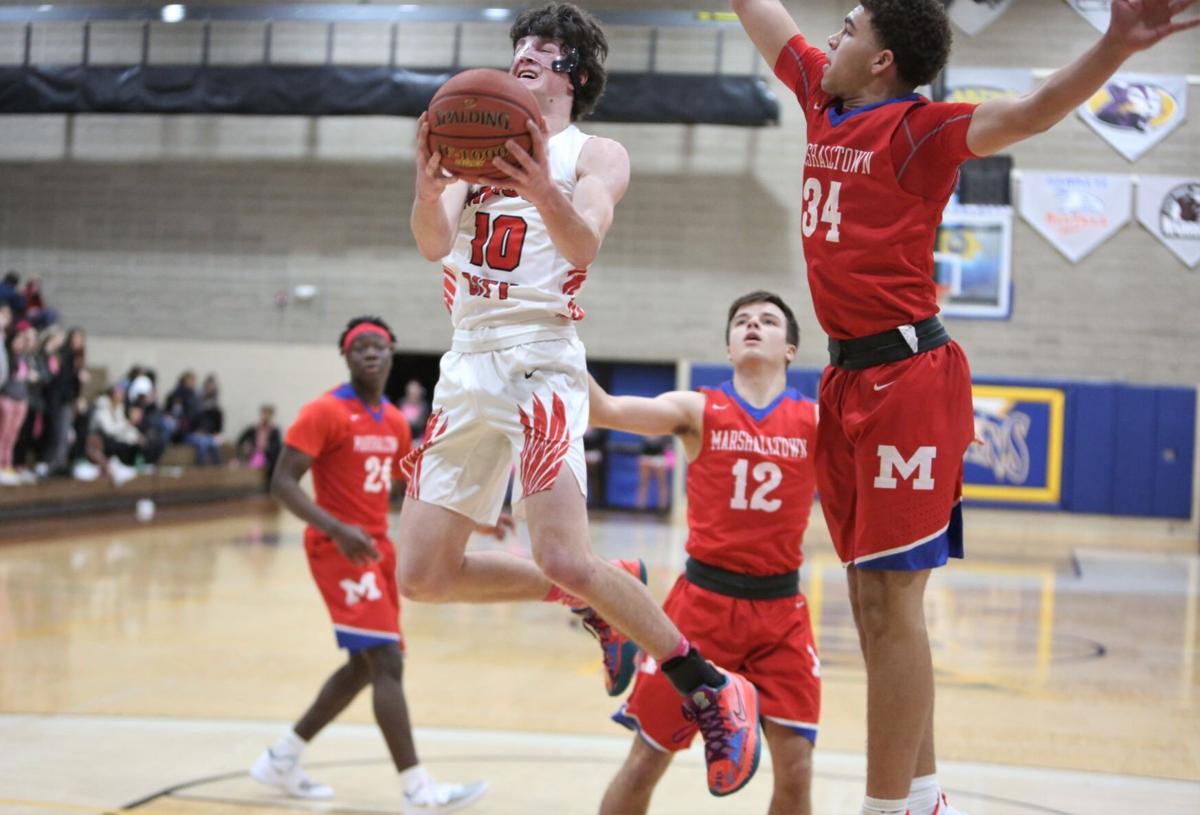 Mason City junior Kale Hobart (10) launches himself up to score against Marshalltown at a game in the NIACC gym on Thursday. 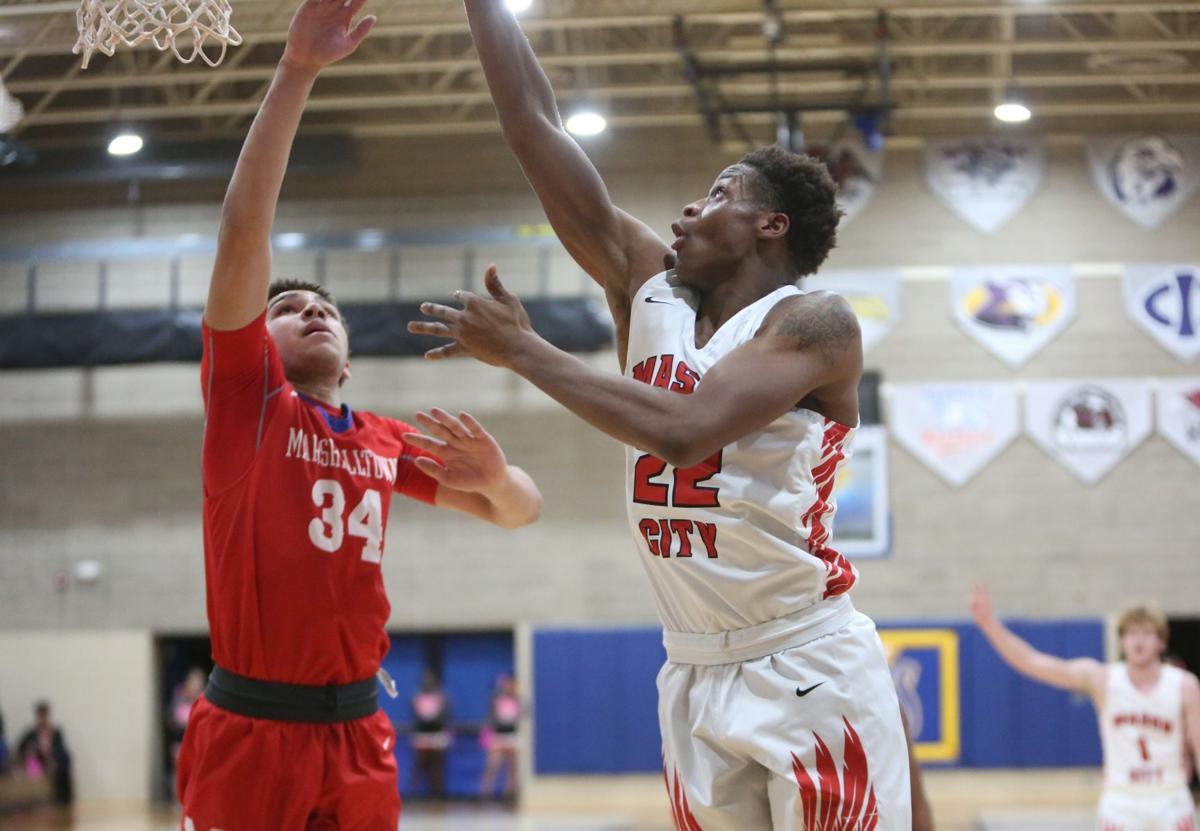 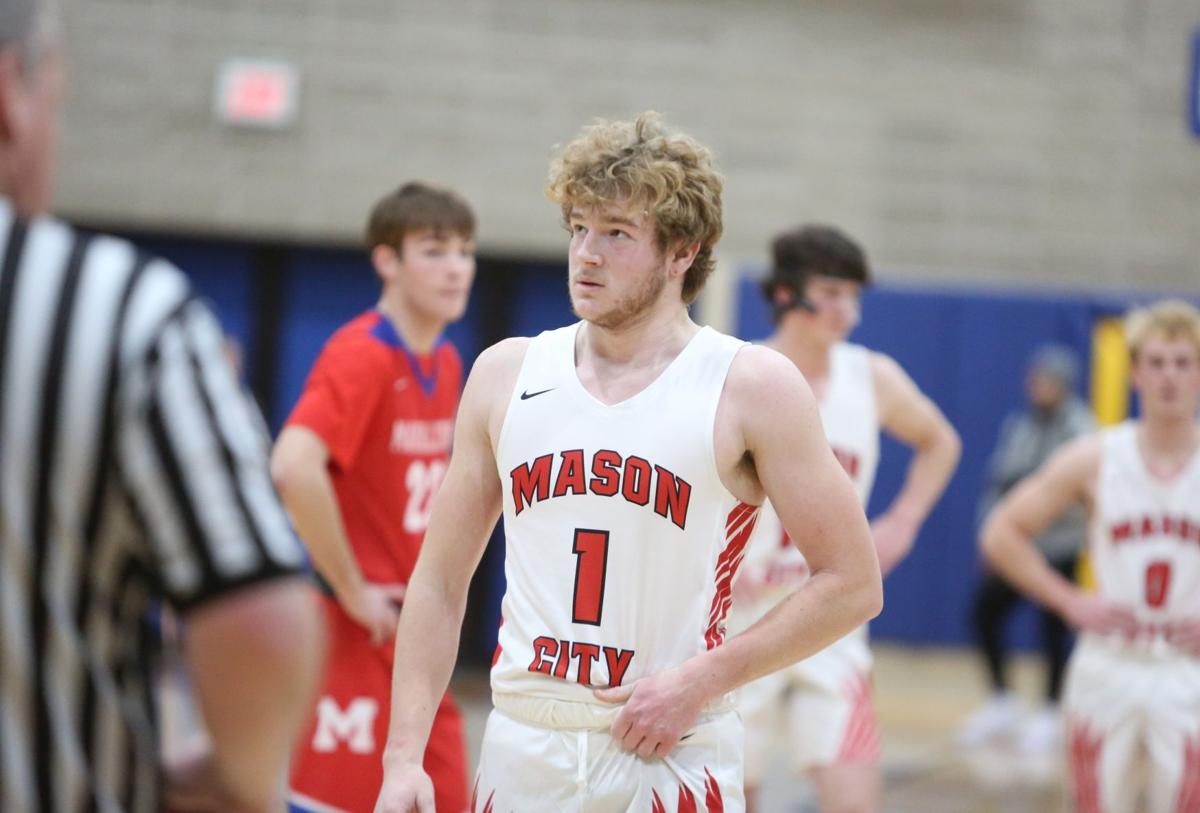 Mason City's Carter Thomas (1) walks to the free throw line after being fouled by Marshalltown during a home game on Thursday.

Corey Miner and Isaiah Washington get the headlines for Mason City's boys basketball team. After all, the senior duo have been it's two best players this season and are averaging double figures a game.

Yet there's a quartet of two additional seniors and two juniors that can take some slack off of Miner and Washington.

And despite the 61-55 setback to CIML-Iowa rival Marshalltown, Mason City got key contributions from three of the four players.

Mike Willis was in the starting lineup and registered 11 points, second most on the team. Carter Thomas was a ball hawk yet again with multiple steals and a clutch 3-pointer in the final quarter. Kale Hobart slashed his way to the rim for seven points and was sound defensively.

"If we're going to win at this level in the CIML, we need all five guys," Mason City head coach Nicholas Trask said, "and bench players."

Each one of those three brings something different to the table. The fourth player that didn't play is Jess Cornick, another guard that the majority of the time starts and provides key minutes.

Thomas, the multi-sport standout, takes a back seat to Miner and Washington on the hardwood. Thomas is well aware of his role, which is to play lockdown defense and be the energizer bunny.

He had seven assists and six rebounds to go along with his seven points against the Bobcats.

"The more we get confidence, the more that opens them up and that makes our team a whole lot better," Thomas said.

Trask calls Thomas "strategic" in trying to find ways to beat a drill and his opposition. There have been several times this season Thomas has recorded multiple steals as he leads Class 4A with 30 of them.

"Sometimes he gets to the ball, that he's got no right getting to it," Trask said. "He'll find some hole in the rules to be able to get an advantage. He will find it and I'll just sit back and be like 'You got me again' and that's how his mind works is one step ahead."

Willis hasn't been playing basketball for very long, but at 6-foot-5, he does create a mismatch against smaller lineups. Add in his athleticism, plus a mid-range game that tuned to five field goals, as reasons why players enjoy being his teammate.

Thursday was just the third time this season Willis was in the starting five.

"We're there to help each other," he said. "We know what the next person can do."

Whether Willis comes off the bench or not, he gives Mason City an additional post if Washington gets into early foul trouble. Both of the forwards were dinged with four fouls against Marshalltown that created rotation changes.

Still, Trask has been more than pleased with the emergence of the player he calls "Big Mike."

"He's gotten consistently better every single game for us," Trask said. "Honestly, it is the rebounds and offense that brings more of a strength."

Then there's Hobart, the crafty forward that Trask agreed represents a glue guy. Mason City's starting quarterback in the fall, Hobart has always appreciated the challenge of guarding the opposition's best player.

Sometimes he draws the assignment, sometimes he doesn't. The effort and the ability to want it is what is beloved by the coaching staff.

"He'll be the first one to call his teammates out in a positive way," Trask said. "You love to have a guy that has that type of attitude."

Thomas isn't shying away from what could happen if all four get hot at the same time.

"When we have four guys that can complement that and we're all on fire, which I don't think we've hit that yet," he said. "When we do hit that, I definitely think we'll be really good."

Mason City has played a daunting schedule, one that won't get easier as the season goes along. By February, Trask is hopeful it will reap the rewards.

Willis has a different timeline.

"The work, is coming now, so it is starting already," he said.

Mason City's perimeter defense was one of its biggest strengths on Thursday night. It didn't allow Marshalltown much room on shots and if it d…

Newman Catholic lost its first game of the season against Osage, but it could be a positive learning lesson for the seventh-ranked team in Class 1A.

Osage's boys basketball team is a perfect 7-0 on the season at home and is coming off its biggest win of the year thanks to a hot night of shooting from the field.

There have been some switches in Osage's lineup since it narrowly beat Nashua-Plainfield a couple of weeks ago. Four different wrestlers have …

Mason City junior Kale Hobart (10) launches himself up to score against Marshalltown at a game in the NIACC gym on Thursday.

Mason City's Carter Thomas (1) walks to the free throw line after being fouled by Marshalltown during a home game on Thursday.