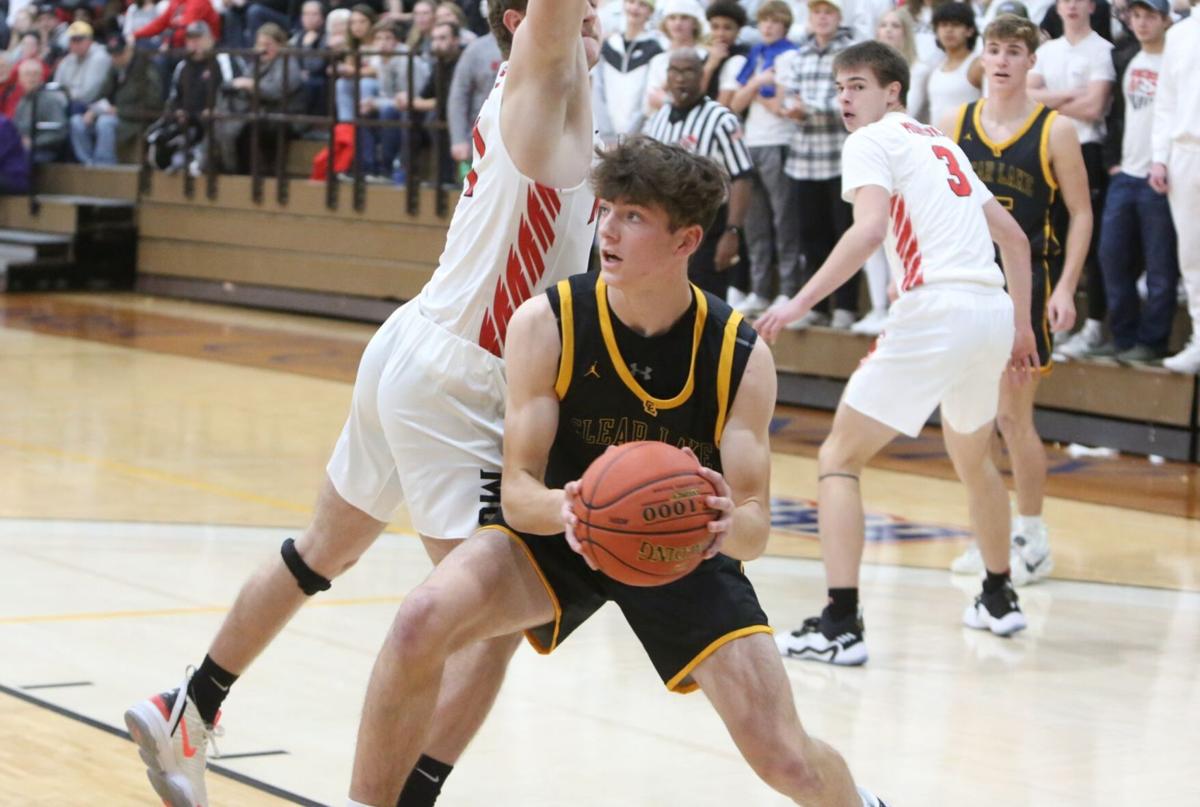 Clear Lake's Thomas Meyer (21) looks to pass during a game against Mason City at NIACC earlier this season. 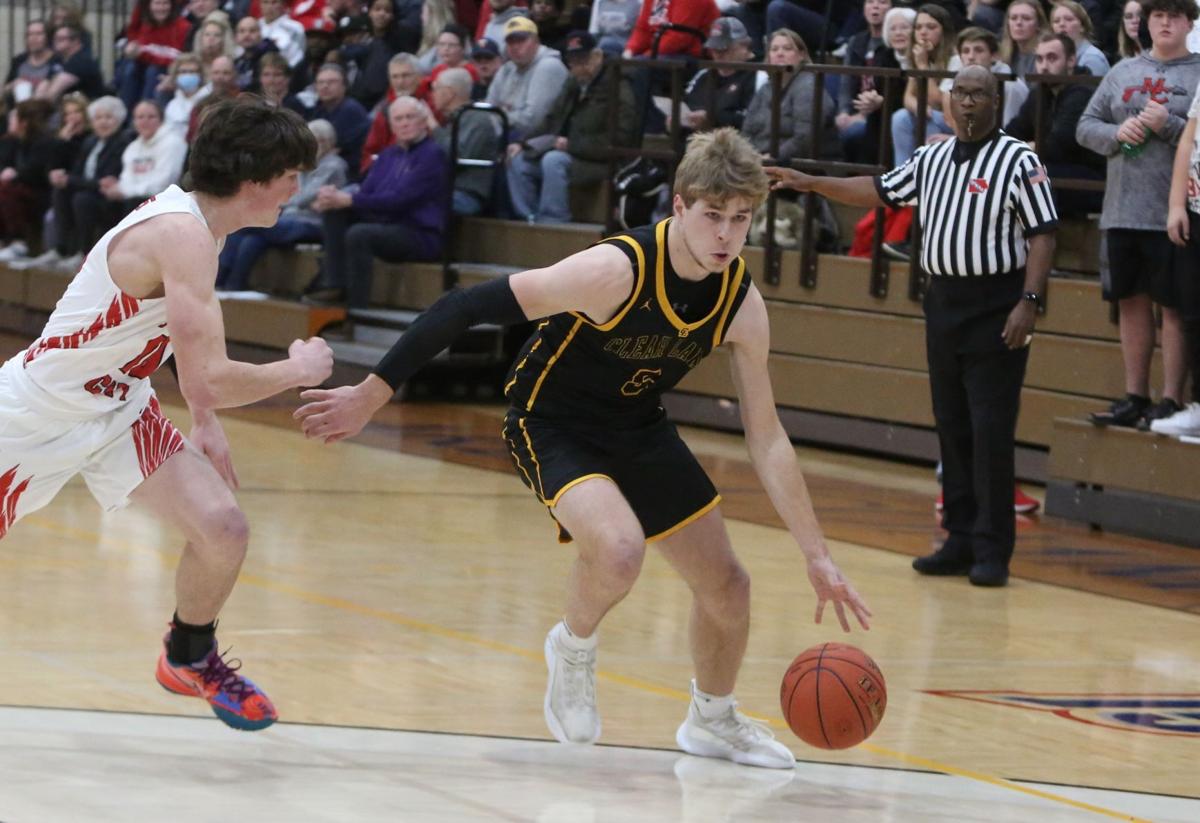 Clear Lake's Carson Toebe (5) drives the ball toward the basket as Mason City's Kale Hobart (10) closes in during a game at NIACC earlier this season. 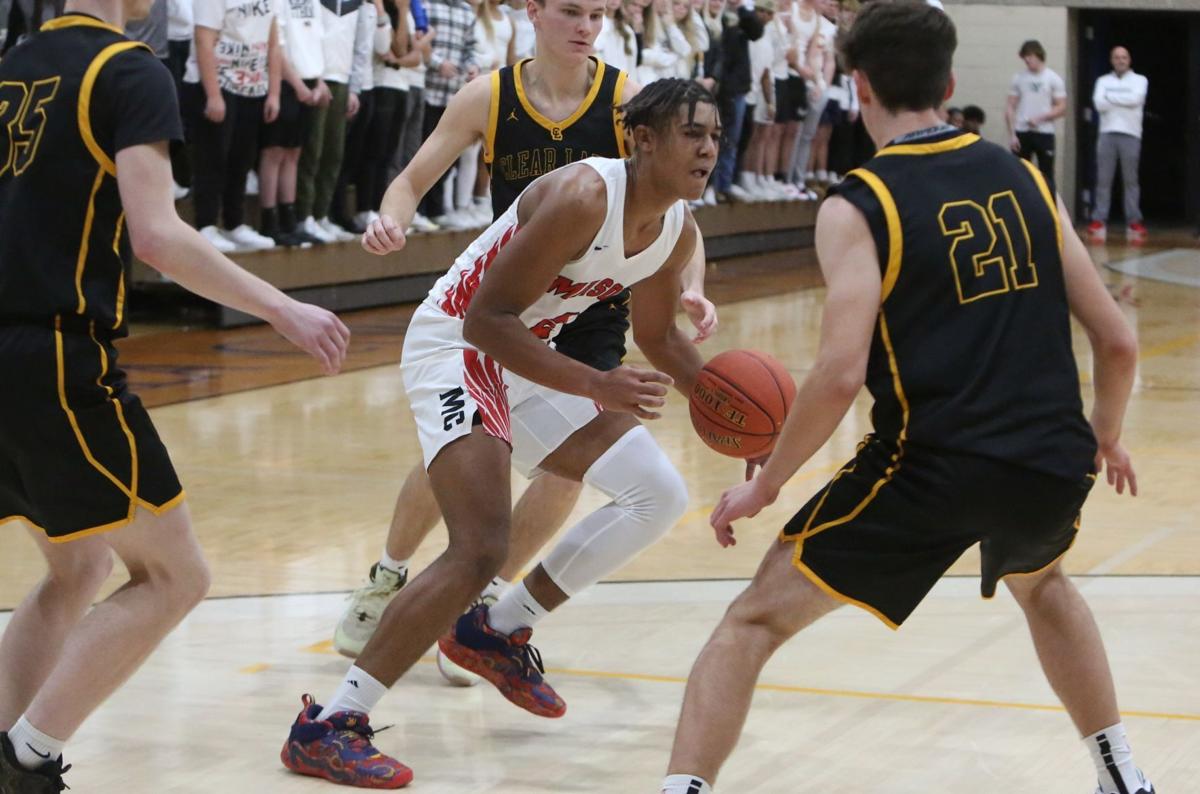 Mason City's Isaiah Washington (2) weaves his way around Clear Lake to make a shot at a game at NIACC on Monday.

Travaughn Luyobya had never been at the center of attention in a basketball game before Monday night.

He had missed three free throws, including two technical ones, in his previous two trips to the foul line. With two seconds left in regulation, he was at the line in a one-point game.

"This was the biggest stage I've been on, this type of opportunity," Clear Lake's junior guard said.

After making the first, Mason City called a timeout. Lions head coach Jeremy Ainley reiterated afterwards what he told Luyobya in that moment with the game tied at 47.

"I said 'This is your city, you live here. Let's nail these free throws' and I had no doubt he was going to make them," Ainley said. "He said 'I got these coach, don't worry.'"

Clear Lake, tied for sixth in the first edition of the Iowa High School basketball Associated Press poll, had taken just its third lead of the game and it proved to be the final won as its triumphed 48-47 over Mason City at North Iowa Area Community College.

"I went with confidence and didn't doubt myself," Luyobya said. "I would've gotten mad at myself, put my head down and think about those misses. That only brings you down if you think about that."

Mason City still had two seconds left to try a heave and a shot. Carter Thomas tossed it one-handed towards Isaiah Washington at half court, but the Lions batted it away and the buzzer sounded.

An emphatic celebration ensued on the Lions bench as they completed a comeback down by as many as eight in the second half.

"That was very fun, think that's a good way to put it," senior guard Carson Toebe said. "I'd say about every year we had an environment like this."

The final eight minutes was a back-and-forth tussle.

Corey Miner canned a 3-pointer to give Mason City, tied for 10th in the first AP poll in 4A, a four-point lead. Clear Lake answered with eight straight to lead by four.

After a block, Malakai Johnson-Bassey went coast-to-coast for the layup and then made the free throw for the 3-point play. After a couple minutes of no scoring, Toebe and Isaiah Washington exchanged go-ahead buckets.

Luyobya was fouled just as he crossed the half court line. The rest is history.

"It almost felt like a substate game," Ainley said. "The guys are living and dying on every possession. Let's soak this in."

Clear Lake (3-0) solved the riddle of the Mason City (2-1) defense in the second half. The Lions scored 31 points in the final 16 minutes compared to 17 in the opening half.

Toebe thinks it was also self-inflicted errors that caused the low-scoring affair.

"You guys can score," he said. "Just because we're on one of the biggest stages we'll have this year, doesn't mean you have to shy away from it. Go take charge."

Mason City head coach Nicholas Trask gave full credit to his defense that caused points to come at a premium.

"Our defense was the best defensive game we played this year," Trask said. "Coach Miner really got after them. We'll be really successful with the defense leading the offense."

Mason City went on an 11-3 run in the second quarter to turn a two-point lead into 10. It was led by 15 points from Washington and Thomas chipped in 12.

Yet what Trask remembers most from the game didn't happen on the court. It happened in the locker room after Mason City suffered its first loss of the season.

"We got guys taking responsibility, we got guys picking each other up. You don't get that out of high school boys and these guys were acting like an awesome family," Trask said. "We're stronger right now."

Meanwhile, Clear Lake has won two straight games by a combined three points. It is feeling a lot more confident about itself as it ramps up North Central Conference play this week.

Toebe finished with a game-high 22 points despite being in foul trouble late while Luyobya chipped in 11. Toebe also snared 11 rebounds.

"I'm proud of what we've been able to do," Luyobya said. "We haven't folded under pressure. We stuck together."

Clear Lake was down by three points and without its best player on the court entering the fourth quarter. The Lions role players found a way to weather the storm and come out on top.

Ball movement has been a key part in Jerry Gatton's guidance of Newman Catholic's boys basketball team. The Knights showed out just how unselfish they were on Tuesday.

Clear Lake's Thomas Meyer (21) looks to pass during a game against Mason City at NIACC earlier this season.

Clear Lake's Carson Toebe (5) drives the ball toward the basket as Mason City's Kale Hobart (10) closes in during a game at NIACC earlier this season.

Mason City's Isaiah Washington (2) weaves his way around Clear Lake to make a shot at a game at NIACC on Monday.