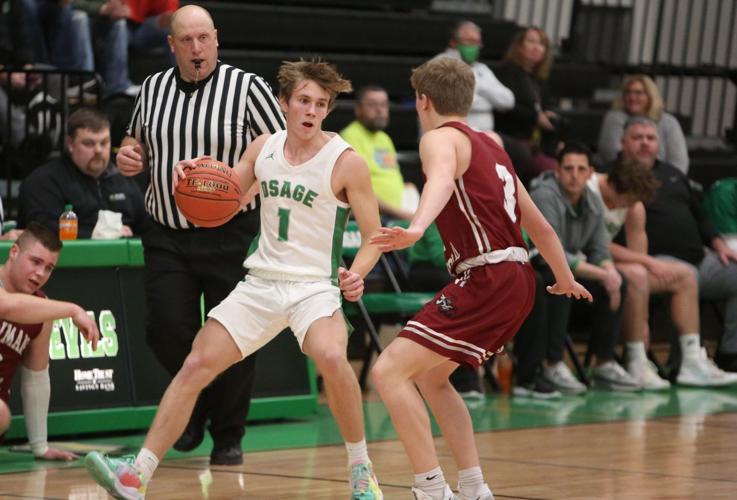 Tyler Oberfoell (1) looks for a way around Newman's Tim Castle at a game in Osage on Jan. 12. 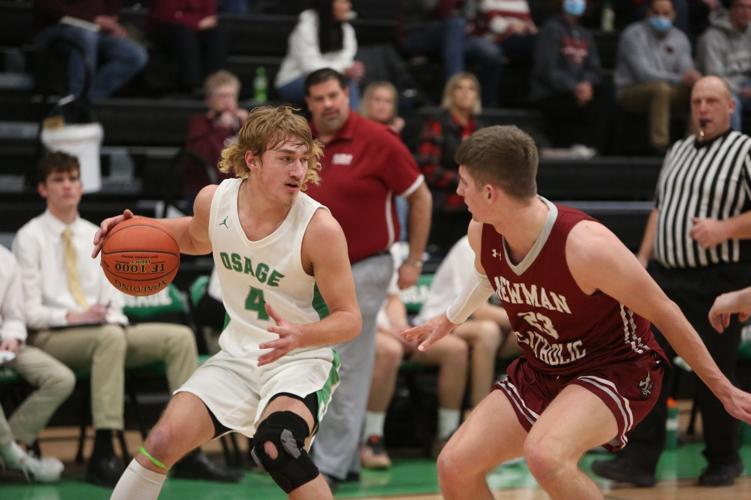 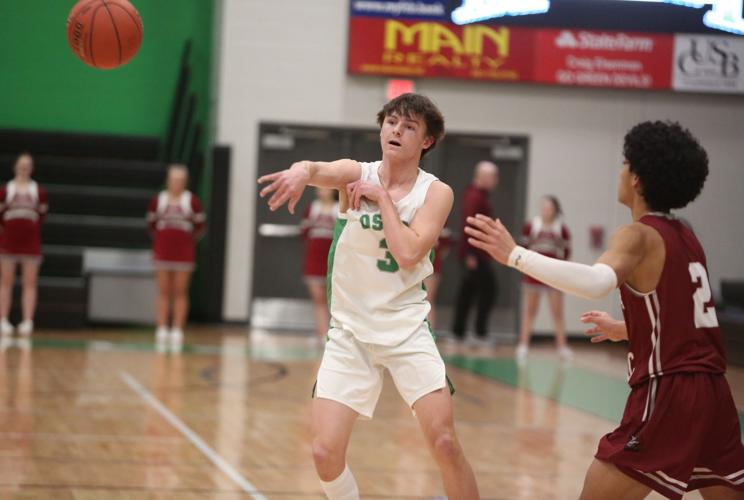 Osage has enjoyed rousing success in it's own gymnasium this season, starting off a perfect 7-0 and averaging over 60 points per home game. There's a familiarity to the rims and the environment.

It also helps to have three scorers that average 13 points a night on a consistent basis, which is what transpired on Tuesday night.

Nathan Havel, Tyler Oberfoell and Max Knudsen combined for 67 of the Green Devils 79 points in their biggest win of the season, edging Class 1A No. 7 Newman Catholic to get into a tie for first place in the Top of Iowa East standings.

"It is huge for us," Osage head coach Michael Brahn said. "If you want any chance of winning a conference title, we knew the game tonight was one we had to have."

Havel recorded a double-double with 27 points and 12 rebounds. Oberfoell buried five of his nine shots from beyond the arc for 25 points. Knudsen methodically pieced together 15 points and didn't miss a shot in the second half.

Those three are the second trio in the East to average double digit points.

"You look at our three-headed monster, I'd put them up with anybody," Brahn said.

Oberfoell and Havel have been playing basketball together since they were kids in the driveway. There was a year they didn't play together, when both were freshman and Havel was on varsity.

"That chemistry, it is fun," Oberfoell said. "When we were younger, we played every sport together. When we got on the same level, we've re-kindled."

They have made the last three years memorable with double digit wins each season. They have a chance for a ride to garner at least a share of a conference title.

If Osage wins out, it will win it's first league crown since sharing it two years ago with West Fork.

"We just can't let one go now," Oberfoell said. "We have to keep playing at the intensity we know we can play at and not settle."

The Green Devils haven't lost since a 50-49 setback to Hampton-Dumont-CAL over a month ago. That was the last time they scored under 50 points. In their last three games, they have scored 76, 82 and 79 points, all at home.

"The things we saw in that game, the way we saw some of our bench guys grow up and play some big minutes," Brahn said. "We talked about the fun and the joy it was to play a game at that level.

And the shooting percentages have been consistent.

Osage has shot under 40% from the field just once during its eight-game winning streak. It has made double digit 3-point shots in two of the last three games.

Oberfoell buried a couple from the wing against the Knights. There was a possession in the first quarter that the Green Devils had every player touch the ball and it led to a wide open shot from downtown off the hands of Knudsen at the top of the key.

The 85 made 3s by Osage is tops in the conference and no other team in the east is at 70.

"When you see the first one go through, all the jitters go away," Oberfoell said. "

"It is a combination of things," Brahn added. "Guys setting good screens, it is pushing the ball in transition getting a lot of easy looks that inflate that number. If it is not your night, there are other guys stepping up."

Osage has three of its next five contests on the road, including a matchup with 1A No. 4 Lake Mills and North Butler, the other team in the conference that is on a winning streak of at least two games.

The Green Devils don't plan to shy away from a business-as-usual approach for the final month of the regular season.

"You got to live in the moment," Brahn said. "You can't envision that end result until you make it happen."

WATCH NOW: Have Extra Cash at Hand? Here's What You Should Do With It

PennyGem’s Elizabeth Keatinge tells us what to do with extra cash.

Newman Catholic lost its first game of the season against Osage, but it could be a positive learning lesson for the seventh-ranked team in Class 1A.

There are four players for Mason City that are in the midst of complimenting its two stars. For Mason City to make a run in the next months, those four are hopeful to get hot at the same time.

Tyler Oberfoell (1) looks for a way around Newman's Tim Castle at a game in Osage on Jan. 12.