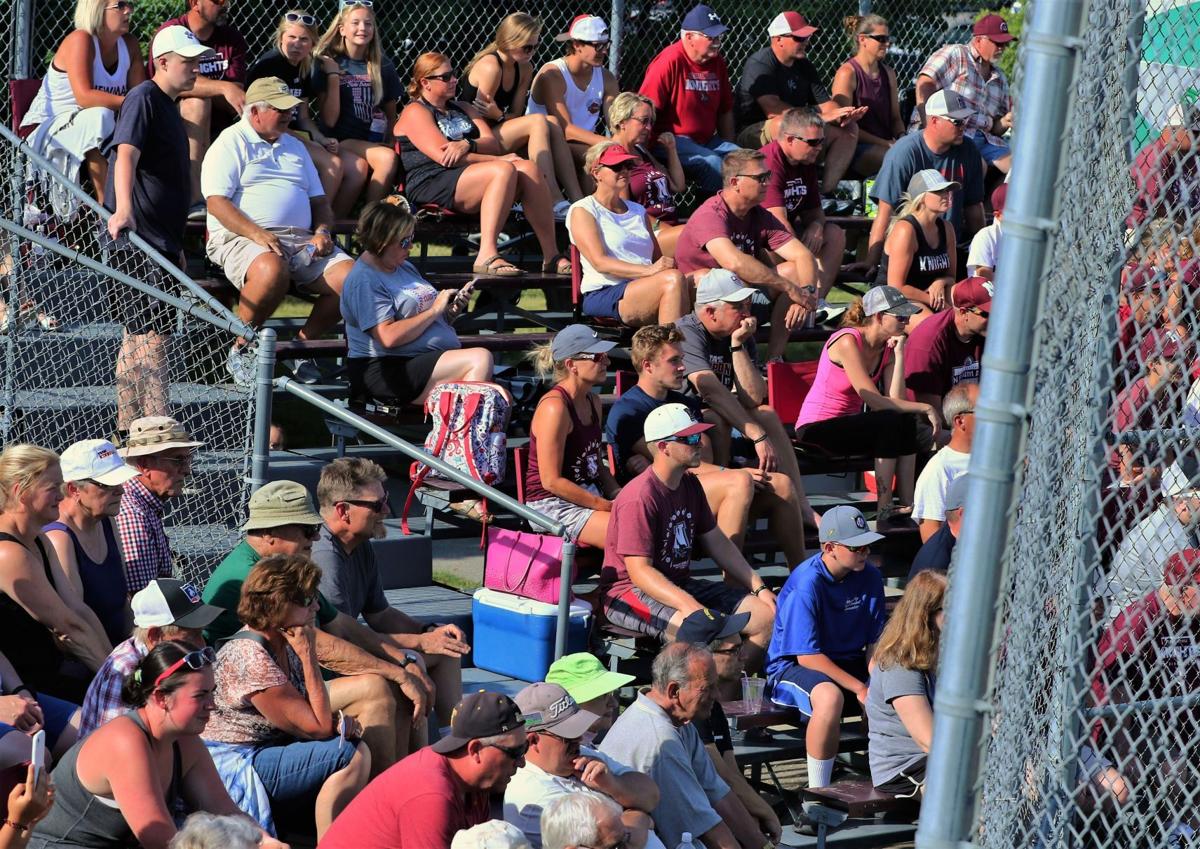 Fans of the Newman Catholic baseball team watch on as the Knights play Mason City on Sunday afternoon at Newman Catholic High School. The annual game between the two schools drew a near full house after not being played last season due to COVID-19. 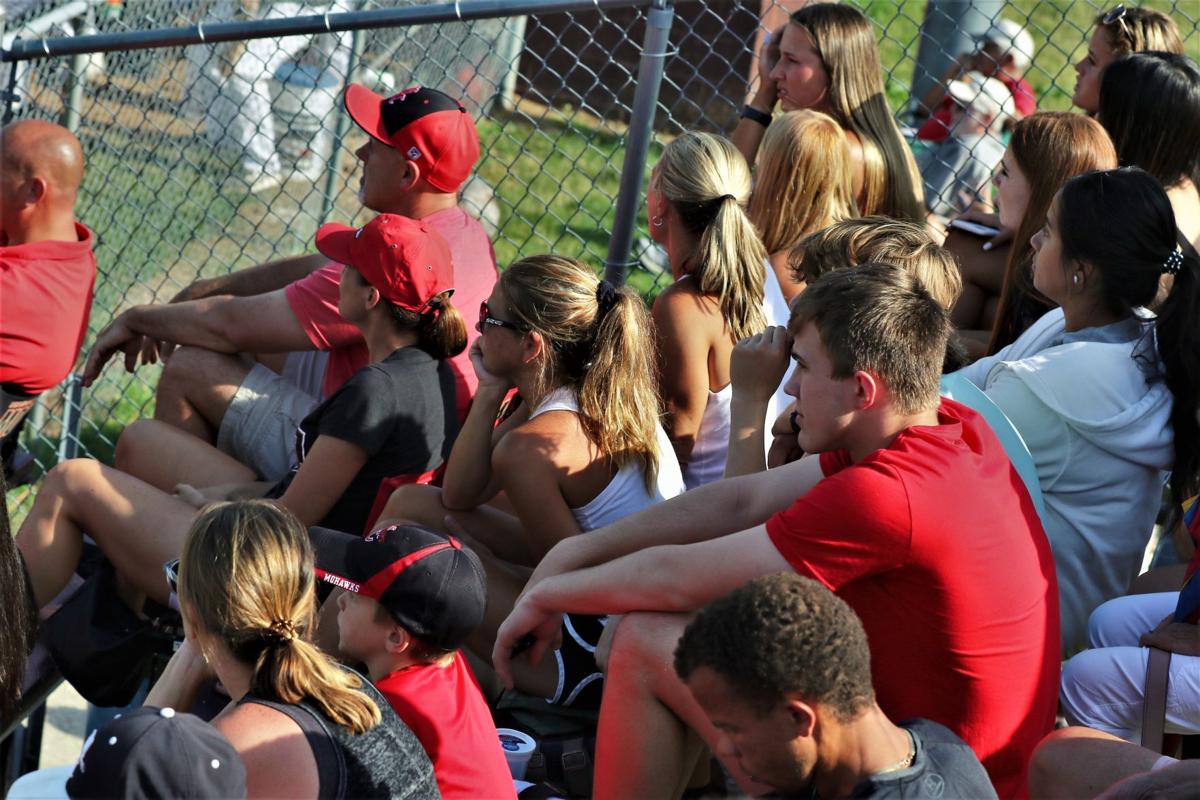 When you drove into the parking lot at Newman Catholic High School, finding a parking spot was a challenge.

There were very few empty seats in the bleachers. Even the seats scattered around the outfield were filled. On each side of the dugout, lawn chairs were aplenty.

There were smiles and laughs to be had. Conversations still buzzing even if there was a ping sound from a metal bat. No masks or social distancing to be found.

Sunday's rivalry contest between Mason City and Newman Catholic proved one thing to be true: Things are getting back to normal.

Since COVID-19 caused a condensed season in 2020, the game between the two inner-city schools wasn't played. So when the two teams took the field for warmups, they did it in front of a packed house.

"Everybody wants to play in this game growing up," Mohawks head coach Troy Rood said. "It was all it was hyped up to be. Great entertainment, they showed class with each other to the very end. That's how it should be in an inner-city rivalry.

Two years ago, the game that is annually played on a Sunday afternoon was also held at Newman Catholic. Carter Thomas, now a junior, remembers the atmosphere that day as a freshman.

Did this top it?

"There had to be at least 100-200 more people," Thomas said. "This felt like the baseball I remember before coronavirus. It was really fun to play in. It gives you the jitters."

Everyone that showed up were dazzled by a pitching duel between two aces in Doug Taylor and Alex Gold. They combined for 25 strikeouts in 13 2/3 innings pitched between the two.

And the ending wasn't too bad either.

The Knights' leadoff hitter Jack Maznio scored the walk-off run in the bottom of the ninth to give them a 3-2 triumph for win No. 24 on the season.

"We have such great baseball in Mason City, everyone in this town loves baseball," Newman Catholic starter Doug Taylor said. "It is nice to have that many people and feel normal. We definitely wanted to win this one."

That full house of a crowd, in Maznio's eyes, may have led to a pair of errors in the top of the first inning that allowed Mason City to grab an early 1-0 advantage.

The junior center fielder didn't beat around the bush.

"A lot of people here and it's obviously a big game. A lot of people from Mason (City) and other towns come out to watch this game," Maznio said. "This is the regular season game everyone looks forward to. It made it feel the way it should be."

There's a reason why Newman Catholic head coach Alex Bohl and Rood fight to play this game. Both wanted to have it a season ago, but the stars didn't align.

To them, this game only makes each other better.

"It's always fun seeing the big crowd, the energy," Bohl said. "That's what baseball is all about."

The Knights remain the top team in the latest Class 1A rankings, a perch they haven't fallen off of in a few weeks. Their lone loss so far is to Class 4A No. 5 Dowling Catholic.

They will likely enter district play as the top seed. Potential substate final opponents could be South Winneshiek, ranked in the top-10 for part of the season, or conference foe St. Ansgar.

"We love seeing the best and that's going to make us better," Bohl said.

Mason City sits at 16-10, which would put them currently as a second seed in its substate by virtue of record behind the Maroons. That would net it at least two postseason games at home.

"I'm often asked 'Why do you play this game? It's a no-win situation?' That's not how we see it," Rood said. "We know it's going to make us better."

NFL Futures: Any value on Jets or Falcons after an 0-2 start?

NFL Futures: Any value on Jets or Falcons after an 0-2 start?

Bennett Suntken had struck out four times. He was far from a threat for Newman Catholic in the batting order on Sunday.

Mason City's baseball team didn't feel anything different prior to a May 31st game against Des Moines North. What it didn't know was that it was about to erupt offensively.

The roster for the Clear Lake softball team states Chelsey Holck as the lone senior. She doesn't feel alone.

Ian Collins left no doubt who was the best jumper in Class 3A. Abigayle Angell was a favorite in the Class 2A discus and walked away with a st…

Fans of the Newman Catholic baseball team watch on as the Knights play Mason City on Sunday afternoon at Newman Catholic High School. The annual game between the two schools drew a near full house after not being played last season due to COVID-19.