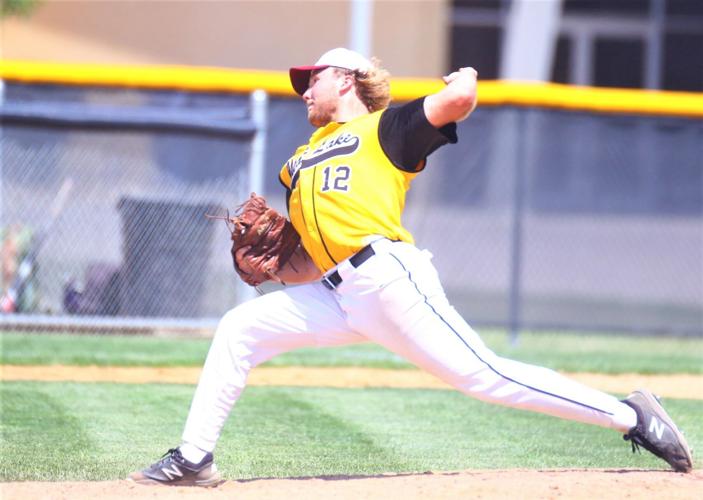 Clear Lake's Jett Neuberger winds up from the mound during Small Schools East's 10-3 victory over Large Schools West in the 2022 IHSBCA All-Star Series at Roosevelt Field on Sunday. 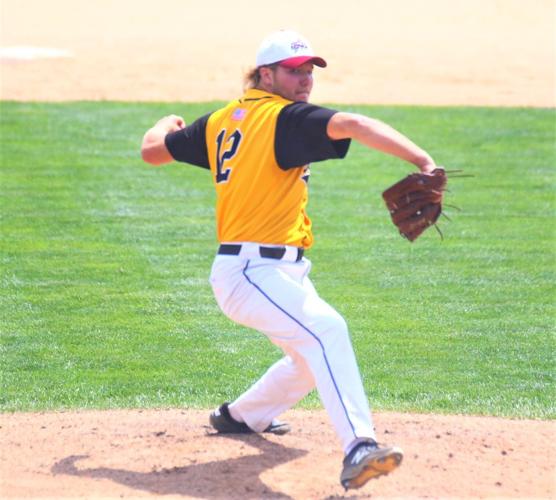 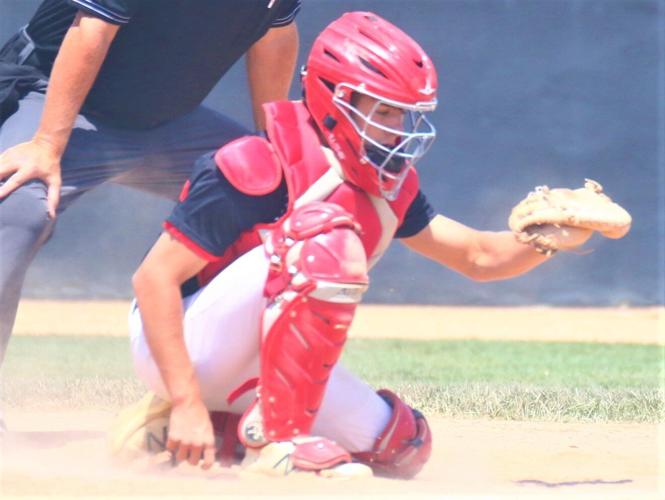 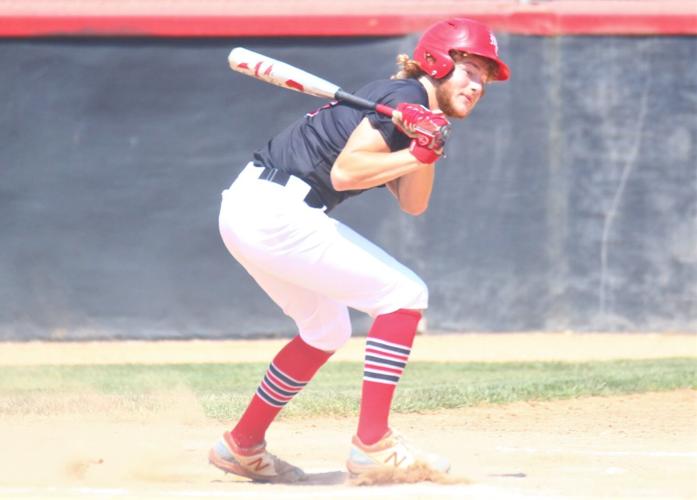 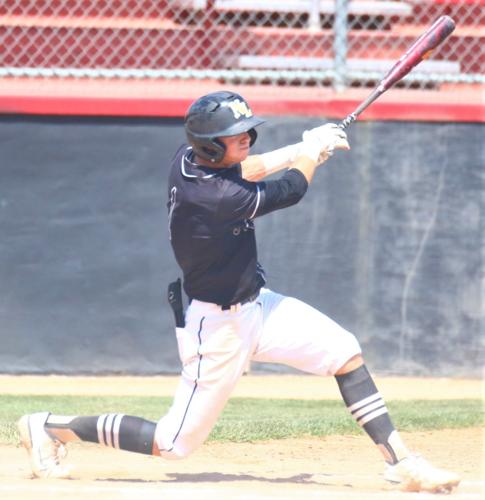 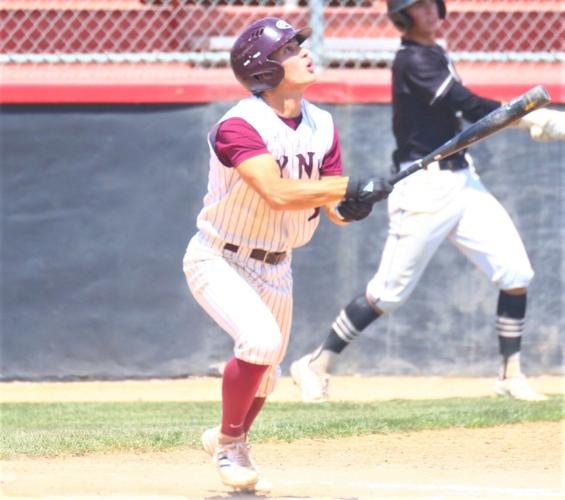 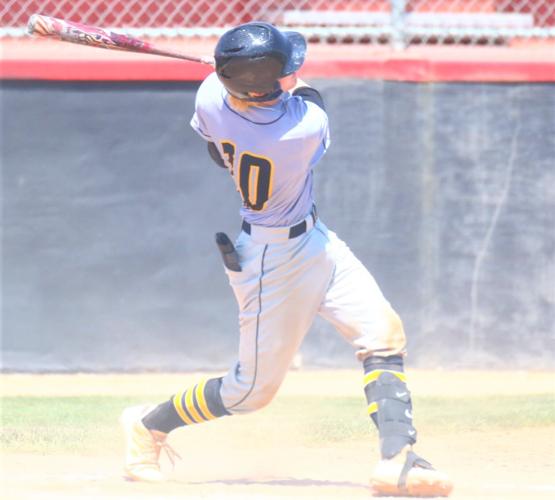 Sunday was for the small schools.

Throwing Clear Lake's Jett Neuberger, the Lion tossed a one-two-three top of the first before his offense gave him some immediate support.

With a 3-0 cushion in the top of the second, Neuberger ran into a bit of trouble. Fort Dodge's Jace Ulrich got on base with a single, then after a groundout Boone's Evan Behn reached on a walk. Shortly after, Indianola's Kasey Carter record a sac-fly RBI.

While Bondurant-Farrar's Jake Edenburn was at the plate and Behn was at third, a balk from Neuberger allowed Large Schools West to cut the deficit to one.

"I think I was a little rusty," Neuberger said. "I haven't ever stopped pitching, but I haven't pitched to a catcher for about three weeks. I think that was a little tough to start with, but I eventually found my fastball and curveball again."

The offense had Neuberger's back once more, piling on three more runs in the second, with New London's Tucker Gibbar recording an RBI single.

Allowing one more run in the third on an RBI single from Lewis Central's Britton Bond, Neuberger went on to pitch six and two-thirds innings while allowing no more runs and striking out seven.

His offense tacked on four more runs in the fifth to give the team a 10-3 lead, which held for the final score, with Schulte hitting an RBI sac-fly and Wulf hitting a two-RBI single as part of the frame.

Neuberger can get used to the mound at Roosevelt Field, as he'll be playing for NIACC in college.

"The first time I pitched here it was our first game of the year for high school ball, and I didn't do too good," he said. "I felt a lot more comfortable here this week and I definitely did a lot better, too. It's a good feeling."

When it comes to familiarity with Roosevelt Field, there's nobody more comfortable than Mason City's Carter Thomas and Cooper Wiemann.

Both playing the last games of their high school careers as members of the Large Schools West team, the senior duo got to spend some extra and  unexpected time together after their season ended a few weeks ago.

"Being able to play with Carter one last time since we've been playing with each other since we were four or five years old, it was really special," Wiemann said.

Getting to don the red and black one more time at "The Velt" made the situation even more memorable.

"I loved it," Wiemann, a NIACC wrestling commit, said. "Three weeks ago when I walked out of the clubhouse, I thought that was gonna be the last time. Then I got the call from Coach (Blake) Utley, and instantly I said yes. Why not? I thought it'd be a great experience and it was."

The honor of playing in the series felt like a reward for all the years of hard work that came up to this point for the senior catcher.

In fact, even being a catcher is something that Wiemann never expected, let alone playing in a senior all-star series as one.

Playing at home caused a bit of reflection for the senior as he reminisced on the journey to get to this point.

"Just thinking back to sophomore year, before the season started I was expecting to just sit and watch varsity," Wiemann said. "Then we had our catcher quit, Coach Rood asked me to be the catcher, and since then I've worked pretty hard at it."

Following the game, Dubuque Wahlert's Aaron Savary was named Small Schools East MVP, Fort Dodge's Jace Ulrich was named Large Schools West MVP, and Keota's Colten Clarahan and Lewis Central's JC Dermody were recipients of a scholarship award from Gary and Sandy Nyhus, who are both from Mason City and have served as members and event staff workers for the IHSBCA for 45 years.

It is a trait very few have. In today's ever-changing world of shifting allegiances and transfer portals, it is almost non-existent.

Cochran steps down at Camanche

Citing a desire to spend more time with his family, Darryl Cochran is stepping down from his role as the head baseball coach at Camanche High School after 23 seasons.

Clear Lake's Jett Neuberger winds up from the mound during Small Schools East's 10-3 victory over Large Schools West in the 2022 IHSBCA All-Star Series at Roosevelt Field on Sunday.