June 3rd was the last time the Class 2A 11th-ranked Warhawks (13-1) didn't win with a shutout. Since then, they've rattled off seven straight.

Outside of the 10 runs given up to No. 1 Central Springs, West Fork hasn't allowed an opponent to score more than three in a game.

Putting together a run differential of 110-19 to this point of the season, Newman Catholic was the latest victim of the West Fork lockdown on Monday.

The Warhawks scored two runs in the first and added another in the fifth to earn a shutout victory over the Knights (15-7) by a score of 3-0.

JoAnna Wallace had all three RBIs for West Fork, tallying two hits with one of them being a triple. Libby Trewin tossed seven innings from the circle, allowing just two hits and striking out five.

Ellyse Ball and Macy Kellar had the only two hits for Newman Catholic. Madi Elwood pitched a complete game, giving up three runs (all unearned) and striking out two.

With a rematch against the Panthers coming up on Wednesday, the Warhawks will face a serious test to see if they can continue the streak.

Ankeny 4-13, Mason City 0-0: The Class 5A No. 14 Hawks shutout Mason City (6-15) in both games of a Monday night doubleheader. Using two runs in the fourth and two in the seventh and game one, and erupting for 13 runs in the first four innings in game two, Ankeny is tied with Centennial for third in the CIML-Iowa standings.

Adyson Evans was the most productive River Hawk offensively, collecting three hits with two of them being doubles.

Iowa Falls-Alden 3, Hampton-Dumont-CAL 2: The Cadets used a two-run second and tacked on one more in the sixth to get the win against the Bulldogs (6-9).

No stats were published online for HD-CAL.

Central Springs 9, Osage 0: The Class 2A top-ranked Panthers (18-1) used five runs in the third and four runs in the fourth to shutout the Green Devils (16-4).

Cooper Klaahsen was lights out from the circle, tossing seven innings of two hit, eight strikeout ball. No stats were published online for Osage.

Osage 8, Lake Mills 7: In Osage's second game of the night, it was able to grind out a win against the Bulldogs (8-5).

After going down 7-5 in the top of the fifth, the Green Devils responded in the bottom of the frame with three runs to take the lead. That lead held for an 8-7 win.

No stats were published online for Osage.

St. Ansgar 6, North Butler 5: The Saints (14-6) walked things off against the Bearcats, scoring two runs in the bottom of the seventh to claim a 6-5 win.

Josie Juhl knocked in two runs on two hits, and Mallory Juhl and Makenna Norby each contributed an RBI.

Josie Juhl also went the distance from the circle, giving up five runs (three earned) and striking out 10.

Belmond-Klemme 14, Garner-Hayfield-Ventura 5: The seventh inning was the only one the Broncos failed to score in as they took down the Cardinals (6-7) at home.

Payton Harle led GHV offensively with three hits, falling a triple shy of the cycle and cranking a home run while driving in three.

Jailyn Krein contributed two hits and an RBI, and Kate Hejlik accounted for the remaining RBI for the Cardinals.

North Union 19, West Hancock 0: The Class 2A second-ranked Warriors won a three-inning contest against the Eagles (0-17), scoring six runs in the first and second and seven runs in the third.

No stats were published online for West Hancock.

Class 4A No. 8 Ankeny scored three runs in the top of the seventh in game one and locked down in the bottom half of the inning to win 6-3.

Justyn Rivera accounted for the lone RBI for Mason City in the game. Carter Thomas led the team with two hits.

The Hawks were propelled by a 10-run first in game two, adding on two more in the second and fifth. The River Hawks fought back to score 10 runs in the fourth through the sixth, but ultimately fell short.

Thomas knocked a triple and a double to the tune of four RBIs, and James Fingalsen knocked in a couple on a two-RBI double. Kaden Tyler led the team in hits with three.

Payton McNealy had himself a day, cranking two homers to the tune of three RBIs. Cal Heeren and Tommy Birdsell each had two triples and three RBIs.

No stats were published online for either team.

Osage 5, Lake Mills 3: In the second game of the day for the Green Devils they were able to hold on for a win against the Bulldogs (2-10).

Scoring two runs in the first and second innings and adding on another in the fourth, the Lake Mills' bats woke up for three runs in the fifth. That was all it could manage, though, as Osage won the contest 5-3.

Hayden Brua, Brady Hanson and Eli Menke each had two hits for the Bulldogs.

No stats were published online for the Green Devils.

Newman Catholic 10, West Fork 0: The Class 1A second-ranked Knights (21-3) were able to get a run in the bottom of the sixth to defeat the Warhawks (2-12) in six innings.

Nash Holmgaard and Elijah Brinkley each had two hits and two RBIs for Newman Catholic. Max Burt put on a show on the mound, pitching all six innings and allowing just two hits while striking out 13.

No stats were published online for West Fork.

Rockford 8, Northwood-Kensett 7: It was a back and forth affair between the Warriors (9-8) and the Vikings (0-12), with Rockford holding on for an 8-7 victory.

Getting out to a two run lead in the top of the first, Northwood-Kensett responded immediately with two runs of its own in the bottom frame. The game went on much like that until the Vikings scored three runs in the bottom of the fifth to tie the game at six.

In the top of the sixth, the Warriors scored two and only allowed the Vikings to get back one in the bottom of the frame. That 8-7 score held in the seventh inning.

Kolton Lyman led Rockford offensively with a homer and four runs-batted-in. Nic Groven also had two hits and an RBI.

No stats were published online for Northwood-Kensett.

St. Ansgar 7, North Butler 1: The Saints (13-7) scored four runs in the bottom of the sixth to extend their lead to six and put the game out of reach against the Bearcats.

Tommy Miller pitched five innings, allowing four hits and one run while striking out seven. He also helped his own cause at the plate with three hits and one run-batted-in.

Rylan Barnes had two hits and two RBIs for the Eagles, and Zack Beukema also knocked in two on one hit. Braden Walk and Levi Eckels accounted for the other two runs-batted-in. 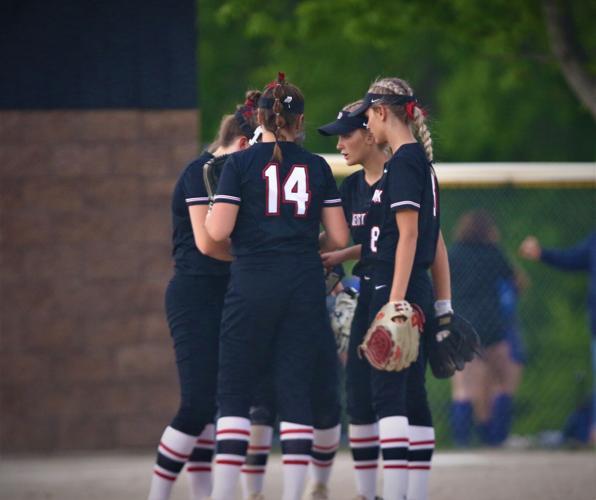 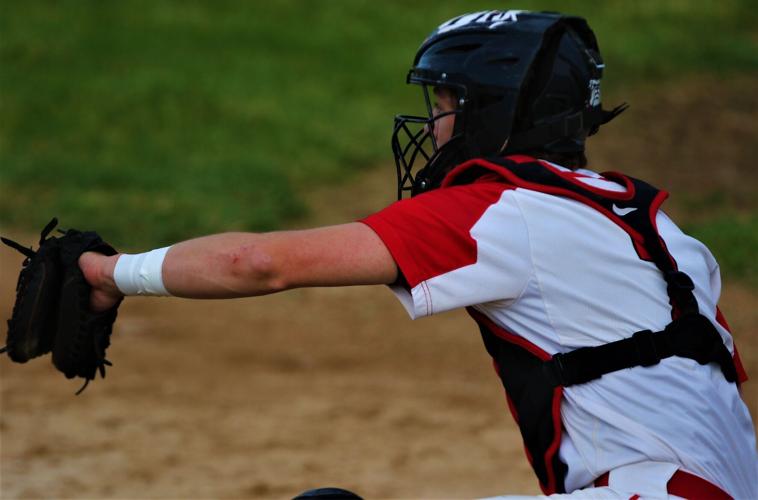 Hampton-Dumont-CAL senior Cal Heeren gets ready to catch during the Bulldogs 3-1 loss to Humboldt on Monday in Hampton.