After a win against West Fork back on June 1st, Central Springs head coach BJ Fessler talked about how the team plays tough tournaments so that they can be ready for the postseason, as the Ballard Tournament was coming up that weekend.

The Class 2A top-ranked Panthers (17-1) did it once at the Fort Dodge Tournament on Friday and Saturday, going 3-1 with wins against Atlantic, Columbus Catholic and Cedar Rapids Kennedy. The lone loss came against Class 5A No. 12 Ames in the team's first game on Friday.

Suffering its first loss of the season to the Little Cyclones, the Central Springs was knotted up at five after scoring three runs in the bottom of the fifth. In the top of the sixth Ames scored three runs of its own, and that score held to produce a final of 8-5. Kaylea Fessler and Madisyn Kelley each had two RBIs in the game, with Kelley's coming on a homer.

From that point on, all the Panthers did was win.

Scoring 13 runs within the first two innings against Atlantic, Ashlyn Hoeft, Aurora Stepleton and Abby Pate each cranked home runs to lead Central Springs to a 13-3 win over the Trojans. From the circle, Klaahsen pitched four innings and struck out nine on just two hits.

In game one on Saturday against Columbus Catholic, the Panthers got off to a good start with one run in the first and two more runs in the third. They went on to win the game 6-1, with the lone run for the Sailors coming in the seventh.

Lizzy Hamand and Kelley each had two RBIs in the game, and Klaahsen threw six shutout innings, striking out eight.

In the second game on Saturday and the final game overall for Central Springs, it used a four-run second inning and another run in the third to defeat Cedar Rapids Kennedy 5-3.

Freshman Kaci Crum hit the first home run of her young career on a solo shot, and Fessler, Hoeft and Carly Ryan each knocked in a run of their own. Klaahsen continued to be a workhorse, pitching all six innings and allowing three runs (two earned) and striking out two.

Things aren't getting any easier for the Panthers this week, as they play important games against Osage, West Fork and North Union.

Newman Catholic Classic: The Knights (15-7) went 2-0 in Mason City on Saturday, with wins coming against Hudson and Madrid.

In game one against the Pirates, Newman Catholic needed just one run in the sixth to claim a 1-0 victory. That run came on a sacrifice RBI by Madi Elwood, and the shutout was due to a complete game from Macy Kellar, in which she allowed seven hits and struck out five.

Game two against the Tigers saw a lot more scoring from the Knights, as they were boosted by an eight-run first on their way to an 11-1 win.

Elwood led the team with three runs-batted-in in the game, and Emma Weiner and Avah Hanig each knocked in two.

Leah Martinez pitched all five innings from the circle, giving up one run (unearned) and striking out seven.

West Hancock Weekend Tournament: West Hancock (0-16) finished a game against Eagle Grove that was suspended in the third inning last week as part of a semi-doubleheader against the Eagles on Saturday.

Falling 15-5 in the first game and 18-2 in the second, Dru Hagen contributed a homer and three RBIs in game one and Payton Whipple led the team with three hits against Eagle Grove overall.

West Hancock also fell 7-1 against Manson-NW Webster in an afternoon game, with its lone run coming in the fifth inning. Kamryn Eckels and Jade Cook each had two hits in the game.

Eagle Grove 6-6, West Hancock 2-5: The baseball side of things for West Hancock (5-8) also had a doubleheader against Eagle Grove due to a weather postponement last week.

In game one, Eagle Grove scored two runs in each of the third and fifth innings on its way to a 6-2 win. Both of the runs for West Hancock came in the fifth inning.

Game two was a heartbreaker for West Hancock, with Eagle Grove walking off in the bottom of the 11th to win 6-5. West Hancock had scored a run in the top of the seventh to tie things up at five and ultimately send the game to extra innings.

Rylan Barnes, Levi Eckels and Dylan Smidt each collected an RBI for West Hancock on the day, with Barnes, Eckels and Logan Leerar being the only players to record two hits over the course of the day. 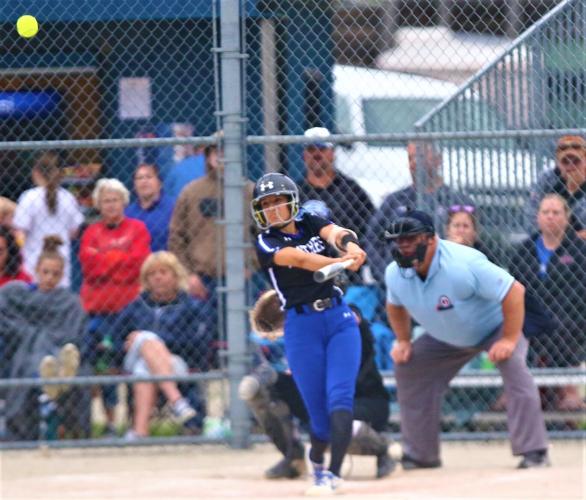 Central Springs junior Abby Pate blasts a two-run homer to center field in the sixth inning of the No. 1 Panthers' win over West Fork in Manly earlier this season. 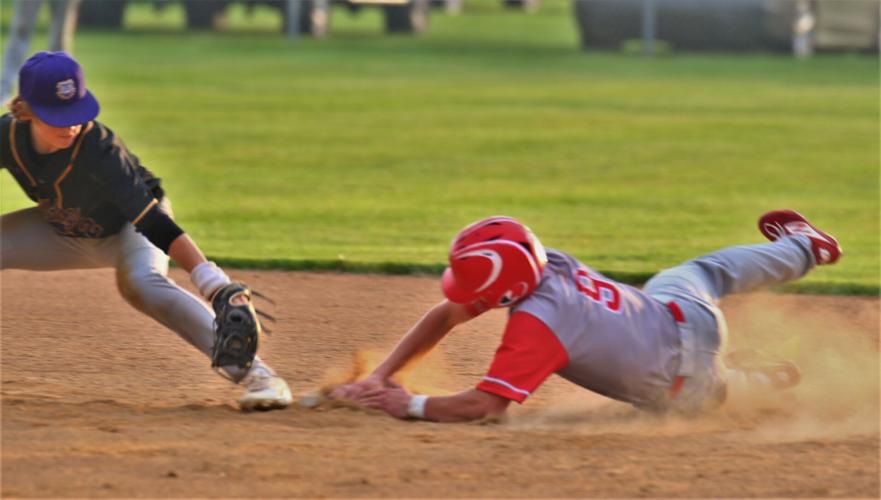 West Hancock's Logan Leerar slides into second base and avoids the tag from Lake Mills' Hayden Helgeson during a Top of Iowa West contest at the Lake Mills Sports Complex.