VIDEO: Globe Gazette's Lisa Grouette heads around town to revisit some of the spots where Mason City residents could rent movies, games, and even video equipment.

It’s scuffed and beat up, and if you found it somewhere, you wouldn’t give a second thought, save for the dozens of signatures covering the rusty hull.

It probably would just sit gathering dust, if the thing wasn’t so treasured by a group of local high school athletes.

What is it? It’s the Clear Lake tool box.

The idea for the Clear Lake tool box started four years ago, the brainchild of head boys basketball coach Jeremey Ainley and his son, Jordan. Jordan, a Miami Hurricanes fan, saw the “Turnover Chain,” a sapphire covered necklace that is given to Hurricanes’ football players who force a turnover during games, and suggested that the coach do something similar for his team.

Based on that, Ainley came up with the tool box. It’s not quite as flashy as the turnover chain, but it signifies the hard work that Clear Lake players are expected to put into the program, which Ainley calls a “hard-hat mentality.”

After a night where they put in a particularly gritty effort, a player gets the honor of adding their signature alongside the Lions’ stars of years past.

“The hardest working player after we win gets it,” Ainley said. “It’s not the best player, it's the guy that had an impact on the game, defensively, and really brought a hard-hat mentality to the game.”

As a team that has made it to the state tournament and a substate final in the past two years, the Lions have put a lot of signatures on the tool box. Zach Lester was a frequent winner in his senior year of 2017-2018, and in the past two years, Jaylen DeVries, Carson Toebe, and Andrew Formanek have taken up a significant amount of space on the silver and rust-red splotched surface.

The inside of the box has its own treasures, typically a Gatorade and a pack of Sour Patch Kids for the player who proved their worth on the floor that day.

This season, Toebe has signed the Tool Box three times, and estimates that he has added his name close to 10 times in his 2 1/2 seasons on the roster. The competition is a little more open now, with former Lions’ rebounding machine Jaylen DeVries off playing football at Southern Illinois University.

“Jaylen DeVries would win that thing every game last year,” Toebe said. “He would come home with 20 rebounds.”

There are plenty of special moments that are memorialized on the tool box. Lester’s 1.000th career point is there from Jan. 8, 2018, along with signatures from the run to the state semifinals in 2019, the program’s first state tournament appearance in 40 years.

But as Ainley said, it’s not just the star players that get to sign. Ainley’s own name appears on the crowded back side of the tool box, courtesy of a late-game defensive call. Members of the scout team have won for preparing the team especially well for an opponent. Occasionally, the bench or the entire team wins the honor. One mystery player is represented by an all-caps signature that says “The Big Diesel.”

On Saturday, junior Jagger Schmitt got the honor, thanks to his defensive performance in the final minutes of the game against Forest City senior Noah Miller. Miller scored 21 points in the game, as Forest City battled back from a 15-point deficit to pull within five late in the game. In the end, the Lions held on to beat the Indians, 62-54.

“He really kind of took him away a little bit,” Ainley said. “He denied him the ball and forced him into some tough misses. He got some loose balls, and that is why he won it today. That last four minutes, he really locked in and got us to the win.”

Senior Andrew Formanek also put up a big performance, with 26 points and 17 rebounds to his name.

Formanek estimates that he has signed the tool box 10-15 times over the past four years. For him, it’s always a special honor to add his name, and look back at the signatures of his former teammates.

With certain names come memories that he won’t ever forget.

“It started my freshman year, so looking at that, it brings back some good memories,” Formanek said. “I can look at my first ever game. I remember who won it, Zach (Lester). Just seeing all the past players that have come through, and the state ones, it just brings back a ton of memories.”

With plenty of space remaining for future victories, the tool box is here to stay. Don’t even think about suggesting an investment in a shiny, new model. There are no plans to replace it anytime soon. It looks old and worn out, but in a way that only the most beloved objects become.

“The more beat up, the better it looks and the better it is,” Ainley said. “That’s been our mantra here, especially the last five or six years. Outworking our opponent, and bringing that hard hat mentality every day.”

Should there be concern around the Yankees?

Should there be concern around the Yankees?

The specific suit has been joined by counties across the state. The building price is about $250,000.

After eight consecutive victories from the Clear Lake boys' basketball team, the sportswriters of Iowa had little choice. The Lions are finall…

'They're battle-tested:' Johnson and Bobinet have Osage girls flying high

When Danielle Johnson and Ellie Bobinet are on the floor, anything seems possible for Osage.

This weekend, Iowa’s female high school wrestlers will gather at Xtream Arena in Coralville, for the third annual Iowa Wrestling Coaches and O…

Clear Lake girls up to No. 4 in latest IGHSAU rankings

Sometimes, a bounce-back win means everything to a struggling basketball team. 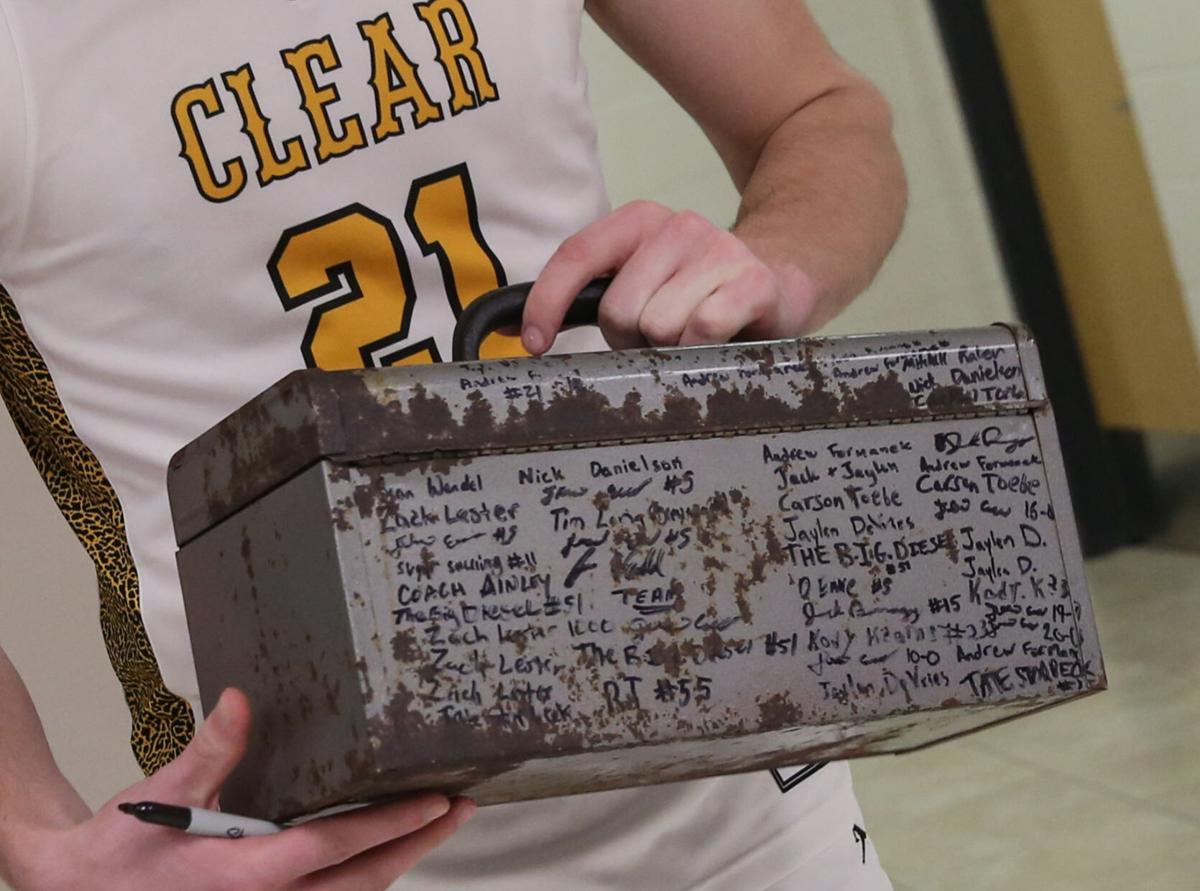 Clear Lake senior Andrew Formanek holds the tool box signed by players who were recognized for their hard work during games. 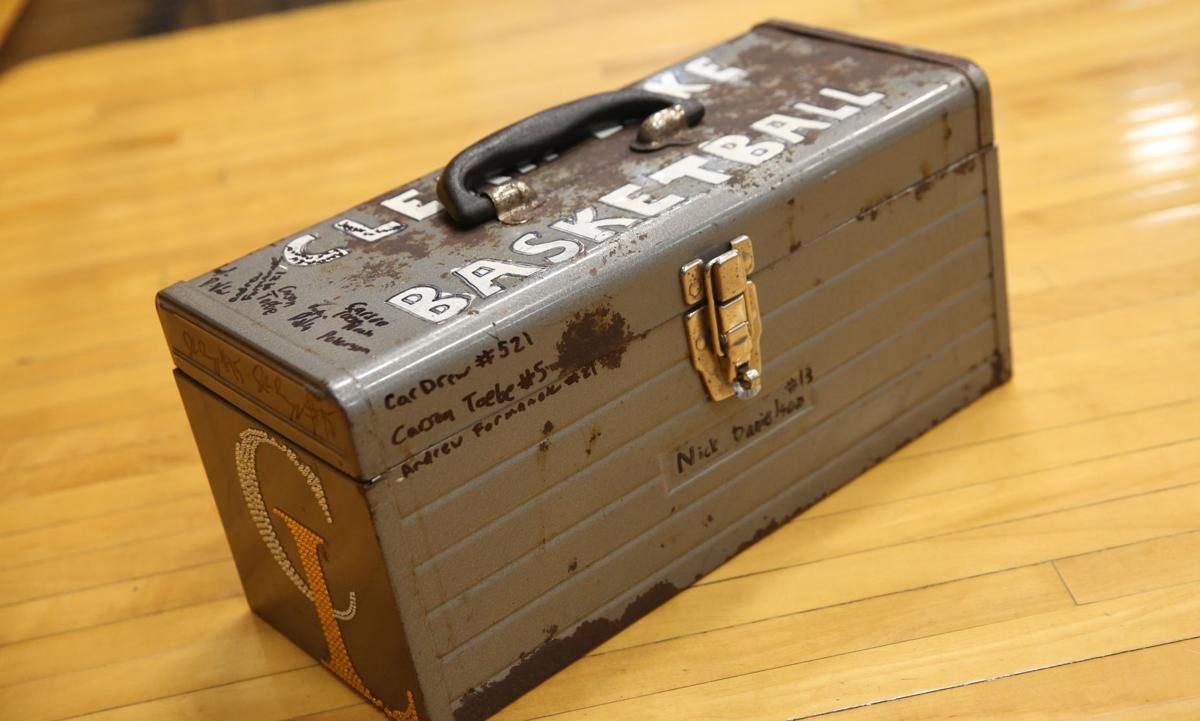 Clear Lake boys basketball players who are recognized for their hard work during a game sign their names on a toolbox as part of a four-year team tradition.