The 2020 volleyball season came to a close in triumphant manner for North Iowa this past week, with Osage pulling off a long-awaited Class 3A state championship, the first in program history. With that win and subsequent celebratory dog-pile, the Green Devils brought the season to an uplifting ending for area fans.

We were lucky to have a season at all. Amid the COVID-19 pandemic, there was plenty of uncertainty and doubt regarding the return of indoor sports. But with most teams and fan bases willing to take precautions, the year was able to conclude, and a local team was crowned as champion.

It's time now for that sign on the outskirts of Osage that trumpets the 1992 Osage girl's basketball state championship to be repainted, and updated with a record of the 2020 volleyball teams' accomplishment.

Now that the volleyball season is done, it’s time for the Globe Gazette to name its All-Area Team for 2020. There are surely a few deserving athletes that are not named here, but we have put together a list that we feel recognizes the best of the best of this season's North Iowa volleyball scene.

The Green Devils 6-foot-1 hard hitter proved herself to be a fearsome player for opposing teams to face. Johnson finished the season with 355 kills, tops on a Green Devils team that placed second in Class 3A with 1,166.

Not only a force on offense, Johnson finished third on the team with 30 blocks on the year, and placed second with 226 total digs. She also led the team with 52 aces, eighth-best in the state.

Johnson also became the school’s all-time leader in kills earlier this season, and was named the Class 3A state all tournament team captain after her 16 kill performance in the Green Devils’ 3-0 win over Mount Vernon in the state title game.

The standout setter was a key cog in the dominant machine that was the Osage offense. After breaking out in last year’s 44 game season with 1,189 assists, Bobinet put up 952 in 34 games this year, fourth-most in the state, and second in Class 3A. Bobinet had assist totals of 38, 44, and 39 in the state tournament, which earned her a spot on the Class 3A state all-tournament team.

Greenfield has been the Bulldogs’ leading scorer since breaking into the starting lineup her sophomore year, and turned in yet another sterling season in 2020, and brought her team to the brink of the state tournament. Greenfield finished her senior season with a team-high 302 kills, which ranked No. 16 in Class 2A. Greenfield also led the team with 168 digs, and placed third on the squad with 20 blocks. Her 67 serve aces were tied for seventh best in the state. Greenfield will play volleyball next season at UW-Platteville.

Moen performed extremely well in her first season as the team’s full-time setter. Moen had 631 assists on the year, along with 14 blocks, 127 digs, and 37 aces. Moen’s assist total was the 11th best in Class 2A.

Hackbart finished with a Saints’ high 192 kills, was third on the team with 192 aces, and also led the squad with 41 aces. On a team with plenty of offensive threats, Hackbart proved to be the linchpin, as the Saints made it all the way to the regional finals, where they fell to Wapsie Valley, 3-0.

Dillavou, one half of the Indians’ dynamic offensive front-line duo, proved herself to be an elite player this season, turning in a team-high 227 kills, while finishing second on the team with 188 digs. The fearsome presence of Dillavou and senior Kaylee Miller on opposite ends of the front line led the Indians to the Top of Iowa West title, a 21-10 overall record, and a matchup against Osage in the Class 3A, Region 5 title game.

Miller was a fiery and fearsome presence on the front line this season for the Indians, finishing with 210 kills, 183 digs, and 54 blocks, along with 26 aces. Miller was a four-year starter for the Indians, and was the team’s emotional leader on the court. Miller and Dillavou became a highly-effective duo on the front line, with the two finishing 36th and 33rd overall in Class 3A kills.

Caylor essentially had one job for the Indians, and she did it extremely well. Caylor finished the season with 400 digs, the ninth most in Class 3A. Caylor led the team in digs in each of the past three seasons, and set a new career high in 2020. For her defensive contributions, Caylor was named to the Top of Iowa West All-Conference First Team.

Coleman was the most complete player on the Central Springs roster this season, finishing at or near the top in nearly every statistical category. She led the team with 172 kills, 73 more than her closest teammate. On defense, she had 295 digs on the year, second only to junior Zoey Francis, who had 343. Coleman also had 23 aces on the season, and helped lead the Panthers to a 13-12 season, which ended in the Class 2A, Region 5 quarterfinals.

Stock was an offensive force for the Comets, leading Charles City with 191 kills, 28 aces, and 59 blocks on the season. Her all-around talents helped lead the the Comets to an 8-4 conference record and a spot in the regional semifinals.

Maloy excelled on defense for the Comets, with 384 digs. There is something to be said for doing one job and doing it well, as Maloy finished tied for the ninth-most digs of any player in Class 4A.

PLAYER OF THE YEAR

TEAM OF THE YEAR

Osage – It’s pretty hard to top a state championship. After making it to the state semifinals in three straight seasons and falling short, the Green Devils’ senior-heavy group finally came out on top with a 3-0 win in the state finals over Mount Vernon. The win was the first title in program history. After a 34-2 season and a trophy to show for it, the 2020 Green Devils are a squad that will be remembered for a long time to come.

West Hancock head coach Mark Sanger couldn't be any more proud of his football team, even though the Eagles fell short of defending their Clas…

Mason City diver Rosa Monarch may have been the first member of the Mohawks swim and dive team to qualify for the state meet this season, but … 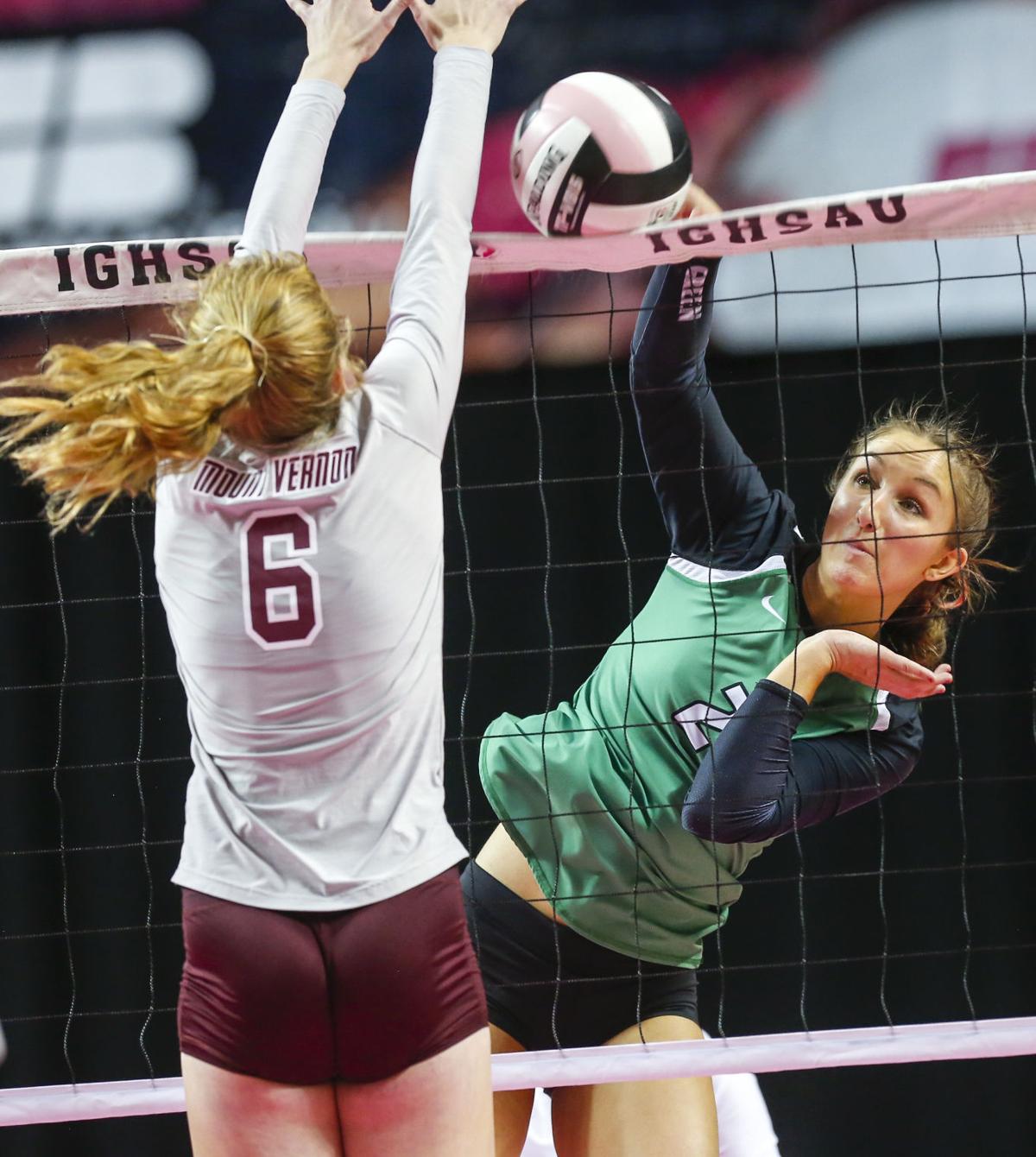 Osage senior Danielle Johnson spikes the ball over the net against Mount Vernon Thursday during the Class 3A state championship at the Alliant Energy PowerHouse in Cedar Rapids. 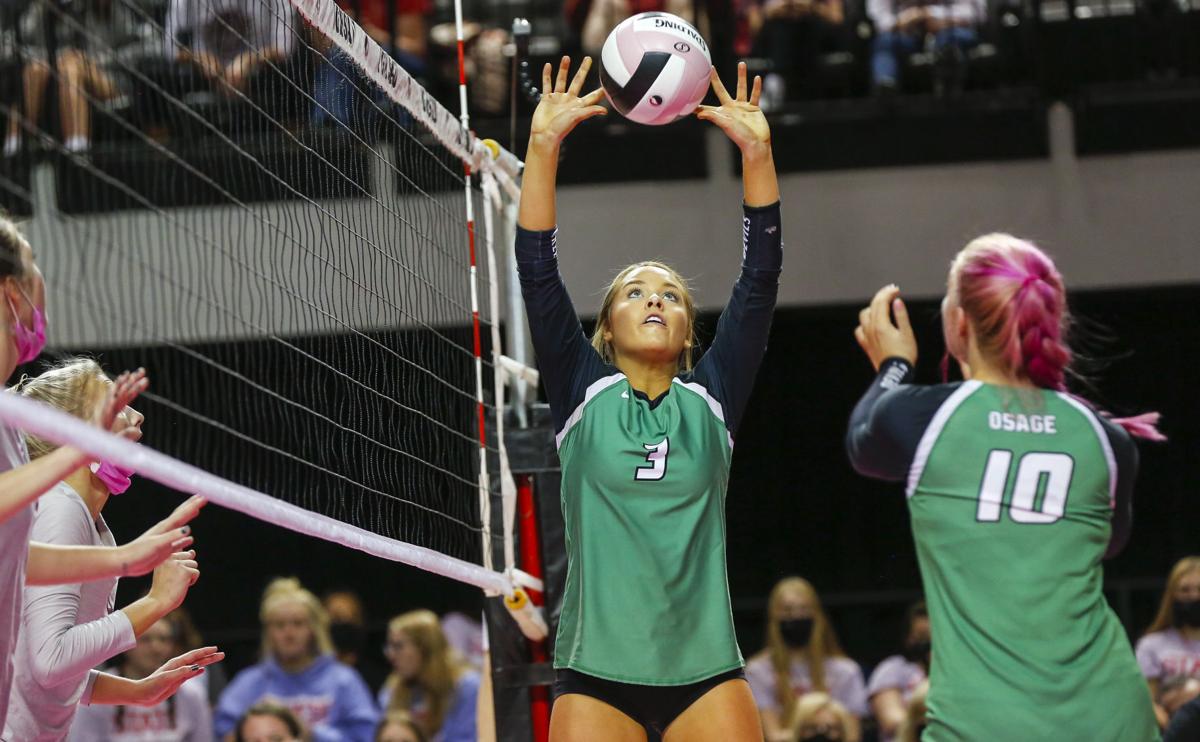 Osage senior Ellie Bobinet sets the ball against Mount Vernon on Thursday during the Class 3A state championship at the Alliant Energy PowerHouse in Cedar Rapids. 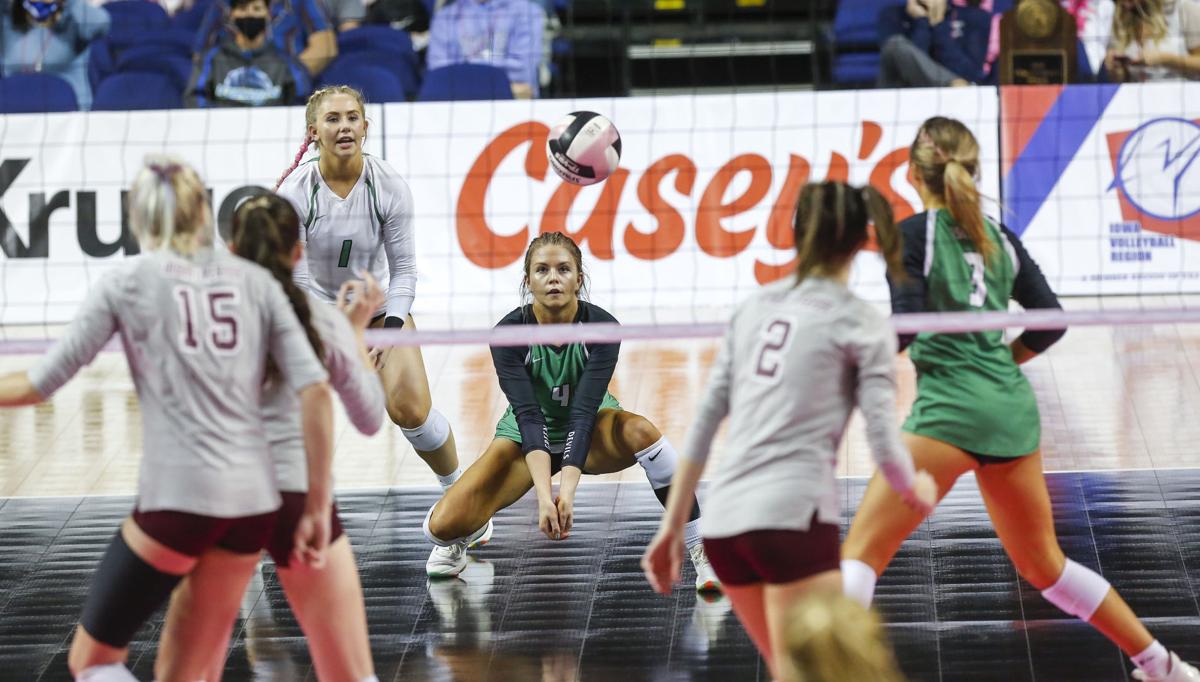 Osage senior Paige Kisley gets a dig against Mount Vernon Thursday during the Class 3A championship round of the state volleyball tournament at the Alliant Energy PowerHouse in Cedar Rapids. 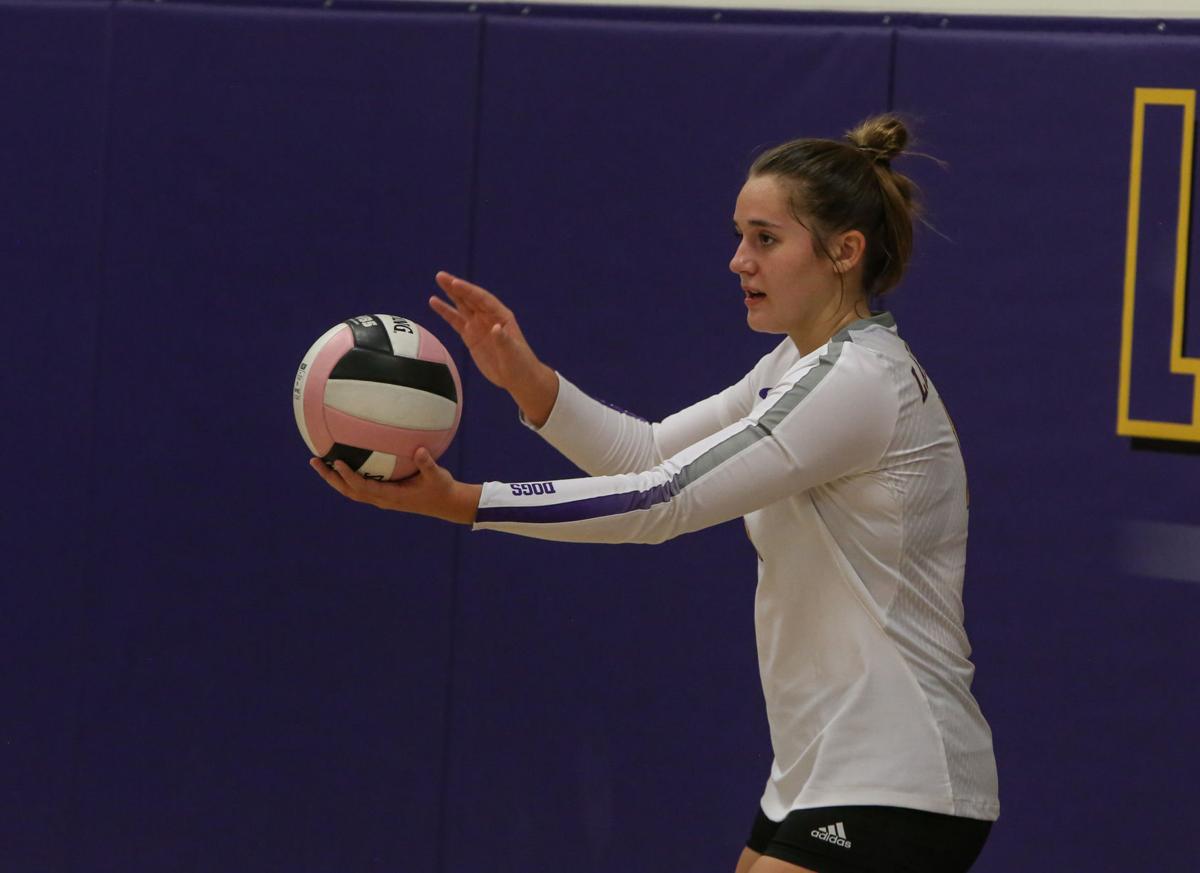 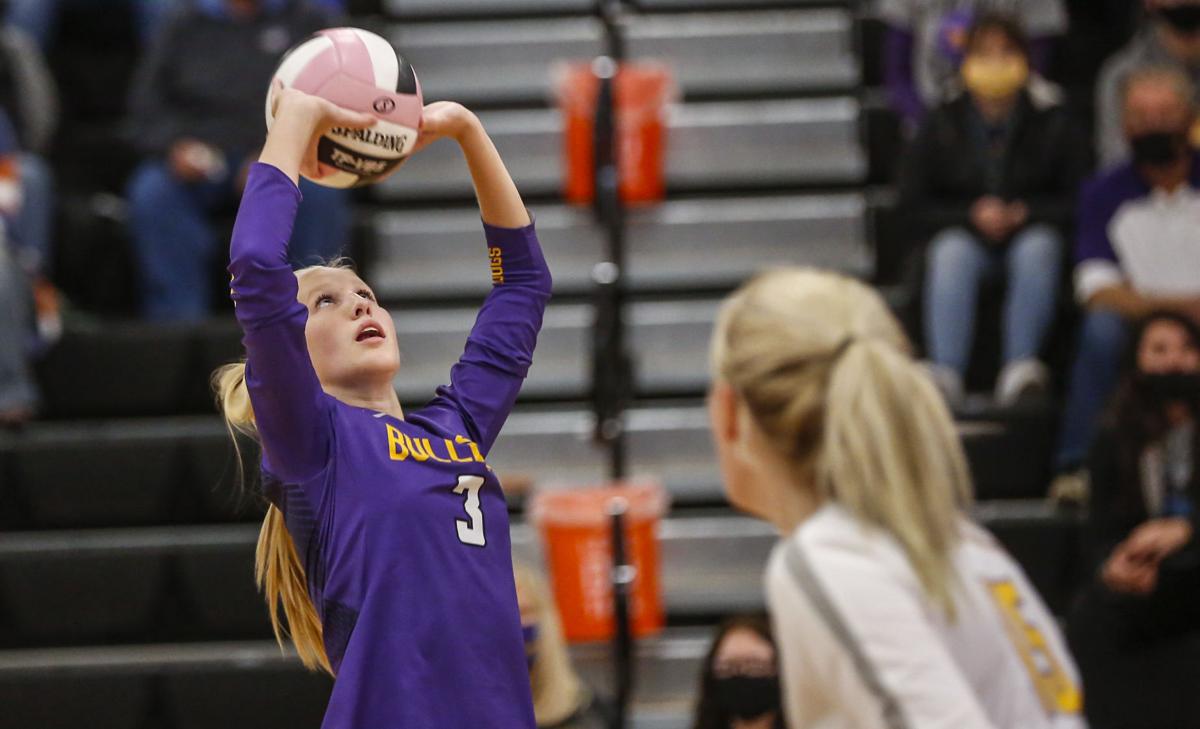 Lake Mills junior Leah Moen sets the ball against Dike-New Hartford on Oct. 28 during the Class 2A Region 5 championship at Charles City. 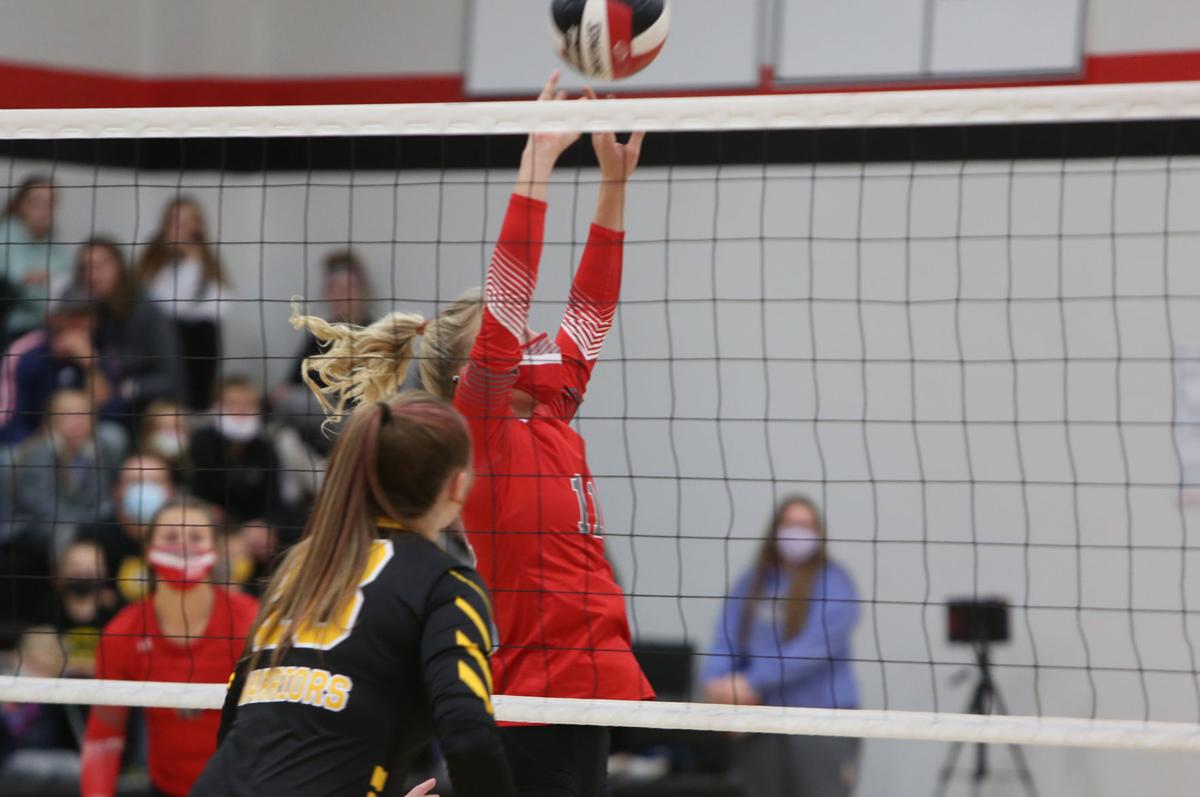 Hali Anderson sets the ball at the regional finals against Wapsie Valley in Nashua on Oct. 28. 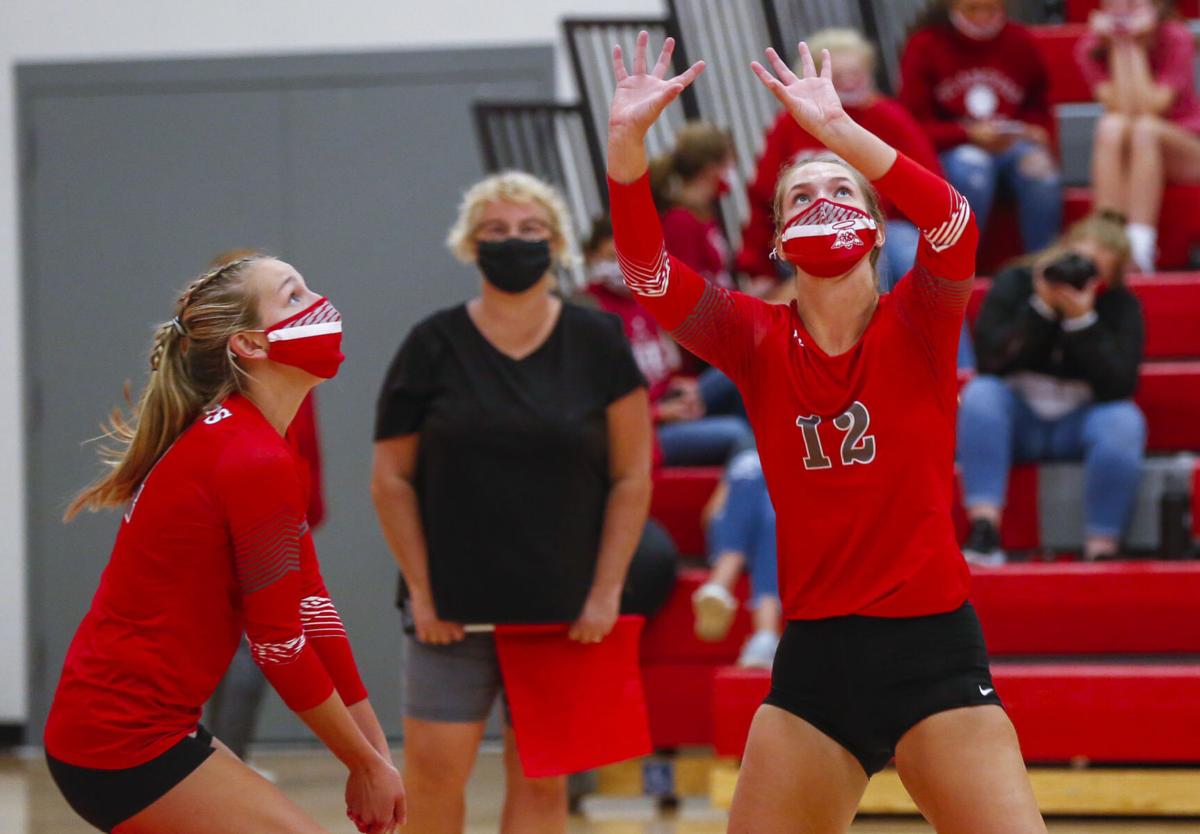 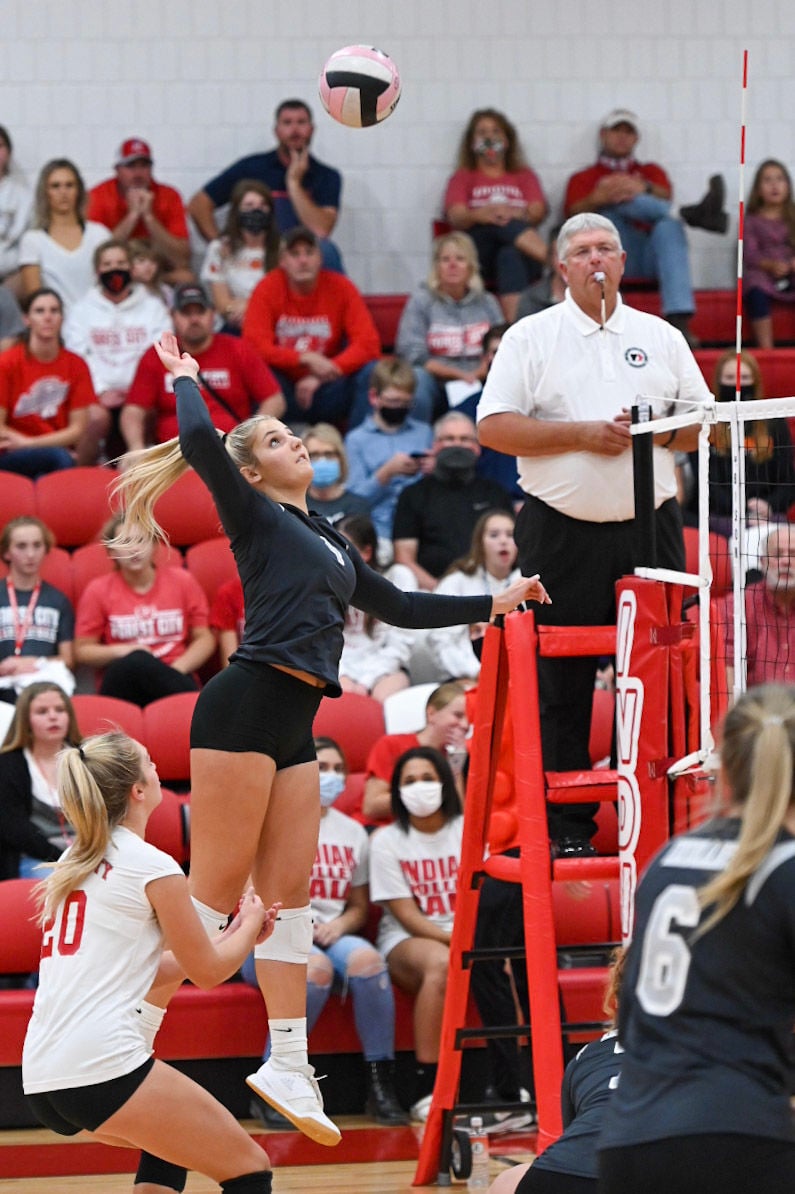 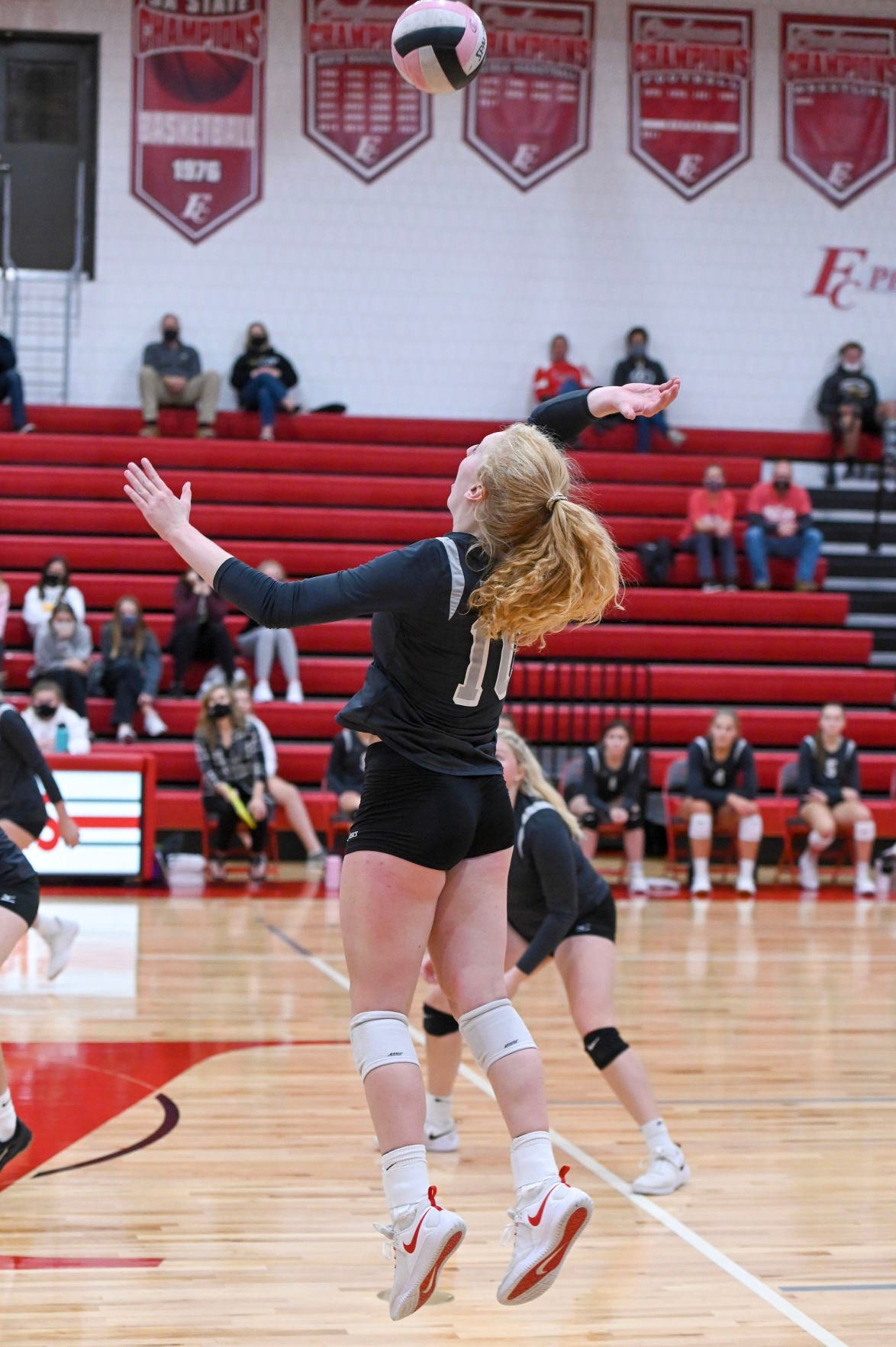 Forest City senior middle hitter Kaylee Miller gets set to return a shot against Clear Lake earlier in the season at home. 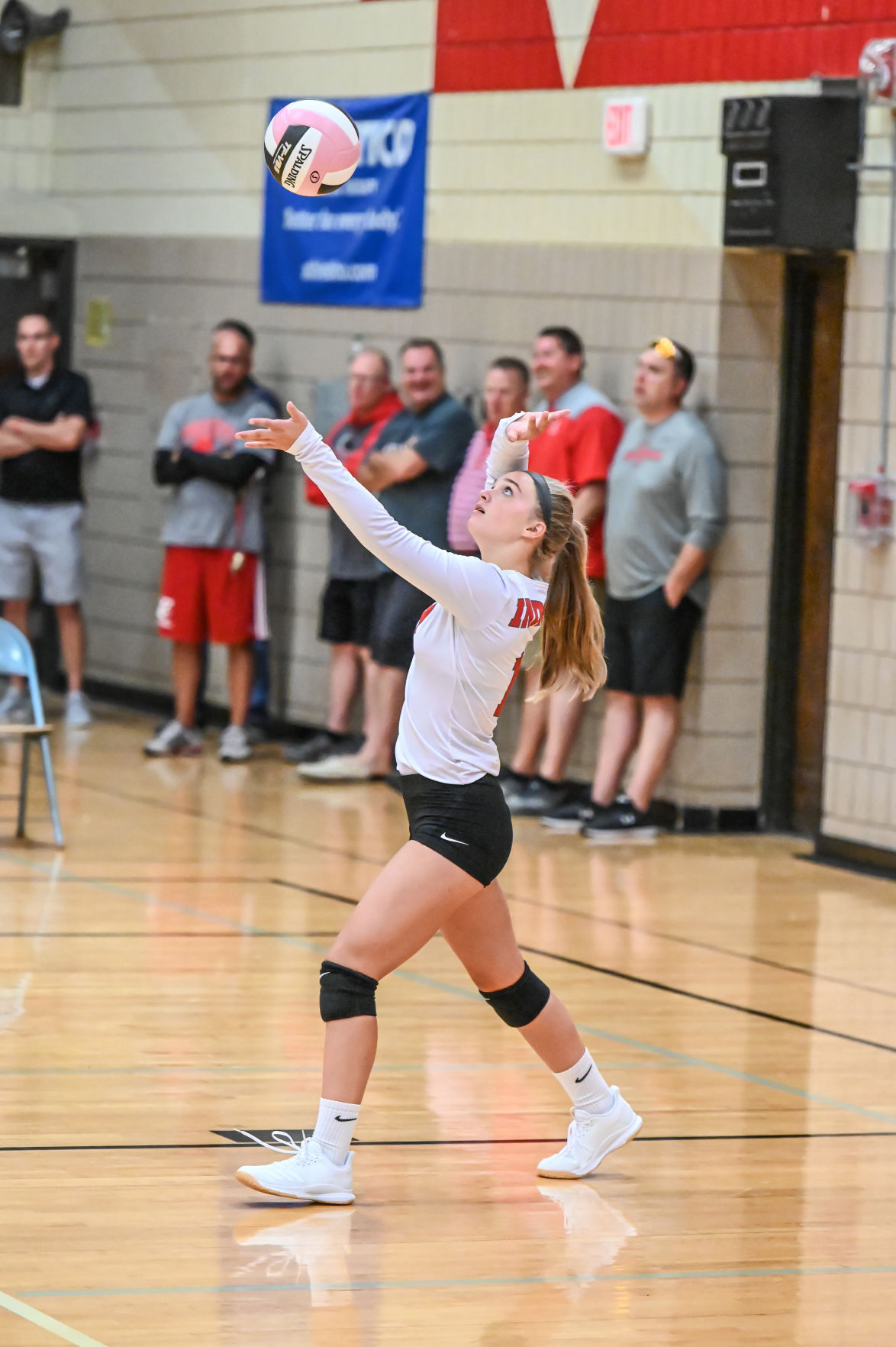 Ellie Caylor serves for the Indians in a 2019 match. 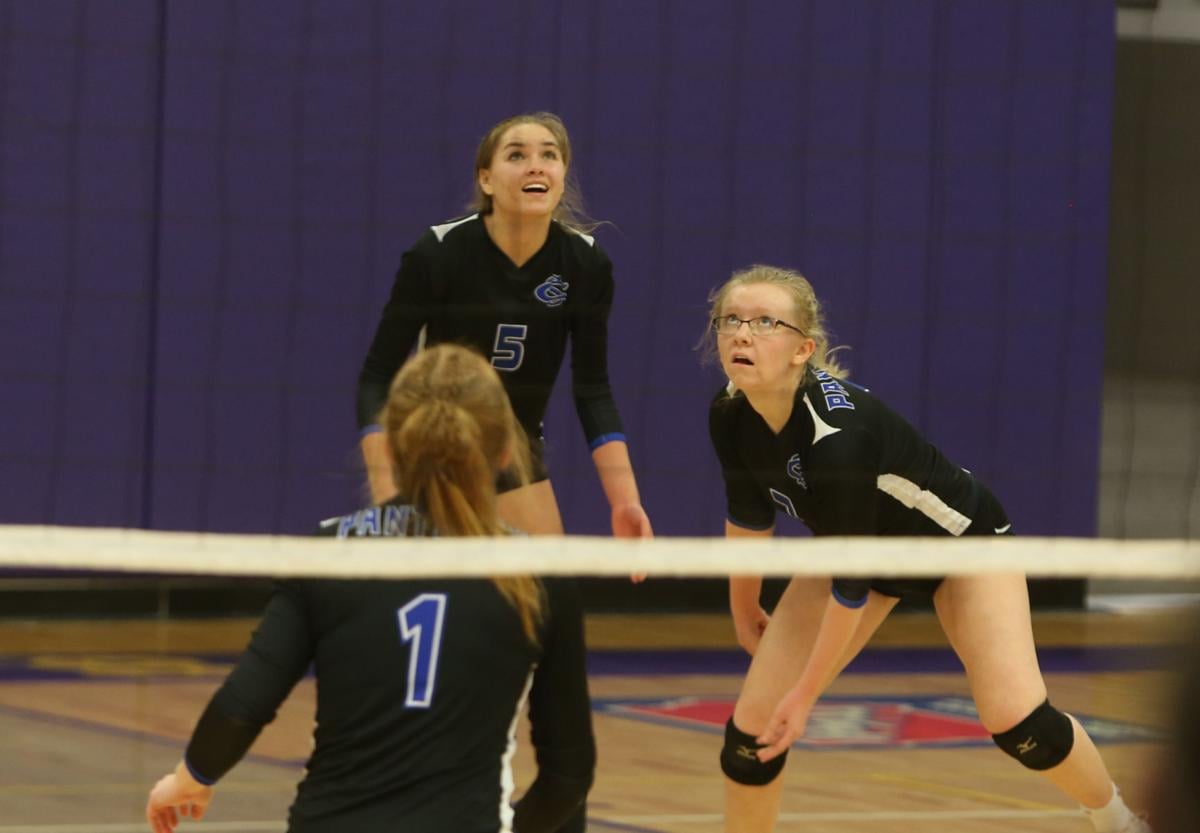 Central Springs senior Ellie Coleman (5) watches the ball in flight in a game against Lake Mills on Oct. 21. 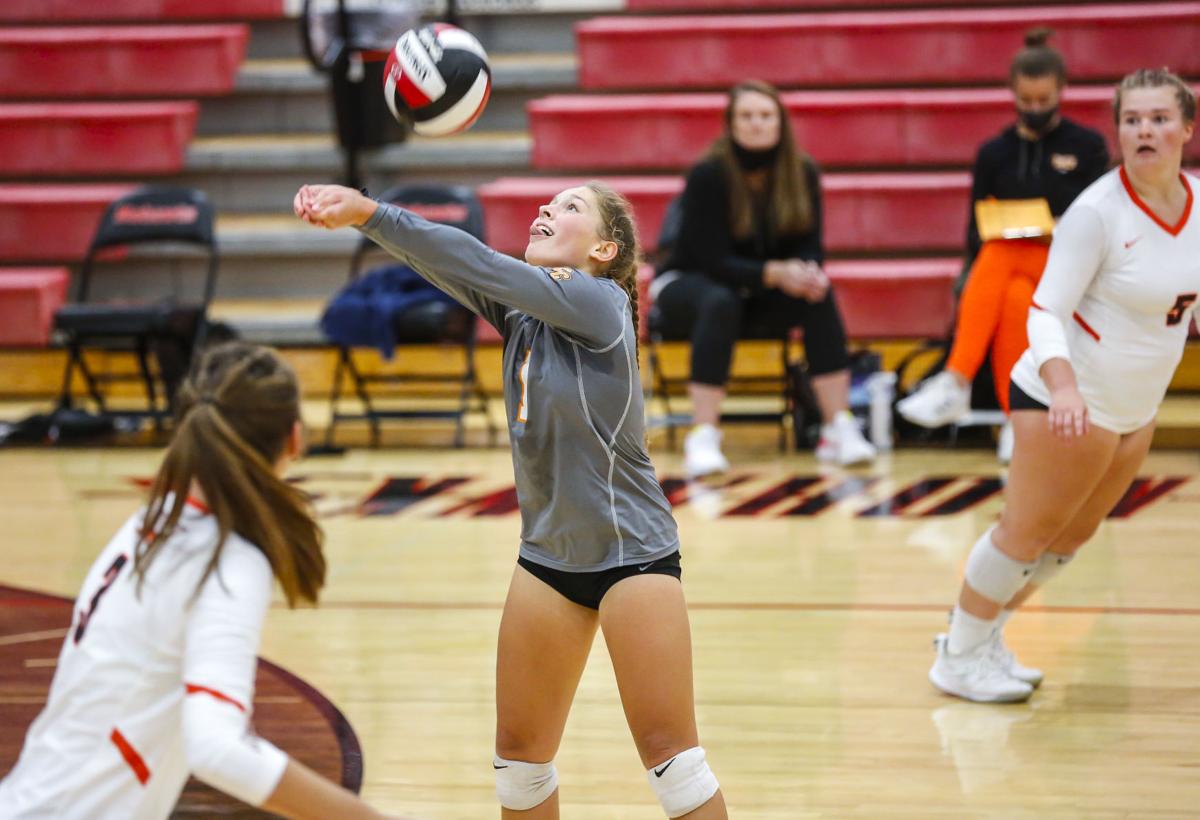 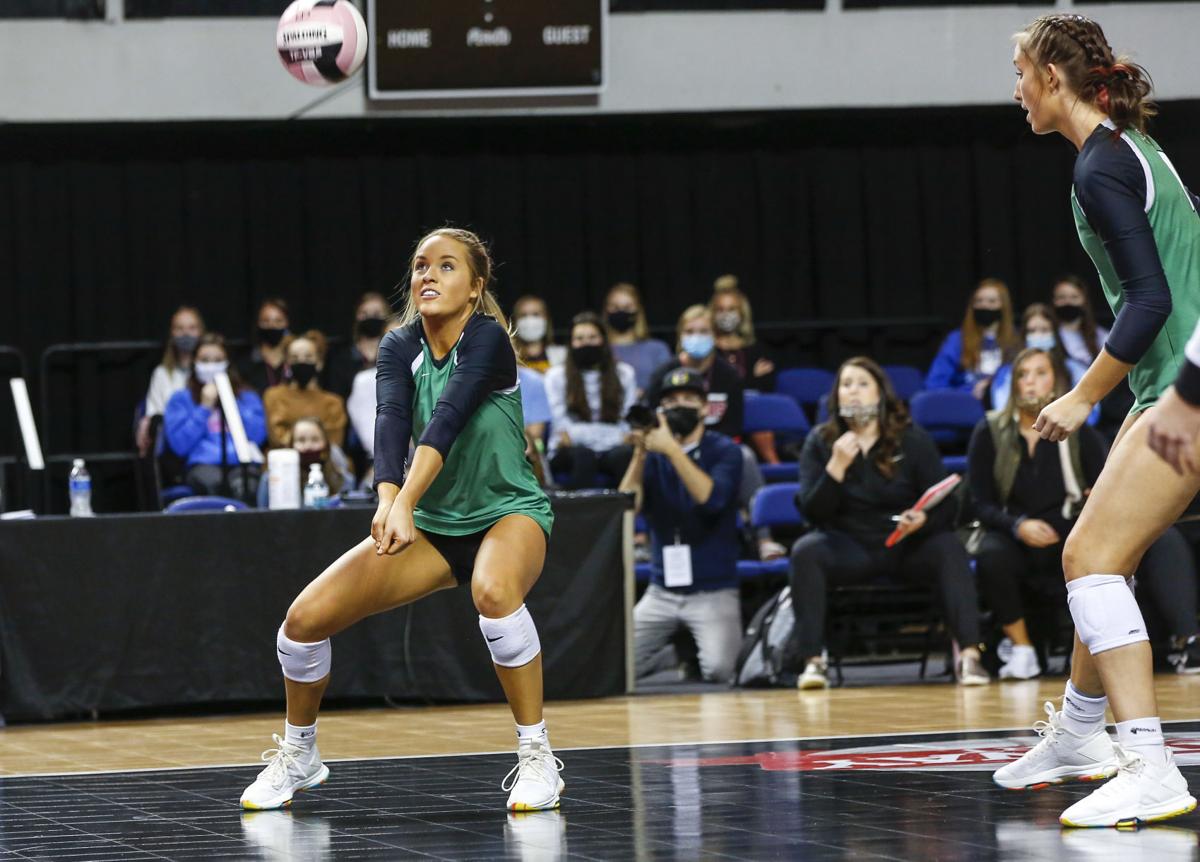 Osage vs. Mount Vernon Thursday during the Class 3A championship round of the state volleyball tournament at the Alliant Energy PowerHouse in Cedar Rapids.