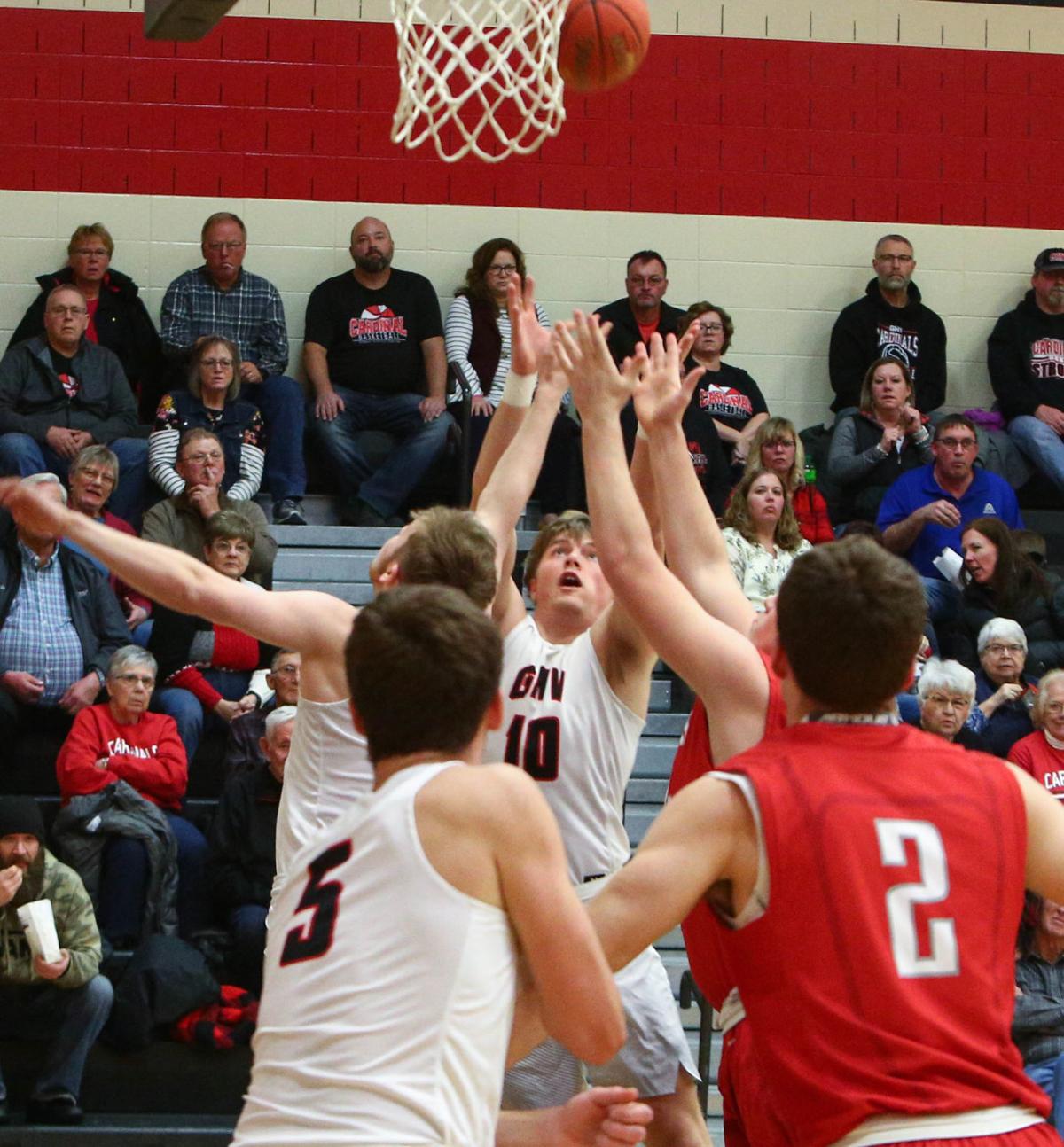 Landon Dalbeck (#10) shoots against West Hancock at a game in Garner on Tuesday, Jan. 21. 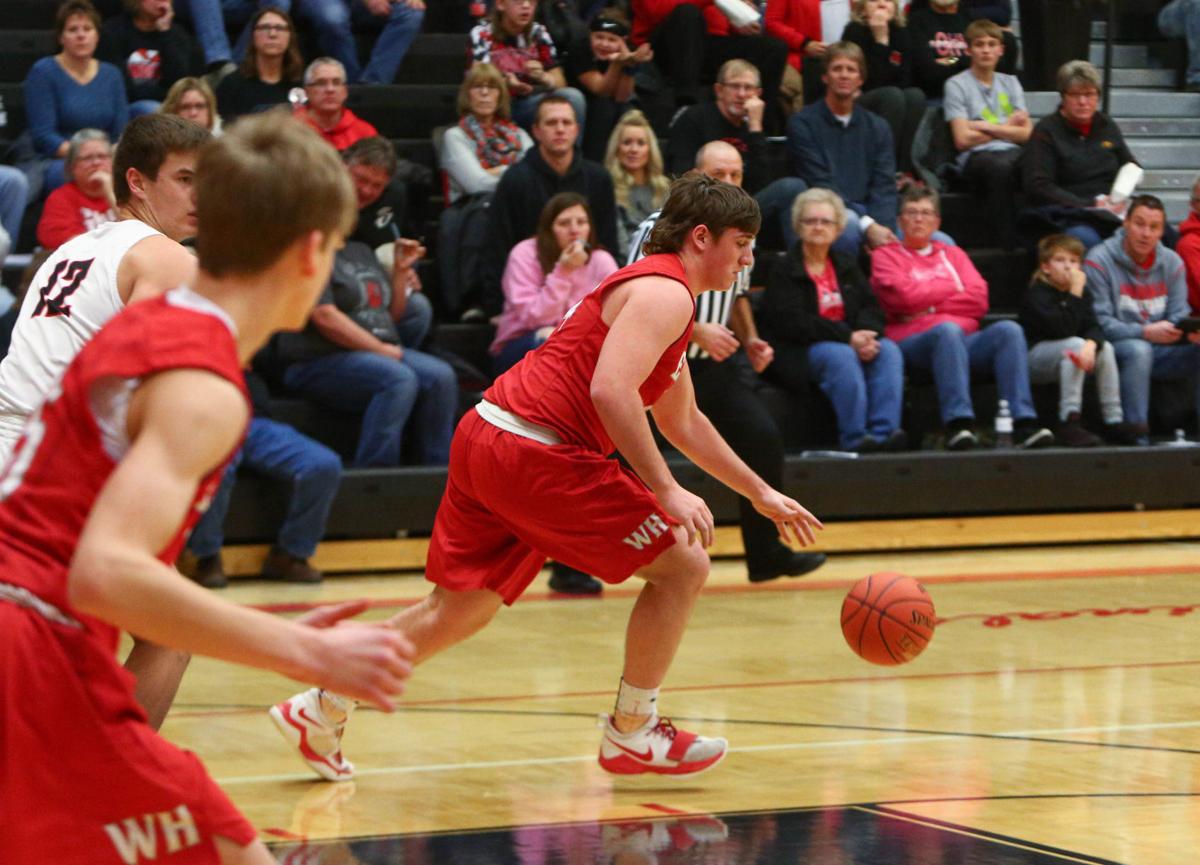 Tanner Thompson (#24) heads to the West Hancock basket after stealing the ball from GHV at a game in Garner on Tuesday, Jan. 21.

With just 4 seconds left in the game and his team behind by a point, Garner-Hayfield-Ventura coach Jake Young knew that if the Cardinals got the ball into the hands of Landon Dalbeck, they would have a chance to win.

That confidence paid off as the senior forward took three steps over the center court line and launched the ball as the buzzer was sounding to hit the game-winning shot in the Cardinals' 52-50 win over West Hancock on Tuesday night in Garner.

"Landon is one of this team's leaders and he's the guy we want to have the ball at the end of the game, no matter if he's shooting or finding somebody else," Young said. "I had a pretty good look at it and knew it had a chance."

Before his heroics, Dalbeck helped the Cardinals (6-7) get into a position to win the game by scoring five points in an 11-0 run after GHV had fallen behind 46-34 with 2:59 left in the game.

It was GHV's defense that set the tone for the dramatic win as the Cardinals forced a 10-second violation with 1:43 left to play to regain possession of the ball. A few seconds later, junior Brody Boehnke hit a 3-pointer to complete the 11-0 run and get the Cardinals to within 46-45.

Dalbeck hit two free throws with 1:08 left to give GHV a 47-46 lead, but that didn't last long as West Hancock senior Joe Smith put back a miss by junior Tanner Thompson for a one-point lead.

With 14.8 seconds left on the clock, Dalbeck went down the lane to hit a running jumper to give the Cardinals a 49-48 lead, then grabbed a rebound off a Thompson miss at the other end and was fouled. The senior missed both free throws to set up the thrilling ending to the Top of Iowa West conference rivalry game.

But it wasn't to be as the Cardinals fed the inbounds pass to Dalbeck, who dribbled past mid court and launched the game-winner.

"It comes down to playing team basketball and being disciplined," Young said about his teams resiliency after falling behind by double digits twice in the game. "We were able to come back by playing much better defensively.

"We could have fallen apart after falling behind by so much, but that's when we started playing as a team."

Dalbeck finished the game with a team-high 21 points and nine rebounds, while hitting 7 of 19 shots, including three from beyond the 3-point line.

None was bigger than his game-winner.

"I had an open look and remembered what my dad always says to stick the follow through," Dalbeck said. There is no quit in our team."

The Cardinals (6-7) are at Belmond-Klemme on Friday, while West Hancock (8-8) hosts North Union.

The week's most popular sports stories

As the 2020 calendar makes its final turn into December, wrestling season is finally here. Early in the season, there are many wrestlers to ke…

Breakout bets: Players who could see their star rise this winter

In every sports season, a player or two bursts onto the scene and establishes themselves as a star. Sometimes, it is a player that has been a …

For the Mason City girls' basketball team, the future has arrived.

Winter sports are upon us, and it is time to officially shut the door on the wild, crazy experience that was the 2020 Fall Sports season. We a…

This season, the Clear Lake boys’ basketball season will look to two main players to lead the Lions to the promised land.

From one week to the next in the most unique Big Ten football season ever, teams and players are learning to cope with the unexpected.

Landon Dalbeck (#10) shoots against West Hancock at a game in Garner on Tuesday, Jan. 21.

Tanner Thompson (#24) heads to the West Hancock basket after stealing the ball from GHV at a game in Garner on Tuesday, Jan. 21.