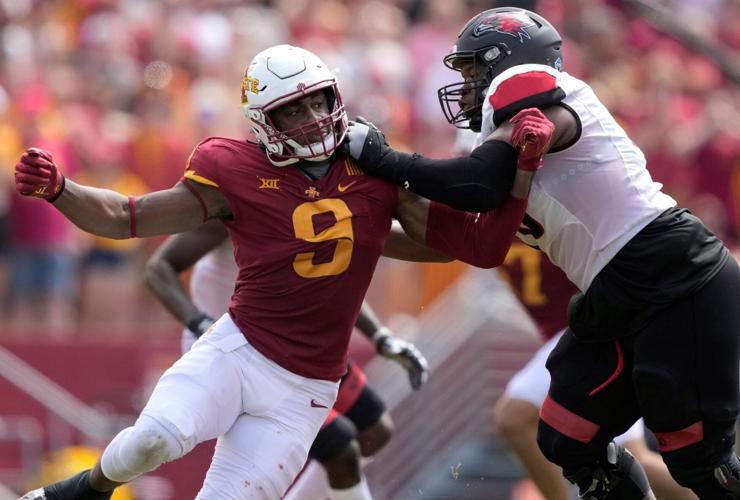 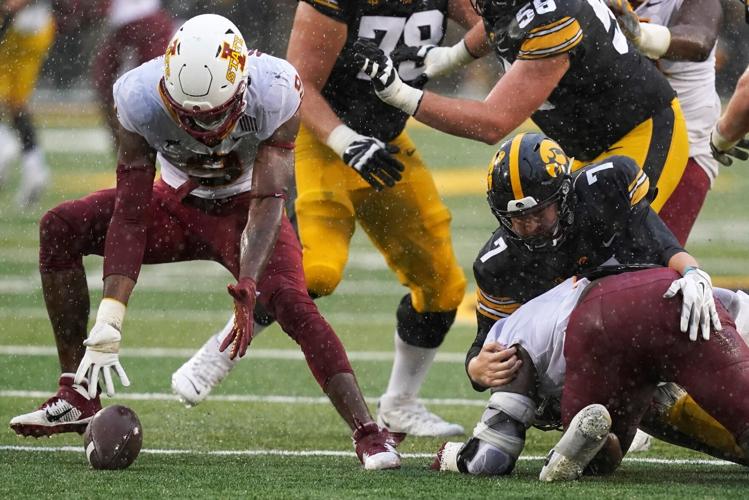 AMES — By the time Iowa State sacks king Will McDonald reached the interview room, he’d already forgotten the specifics of his first sack of the season.

McDonald’s second-half quarterback takedown during an excruciatingly long, but relatively stress-free 43-10 win Saturday over Ohio won’t pop off the screen during film study.

It was his 30th career sack, placing him just three behind future NFL Hall of Famer Von Miller on the Big 12’s all-time chart. So, no, the 6-foot-3, 236-pound All-American doesn’t focus on single sacks. His eyes are locked on the top prize.

“I am trying to beat the sack record,” said McDonald, who totaled 22 sacks the past two seasons.

Miller set the Big 12’s benchmark in that statistic 15 years ago. McDonald plans for his to hold up in perpetuity if he’s able to eke out at least four more sacks this season while providing the Cyclones (3-0) with even more versatility than he has in the past.

“I’m able to (be) comfortable in any position,” said McDonald, who hopes to help ISU improve to 4-0 for the first time in 22 years after Saturday’s 11 a.m. conference home opener against No. 17 Baylor. “Whatever position they put me in I feel like I’d be most comfortable in it because I do know most of the defense and what everybody’s doing.”

He’s played on the edge as usual. He’s played nose guard and at three-technique. He’s even played a bit of safety for a Cyclone defense that ranks eighth nationally in total defense (234.3 yards per game) — and McDonald is convinced he can do even more to help his team.

“If I did have the chance to do everything, like, even play quarterback, I definitely would,” McDonald said. “Just having that ability to do things, it’s just a blessing to have.”

“The sacks, those are just stats in my opinion,” ISU had coach Matt Campbell said. “I really feel if you look at his game last week (against Iowa), man, he’s all over the film. Played fantastic. Graded out (as excellent) the last two weeks, so great statistically that he gets that, but other than that, I really feel like he’s played great football for us.”

That’s not all the talented redshirt senior from Waukesha, Wis., has done. McDonald is on track to become the first in his family to earn a college degree. And sandwiched within sacks talk, he was asked what mattered more to him: breaking the Big 12 record or obtaining his diploma?

“I would probably say graduating,” McDonald said. “So that’s just one big thing I want to prove to everybody that I can do.”

McDonald finally decided to play football late high school after first shining on the basketball floor. He initially resisted, but eventually relented, and now he’s considered to be one of the top edge rushers in next year’s NFL Draft.

“The football coach would always come chasing after me, (and say), ‘Just come out. Come play football,’” McDonald recalled. “I would always say, ‘No, I don’t really want to.’ Then finally I went out my junior year and it’s just developed from there.”

So he’s happy to be chasing sacks records instead of trailing fast breaks for soaring dunks.

“If I had a chance to play basketball and football at the same time,” McDonald said, grinning, “I definitely would.”

IOWA CITY – Rutgers may have quarterback questions as it prepares to host Iowa, but the Hawkeyes have a quick answer when it comes to defendin…

AMES — Iowa State coughed up two turnovers. Baylor lost zero. The Cyclones were whistled for a spate of ill-timed penalties on the first and t…

There is never anything ugly about a Big Ten road victory.

UNI fixing things "between the ears" ahead of Western Illinois

CEDAR FALLS — The Northern Iowa Panthers sit at 0-3 for the first time since 1969, seven years before the first season in the UNI-Dome.

A capsule look at the Iowa-Rutgers matchup.

Iowa looks forward, not backwards, ahead of No. 4 Michigan

IOWA CITY – That was then. This is now.

AMES — Baylor quarterback Blake Shapen pranced out of the pocket, under duress and out of options.