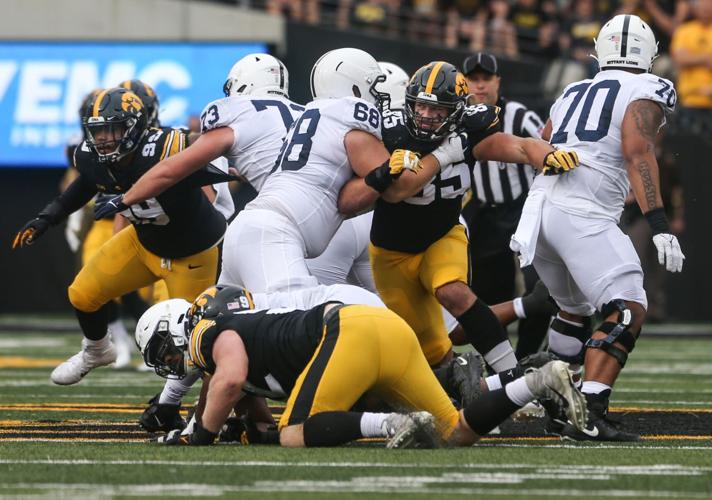 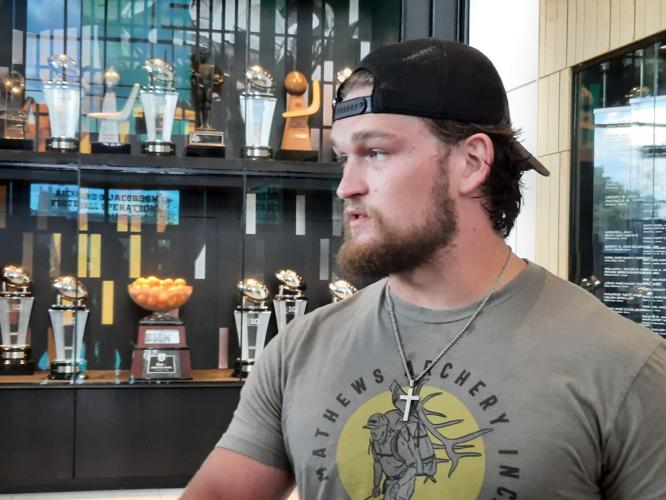 IOWA CITY — Logan Lee understands he will never reach the ultimate objective, but that won’t prevent him from chasing it.

The Iowa defensive tackle from Orion has continued his pursuit of perfection as the Hawkeyes work toward the start of fall camp later this week.

“I know the gifts and blessings I’ve been given and I’m doing my best each and every day to be able to live up to those,’’ Lee said. “I’ll never be able to be perfect, but taking another step closer to perfection is what I’m shooting for every day.’’

Lee has made strides in that direction throughout his Hawkeye career.

After starting two games in Iowa’s abbreviated 2020 season as a redshirt freshman, Lee moved into lineup at defensive tackle a year ago and the 6-foot-5, 275-pound junior continues to hold down that spot on the right side as the Hawkeyes open fall camp.

He started all 14 games and finished with 48 tackles last season, including three sacks and five tackles for a loss. He also broke up one pass and recovered a fumble.

That all illustrated how well Lee has adjusted to playing on the interior of the defensive front, a move from the end spot he lined up with after initially transitioning to defense after signing with Iowa as a tight end.

Lee has found a home at defensive tackle, able to effectively utilize his quickness in an area where reaction time is shorter but the requirements from a conceptual standpoint are narrower than they are on the perimeter.

“Everything inside comes at you quicker than at end. You’re at the point of attack,’’ Lee said. “You have to be fundamentally sound.’’

Lee has concentrated on improving his pass rush since the end of Iowa’s 10-4 season a year ago, working to solidify his hand-fighting ability and hand-eye coordination in that scenario.

In addition to preparing for his junior season, working to gain a little weight and continue to improve his conditioning, Lee hasn’t slowed down off the field.

He participated in the Big Ten equity coalition’s trip to civil rights sights in the Alabama cities of Montgomery and Selma in mid July, two weeks after marrying his long-time girlfriend Tori Verbeck of Geneseo on July 3.

The couple, who became engaged when Lee surprised Verbeck by popping the question during a Citrus Bowl outing at Universal Studios in Orlando, was able to get away to Hayward, Wis., for a week following their ceremony.

Lee said it “will be a little different, trying to balance everything’’ as a husband and a defensive lineman this fall.

His new wife will be busy as well, student teaching in Iowa City during the fall semester after competing in track and field at Wisconsin-Whitewater.

“We’ll both be busy, but it’s an exciting new chapter in our lives,’’ Lee said.

Since enjoying that Independence Day week break in Iowa’s summer workouts with a make-do honeymoon, Lee has been back at it preparing to be part of a defensive front that returns three starters and experience in back-up roles as well.

“It’s almost the opposite of where everything was at a year ago when we had to replace three starters,’’ Lee said. “Now, we have a lot of experience to build on and everybody is working hard, pushing each other to get better.’’

Noah Shannon started 14 games at tackle beside Lee a year ago and the Hawkeyes also return 14-game starter John Waggoner at an end position.

Joe Evans, who recorded 34 tackles in a back-up role at an end position last season, opens camp on top of the depth chart at the end position where Zach Van Valkenburg completed his eligibility last season.

Yahya Black and Lukas Van Ness at the tackle spots and Deontae Craig and a now-healthy Ethan Hurkett at the end positions bring experience in the back-up roles on the preseason depth chart.

Returning letterwinner Louie Stec and true freshman Aaron Graves could factor into the mix as well.

“There are a ton of guys who are capable of playing, probably close to a dozen guys there who could help us,’’ Lee said.

He expects that to help provide defensive line coach Kelvin Bell and assistant line coach Jay Niemann with options as they build what has grown into a healthy rotation of players in recent years, keeping fresh legs and bodies on the field.

“There are a lot of strengths that we have and we should be able to mix and match different packages,’’ Lee said.

He believes Iowa will be better positioned to present different looks at opponents up front than it was a year ago.

“I think it gives us all a great opportunity for each of us to grow and throw different looks at teams,’’ Lee said.

Lee looks forward to being in a position to contribute in his own way.

“The biggest thing I’ve always valued is being able to help the team as much as I can and working as hard as I can to put myself in that position,’’ Lee said.

“I’ve always been confident in my abilities and willing to bet on myself. I knew my time would come and it was able to come last year. I’m planning on completely exceeding that this year.’’

Five questions the Hawkeyes must answer

Iowa opened fall football camp Wednesday and as Kirk Ferentz begins his 24th season as the Hawkeyes’ coach, there is work to be done.

Five questions the Hawkeyes must answer

ISU returns its all-time sacks leader in Will McDonald, who could have chosen to go pro in 2021, but decided developing his skills one more season at the collegiate level made the most sense. He’ll also become the first member of his family to earn a college degree at the end of the semester.

First-year coach Myers Hendrickson put his Western Illinois football team through its first practice of fall camp Monday afternoon, but before moving forward the Leathernecks will gain an understanding of the past.

INDIANAPOLIS – On the field, nothing has topped his college experience for Kaevon Merriweather than being part of an Iowa football team which …

INDIANAPOLIS – Injuries have already taken a toll on the Iowa football team’s depth in two areas where the Hawkeyes were already thin.

INDIANAPOLIS – Jack Campbell enjoys his role, making plays from his linebacker spot in the heart of the Iowa football team’s defense.