Become a Member
Read Today's E-edition
Share This
Hawkeyes, Gophers keep their eyes on the prize
0 comments
Share this
1 of 2 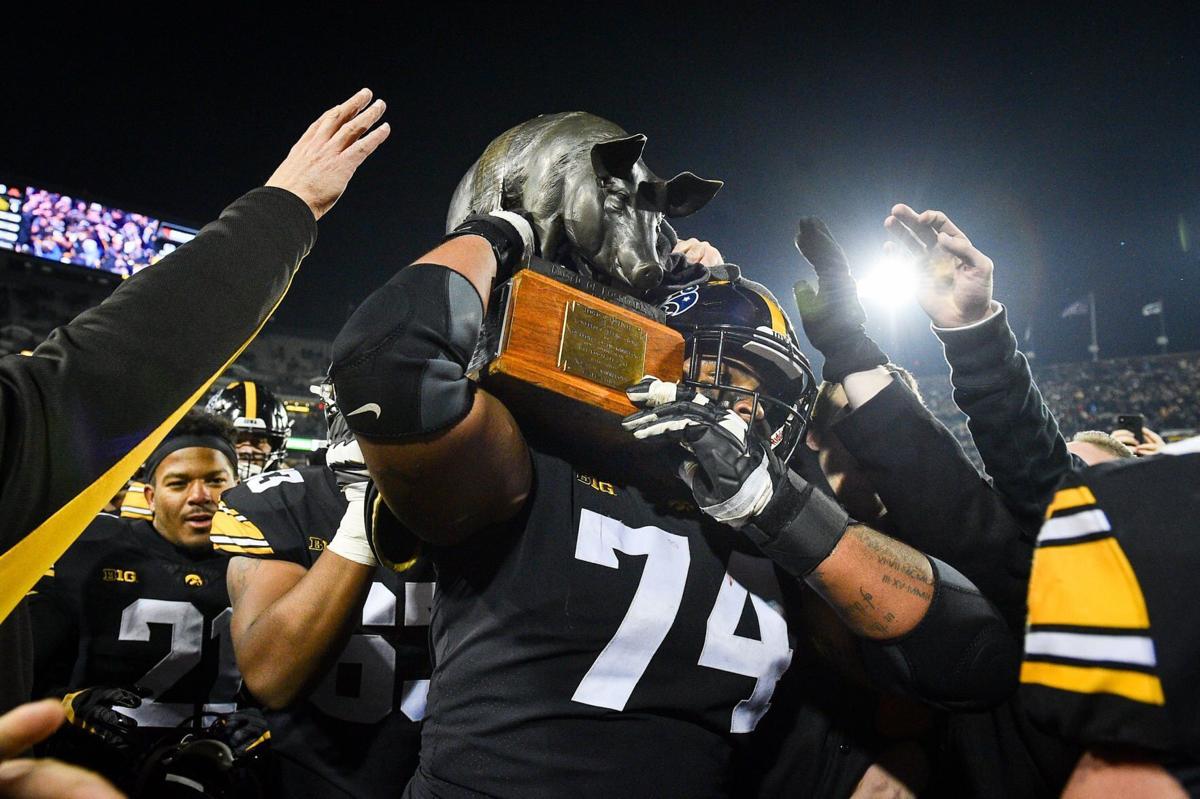 Iowa offensive tackle Tristan Wirfs hauls Floyd of Rosedale off the field at Kinnick Stadium following the Hawkeyes' 23-19 win over Minnesota in 2019. The Hawkeyes and Golden Gophers have played for the trophy 86 times, with the series even at 42-42-2 in those games. 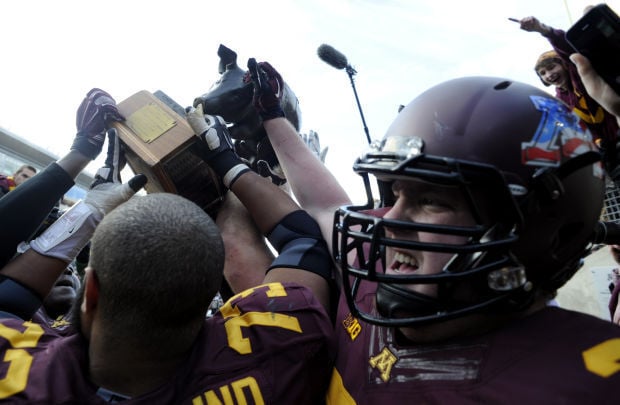 IOWA CITY – Despite an inability to solve its persistent Purdue problem and its struggles against Wisconsin, crafting a November to remember remains a possibility for the Iowa football team.

The only thing standing in the way is 98.3-pound bronze pig and an opponent that hasn’t had its hands on Floyd of Rosedale since 2014.

For the Hawkeyes, only one thing matters.

While Iowa may be in a four-way tie for first place in the Big Ten West, Saturday’s 2:30 p.m. game against Minnesota at Kinnick Stadium is the only thing on the Hawkeyes’ minds at the moment.

“One week, one game at a time. For us, that never changes,’’ Iowa safety Jack Koerner said. “We’re not in a position where we can get ahead of ourselves. This week, it’s all about Minnesota.’’

The Hawkeyes and Golden Gophers are among four teams currently sharing the top spot in the Big Ten West with 4-2 conference marks.

Iowa has already lost to the other two co-leaders, Purdue and Wisconsin, adding to the significance of the 87th time the Hawkeyes and Golden Gophers will play for Floyd of Rosedale.

While the Hawkeyes have won six straight games and 16 of the last 20 against their neighbors from the north, the record indicates just how significant battling for the bacon is for both programs.

In the 86 games Iowa and Minnesota have played with Floyd of Rosedale at stake, the series is tied 42-42 and there have been two ties.

“For us, it’s pretty easy,’’ Ferentz said. “Our focus has to be on what’s in front of us. Three tough, competitive games are in front of us and that leads to this week certainly with Minnesota coming to town.’’

A loss in any will all but extinguish the 19th-ranked Hawkeyes’ hopes of playing its way to the Big Ten title game.

“We always talk to our guys about November football, just how important it is and how that is when teams get defined,’’ Ferentz said. “These are the games that get remembered typically.’’

“There’s four teams at the top of the West right now that can all win it,’’ Fleck said. “And right now, they all kind of control their own destiny, but rivalry games are really important.’’

Fleck calls them “fun and exciting for college football,’’ calling this week “a one-game championship season with a rivalry trophy on the line.’’

Minnesota hasn’t had a lot of fun against Iowa in recent seasons.

The Golden Gophers haven’t even had a lead against the Hawkeyes since the fourth quarter of Iowa’s 14-7 win in the Twin Cities in 2016, a span of 245 minutes and 28 seconds.

Minnesota hasn’t beaten Iowa since winning a 51-14 game in Minneapolis seven years ago.

And the Golden Gophers haven’t beaten the Hawkeyes at Kinnick Stadium since 1999, Ferentz’s first season as Iowa’s head coach.

Fleck and Ferentz both point out that none of that will make a difference Saturday when the Hawkeyes take the field in all-black uniforms for the first time since a 2019 win over Minnesota.

“These are the fun games,’’ Fleck said. “Every game is fun, but it’s really fun to coach in games like that and I know it means a lot to our players, just as much as it’s gonna mean to Iowa. That’s what it comes down to, a one-game championship season and this is the next step for us.’’

It’s also the next step for the Hawkeyes, who are expected to line Alex Padilla up under center for his first career start at quarterback.

The sophomore completed 18-of-28 passes in last week’s 17-12 win at Northwestern after starter Spencer Petras was unable to effectively throw because of a shoulder injury suffered a week earlier at Wisconsin.

Padilla will be challenged by a defense that returned nine starters from a year ago and currently ranks third in the Big Ten in defending the run, allowing an average of 103.1 yards per game on the ground.

“It’s going to be a real challenge for us,’’ Ferentz said.

In November, Hawkeye players wouldn’t want it any other way.

“You want to be part of games like this. It’s a huge tradition game,’’ Iowa defensive end John Waggoner said. “The pig, it has a lot of significance. We’ll definitely emphasize that and the importance of keeping the pig.’’

Oklahoma picks up pieces after Lincoln Riley leaves for USC

Just a few months ago, Oklahoma was the talk of the college football world.

LINCOLN, Neb. (AP) — Spencer Petras ran for a 2-yard touchdown with 2:58 left to give 17th-ranked Iowa its first lead, and the Hawkeyes came b…

Hall is catalyst for Iowa State's 48-14 romp over TCU

LSU is hiring Brian Kelly away from Notre Dame, a stunning move by one of the most accomplished coaches in college football jumping from the sport's most storied program to a Southeastern Conference powerhouse.

The latest meeting on expanding the College Football Playoff wrapped up without a resolution Wednesday as the people involved agreed to keep talking.

Notre Dame is working on a deal to promote defensive coordinator Marcus Freeman to head coach to replace Brian Kelly, a person with knowledge of the situation told The Associated Press on Wednesday night.

LOS ANGELES (AP) — Standing on the top rim of the venerable Coliseum on a 76-degree autumn Monday, Lincoln Riley took a glance behind him at the Los Angeles panorama stretching from the Pacific Ocean to the Hollywood sign to the gleaming downtown skyscrapers.

Texas Tech athletic director Kirby Hocutt was trying to balance the needs of the program with the needs of its current players. When considering an in-season coaching change, they are not always one and the same.

The Michigan football team will have a special patch on the players' jerseys to honor the four victims of the Oxford High School shooting Tuesday, as well as the survivors and community.

Iowa offensive tackle Tristan Wirfs hauls Floyd of Rosedale off the field at Kinnick Stadium following the Hawkeyes' 23-19 win over Minnesota in 2019. The Hawkeyes and Golden Gophers have played for the trophy 86 times, with the series even at 42-42-2 in those games.