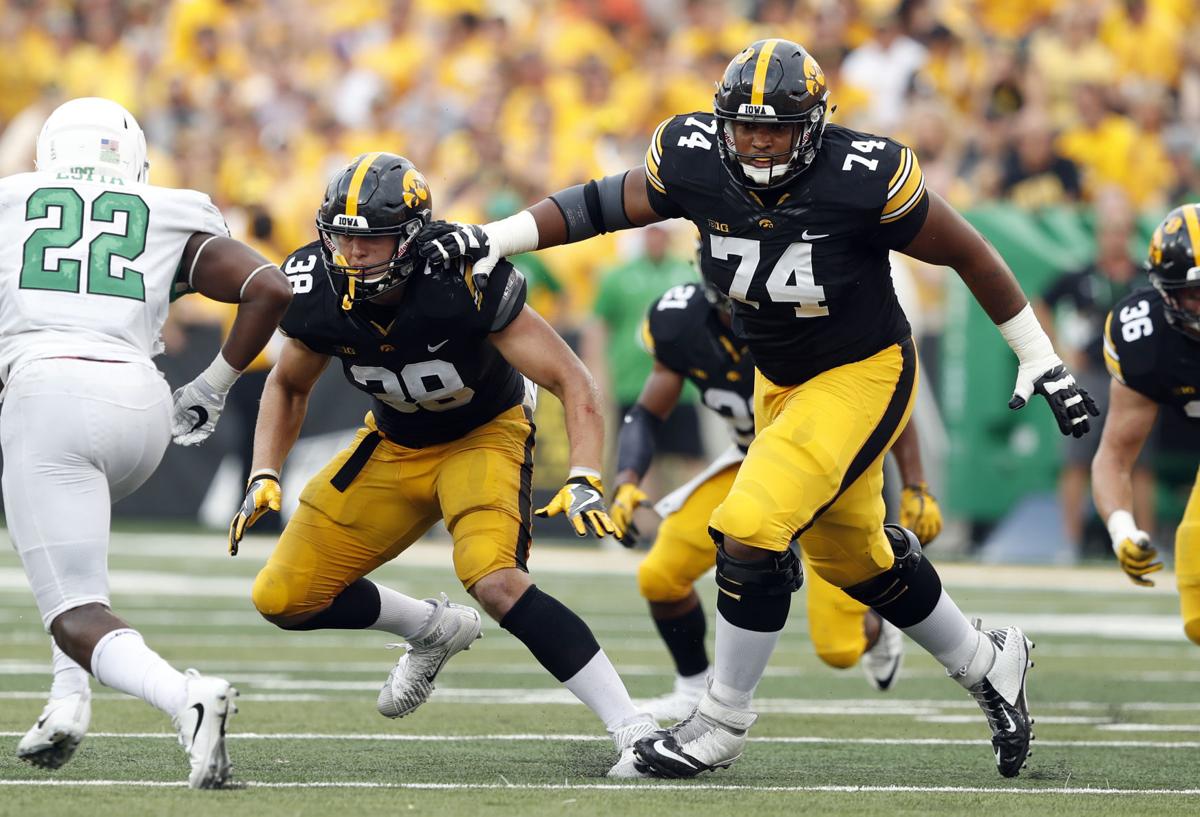 Offensive lineman Tristan Wirfs (74) and former tight end T.J. Hockenson (38) look to block North Texas linebacker E.J. Ejiya (22) during the second half of a game in 2017. 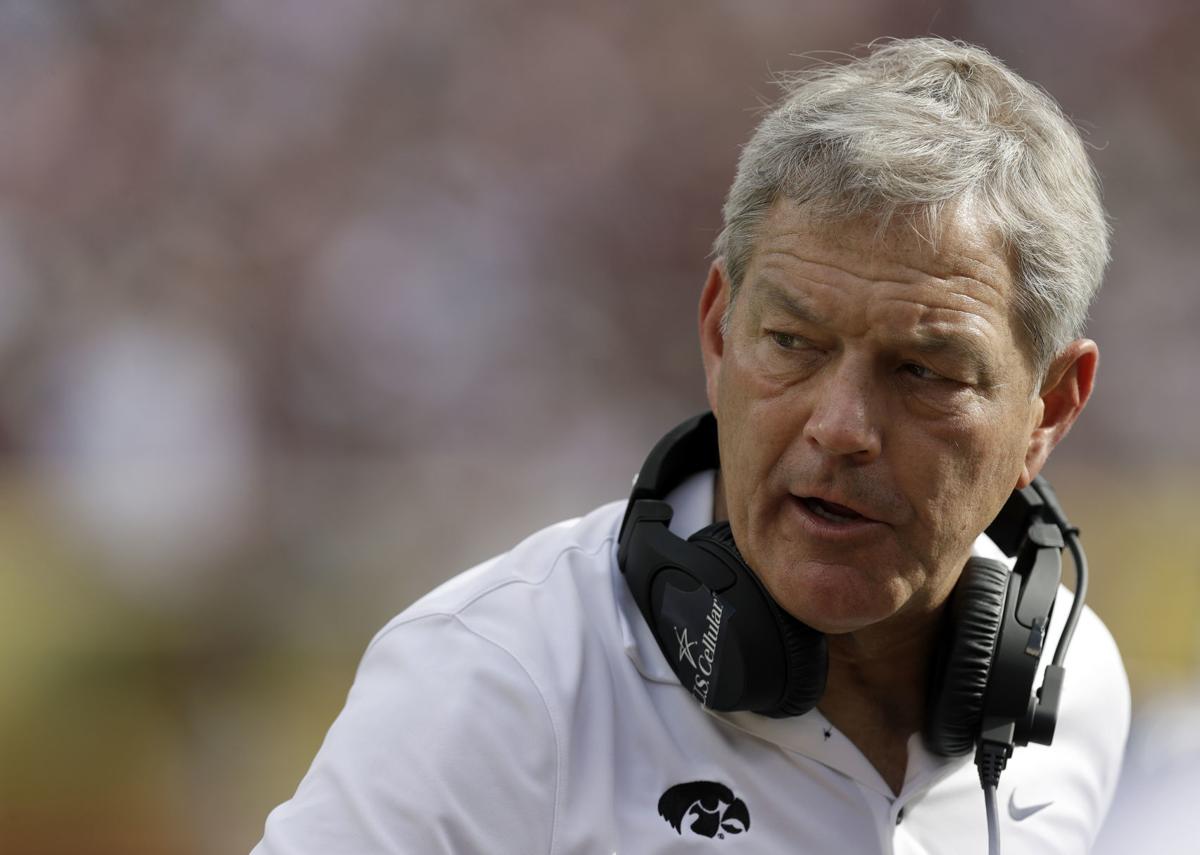 Iowa head coach Kirk Ferentz is asking what all college football coaches want to know: What type of physical condition will the Hawkeyes be in as they return to campus in upcoming weeks?

IOWA CITY – Tristan Wirfs has done a lot of things well during his first two seasons as a starter on the Iowa offensive line.

He also understands that the devil is in the details and as he prepares for his junior season, those details start with the hands for the returning honorable mention all-Big Ten tackle.

“It’s something I hear in my sleep, ‘Hands up. Hands up,’ and the coaches are right, it’s something I have to do and do consistently if I want to become the player I know I can become,’’ Wirfs said.

Wirfs understands that is part of what it will take for him to take his game to the next level, something he expects to accomplish while continuing to focus on the fundamentals as Iowa works toward the start of fall camp in less than a month.

The 6-foot-5, 320-pound lineman from Mount Vernon, Iowa, became the first true freshman to start at offensive tackle for the Hawkeyes during coach Kirk Ferentz’s 20 seasons at Iowa when he moved into the lineup midway through his freshman year.

He’s grown on the job, but still sees room to improve despite being mentioned as a potential elite selection in the 2020 NFL draft if he chooses to forego his final year of eligibility.

“I have a lot to learn here and there are a lot of ways I can become a better and more consistent player,’’ Wirfs said. “I’m not getting ahead of myself.’’

He has seen his name on future NFL draft projections, but said that is not something he spends much time concerning himself with right now.

“I don’t try and really think much of it,’’ Wirfs said. “It’s cool to see and everything, but you guys probably heard the same thing from (A.J. Epenesa), you’ve just got to take it one day at a time.’’

These days, those days are spent concentrating on strength and conditioning work and fundamental skill work that will help lead to more consistent performances once the season begins for Iowa.

“This summer isn’t that much different than a year ago, just trying to make the most of every day and then trying to do the same the next day and the day after that,’’ Wirfs said. “This is an important time of year for all of us. What we get done will have a lot to do with how we play as a team in the fall.’’

Wirfs suggests that seeing his name on those NFL draft lists is as much as anything a reflection of the progress he’s made since arriving at Iowa.

“Don’t get me wrong, it’s exciting to see stuff like that because going back to freshman year, you’re still thinking that going to the NFL is like a dream and everything and then now, you start seeing your name on things,’’ Wirfs said. “It’s exciting, but I don’t really try to and dig much into it or anything like that.’’

For now, the emphasis remains on being better this fall than he was last season, making the same kind of strides he made between his freshman and sophomore seasons.

Wirfs knows where that all begins.

“Hands up. Hands up,’’ he said, demonstrating the positioning he is working to achieve, trying to develop placement that will at some point become second nature.

“I’ve got to get that down and for me to play the way I want to and the way the coaches want me to play, that’s something I’ve got to make happen if I want to take that next step."

Alex Marinelli expects to chase bigger goals later this month, but the Iowa wrestler can accomplish something of a Hawkeye rarity this weekend.

AMES — The Iowa State men’s basketball team has one regular season game left and the Cyclones are still winless in the conference.

What a difference a week made for the Northern Iowa football team.

Greg McDermott says he offered to step down after ‘plantation’ comments, but Creighton players wanted him to stay

Creighton basketball coach Greg McDermott said Wednesday that he offered to resign after asking his players to “stay on the plantation” in a postgame speech. McDermott apologized Tuesday night for comments he made after a Feb. 27 loss. “Specifically, I said: ‘Guys, we got to stick together. We need both feet in. I need everybody to stay on the plantation. I can’t have anybody leave the ...

Iowa State's Young gets one more 'first' on senior night

Creighton basketball coach Greg McDermott apologized Tuesday for asking his team to “stay on the plantation” after a loss Saturday.

Iowa wrestling halted due to COVID-19

Michigan leaps Baylor into second behind Gonzaga in Top 25

Offensive lineman Tristan Wirfs (74) and former tight end T.J. Hockenson (38) look to block North Texas linebacker E.J. Ejiya (22) during the second half of a game in 2017.

Iowa head coach Kirk Ferentz is asking what all college football coaches want to know: What type of physical condition will the Hawkeyes be in as they return to campus in upcoming weeks?