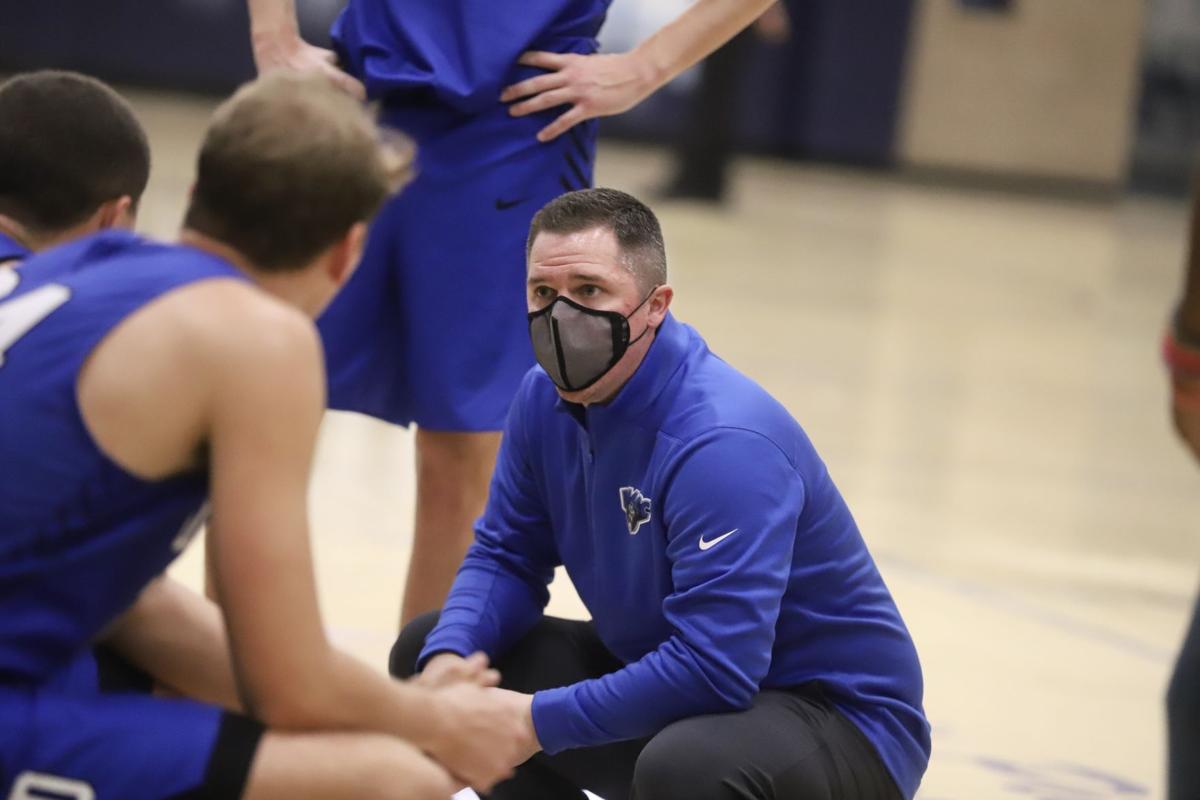 DMACC men's basketball coach and Forest City native Brett Putz (masked) talks with his players on the sideline in game during the 2020-21 season. Putz led the Bears to the NJCAA Division II National Title on April 24. 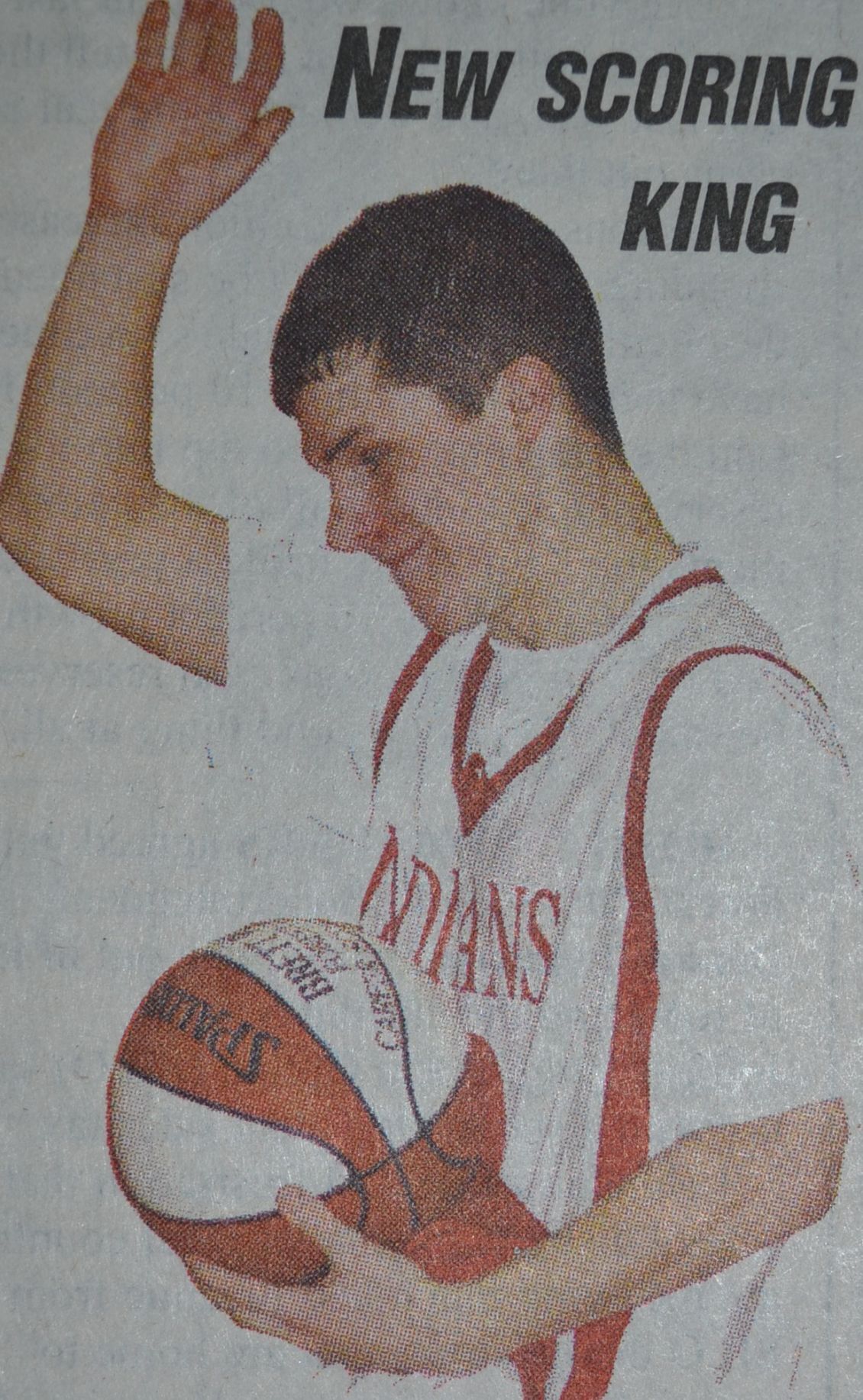 Admittedly, Brett Putz looked a little goofy on the sideline.

With an 11-point lead for his Des Moines Area Community College men's basketball team and 1.2 seconds left on the clock, Putz could reach out and touch victory.

Except the clock didn't start on the inbounds pass.

"I just wanted the clock to hit zero," Putz said. "You're not comfortable until it hits zero."

When the clock reached double zero and the buzzer sounded, Putz could finally breathe a sigh of relief.

The native of Forest City took a team into the NJCAA Division II National Tournament and won four straight games for his first title as a head coach in his first year leading the Bears.

It marked DMACC's first national championship in its history.

"I'm proud to say I coached all the way until the buzzer," Putz said.

Putz's journey to the top chair on the bench was one of jumping from state to state, but always staying in the Midwest.

His coaching career started in a very similar location.

At NCAA Division II St. Cloud State, Putz was a part of the 2010 Final Four team to go along with being the program's career leader in games played, as well second in 3-point field goals made and top-20 in steals and scoring.

A year after he received his bachelor's degree in recreation and sports management, Putz was put on the staff as an assistant.

"They allowed me to learn a lot of different stuff," Putz said. "There wasn't a side of a program where I didn't have a feel for."

From there, he was on the sideline at Wayne State College in Nebraska as an assistant from 2013-16 before becoming the Director of Basketball Operations for Omaha, a Division I program in the Summit League from 2016-18.

Putz was an assistant for one year at Highland Community College in Freeport, Illinois in 2018 then stayed in the state to take over as the assistant coach/recruiting coordinator for Chicago State.

Recruiting is one of the aspects of coaching at the junior college level that Putz is a big fan of.

"It wasn't a huge adjustment," he said. "I love the relationship side of things. I met people's families late in the year. It was just an odd thing, trying to build relationships and connections with people.

"At the end of the day, these parents and guardians are entrusting us with their kids."

All of that from a guy that came from a city of just under 4,000 residents (numbers from 2019) and made his mark on the Indians basketball program.

His father was the principal of the elementary school in town. So when Putz needed to shoot when he was little, a gym was right there.

He remains the school's all-time leader in scoring. For that, he credits the way his head coach - Dan Rosacker - used him.

"He lets his good players be good and that's not always the case with coaches at the end of the day," Putz said. "He does that at a really, really high level and my playing career was a perfect example of that.

"My junior year, I got to shoot a lot and I scored a lot. He gave me that confidence and that freedom."

That type of coaching rubbed off on him. When he started wearing the suit and tie, he wanted to have the same impact.

"If you have talented players, you have to let them be talented," he said. "You want to put your team and players in a position to be successful."

DMACC started off the season with a five-point win over preseason No. 1 Kirkwood. It was after that game, Putz started to think this group had something special.

And the wins didn't stop.

The Bears beat six of their seven opponents that were ranked inside the top-20. They took a 17-4 record into the Region XI Tournament as the three seed.

It was a short-lived initial postseason. Ellsworth made two game-winning free throws with .01 seconds left on the clock to stun DMACC 66-64 in the quarterfinals.

Putz refused to look at the setback in a negative light.

"We had already clinched a spot in the National Tournament so that loss helped us get rest and helped us get right," he said. "I'll sacrifice a loss for playing really well and winning a National Championship any day of the week."

So with that extra rest, the Bears steamrolled their opening opponent by 20-plus then won back-to-back two possession games before the championship victory over Davidson-Davie Community College.

After a week of letting it soak, Putz still can't believe it.

"I knew we had the pieces to do it," Putz said. "Our little mantra at the start of the year was unfinished business. They had a chip on their shoulder. It's still crazy to think about."

For the foreseeable future, Putz doesn't plan on going anywhere. He understands the difficulty it takes to get a head coaching job in college basketball, no matter what level.

He wants to see just how much more winning he can do in Central Iowa.

"Having head coaching experience is huge in this profession," Putz said. "I absolutely love it here. It wasn't about the level, it was about the opportunity. To have someone take a chance on you, it's an awesome experience."

When it rains, it pours.

Jonathan Morales was left alone on the right side of the pitch. It was happening nearly all Thursday night long.

St. Ansgar's Braden Powers went from a quarter-mile specialist to one of the top sprinters in Class 1A.

Lane and Reed Kruger didn't have much of a choice to play tennis growing up. As the brothers are in the midst of their first season playing together for Mason City, they are embracing the experience.

DMACC men's basketball coach and Forest City native Brett Putz (masked) talks with his players on the sideline in game during the 2020-21 season. Putz led the Bears to the NJCAA Division II National Title on April 24.