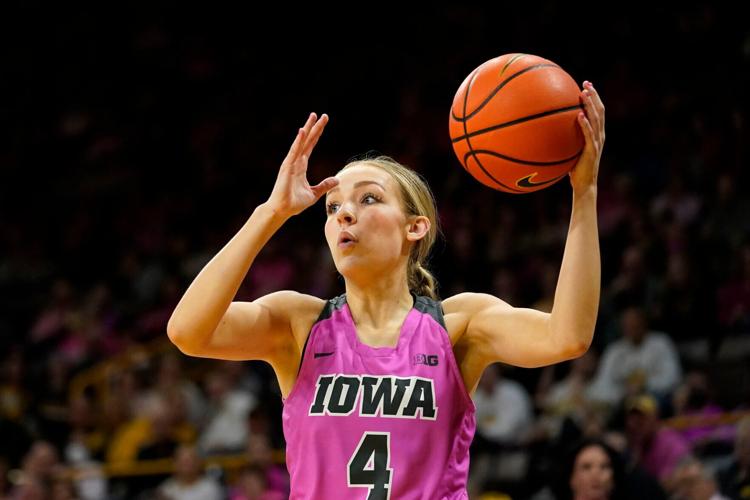 Iowa guard Kylie Feuerbach (4) grabs a rebound during the second half of a game against Maryland last season. Feuerbach will miss the upcoming season with a torn ACL.

The basketball season has ended before it started for Iowa's Kylie Feuerbach.

The junior guard suffered a torn anterior cruciate ligament in her right knee during a team workout earlier this week at Carver-Hawkeye Arena.

Coach Lisa Bluder announced Friday that Feuerbach will undergo surgery later this month to repair the injury, which will keep Feuerbach off the court for the entire 2022-23 season.

Feuerbach was a one of the Hawkeyes’ primary reserves in the backcourt last season after transferring to Iowa from Iowa State following her freshman season.

Her average of 14.6 minutes per game were the second most of any Hawkeye reserve last season and her 86.2% touch at the free throw line ranked third on the team behind Tomi Taiwo and Caitlin Clark at 88.5% and 88.1%, respectively.

A native of Sycamore, Ill., the 6-foot guard started in two of the Hawkeyes’ 32 games a year ago and averaged 3.4 points and 1.3 rebounds per game.

Her work included hitting all three shots she attempted from the field during a seven-point game and grabbing four rebounds in a win over sixth-ranked Michigan which gave Iowa a share of the Big Ten regular-season title.

Feuerbach is the third Hawkeye in the past two seasons to suffer a torn ACL.

The Hawkeyes anticipate the return sophomore forward Shateah Wetering and sophomore center Sharon Goodman from the same injury for the upcoming season.

Bluder said at a news conference a week ago she anticipates both players being cleared for full participation in practice by early October, well before Iowa’s Nov. 7 opener against Southern.

The season has ended before it started for Kylie Feuerbach of the Iowa women’s basketball team.

The Hawkeyes are working with an expanded roster – filling all 15 available scholarships for the first time in coach Lisa Bluder’s 23-year tenure – and that has added some youthful energy to a veteran team.

Ava Jones, a top-100 prospect who was struck by a car two days after committing to the Iowa women’s basketball program, is nearing a return to her home state of Kansas.

While Tom Izzo has been busy on the recruiting trail, he was also working on a new contract with Michigan State.

AMES — Jaren Holmes believed in himself. Coming out of high school, the 6-foot-4 guard simply wanted to show the college basketball world what…

Caitlin Clark has no problem with the challenge-filled nonconference schedule the Iowa women’s basketball team will play this season because it will be an advantage when it comes to postseason seeding.

Pryce Sandfort, the younger brother of current Iowa basketball player Payton Sandfort, announced Saturday that he will follow his brother in playing for the Hawkeyes.

This extreme athlete brings his wheelchair to the next level

This extreme athlete brings his wheelchair to the next level

Iowa guard Kylie Feuerbach (4) grabs a rebound during the second half of a game against Maryland last season. Feuerbach will miss the upcoming season with a torn ACL.