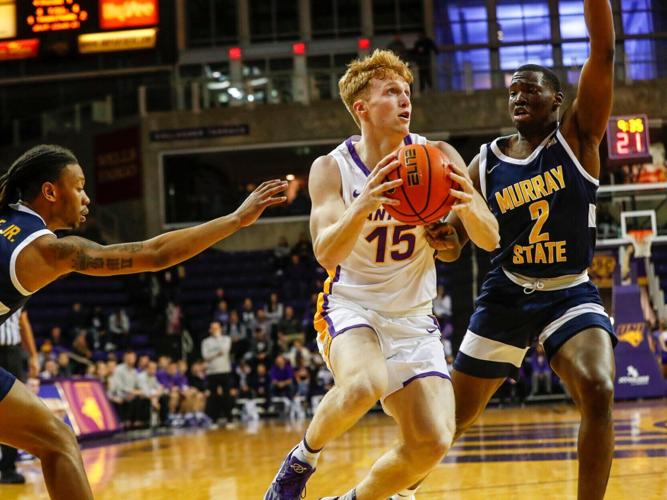 Northern Iowa's Michael Duax drives to the basket against Murray State in a game at the McLeod Center earlier this season. Duax scored a career-high 21 points in a win over Illinois-Chicago Saturday. 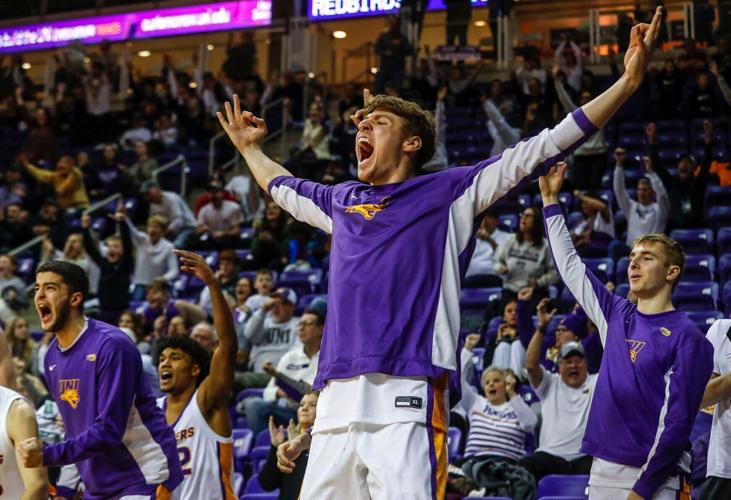 Northern Iowa's Chase Courbat and teammates celebrates after a three pointer against Illinois State on Wednesday at the McLeod Center in Cedar Falls.

Despite the opponents’ recent skid, UNI head coach Ben Jacobson said the Panthers knew looks were deceiving with the Flames.

“Road games are hard,” Jacobson said. “League games are hard, but maybe the ones that people would not think about as much. … UIC has played really well. … They have played good basketball, and they have had situations where they just need one more good play ... where they miss a shot and then they have a shot to win four or five of these.”

The Flames got off to a hot start against the Panthers and hit 5-of-8 three-point attempts in the first 10 minutes of action.

UIC’s sharp shooting put UNI in a hole early as the Panthers fell behind by as much as 23-7 with 11:34 remaining in the first half.

Over the next three minutes, the Flames hit two more three pointers to take a 29-14 lead.

However, around the eight minute mark of the half the Panthers settled in defensively and managed to begin carving away at the Flames’ advantage with some sharp shooting of their own.

UIC forward Filip Skobalj drilled the Flames first three-pointer in more than eight minutes at the buzzer to give the Flames a seven-point advantage at the half.

Redshirt freshman Michael Duax, who led the Panthers with seven points in the first half, said UNI gave the Flames too much room on the perimeter, which led to the three-point barrage.

“We made them feel really good in the first half,” Duax said. “So, then we made it harder on ourselves and needed to take that away in the second half.”

UIC started the second half with a brief 5-0 run before UNI commenced a massive comeback effort.

Sparked by a Tytan Anderson layup off an assist from Trey Campbell, the Panthers posted a 17-2 run lasting for 7:28 of the second half to take their first lead of the day, 48-45.

With 11:03, UIC guard Jalen Jackson ended the Panthers’ run on a driving layup off a Toby Okani assist.

Over the next five minutes of action, the Panthers and Flames traded baskets as UNI managed to nab a 61-58 lead with six minutes remaining in regulation.

Duax punctuated the run with a driving dunk that he said helped the Panthers lock in down the stretch.

“It was huge — defensively especially,” Duax said. “When a play like that happens, everyone gets fired up. We are like ‘Okay, we need to get a stop now.’ So, it gives us energy on the defensive side.”

Following the dunk, UNI held the Flames to 10 points in the final three minutes while scoring 11 points of its own.

Duax finished the night with a career-high 21 points and earned a double-double with 11 rebounds.

Bowen Born hit on 8-of-8 free throw attempts in the final minute of action to add 18 points, while Anderson added 17 points and eight rebounds.

Both Jacobson and Duax stressed the Panthers cannot afford to fall behind as they did against UIC and Belmont last two games.

“We are going to start playing some really good teams now,” Duax said. “When we start off down 10 or 15 that could be crucial to the game. Whether it is a mentality thing or a scheming thing, then we need to find ways to not start off the game down double digit points.”

Similarly, Jacobson said no part of the Panthers’ game is off the table in terms of what they will look at in trying to correct their recent early-game struggles.

“It will be too hard as we go through the rest of the schedule no matter who it is we are playing against,” Jacobson said. “We will take a good hard look at the scheme because it has happened twice now in three games … and then, in both of those games, we felt like we were back on our heels a little bit. … We have to get to the bottom of that.

IOWA CITY — Her team may have been up 18 points on Maryland following a sizzling first half Thursday, but Iowa guard Caitlin Clark wasn’t celebrating.

Northern Iowa's Michael Duax drives to the basket against Murray State in a game at the McLeod Center earlier this season. Duax scored a career-high 21 points in a win over Illinois-Chicago Saturday.

Northern Iowa's Chase Courbat and teammates celebrates after a three pointer against Illinois State on Wednesday at the McLeod Center in Cedar Falls.