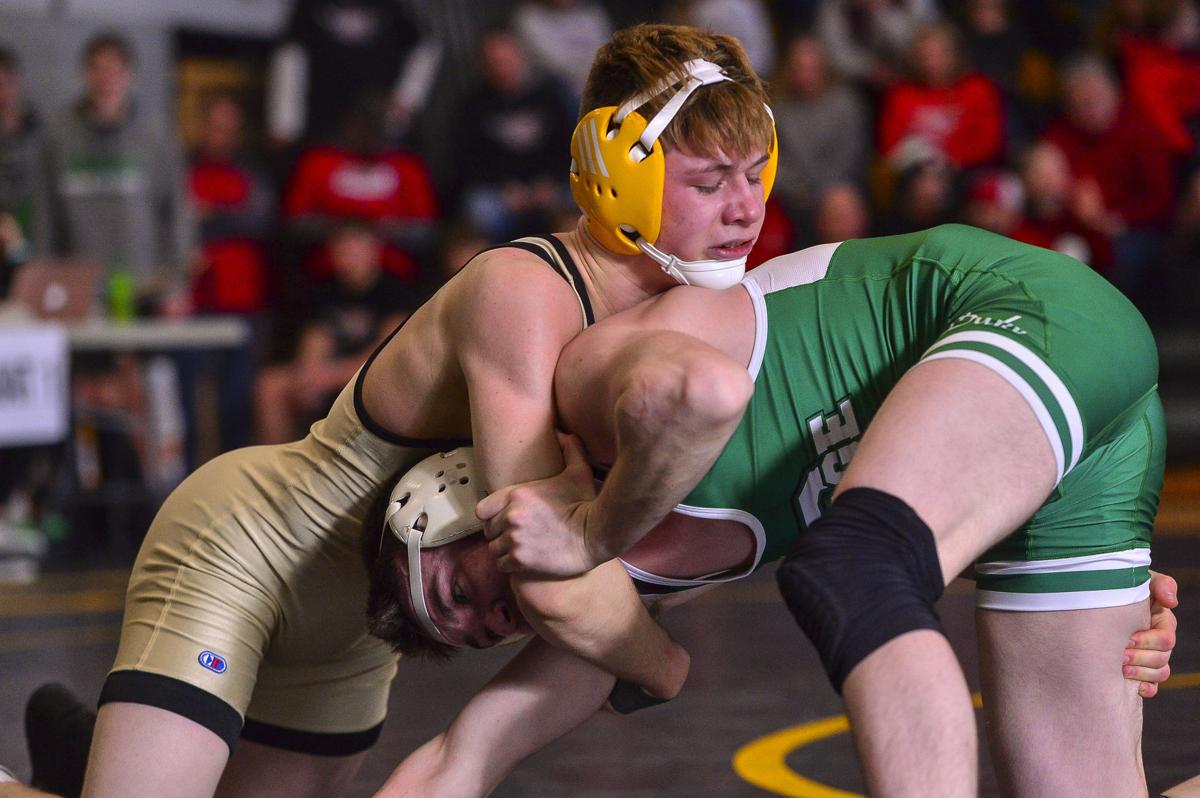 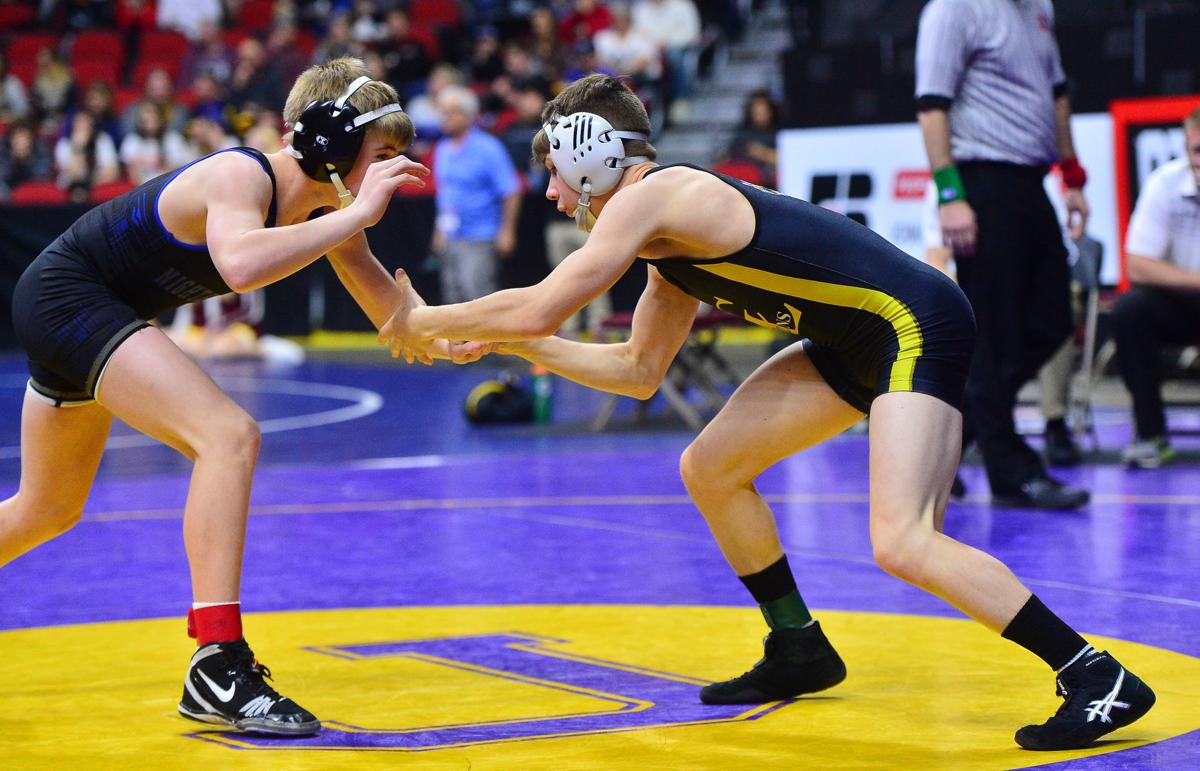 After tearing a ligament between his thumb and forefinger early in the season, Nelson has had to sit on the sidelines for much of the year, watching and waiting for his chance to return to the mat.

On Saturday, at the Class 2A, Section 1 tournament on his home mat, Nelson finally returned after several inactive months. He won his first match, a pin over Ethan Sesker of Forest City that took three minutes, and then lost to Osage junior Joe Sullivan by a 12-4 major decision.

The day still ended on a positive note for Nelson as his second place finish in the 126-pound weight class earned him a spot at the district tournament.

For Nelson, the best part of the day was just finally being back.

“The year started off well. I got hurt, and it’s been a long season to sit through,” he said.  “Most of it has been mental work the whole season as opposed to physical.”

Nelson qualified for the state tournament in each of his first two seasons with the Lions, and finished fourth in state last year at 113 pounds. With the postseason now here, it was time for Nelson to come back. Before Saturday, he’d wrestled only 12 matches this season.

"He just needs some mat time,” head coach Doug Munn said. “He’s only had 12 matches coming into today. He wrestled that kid from Osage, also a returning state place-winner. He just needs to get more mat time."

Nelson was the team’s only returning state place-winner this season. He admits that he was a little bit nervous about taking on that leadership mantle after the departure of program stalwart and state champion Eric Faught. But with four Lions wrestlers qualifying for districts, it doesn’t seem like Nelson will be lonely.

When you go down to state and wrestle in front of thousands on the floor of Wells Fargo Arena, it can be a bit overwhelming, according to many wrestlers who have made the trip. For that reason, having state tournament experience can be an invaluable asset for a young team like the Lions.

“It’s incredible,” Munn said. “You get a lot of kids that go down to that state tournament, and they get that wow factor. Sam, he’s pretty even-keeled. I expect him to win it next week, and do subsequently well down in Des Moines.”

For Nelson, there is at least one thing this season that has been nice. After competing last season at 113, Nelson decided to go a little bigger, making the jump to 126. Though he hasn’t gotten the chance to wrestle very much, he is already enjoying himself more.

“I get to eat more, so I have more energy going in,” Nelson said. “That is very nice.”

Nelson is excited about his opportunity to wrestle at the upcoming district tournament on Saturday, but a second-place finish at sectionals is not what he hoped for. After winning the  sectional championship the past two seasons, it was a disappointment. But Nelson kept it in perspective, and he knows that it still sets him up pretty well for a return to state.

“I wasn’t the most happy with it, but I guess it keeps me hungry,” Nelson said. “It's not too unfavorable. When you get to districts, the kid who won his bracket in the other sectional, he is likely to win. So it’s just more of a guarantee to get into state.”

Nelson isn’t the only person excited about his return. Munn, in his first year as head coach, but 10th as a member of the Clear Lake program, is always excited this time of year. Munn’s favorite tournament of the year is sectionals, because the most skilled wrestlers finally start to separate themselves from the rest of the pack.

Osage's Sullivan has now beaten a Clear Lake wrestler three times this season, following his win over Nelson. Both wrestler and coach are excited about the possibility of a rematch. Maybe the fourth time is the charm?

"In another week on the mat, we’ll get (Nelson) wrestling, and hopefully get another shot at Sullivan," Munn said.

The Lions will wrestle on Saturday at the Class 2A, District 1 tournament at Algona High School.

The Bicycle Friendly Community program has recognized more than 400 communities nationwide and works to improve conditions for bicycling in specific areas.

A requirement that bicyclists have front and back lights on their bikes and wear reflective clothing will move to the full House Transportation Committee although no groups are registered in favor of it.

A bill calling for college student-athletes to have control of their names, images and likenesses advanced to the Senate Education Committee over the concerns of regents universities and private colleges.

A proposal to expand the four-decade-old bottle bill and double the handling fee on redeemed bottles and cans got mixed reviews in a Senate Commerce subcommittee. SSB 3109 also could lead to the eventual repeal of the bill enacted in May 1979 if the three-year rolling redemption average fell below 65 percent.

Violating the provision would be a moving offense carrying a $100 fine, but there would be a “grace period” from July 1 to next Jan. 1 when only warnings would be issued for violations.

When it comes to protections for manufactured housing park tenants, Iowa lawmakers have picked up where they left off last year, and then some.

As it has all season long, the Osage wrestling team dominated the day, claiming five district titles, and qualifying six total wrestlers for n…