Get the latest baseball news delivered to you!

Sign up to receive professional baseball news in your inbox every week. 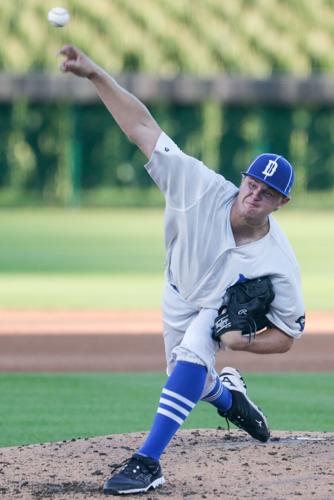 Quad Cities River Bandits pitcher Chandler Champlain throws during the fourth inning of Tuesday night's game at the Field of Dreams near Dyersville. Champlain worked into the seventh inning during Quad Cities' 7-2 win. 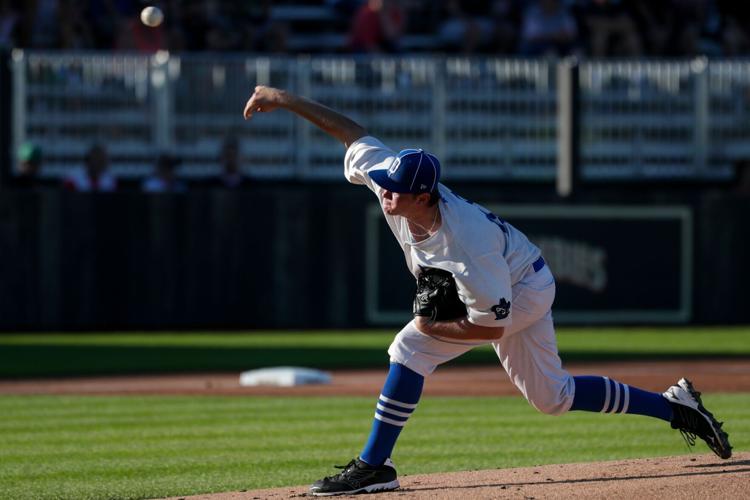 Quad Cities River Bandits pitcher Chandler Champlain delivers a pitch during the first inning of a 7-2 win over Cedar Rapids in the inaugural MiLB at Field of Dreams Game in Dyersville, Iowa, last Tuesday.

Life has been a bit of a blur lately, but Chandler Champlain knew one thing for certain when he took the mound Tuesday night for the Quad Cities River Bandits.

He had to deliver as Quad Cities took on Cedar Rapids in the inaugural MiLB at Field of Dreams Game.

It had nothing to do with the game being nationally televised or getting the chance to compete in such a unique setting at the iconic movie site near Dyersville, Iowa.

It had everything to do with getting a chance to show his new organization what he is all about.

Champlain’s first two outings for the River Bandits after being traded to the Royals from the New York Yankees organization as part of a deal which sent Andrew Benintendi to the Bronx did not go as planned.

Promoted from low-A Tampa with the Yankees to the first high-A assignment of his career with Quad Cities following the trade, Champlain struck out one batter and walked one in an inning of relief in a July 31 game at Beloit in his Midwest League debut.

Three days later, he gave up five runs on eight hits over 2.2 innings and took the loss in a start against Wisconsin.

Tuesday against a Cedar Rapids team Champlain is scheduled to face again Sunday in the final game of a six-game series, everything came together.

The ninth-round selection in the 2021 draft out of USC scattered six hits over a career-best 6.1 innings, striking out seven batters in a walk-free start that sent the River Bandits on their way to 7-2 win on the biggest stage of the season.

The 23-year-old native of Coto de Caza, Calif., called it the “best day” of his baseball life when it was over.

He retired 12 of 13 batters during one stretch between the first and fifth innings and threw strikes on 56 of the 82 pitches he needed to craft the longest outing of his professional career.

“It’s not always about me. I just want to go out and compete and help my team,’’ Champlain said. “There are some personal goals that I have. After getting knocked around a bit, this was a day I needed to prove what I can do, to be the best that I can be. I wanted to go out and attack the zone, trust my defense and get the ‘W’ and we were able to do that.’’

Champlain owned the upper half of the strike zone with his fastball in the start and complemented that with effective off-speed pitches in the lower half of the zone.

He praised the work of catcher Kale Emshoff and his work behind the plate, saying it all contributed to the success he enjoyed.

“I couldn’t have asked for a better performance from my team,’’ Champlain said. “This atmosphere — which I’ve never experienced before pitching in front of a crowd like this — and the pressures and stress of a new team environment, new coaches, new routine, new organization, this was just perfect.’’

River Bandits manager Brooks Conrad is excited with what he has seen from the two pitchers Quad Cities received following the trade between Kansas City and New York, Beck Way and Champlain.

He learned a lot Tuesday, watching how Champlain competed.

“When he was coming in off the field each inning, you kind of wanted to move out of his way a little bit,’’ Conrad said. “He was going to run over anything in his path.’’

Champlain said he is feeling comfortable as he settles into his new surroundings.

No player in his first full season at the professional level thinks about getting traded, but that lesson about the business of baseball became reality days before Champlain stepped on a diamond surrounded by corn in the middle of Iowa.

He was greeted Tuesday on the movie site field by his parents, who had flown in from California to watch the game and see their son for the first time since he had been traded to the Royals.

That includes calling the Quad Cities his baseball home and getting the chance to explore a bit of the Midwest with the River Bandits on Tuesday’s day trip to the Field of Dreams.

“Iowa is beautiful and peaceful. People are so caring and nice. Life is just so much less stressful,’’ Champlain said. “Coming from Los Angeles and USC, the pace is so different. It’s been a good move for me and this is a place where I can get some work done.’’

Get the latest baseball news delivered to you!

Sign up to receive professional baseball news in your inbox every week.

Quad Cities River Bandits pitcher Chandler Champlain throws during the fourth inning of Tuesday night's game at the Field of Dreams near Dyersville. Champlain worked into the seventh inning during Quad Cities' 7-2 win.

Quad Cities River Bandits pitcher Chandler Champlain delivers a pitch during the first inning of a 7-2 win over Cedar Rapids in the inaugural MiLB at Field of Dreams Game in Dyersville, Iowa, last Tuesday. 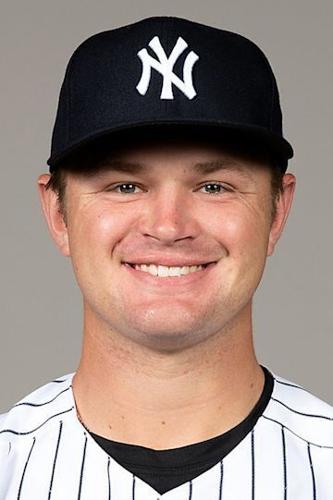