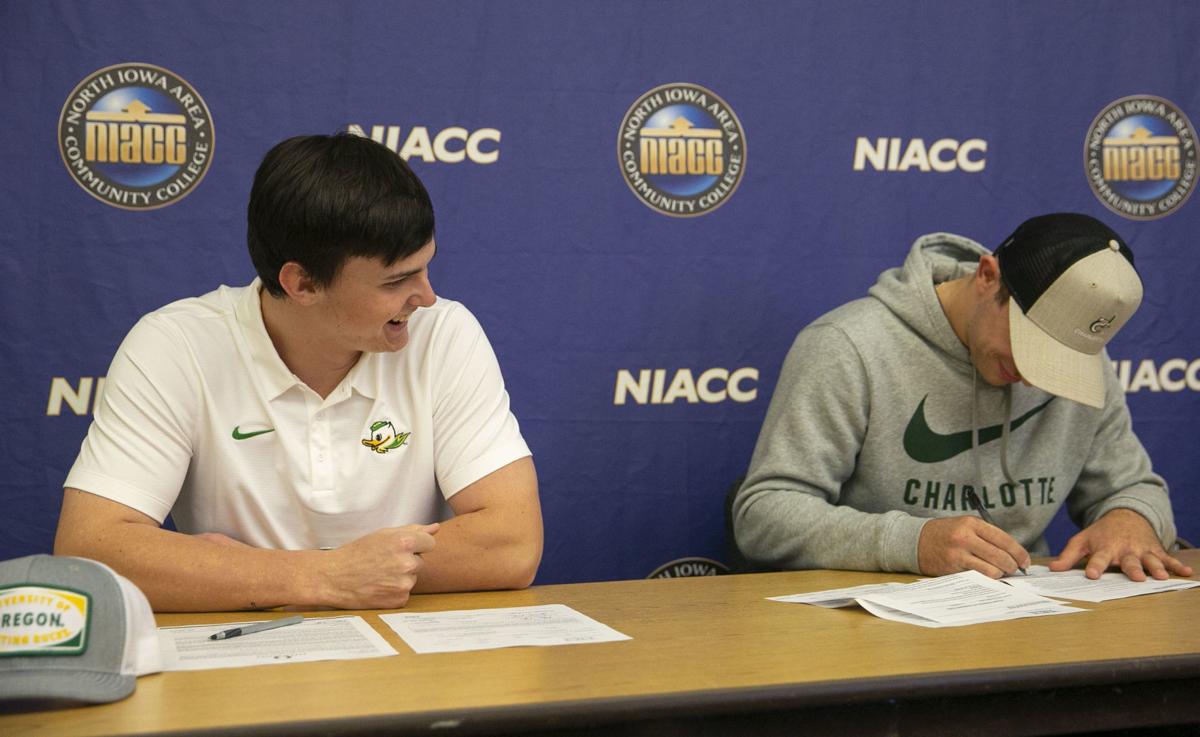 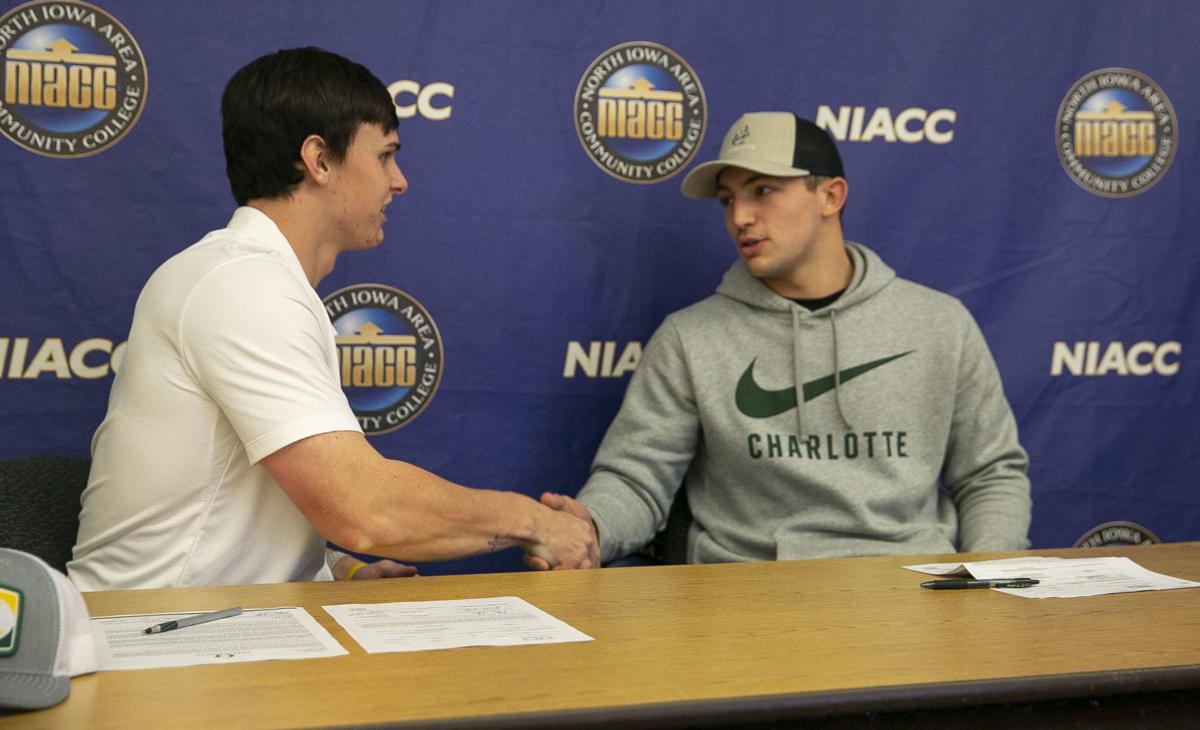 North Iowa Area Community College sophomore pitchers Patrick Pridgen, left, and Tyson Tucker shake hands after they sign their national letters of intent to pitch at University of Oregon and University of North Carolina at Charlotte, respectively, on Thursday in Mason City.

As teammates and coaches gathered at the Recreation Center to show support, right-handed sophomore pitchers Patrick Pridgen and Tyson Tucker both signed on the dotted line to extend their college careers with the dream of going even further.

Patrick Pridgen signed with the University of Oregon Ducks, one of the final two prospective programs he was interested in joining. A visit to the campus in Eugene sealed the deal, Pridgen said.

"I heard from a decent amount of schools this fall, but going into the final stretch I pretty much narrowed it down to Oregon and Houston," he said.

Between meeting the coaches and players and experiencing the culture, Pridgen said there was an opportunity there that he couldn't pass up.

"It was somewhere that I knew I wanted to be," he said.

In his freshman year at NIACC, Pridgen posted a 7-2 record in 12 appearances, throwing two complete games. He also averaged nearly nine strikeouts per nine innings pitched with an ERA of 3.47/ He had 61 strikeouts and 35 walks.

When speaking of his time at NIACC under head coach Travis Hergert, Pridgen had nothing but praise.

"The opportunity coach Hergert has given me has been everything," he said. "If I hadn't come here out of high school, I have no clue where'd Id be."

"It's a fantastic fit," Hergert said in a press release of Pridgen heading to Oregon. "It's our first guy we've sent to the Pac-12 so now we've sent someone to all of the power five conferences."

Tyson Tucker has signed with the University of North Carolina at Charlotte. He also said a campus visit helped him make his decision.

"I talked to a couple of Division 1 schools and at the end of the day when I took my visit to Charlotte and the chance to work with that staff and everything they've got going on there, it was and easy sell for me," he said.

In a NIACC release, Hergert said Tucker's signing was a special one for him.

"Tyson has faced a lot of adversity here at NIACC," he said.

Tucker was 2-0 in 12 appearances with 24 strikeouts and 34 walks in over 21 innings pitched his freshman year.

"He may not have numbers coming off his freshman season, but he took our advice and went to Pitching Premier Performance in St. Louis, who do a great job of training pitchers and he came back a different pitcher – not only physically but mentally. He really did a solid job this fall and was lights out," the NIACC coach said.

"The opportunity I was given from coach Hergert when I wasn't given a lot of opportunity in high school is something I'm super grateful for," Tucker said. "They taught me more than just baseball, just everything in life like how to be a better person, so I can't thank them enough."

Algona battles OABCIG in 2A semis

On Saturday, the undefeated Bulldogs will battle OABCIG at the UNI-Dome in the 2A state semifinals

The Mason City boys swimming team has a lot of positives in the early part of the season, but one of the shortcomings for the Mohawks is some …

North Iowa Area Community College sophomore pitchers Patrick Pridgen, left, and Tyson Tucker shake hands after they sign their national letters of intent to pitch at University of Oregon and University of North Carolina at Charlotte, respectively, on Thursday in Mason City.