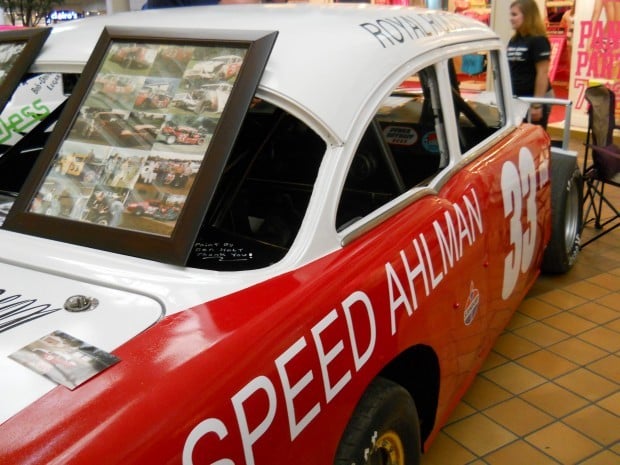 This is a replica car of the one Don "Bub" Anderson drove in the early 1970s. 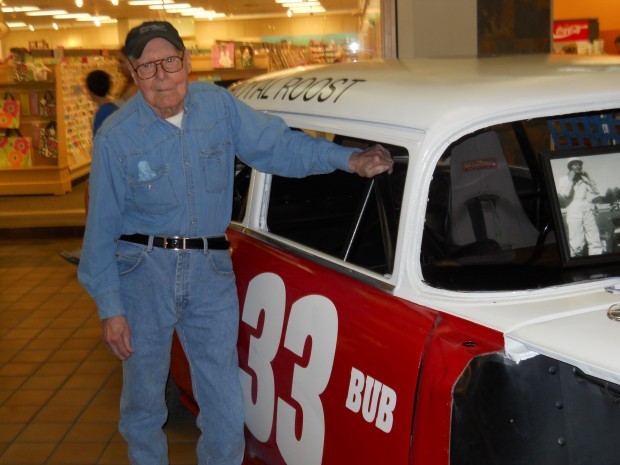 Don "Bub" Anderson stands next to a replica car of his on Saturday at the Southbridge Mall.

MASON CITY — Don “Bub” Anderson still recalls the last night he climbed — or had to be helped — out of a race car.

At 85 years old, Anderson stood and looked at a replica of his old No. 33 race car Saturday at Southbridge Mall.

The car was created to commemorate Anderson’s racing legacy.

It’s been four decades since Anderson flipped his car — about as high as a telephone pole as some remember — and broke his back.

“You know, I’d try it again,” Anderson said. “I loved all of it. The garage. The guys. You’ve got to have a whole lot of guys together if you are going to have fun. That’s what we did. If we made 20 bucks we thought it was great.”

Some of his nephews drew up the idea this winter.

Jim Anderson, a relative of Bub’s, is president of the North Iowa Vintage Car Club.

The club has 13 members and a number of their cars were on display Saturday at the car show at the mall.

None meant more to many of the people inside Southbridge Mall than Bub’s ride.

“He was a pioneer of this sport,” Jim Anderson said.

Needing a walker to get around, Anderson jokes about getting behind the wheel.

His son, Denny, is one of the area’s most well-known Modified drivers.

His grandsons, Jamie and Scotty Anderson, have raced in the area for years. They’ll be around the track this year when I-35 Speedway kicks off its season April 8.

“He inspired a lot of people to go racing,” Jamie Anderson said.

Bub never did it for the money.

He wasn’t in it to get rich. He was in because he had a love for cars and everything that came with driving a race car.

His career ended that day when his car flipped multiple times. The injury hurt for a while. The memories haven’t faded after four decades.

“I remember Larry Ringham trying to get me out,” he said. “I’m still holding the record for height (during a crash), though. I think I still got it.”

Mason City boys basketball coach Nick Trask may have had the best description of the Mohawks game against West Hancock on Monday.

A lot has changed this week in the new AP boys basketball poll. In Class 3A, every team changed position, and Norwalk leaped from No. 8 to No. 1.

With just 4 seconds left in the game and his team behind by a point, Garner-Hayfield-Ventura coach Jake Young knew that if the Cardinals got t…

If you like basketball and you happen to live in North Iowa, now is the time to really start getting invested in a local team. The playoffs ar…

Jakob Washington had a good start for the West Fork boys basketball team in the Warhawks’ game at Newman Catholic on Friday night.

In typical quiet and understated fashion, West Hancock star running back Tate Hagen finally decided on his next step. In a social media post o…

Defense has been the foundation of the West Hancock girls basketball program for quite some time.

This is a replica car of the one Don "Bub" Anderson drove in the early 1970s.

Don "Bub" Anderson stands next to a replica car of his on Saturday at the Southbridge Mall.