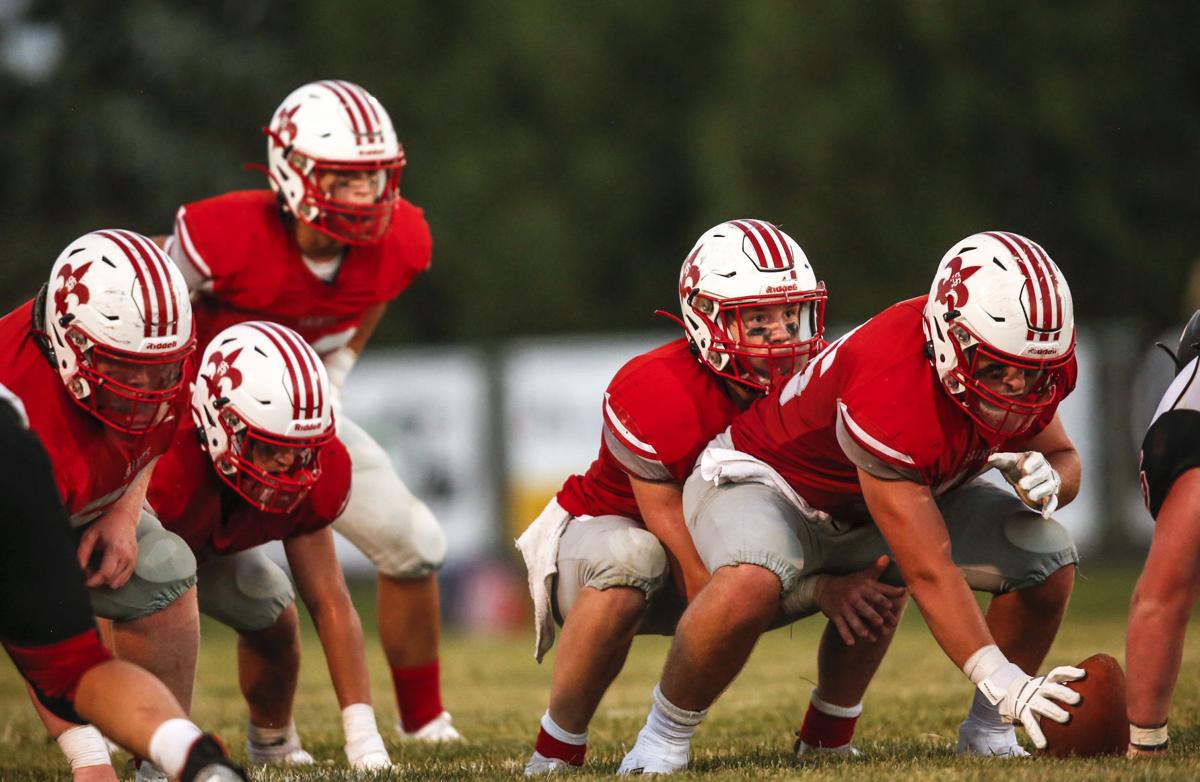 The St. Ansgar offensive line is ready for the snap against Garner-Hayfield-Ventura earlier this season at home. 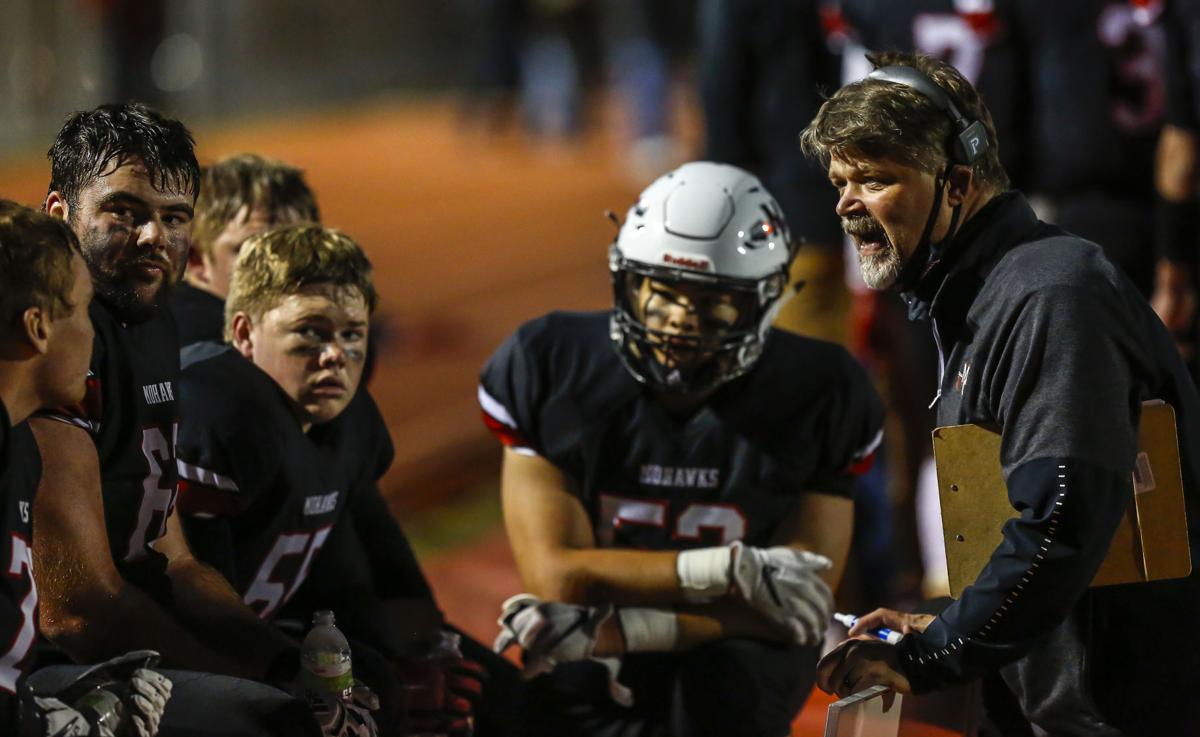 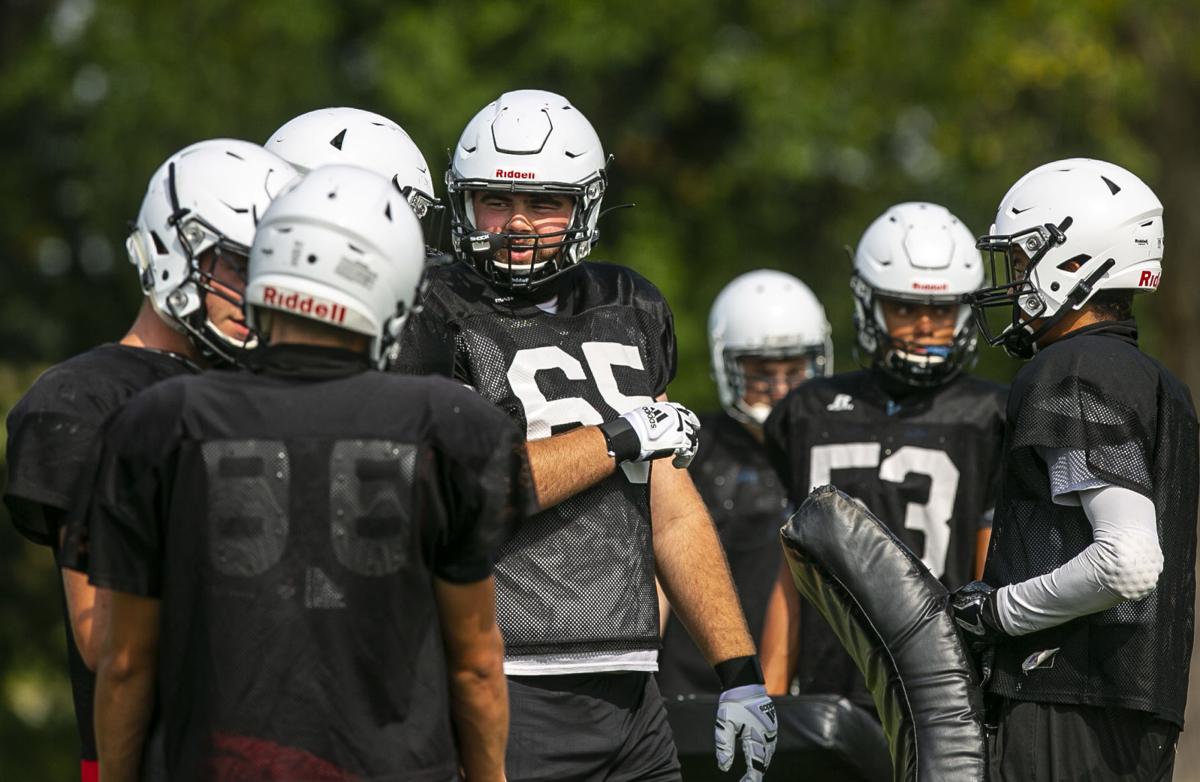 Mason City's Ben Pederson, center, and players walk through a play during practice. 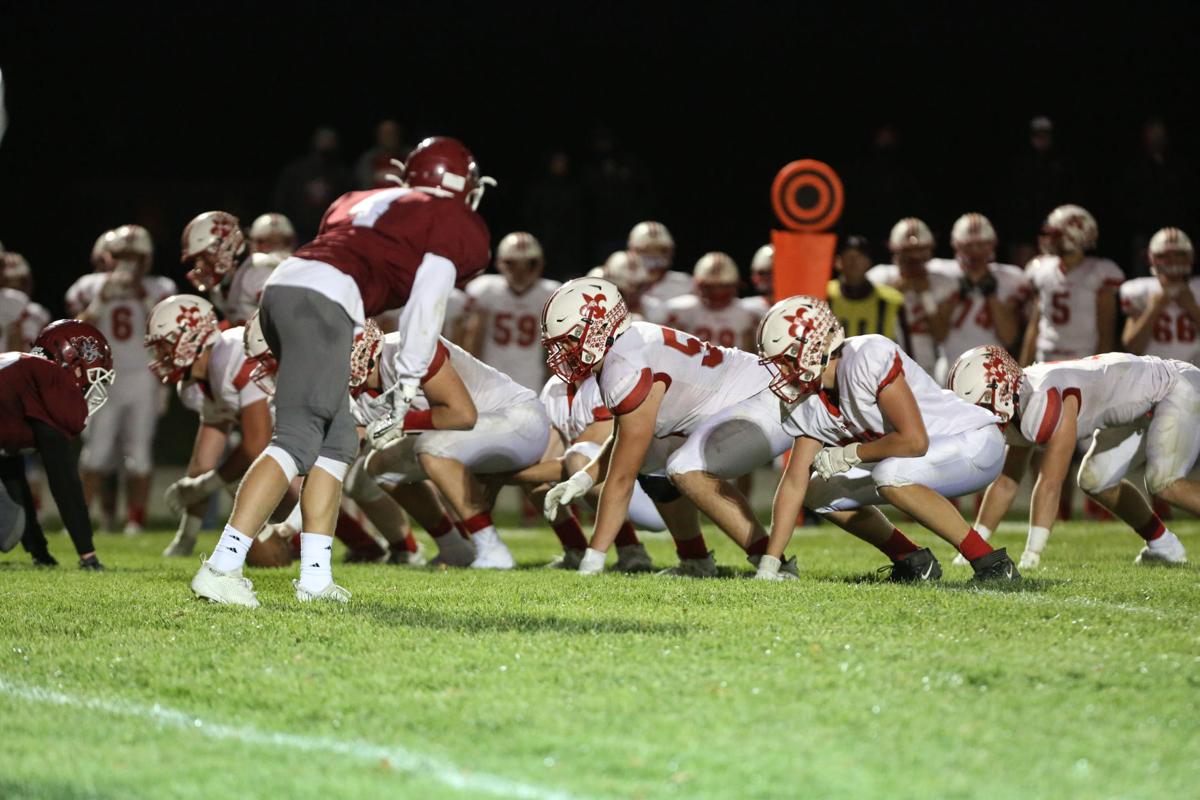 The St. Ansgar offensive line prepares to block on a play against Newman Catholic earlier in the season. 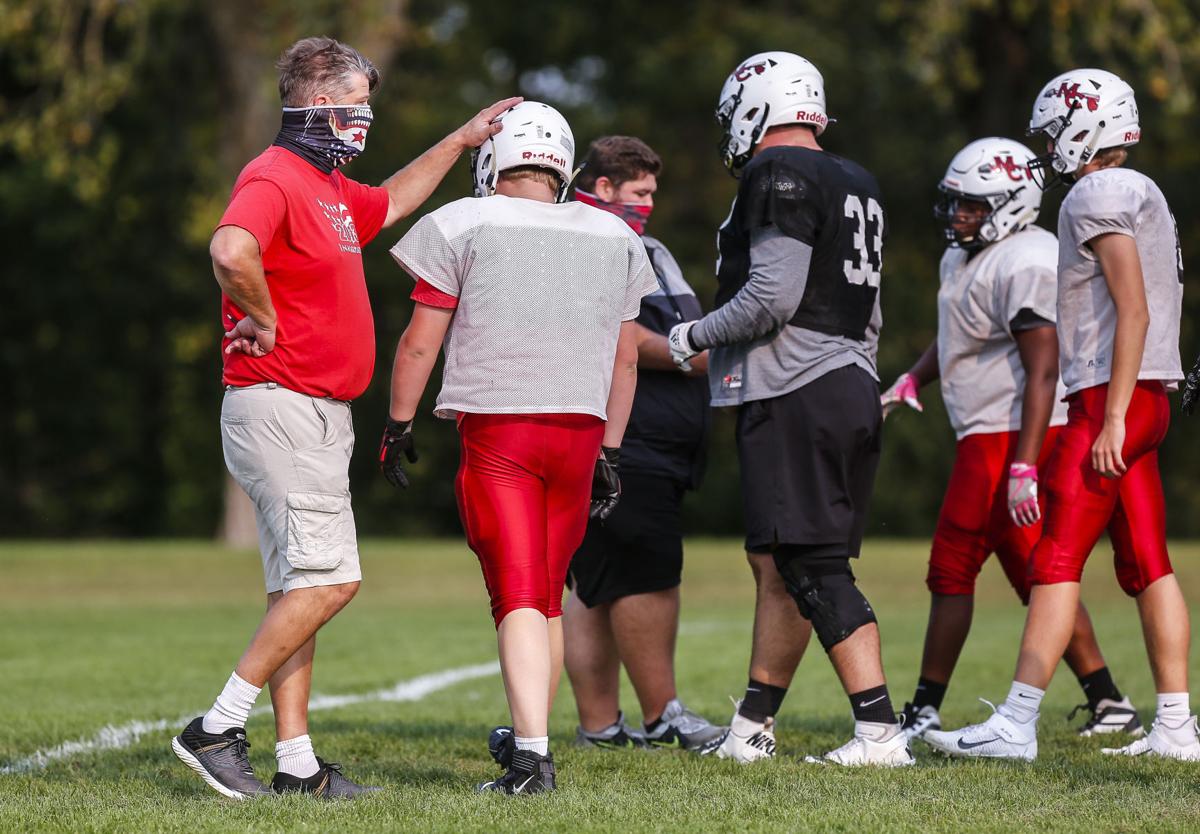 Mason City head coach John Lee pats the helmet of one of his players during practice on Tuesday.

In North Iowa, there are plenty of explosive and talented football players. From St. Ansgar’s Ryan Cole to Mason City’s Carter Thomas, there is no shortage of athletes that provide exciting moments for fans in the stands.

While the skill players provide the fireworks, one thing North Iowa’s players and coaches agree on is that none of it would be possible without one particular group.

What the big guys up front provide is stability. Also friendship, apparently.

“I know I get a lot of the credit, but all the credit should be going to them,” St. Ansgar running back Ryan Cole said after the Saints' win over Lake Mills last Friday night. “Without them, I don’t have a hole to run through, and that touchdown never happens. It’s really just believing in my teammates, this whole game.

“I cannot do anything without them. They are my best friends. They are the best lineman I could ask for, and I love those guys so much.”

While offensive lineman often go overlooked when team MVPs are chosen, that is not so in North Iowa. Whether a team’s offense leans run or pass, very little can be accomplished without the line.

Newman Catholic quarterback Max Burt buys his offensive line donuts every Monday in a show of appreciation for the work they do. This season, the Knights’ line has helped lead the team to a 5-2 record, with two running backs rushing for over 400 yards on the season, and the team’s completion percentage at 65.1 percent.

“You’ve always got to thank your lineman, because without them up there doing the dirty work, none of us backs can really do anything,” Burt said. “It all starts up there in front with those big guys. Having lineman that you are close with as friends, and having a close relationship is really big.”

At West Hancock, the Eagles replaced the vast majority of their offensive line from the 2019 Class A state championship squad, and struggled in the first few weeks, losing to Garner-Hayfield-Ventura and beating Forest City 13-7.

Since week three, the Eagles have exploded, winning five consecutive games by at least 28 points. Head coach Mark Sanger and running back Cole Kelly attribute a lot of that success to the young and athletic offensive line. As the year has gone on, the line has meshed very well.

“I think we’re just doing the same thing as last year,” Kelly said. “We’re trying to perfect what we did last year and in previous years. You’re not going to fix something that isn’t broke.”

At St. Ansgar, where the Saints ended three of the past four seasons in the state semifinals, the culture of toughness on the line starts on the very first day of practice.

“It starts first with what they do in the offseason,” head coach Drew Clevenger said. “We want to improve our bodies strength-wise and quickness-wise. Our kids are on a four-year journey when they get into our program. They typically buy into what we want to do in the weight room, and that is the foundation of what we do in our program.”

At Mason City, the Mohawks have two of the area’s most respected offensive lineman, in senior Ben Pederson and junior Carter Gorder, as well as a head coach that played the position in college, John Lee.

Lee, who blocked for former NFL quarterback Kurt Warner when the two were teammates at the University of Northern Iowa, has leaned on his two right-side stars this year as the team has employed a unique two-quarterback system, with Kale Hobart largely responsible for passing the ball, and Connor Dalen providing the yards on the ground.

Lee sees playing on the offensive line as a valuable lesson for life after school.

“It's always underappreciated," Lee said. "It just is. My offensive line coach once told us, it is the most unselfish position in all of sports. It is designed to glorify everybody else. It is one of the few positions in all of sports that can't score by design.

"What a great trait to go through life. To help others, to help others achieve their goals, you sit back and watch, and hopefully they appreciate it. It is truly a great lesson for life."

The St. Ansgar offensive line is ready for the snap against Garner-Hayfield-Ventura earlier this season at home.

Mason City's Ben Pederson, center, and players walk through a play during practice.

The St. Ansgar offensive line prepares to block on a play against Newman Catholic earlier in the season.

Mason City head coach John Lee pats the helmet of one of his players during practice on Tuesday.