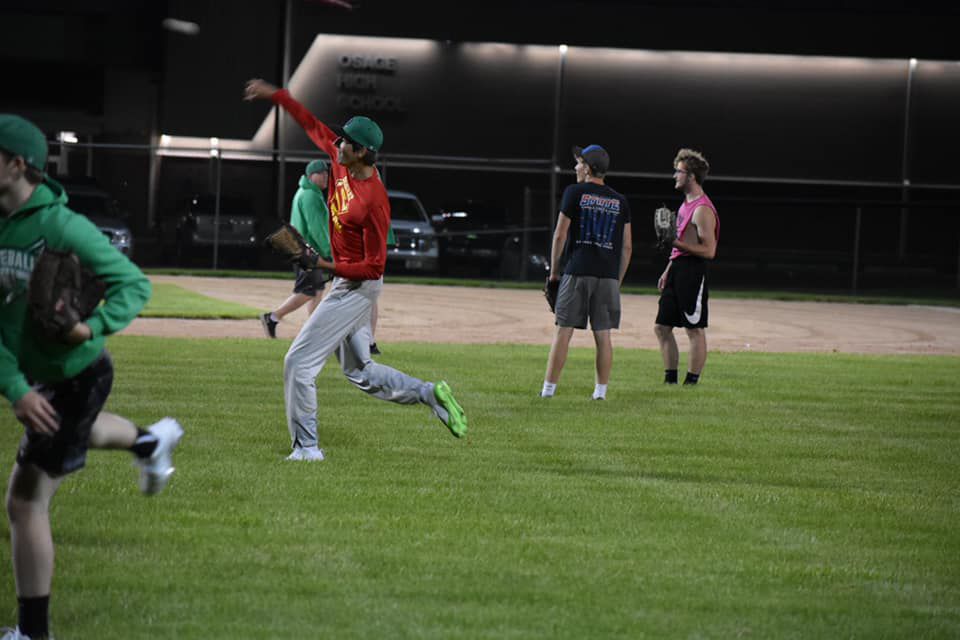 Osage baseball players practice under the lights on Monday morning. Iowa summer sports programs were allowed to begin practicing at 12:01 a.m. on June 1. 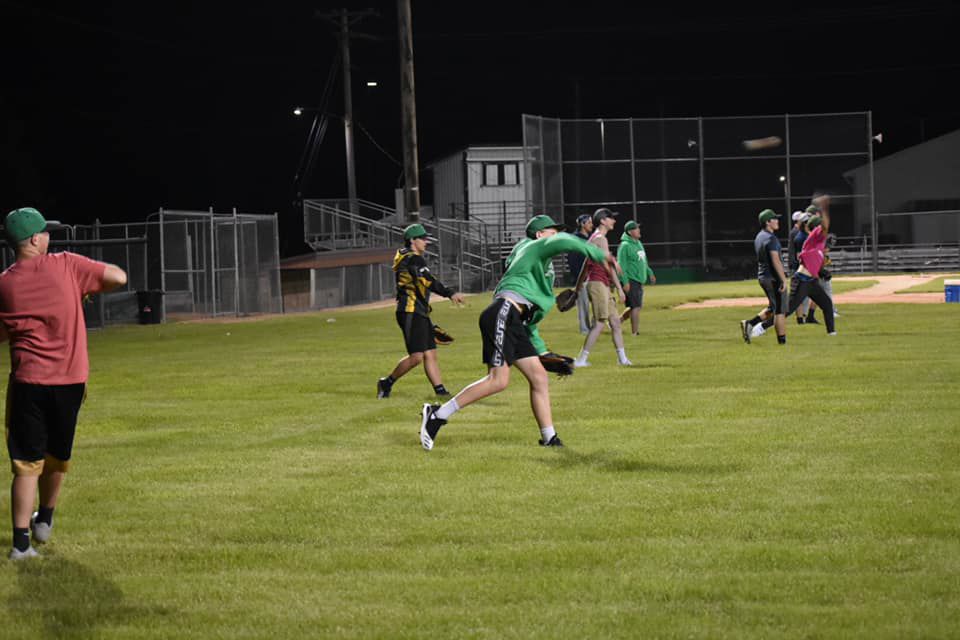 After a several month sports layoff, Osage's athletes were eager to get back on the field. As the clock struck midnight, the Green Devils ran onto the field. 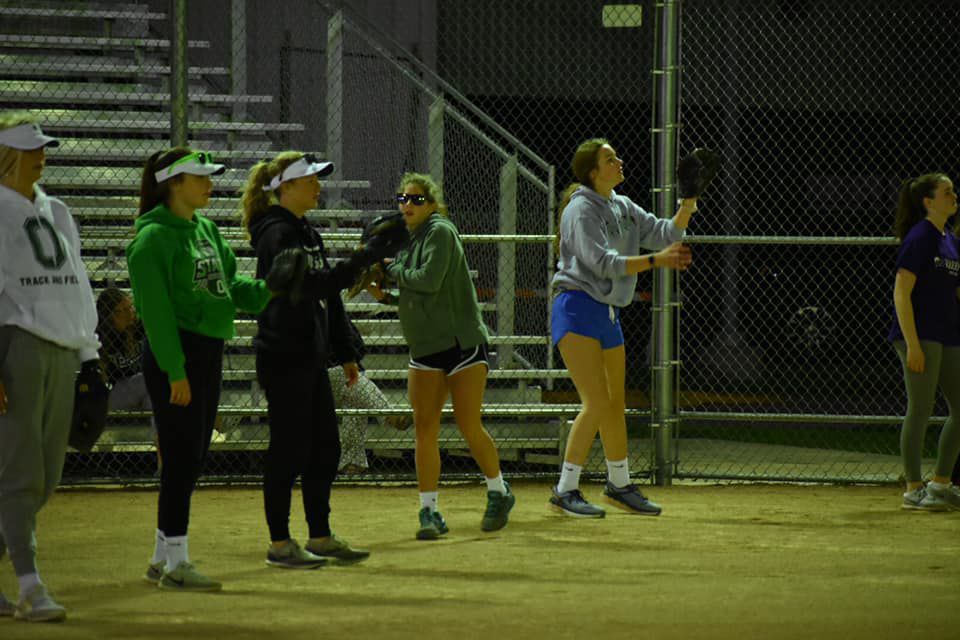 It can get quiet in North Iowa at nighttime, but if you stood on your porch and listened closely as Sunday night turned into Monday morning, you might have heard the long-awaited sounds of summer echoing from a nearby park.

At midnight on June 1, Iowa’s high school baseball and softball teams were legally allowed to begin practicing for the upcoming season. After a nearly three months sports layoff since the spring season was canceled in April, several schools like Osage and North Iowa were eager to get started, beginning practice at the stroke of midnight.

“They were overwhelmingly in favor of that idea,” North Iowa head baseball coach Jake Meinders said. “It was definitely an exciting thing, it was different than what we were used to. It was exciting to get out there and get started.”

Right now, Iowa high school sports are the only game in town, or the country, for that matter.

The Iowa summer season is the first sports season to return since the COVID-19 pandemic hit the country in March. Not even the professional leagues have returned yet.

“It does feel a little different,” North Iowa senior Hunter Meinders said.  “Nobody else, like the professional or college sports are playing baseball. That makes it extra special. There are a lot of other people that missed out on their junior and senior season and that sucks a lot. I’m thankful to have somewhat of a season, even if it is cut down a little bit.”

On Sunday night/Monday morning, the focus was just on finally getting back onto the field. Out in Buffalo Center, most of the baseball team started arriving around 11:30 p.m. As the clock ticked closer to midnight, the players started counting down the minutes until they were allowed to begin playing ball again.

“Once everybody was there, we started off our practice with a lap around the field, and then we waited around home plate,” North Iowa junior Kade Hobbs said. “The second it hit 12:01, we took off. It was a nice little celebration that we had.”

In Osage, the coaches gathered together and counted down in New Year’s Eve fashion before turning on the facility lights. Once practice began, even though it took place in the wee hours of the day, the players' energy was sky-high.

“There was a lot of energy,” Osage head baseball coach Mike Henson said. “It showed a little bit. We had a few more errant throws and a little more zip on the baseball, just because they were so eager to get out there. It was a lot of fun. It’s a great atmosphere to be around.”

At Osage's softball practice, energy was also plenty high. The squad was in great spirits, and according to head coach Ryan Huffman, it didn't feel like the middle of the night.

"It felt like it was the middle of the afternoon," Huffman said. "At one point they had some music going, and I had to turn the music down a little bit. My concern was that I didn't want to wake the neighbors. They were having a great time."

For small schools like North Iowa, there are some pluses to the current practice situation. With a small student population, a lot of students are four-sport athletes, which leads to some challenges at the beginning of baseball and softball season.

In addition to getting the chance to play ball again, a lot of Monday’s excitement came from just being able to gather as a team. Since COVID-19 led to school closures and quarantines in March, many of the players have not been able to gather with their teammates and friends. On Monday morning they finally reunited under the lights, with the promise of summer brightening their moods.

“There was a lot of us that were aching and craving to not only get out there and play our favorite sport, but to get together as a team,” North Iowa junior Kade Hobbs said. “With social distancing, a lot of us haven't got to see each other. I think that will bring us even closer together as a team. We are all so grateful for the baseball season they gave us this year. It was feed for the craving.”

Before Jackie Robinson, black players were essentially banned from playing major league baseball. But that doesn't mean they weren't playing i…

Let’s face, you’re bored. If you are reading this article, it probably means that you have at least a passing interest in sports, and right no…

Local athletes stay ready for summer sports: "Right now, it's looking like it could be a possibility"

With spring sports seasons getting canceled all over the country, high school and college teams everywhere have had to hang up their cleats, p…

With the news coming down on Wednesday that Iowa’s summer sports can begin practicing on June 1, area coaches and players took to social media…

Osage baseball players practice under the lights on Monday morning. Iowa summer sports programs were allowed to begin practicing at 12:01 a.m. on June 1.

After a several month sports layoff, Osage's athletes were eager to get back on the field. As the clock struck midnight, the Green Devils ran onto the field.