Although the Mason City volleyball team came out swinging at home on senior night against Fort Dodge, the Mohawks struggled to steal a set win and gain momentum. The Dodgers beat the Mohawks in three straight sets on Tuesday night.

Fort Dodge and Mason City slugged it out in the first set, but the Dodgers came out with a 25-19 win. The Mohawks couldn't gain momentum in the second set, falling 25-14. In the third and final set, Mason City fell, 25-18.

"We got off to a good start with excellent energy and aggressive play," head coach Curt Klaahsen said. "However, Fort Dodge's tough play at the net and excellent overall defense kept us off balance all night."

Webster City 3, Clear Lake 2: The Clear Lake volleyball team battled with Webster City on senior night, but couldn't pull out the win against the Lynx. The match needed all five sets to decide a winner, but Webster City ultimately came out on top, 3-2.

The Lions started out hot with a 25-13 victory in the first set. But the Lynx showed they weren't about to be blown out, winning the next two sets, 25-14 and 25-17, respectively. In a close fourth set, the Lions evened the match with a 25-21 win. In the fifth and final set, the Lynx stole a senior night victory away from the Lions with a 15-7 win.

There were no additional stats available for Clear Lake. The Lions are now 6-12 on the season.

The Cadets opened up the match with a 25-13 victory in the first set. The Bulldogs couldn't get much going offensively and lost, 25-9 and 25-17, respectively.

The Bulldogs were balanced on offense. Six different hitters had two or more kills and junior Kortney Dunt led with four. Junior Aja Sheppard had nine assists. HDC falls to 2-7.

North Butler 3, Rockford 0: North Butler needed only three sets in Rockford to beat the Warriors on Tuesday night. The Bearcats won each of the first two sets, 25-10, and the last set, 25-9.

Rockford posted six total kills and three assists throughout the match. The Warriors drop to 1-18 on the season with the loss.

For the Vikings, the team had five total kills – each by a different player. There were no stats available for the Green Devils. Osage improves to 21-2 and Northwood-Kensett falls to 3-6.

Senior Erica Eenhuis was on fire with 18 kills on Tuesday night. Junior Chloe Frank also had 11 kills and 29 digs in the win. Senior Maddie Graham had 25 assists. GHV moves to 7-9 on the season.

Charles City 3, Oelwein 0: The Charles City volleyball team traveled to Oelwein on Tuesday night and had a strong showing. The Comets beat the Huskies in three sets.

It seemed the Comets got better as the night went on. The scores of the three sets were 25-14, 25-11 and 25-7, respectively. Junior Kaylee Anderson had eight kills and senior Danielle Stock had seven. Junior Ashlyn Hoeft had 16 assists and three aces as well.

The Warhawks had real trouble on offense, losing the first set 25-10. The next two didn't get much better, as the scores of the final two sets were 25-13 and 25-12, respectively. There were no additional stats available for the Warhawks.

The Clear Lake boys cross country team had a strong showing at Eagle Grove on Tuesday, winning the boys team meet with 50 points. The Garner-Hayfield-Ventura boys placed fifth with 138 points.

On the girls side, GHV placed fourth with 100 points and Clear Lake finished seventh with 140 points.

GHV's Abby Christians continued her dominant season by placing first with a time of 20:56.58. Katelyn Knoll also placed in the top 10 for the Cardinals. Her time of 23:02.50 was good for ninth place. Clear Lake's highest finisher was Jadyn Heesch, who placed 21st with a time of 24:58.80.

Newman Catholic also traveled to Dike-New Hartford to compete on Tuesday night in the small school division. The girls placed second with 63 points and the boys placed first with 48 points.

Osage and Charles City competed in the large school division at Dike-New Hartford. The Charles City girls placed third with 88 points and Osage finished 10th with 251.

On the boys side Charles City placed fourth with 118 team points and Osage finished eighth with 201 points.

The top finisher for Osage was sophomore Keagan Hennessey, who's time of 18:21.6 was good for 10th. Senior Alex Bauer from Charles City finished 11th with a time of 18:22.4.

Highlights for the team was a win in all three relay races. Rosa Monarch, Niah Litterer, Aspen Cole and Kate Edgerton all had individual wins as well for the Mohawks. The squad also had first, second and third place finishes in the 100-yard backstroke.

The St. Ansgar and Newman Catholic volleyball teams played an intense first set, but the Saints were able to come away with a three-set victory on Tuesday night.

When Jalyn Hovenga's shot bounced off the arm of a Lake Mills' defender on Tuesday night, the Forest City volleyball team collectively raised …

Newman Catholic football fans only got to pack the home field stands twice this season, but they saw history made nonetheless.

The Charles City girls basketball team will have a new leader this season, and it will come from a familiar face.

Back in the rankings: St. Ansgar volleyball wins 13-straight 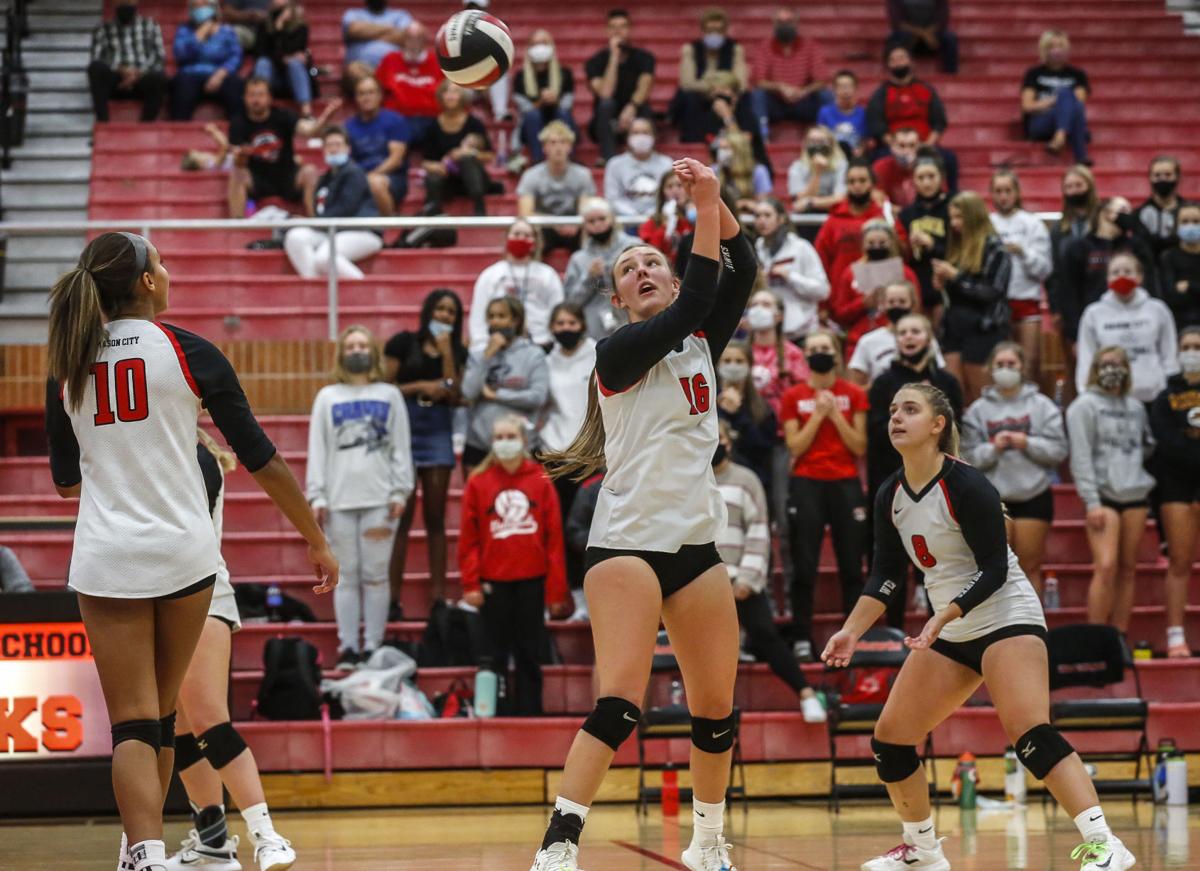 Mason City senior Tiegan Barkema bumps the ball over the net against Fort Dodge in Mason City on Oct. 7.