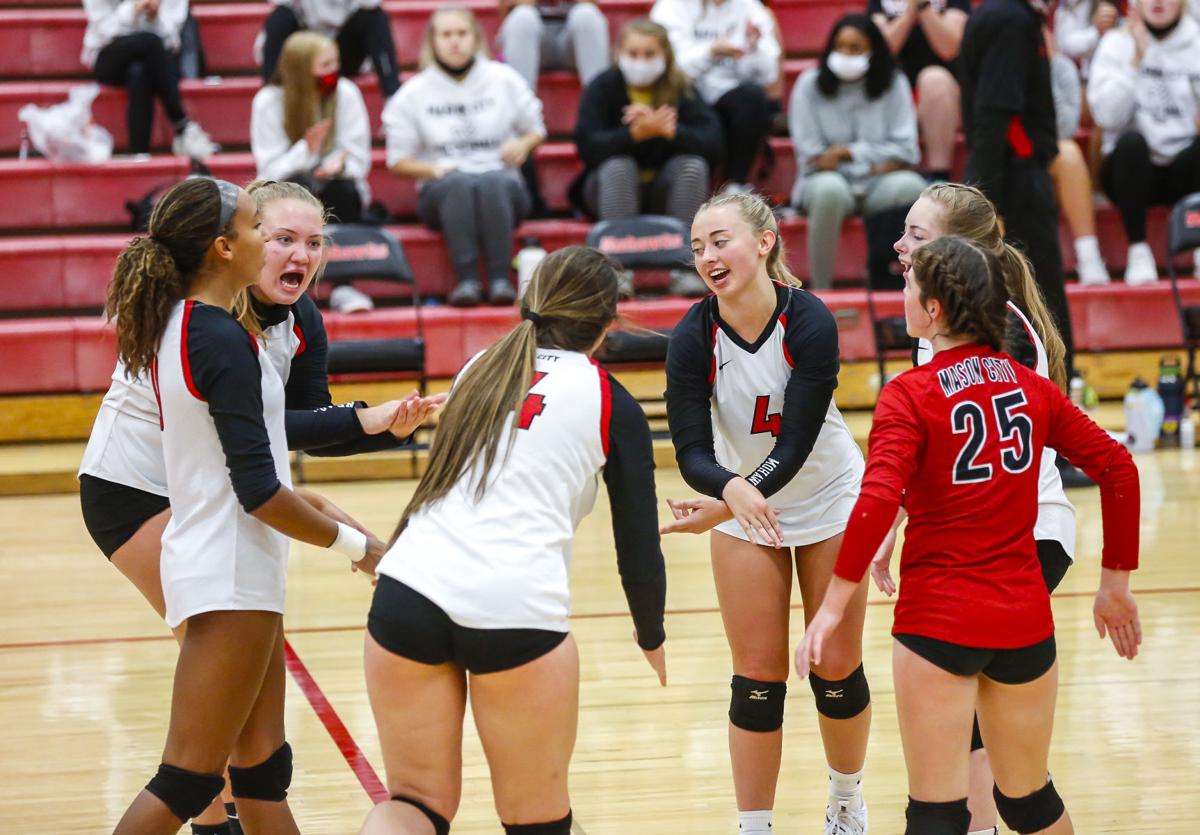 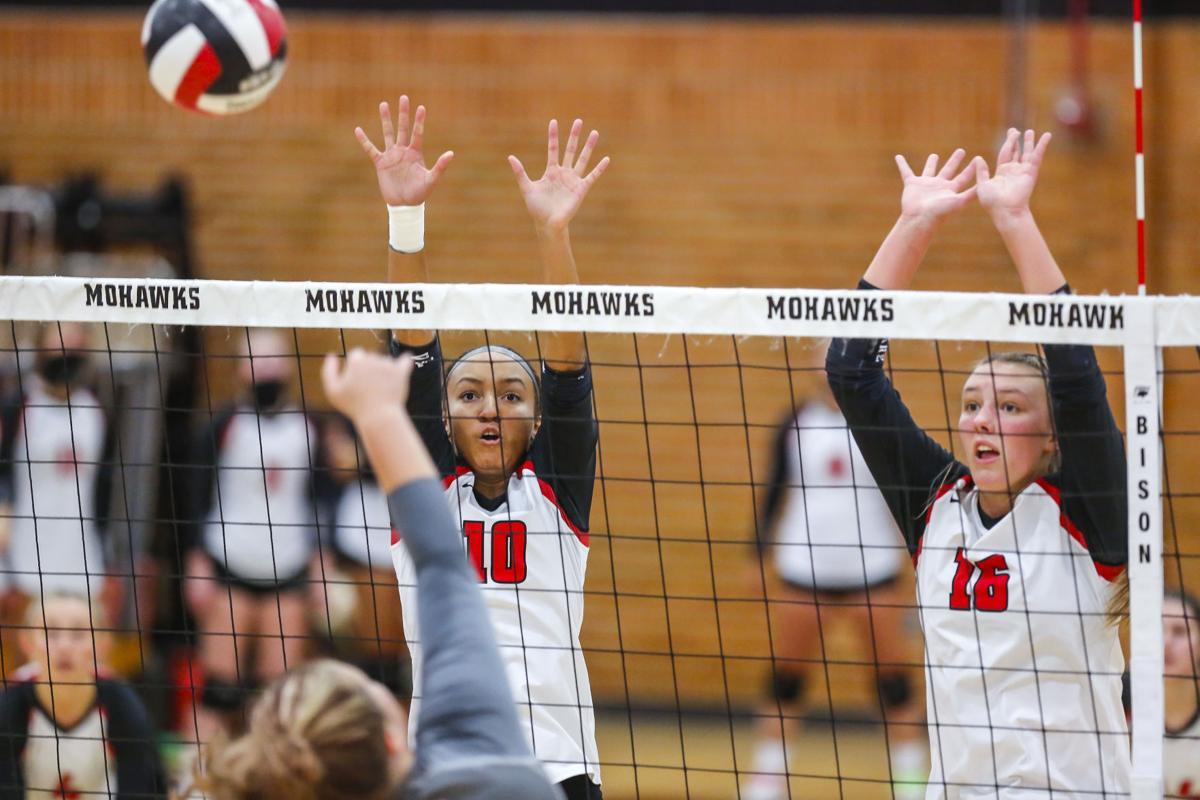 Mason City's Jada Williams (10) and Tiegan Barkema (16) jump for a block on Thursday in the Mohawks' home triangular against Clear Lake and Charles City.

Injuries have had a big impact on the Mason City volleyball team in the past week. On Thursday night, the Mohawks lost setter Bre Lowe to a hurt leg. On Saturday, the injury bug bit yet again, when libero Kylie Trappe went down as well, and the Mohawks lost a pair of matches at the Southeast Polk Triangular.

The Mohawks fell to Dowling in three sets, by scores of 25-10, 25-9, and 25-9. Tiegan Barkema led the team with five kills in that match, while Emma Hollander had seven digs.

The team has now dropped four straight matches, and sits at 1-9 on the season.

"We struggled to find our rhythm all day without our injured setter, Bre, and then lost our libero Kylie Trappe early, also to injury," head coach Curt Klaahsen said. "The effort was there, we just need better overall execution. Dowling showed why they are one of the best teams in the state, with high speed volleyball. We play Southeast Polk again Thursday, so we can judge our improvement again."

The Osage volleyball team swept five consecutive matches in the Osage Tournament on Saturday, as the team improved its perfect record to 9-0 on the season. The Green Devils have still not lost a set this year.

In the championship match, the Green Devils beat Dike-New Hartford by scores of 25-22, and 25-17. Dani Johnson finished the day with 43 total kills, while Jaden Francis finished with 59 digs.  Ellie Bobinet had a total of 114 assists.

"Today was a real test of where we are at as a team," head coach Bryan Tabbert said. "Our home tournament is always tough, and this year was no exception. As coaches, we were especially proud of the way the girls played at a high level all day long."

Osage will play again on Tuesday, against Nashua-Plainfield.

The Newman Catholic volleyball team went 3-1 in tournament play on Saturday, as the Knights lost to Central Springs in two sets, but beat Rockford, West Hancock, and Clarksville.

Newman is 7-5 on the season. The Knights will play on Tuesday, against Northwood-Kensett.

The Hampton-Dumont-CAL volleyball team split a pair of matches at Belmond-Klemme on Saturday, as the Bulldogs beat Gideon-Ralston in two matches, and fell to Belmond-Klemme, 3-2.

The Bulldogs are 2-3 on the season, and will play at Humboldt on Thursday night.

The Central Springs volleyball team had a great showing at its home tournament on Saturday. The Panthers won all four matches they played in, and didn't lose a single set.

The closets set for Central Springs was a 25-15 win over West Hancock in the final match played. Other than that, the Panthers dominated. Senior Kylie Hanft had 35 assists in the four matches and senior Ellacyn Coleman had 19 kills.

The Panthers are now 7-4 on the season.

Rockford was able to steal a set win from West Hancock in its final match on Saturday, but couldn't pull out a victory in any of the matches during the tournament.

In the four matches, junior Emma Muller had nine kills and junior Aryssa Smith had eight. Sophomore McKinnley Hoffman led the Warriors with 16 total kills also. The Warriors are now 1-11 on the season.

The Forest City volleyball saw its perfect record end on Saturday, as the Indians dropped four of five matches in the Osage tournament. Forest City managed to snag a 2-0 victory over Charles City, and won one set against Waverly-Shell Rock, but struggled in its remaining games. Junior Shae Dillavou finished with a team-high 26 kills among the Indians' five games.

After Saturday, Forest City's record is 5-4 on the season. The Indians are in second place in the Top of Iowa West behind Lake Mills, and will play on Tuesday at West Hancock.

The West Hancock volleyball team dropped three of its four matches at the Central Springs tournament on Saturday, as the Eagles only victory came in a 2-1 win against Rockford. Ann Horstman finished the day with a team-high 17 kills.

With the victory, the Eagles snapped a five-game losing streak, and now sit at 2-10 on the year. They will play on Tuesday, against Forest City.

The Charles City volleyball team snagged one win in four matches on Saturday at the Osage tournament, as the Comets could only manage a 2-1 victory over Gilbert. The losses snapped a four-game winning streak for Charles City. Junior Kaylee Anderson finished the day with a team-best 21 kills.

Charles City is now 6-4 on the season, and will play Decorah on Tuesday night.

Young Rockwell racer no stranger to success on the track

Carter Koop is no stranger to racing success.

Waldorf soccer cancels next three games due to COVID-19

The Waldorf University men's soccer team has cancelled its next three games after three players tested positive for COVID-19.

Mason City's Jada Williams (10) and Tiegan Barkema (16) jump for a block on Thursday in the Mohawks' home triangular against Clear Lake and Charles City.