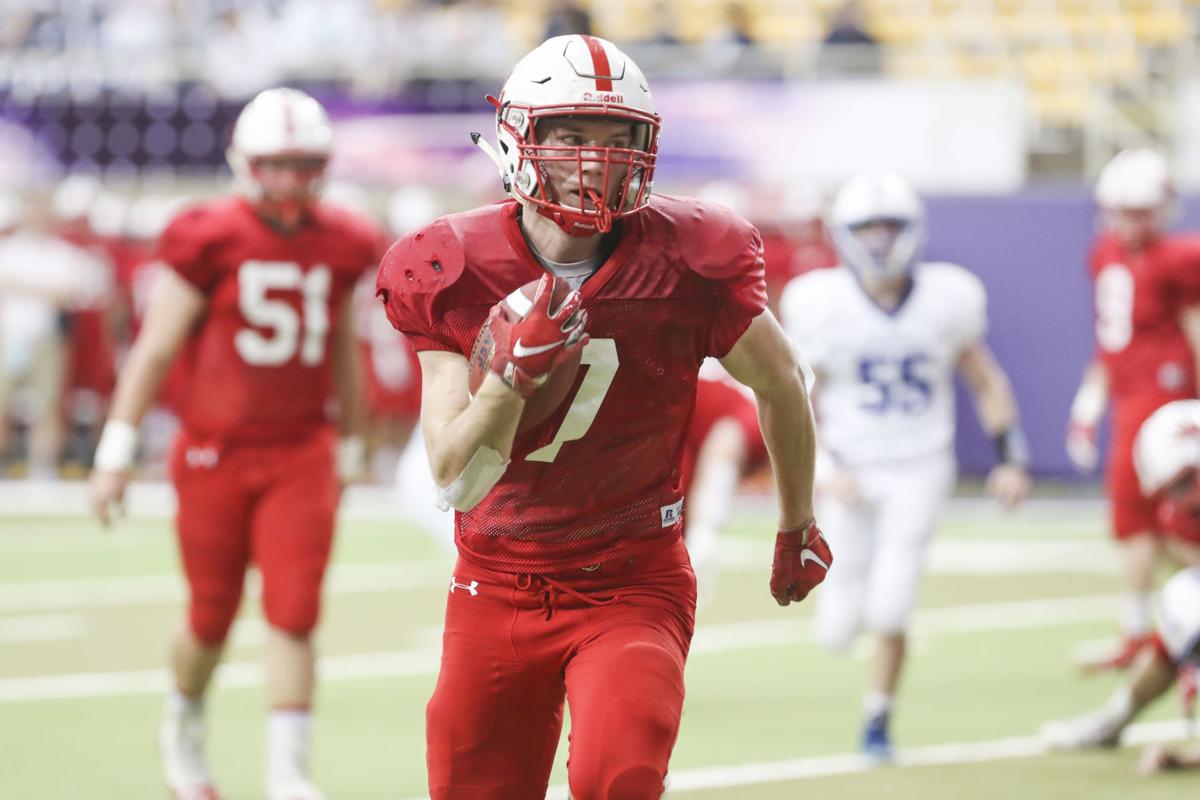 West Hancock's Josef Smith runs the ball in the end zone for a touchdown during the Class A State Semifinal game against Woodbury Central on Nov. 15, 2019. 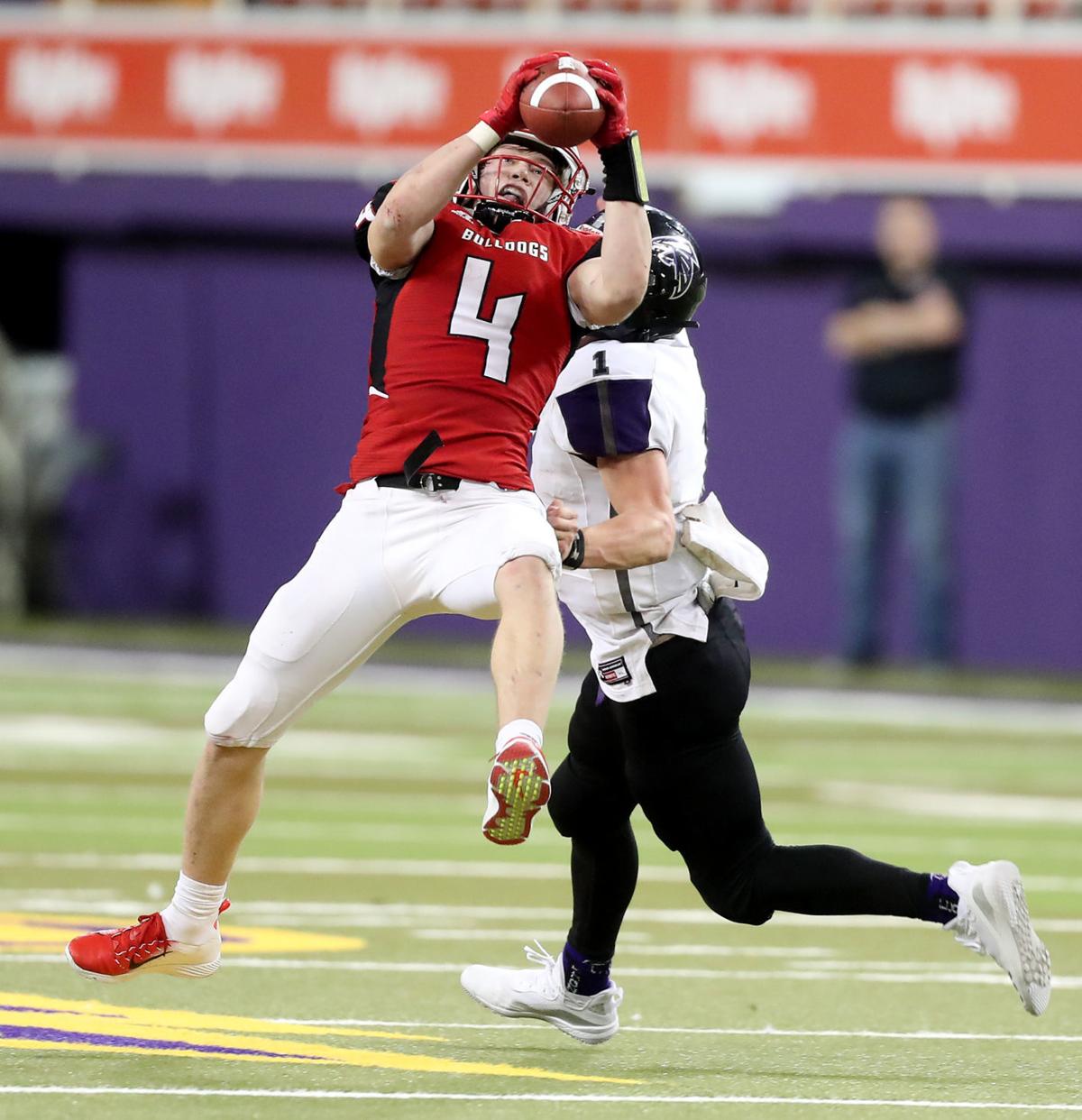 Algona's Wyatt Wegener tries to pull in a pass in front of OABCIG's Cooper Dejean during the class 2A state high school football semifinals at the UNI-Dome in Cedar Falls, Iowa, Saturday, Nov. 16, 2019. 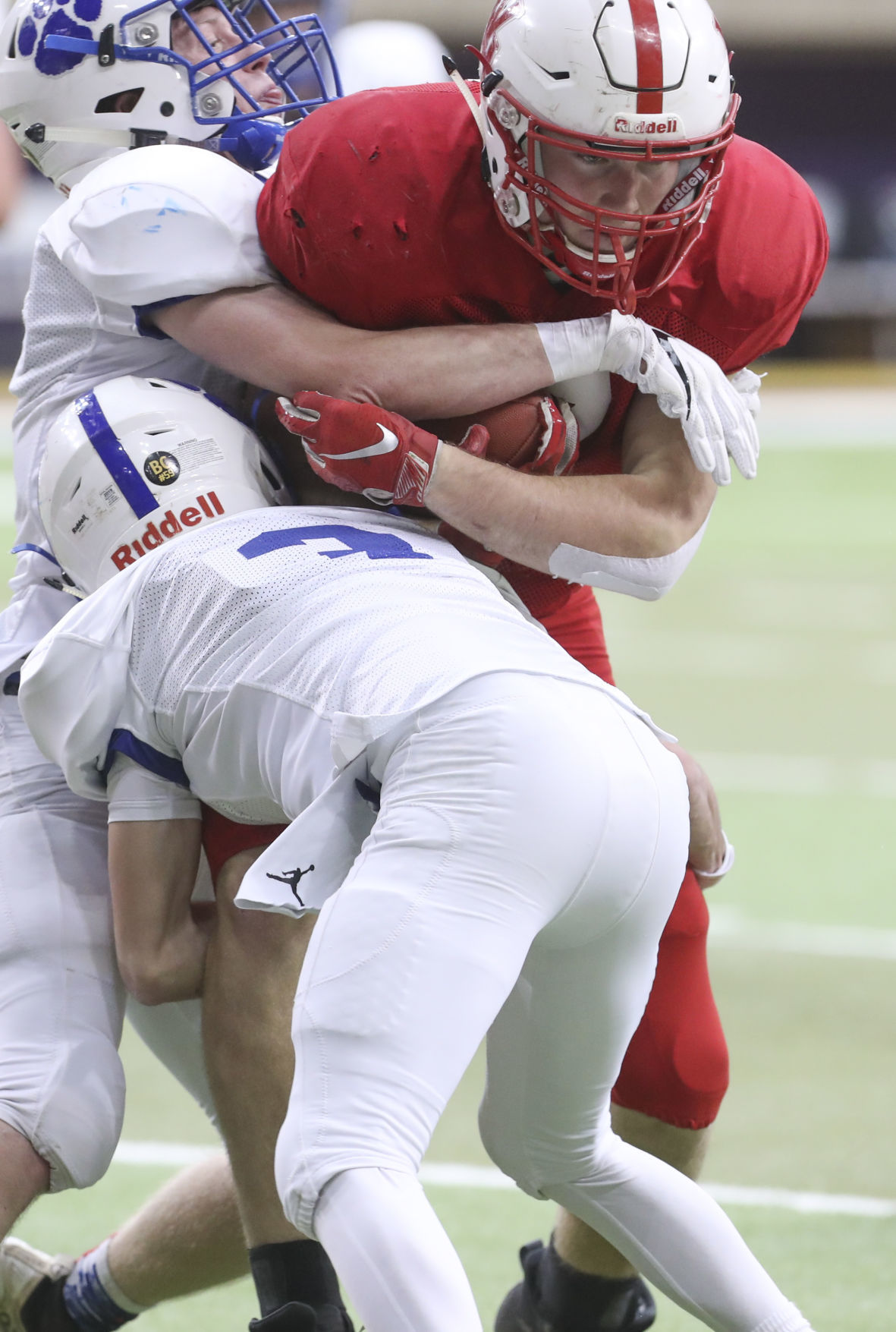 West Hancock's Josef Smith is tackled by Woodbury players as he runs the ball during Class A State Semifinal game on Nov. 15, 2019. 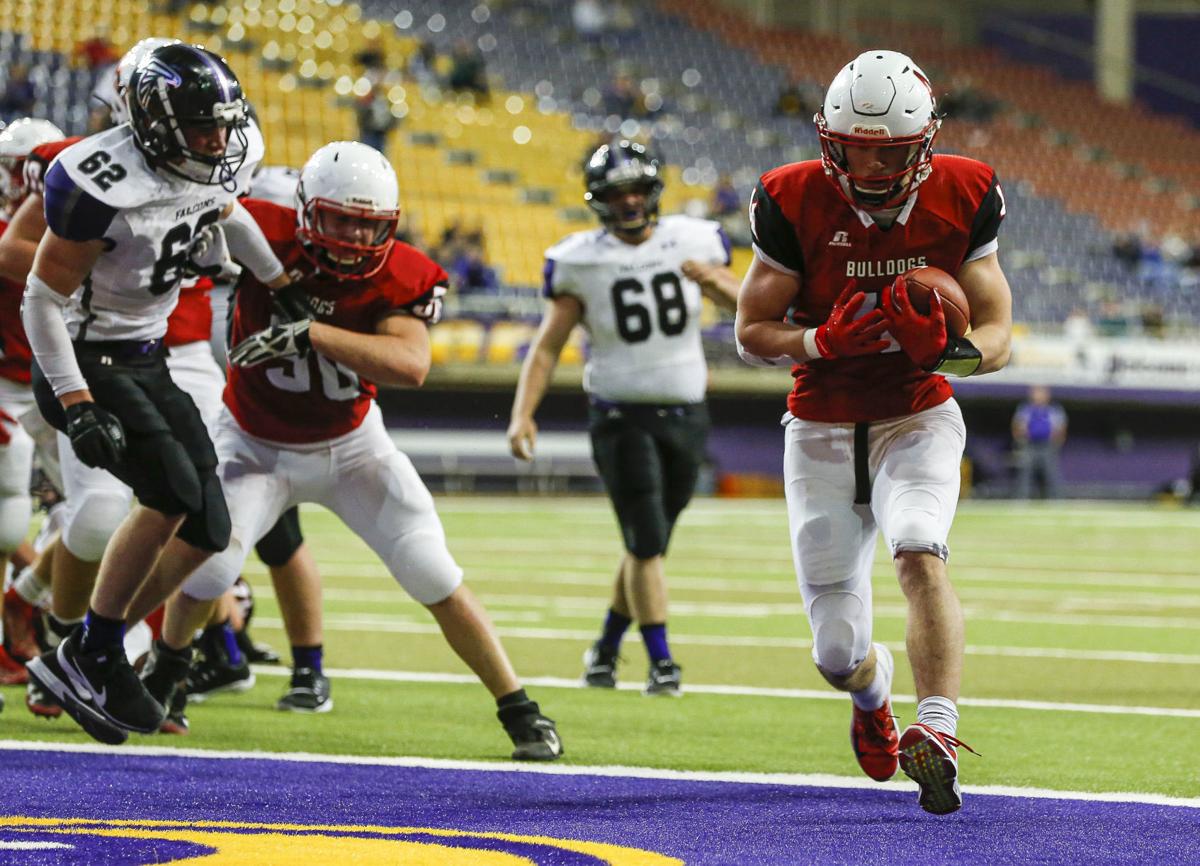 Algona senior Wyatt Wegener carriers the ball into the end zone for a touchdown against OABCIG Saturday during the semifinal round of the state football championships at the UNI-Dome in Cedar Falls Nov. 16, 2019.

Last summer, Algona’s Wyatt Wegener and West Hancock’s Josef Smith were classmates in a life-guarding class. Later this year, they might be appearing together on a far bigger stage.

Both Wegener and Smith will go into the 2020 football season as preferred walk-ons for the Iowa Hawkeyes football team, which means that they are guaranteed a spot on the team, but they won’t receive scholarships right away. They still both have a chance to win scholarships, but will have to do so by impressing the coaching staff on the field.

Smith, who was a member of the 2019 West Hancock Class A state championship squad, will go into training camp as a linebacker. At 6-foot-5 and over 200 pounds, it’s easy to see why Smith is an appealing prospect.

“He has good movement skills, overall athleticism and a rangy frame. Speed and length are always positives in recruiting,” Niemann said. “We are planning to start him off on defense, but he is versatile enough that if he can contribute sooner and help the team on offense, we would consider that option also.”

Smith’s senior year at West Hancock was cut short due to the COVID-19 shutdowns, but he has been training every day from the workout packets he received from the Hawkeye coaching staff. Though Smith was already in pretty good shape, the new workouts have been grueling.

“They are really tough at the start,” Smith said. “The reps are really high. It gets to the point on the chest day where my arms just feel like jello. I push through them and it hasn’t gotten easier by any means, but I’m more prepared for it.”

Just over 20 miles up Highway 18 from Smith, Wegener has also been doing his best to get ready for his own move to Iowa City. Now, nearly three months since his most recent sporting event, Algona's 73-71 loss to Ballard in the basketball substate semifinals,  Wegener is eager to get back on the field. Since the disappointment of the track season being canceled, he is glad to have something to distract him.

“I’m excited to get out with the new teammates, and play sports again,” Wegener said. “Me and my friend Samonte (Bawden), we had big goals for this year for track. With football coming up soon, it gives me something to look forward to, and work towards.”

Like Smith, Wegener is not guaranteed a scholarship, but with an ability to dominate at several different positions, it doesn’t seem far-fetched that one is in his future.

Going into the season, Wegener will first get looks as a wide-out, with the chance of trying out as a running back, a safety, or a linebacker. Wegener is fine with any of those, just so long as he gets a chance to play.

“My goal is to be the best football player I can be, at whatever position that may be,” Wegener said. “Iowa will figure that out.”

While they don’t know each other super well, Smith and Wegener have been impressed by what the other has accomplished on the field.

This past season, Smith finished with 1,270 yards on the ground with 18 touchdowns for West Hancock, along with a team-high 11 receptions and 202 receiving yards. On defense, he had 27.5 tackles on the season.

Wegener was the Bulldogs' top receiver and rusher, finishing with 1,422 rushing yards and 708 yards through the air. Both were named to the Globe Gazette’s 2019 All-Area Football Team.

“I’ve heard a lot about him,” Wegener said of Smith. “I’ve seen him play, and he is a big physical, strong kid. He’s a really good athlete, how I see it.”

“He had a really good development sophomore to junior year, and I was pretty impressed by that,” Smith said. “He’s got speed and really good balance. I watched his highlight videos and they were fun to watch. He’s pretty exciting.”

Both players are accomplished athletes, but will go in with plenty to prove this fall if they want to see minutes at the Division I level.

"It seemed like there are a lot of people there that are just like me,” Smith said of the Iowa program, “They build them up, and actually train and develop all these guys. That is what appealed to me the most. I always have been looking for someone who really knows what they are talking about who can develop me, and that feels like what they offer.”

Shane Lantz covers sports for the Globe Gazette. You can reach him at Shane.Lantz@GlobeGazette.com or by phone at 641-421-0526. Follow Shane on Twitter at @ShaneMLantz.

There are certain names that are synonymous with the schools at which they taught or coached for decades. Bob Hilmer at Forest City. Bob Sange…

Reynolds: Prioritize both health and economy in coronavirus pandemic

Gov. Kim Reynolds expressed confidence Monday in her “phased-in” plan to jump start the state’s economy, saying Iowa businesses and residents have responsibly taken safe, measured steps to balance competing issues with the desire of keeping the spread of COVID-19 in check.

Democratic U.S. Senate hopefuls touted their Iowa roots and progressive politics, but also showed their differences on issues from health care, free college and the proper response to the coronavirus pandemic.

It's time to take to the water.

After more than a decade as an assistant basketball coach, Jay Hiscocks is finally getting the chance to lead a program of his own.

Is the lifting of more COVID-19 restrictions in Iowa on the horizon?

Gov. Kim Reynolds pointed to improving COVID-19 trend lines in hinting Tuesday she may be looking at lifting more restrictions on businesses and cultural amenities.

West Hancock says no to participating in NIACC regional center

West Hancock CSD school board unanimously decided to decline participation in NIACC's regional center during its meeting Monday, May 18.

After initially postponing prom to June 6 at the beginning of May, West Hancock High School decided to cancel prom.

West Hancock's Josef Smith runs the ball in the end zone for a touchdown during the Class A State Semifinal game against Woodbury Central on Nov. 15, 2019.

Algona's Wyatt Wegener tries to pull in a pass in front of OABCIG's Cooper Dejean during the class 2A state high school football semifinals at the UNI-Dome in Cedar Falls, Iowa, Saturday, Nov. 16, 2019.

West Hancock's Josef Smith is tackled by Woodbury players as he runs the ball during Class A State Semifinal game on Nov. 15, 2019.

Algona senior Wyatt Wegener carriers the ball into the end zone for a touchdown against OABCIG Saturday during the semifinal round of the state football championships at the UNI-Dome in Cedar Falls Nov. 16, 2019.