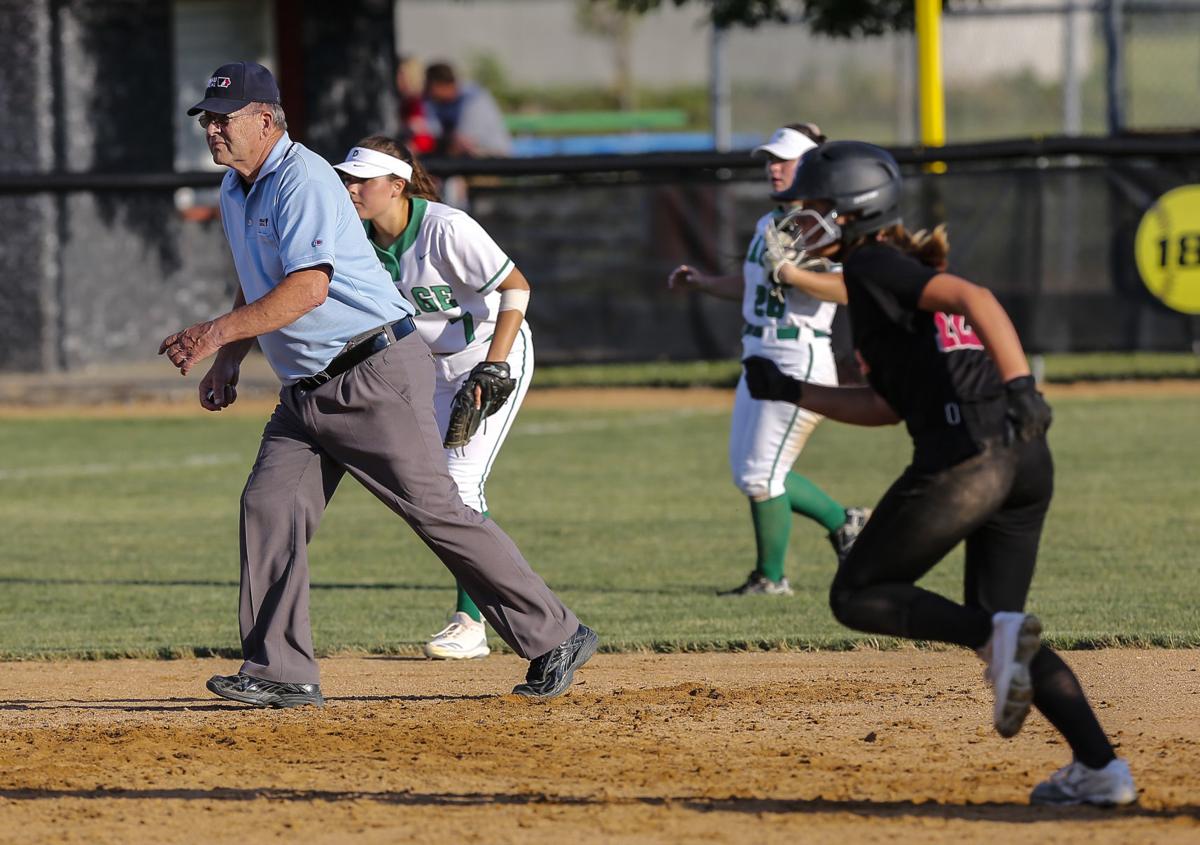 Umpire Jim Brackey watches a play at a recent softball game between Garner-Hayfield-Ventura and Osage. 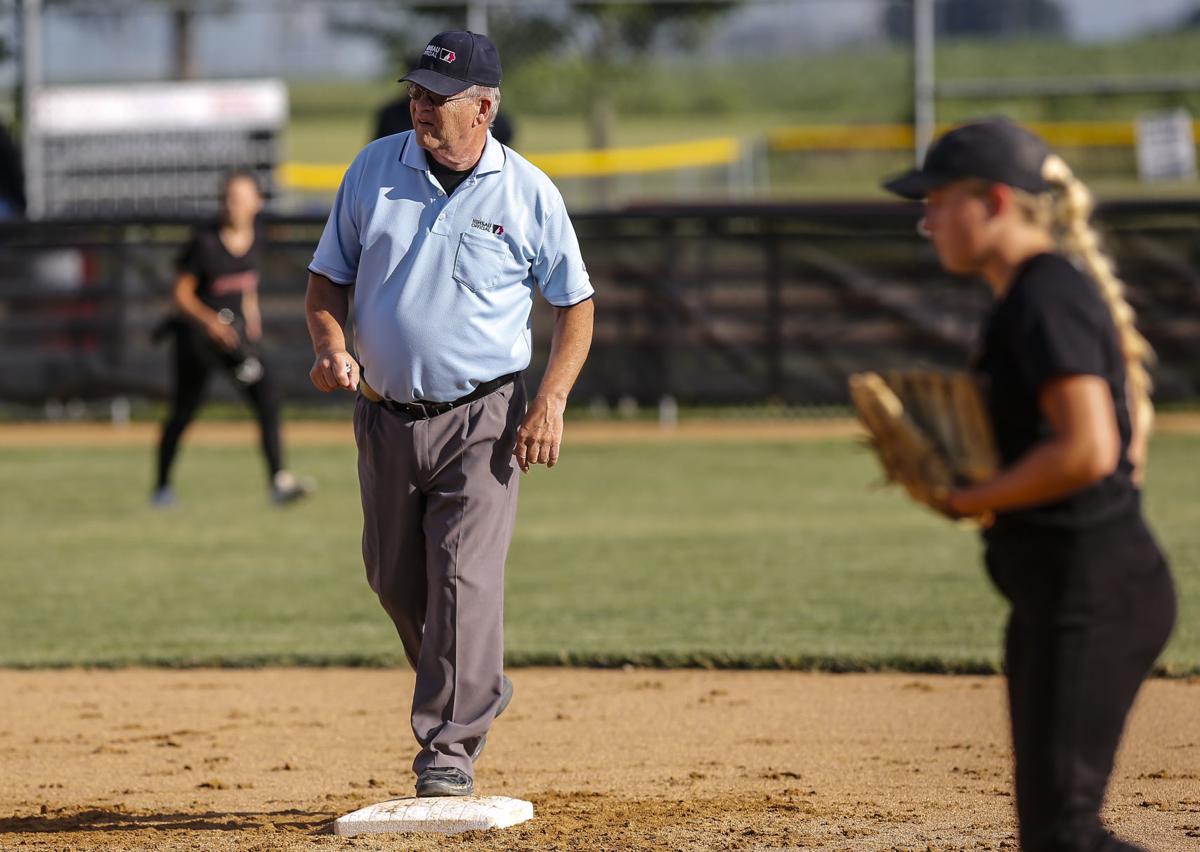 Jim Brackey stands atop second base during a June softball game between Garner-Hayfield-Ventura and Osage. 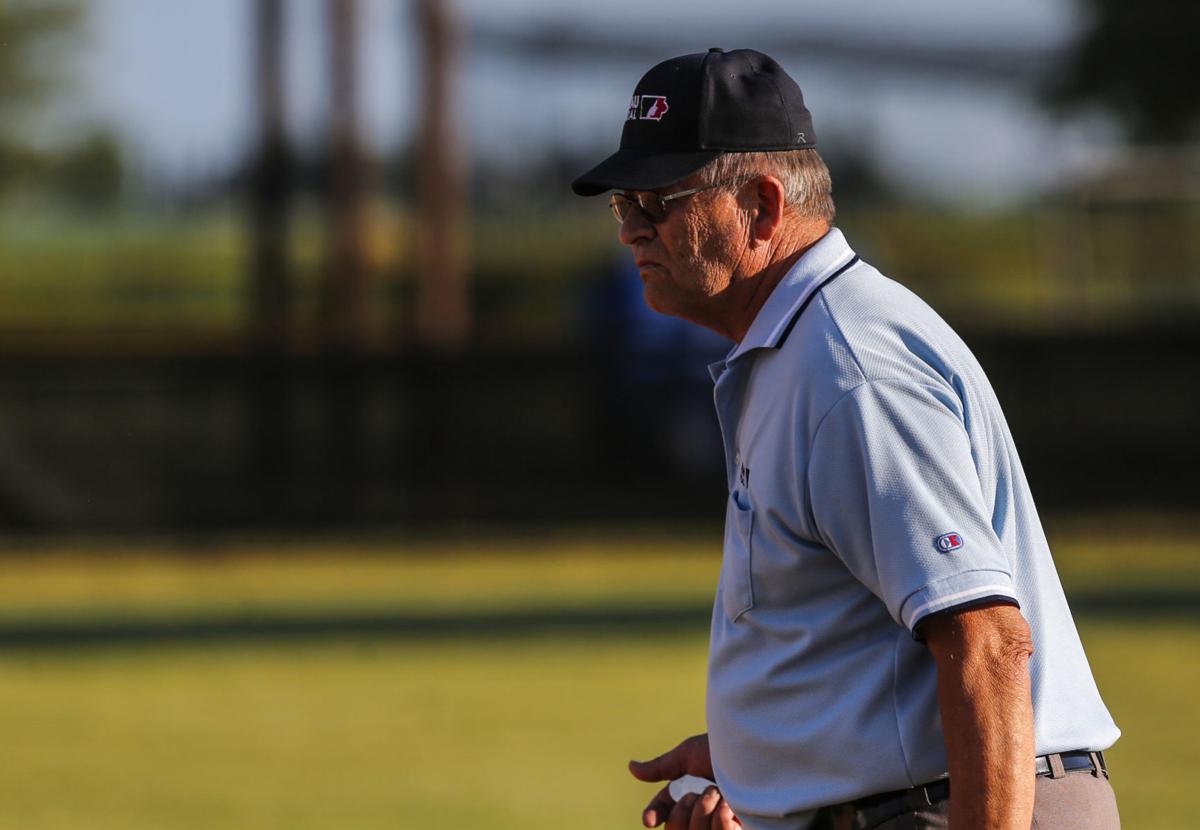 Jim Brackey of Thompson is in his 51st year as an Iowa official, and doesn't plan to stop anytime soon.

Fifty-one years is a long time to do anything, but for the Thompson man – who officiates softball, football and basketball – the time has zoomed by.

Brackey, now 73 years old, has had to cut back a bit on his schedule after suffering a ‘light stroke’ during a particularly hot game three years ago. After that event, he decided to focus on umpiring just softball in the summertime and football in the fall, while doing only junior high and JV level basketball games.

While he says he has lost a step or two, neither the health scare nor Brackey’s age seem to be slowing down his drive. After his stroke, Brackey didn’t take any time off.

“When I had my stroke, it was 104 degrees and I was doing a baseball game,” Brackey said.  “I had all that equipment on and in that heat, the doctor said I just got overheated. In all the years of officiating, I haven’t had any injuries. I’ve been pretty fortunate.

“I didn’t even realize I had it until I checked with my doctor, and he said ‘You probably had one.’ I just kept on working softball.”

Dave Meinders has been Brackey’s partner for over 20 years. The two have grown close as they have traversed the state, and frequently have dinner and family get-togethers. Meinders is only the second partner that Brackey has had in his half-century of officiating.

For the first couple of seasons, the two had to get used to each other. But since then, as Meinders described it, they can almost read each others' minds on the field.

"We worked at it the first year or two, but then we clicked right away," Meinders said. "We talk about situations in the truck going to the game, and then if something comes up, we talk about it. We never have any problems, we can just look at each other and know what to do."

Over the past two-plus decades, the two have seen and done a lot together, and witnessed many of the changes that have taken place in Iowa high school sports.

One of the biggest changes is the size of the officiating crews. There used to be only two basketball and three football officials working each game, compared to the three-man hoops and five-man gridiron squads working now.

“There is a lot better coverage of the field today than it was back in those days,” Brackey said. “Even though I did college ball for 20-something years,  basically until the past five years, we were two-man. It was pretty demanding and physical.”

The other big change that Brackey has noticed is the demanding attitudes of parents. While the players and coaches remain respectful and largely a pleasure to work with, Brackey says that it is tough to watch parents put so much pressure on their kids to succeed in sports.

“The coaches in all the years I’ve (refereed), 99 percent of them are tremendous,” Brackey said. “They try to do their best, but the schools and fans, the parents more than anybody, think they should all be All-Stars, and all should go to state. That ain’t going to happen, and I think that is driving the sport kind of crazy.”

This summer has been one of the most unique summer sports seasons in state history, with the ongoing COVID-19 pandemic affecting everything from the start of the season to how umpires, coaches, and players interact on the field.

Several softball umpires decided to not participate this year due to health concerns, but Meinders and Brackey decided to go ahead while taking the necessary precautions.

“We talked about it earlier before we got started, and we went about it the same way,” Meinders said. “We don’t shake hands anymore in softball. We don’t have a lot to do with the ball or the bat or the catchers mask. It’s just the little things we are having to do this summer.”

Brackey was recently awarded a plaque by the Iowa High School Athletic Association for his 50 years of work as an official. He doesn’t have any plans on stopping, and told the Lake Mills Graphic that he is ‘going for another 50.’ He loves his job, and the accolades that come with it are a nice bonus.

“I’ve been recognized at a lot of state tournaments and regional games,” Brackey said. “It’s an honor, every time. The years fly by, and I’ve had fun with two different partners. We’ve had a lot of good times together. Our goal is to go out and do the best job we can.”

Black Charles City baseball player taunted: 'You should have been George Floyd'

"They looked at me and said, 'You should have been George Floyd.' Then they started chanting 'Trump 2020.'"

Even in its losses, the Central Springs softball team never loses its confidence.

Umpiring a baseball or a softball game can be challenging in the best of circumstances. During COVID-19, those challenges are magnified.

"I would like to thank all of the people that have supported us and our staff during this difficult time."

The Mason City baseball team closed out the regular season in grand fashion on Senior Night at Roosevelt Field, as the Mohawks swept a double-…

Umpire Jim Brackey watches a play at a recent softball game between Garner-Hayfield-Ventura and Osage.

Jim Brackey stands atop second base during a June softball game between Garner-Hayfield-Ventura and Osage.

Jim Brackey of Thompson is in his 51st year as an Iowa official, and doesn't plan to stop anytime soon.