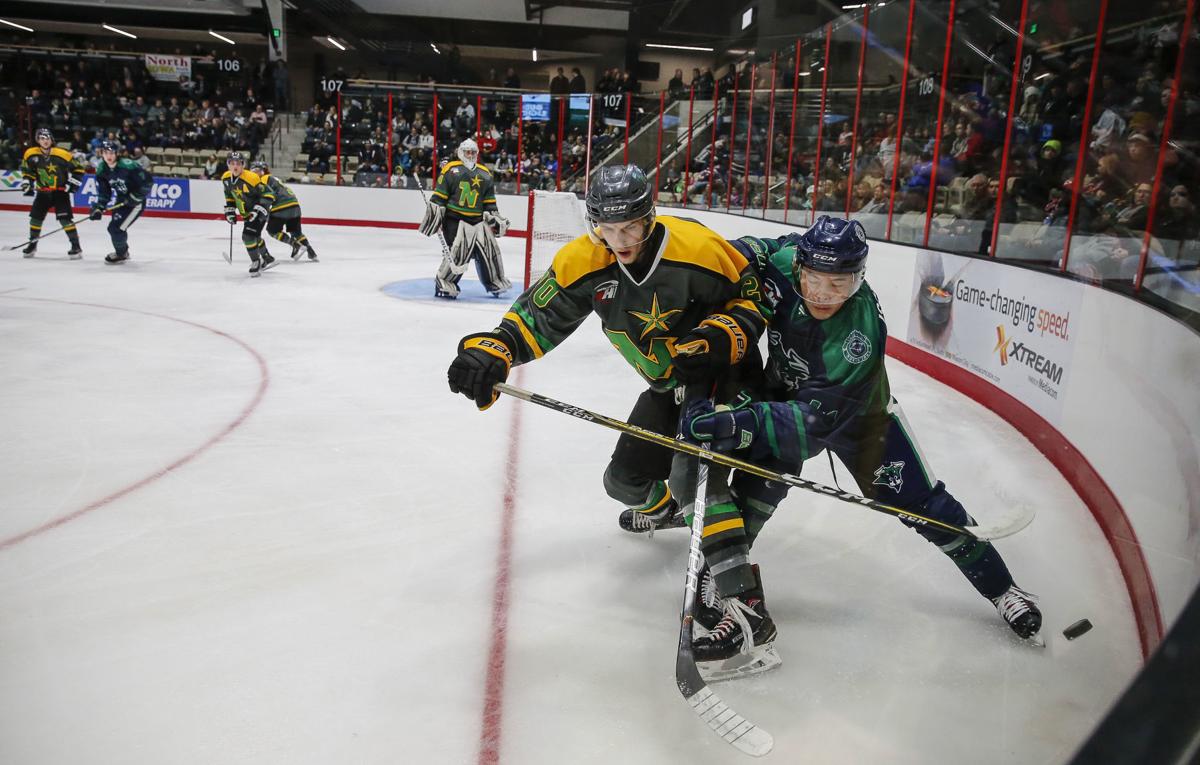 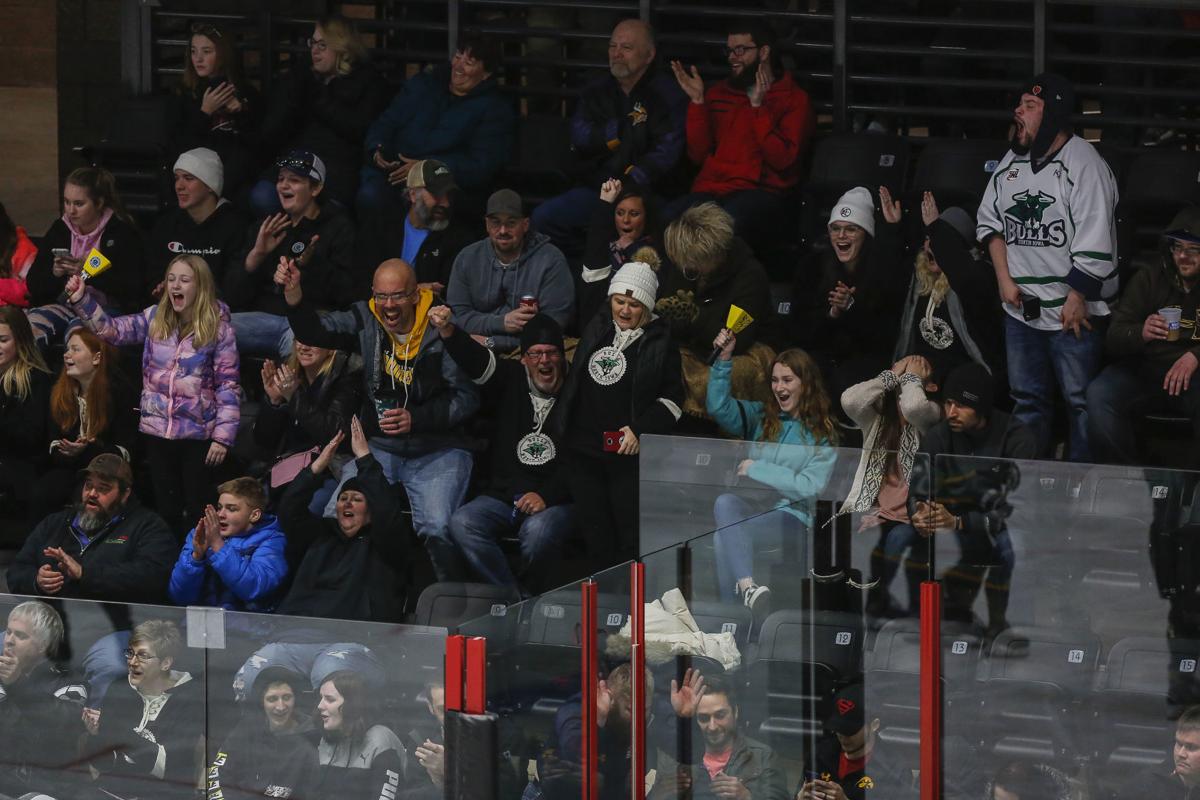 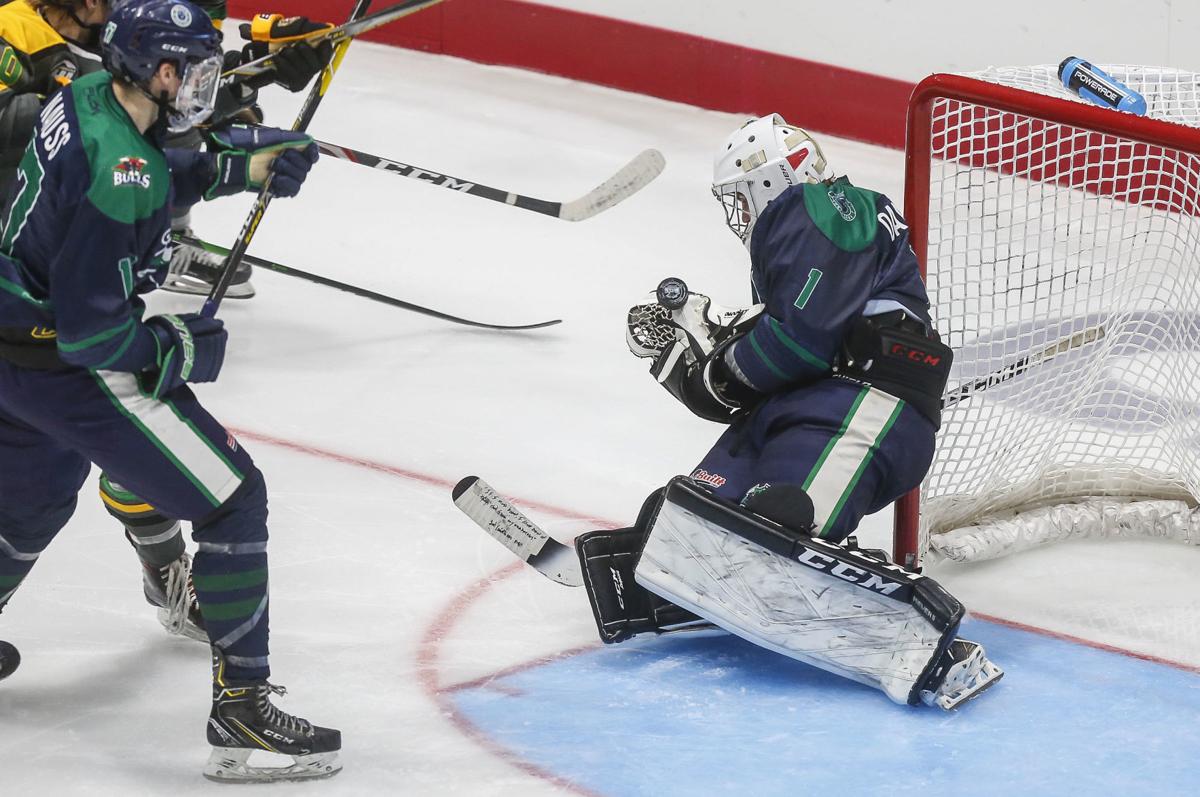 A long-awaited party finally went down on Friday night in downtown Mason City, as fans, players and city government officials all soaked in the atmosphere at the first hockey game at the Mason City multipurpose arena.

As the lights dimmed and the North Iowa Bulls players made their way onto the ice, a new era began with a bang. The Bulls thrashed visiting Breezy Point by a dominant 16-0 score.

Before the game, fans strolled into the new arena and looked around at the town’s sparkling new hockey palace. As the Southbridge Mall teemed with visitors, there was anticipation to begin a brand new chapter for area hockey.

For Mason City residents Jim and Ruth Smith, the new arena is a very exciting new addition to the town. Their first date 34 years ago was a North Iowa Huskies game at North Iowa Ice Arena. As Ruth recalled, Jim had free tickets and free beer, making for a pretty cheap date.

“I’m never going to live that down,” Jim said with a laugh.

The Smiths try to go to one or two hockey games per year, and after seeing the place for the first time, they were impressed with North Iowa hockey's new home.

“It felt like we were not in Mason City,” Ruth said. “It feels like we were in a much larger city, like Minneapolis or Des Moines.”

As the fans settled into their seats and the game began, things got even better. One minute and eight seconds into the game, Carter Wagner scored the first goal in the history of the new arena. The Bulls scored once more in the period and headed into the first break with a 2-0 lead.

“It’s nice to have it,” Wagner said of the historic first goal. “It’ll never be beaten, and it’s a cool thing to do. Everybody helped me out with that.”

25 seconds into the second, Harrison Stewart put one in to give the Bulls a 3-0 lead. Over the next 20 minutes, North Iowa scored five more goals and headed into the second break with an 8-0 lead.

As the third period began, the result was pretty much assured. The Bulls scored eight more times in the final frame, and as the North Stars goalie hung his head with every score, the Bulls players danced to the music playing over the loudspeakers and interacted with the enthusiastic crowd seated in the stands.

The Bulls most recent game in front of their fans, back on Dec. 7, was full of goodbyes to their old home at “The Barn.” But Friday’s game was full of new beginnings.

“It was a great atmosphere,” so co-captain Matt Dahlseide. “Obviously we have a lot of great memories at The Barn, but to be able to come here in front of all these fans and play the way we did is a great feeling.”

With the win, the Bulls improved to 5-0 against Breezy Points, and 24-4-2 on the season. In the team's first home game in nearly a month, and first game back after the holiday break, the victory was a good sign for a team with championship aspirations. Even head coach Todd Sanden was surprised at his team's level of play.

"I certainly didn’t expect this tonight either," Sanden said. "I thought we would be OK on the score side of it, but I didn’t expect 16 goals. We had a lot of plays that were amazing plays."

One concern that fans voiced before the move to the new home was whether the noise level would drop now that the team no longer plays in a small metal arena with a low ceiling. After the first game, that didn't seem to be a concern. Sanden said the crowd was just as loud as at the old place.

"At The Barn, it was goosebumps during starting lineup introductions," Sanden said "It was no different tonight. It was super loud out there again tonight."

For the players and fans, Friday's game will be be one for the books. The first goal, the first win, and for area hockey fans, the new home felt like a boost into the big-time.

"It flows a lot better, it feels like you are at a stadium, not just a set of bleachers set up in the fairgrounds," former Mason City and current Ames resident Alex Bernemann said.

Mason City native Justin Johanns summed it up best when he described his thoughts upon walking into the arena. After close to a decade of discussion, planning, and building, North Iowa hockey dreams finally came true.

A day before the North Iowa Bulls take the ice at their new home in the downtown Mason City multipurpose arena, workers were still putting the…

Bulls finish stint at The Barn with memorable win

On Saturday night, in the North Iowa Bulls final game at North Iowa Ice Arena, the fans and players had an experience none of them is likely t…

When you walked into the North Iowa Ice Arena, it was hard to miss all of the championship banners from various teams hanging from the rafters…

There have been a few constants in North Iowa life over the past several years. Cold winters, discussions about the River City Renaissance pro…