It's annual Spelling Bee Week in Google-land, and each year the search engine that rules the world posts a map of which words are the most searched "How do you spell ...?" in each state.

Can you guess Iowa's? Check out the map. 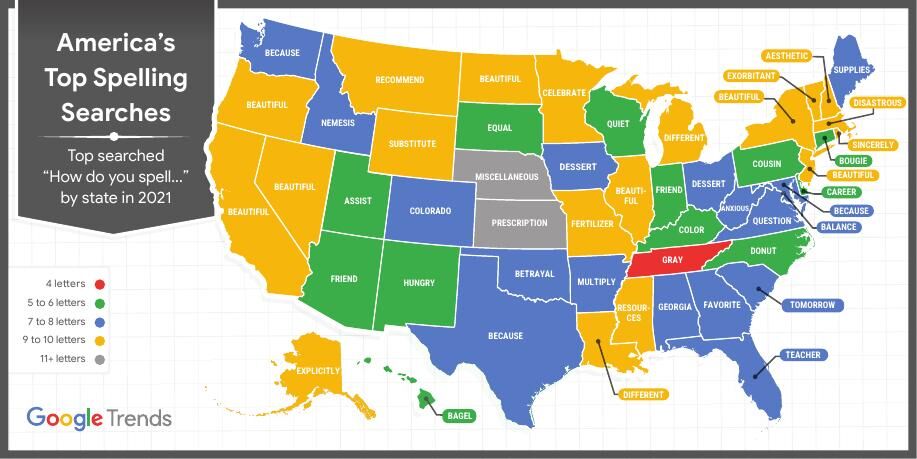 During the first six months of responding to the COVID-19 pandemic in North Iowa, CG Public Health Director Brian Hanft said that it wasn't uncommon for folks in his department to have 80-hour work weeks.

Read here about the public health director's other observation after more than a year in the pandemic trenches.

In its second year, the fundraiser at the North Iowa Events Center on Saturday, June 26 has a twofold purpose.

The first of course is to raise money for the North Iowa Fair itself, which gets going Aug. 5 and runs through Aug. 8.

"Still a free fair and we want to keep it that way," fundraiser organizer and Fair Board Member Lisa Canedo said.

According to her, the other purpose of the fundraiser, which is largely taking place in the "All-Seasons Building," is to keep it ever present in people's minds that there is a constant churn of events happening at the North Iowa Events Center all year long. The more aware people are of that, the likelier they are to come out and take stock of all the updates that have been made in the past year.

Gov. Kim Reynolds’ office said Thursday that 19 refugee children were flown to Des Moines and transported to sponsor families last month, despite her previous rejection of a federal request that immigrant children be housed in Iowa.

Reynolds, a Republican, and Democratic U.S. Rep. Cindy Axne both said the federal government withheld information on the flight despite repeated requests from their respective offices.

Reynolds’ office on Thursday said the federal government on multiple occasions denied the April 22 flight was part of a federal refugee settlement program, only to confirm on May 21 that it in fact was.

The Mason City Fire Department responded to the 900 block of South Tennessee Place late Wednesday night after a report of a house fire.

The fire was showing from the roof where the electrical service entered the building. Firefighters extinguished the fire quickly from the exterior of the building. Units returned to service just past midnight.

So maybe country music isn't your thing and you're planning on skipping the first-ever Country Thunder music festival in Forest City.

How about something a little quieter, like croquet? Now, you can rent a croquet set at Central Gardens and play on the lawn. For more information, email info@centralgardensnorthiowa.com.

The pedestrian was sent to the hospital to be treated for their injuries.

CLEAR LAKE -- Eighth grade students who participate in summer athletics are high school students as of the first day of practice, and as such …

A Mason City man was sent to the hospital late Saturday morning after being struck by a vehicle.

The news stops for no one: Longtime Globe Gazette building damaged in apparent fire

Seniors at Mason City High School received their diplomas, leaving their secondary education careers behind them during commencement on Sunday.

A man died Tuesday after getting stuck in a manure tank on Sievers Family Farm in Stockton, Iowa.