The hatch is on. Breaking free of their eggshell imprisonment, broods of newborn wood ducks are getting their first glimpse of the Iowa outdoors. Leaping from tree cavity nest sites, boisterous chains of fluffy ducklings are following mother ducks over hill and dale. The road trip concludes upon reaching the shallow wetlands where web-foot families find safe havens of food and cover.

For a female wood duck, the journey is a milestone event. Getting off a successful hatch is never an easy task. The saga began on the southern wintering grounds when the hen chose her mate from a competing gallery of colorful suitors. As the days grew longer, the duck became increasingly restless and soon began leading her mate northward, arriving in Iowa soon after ice out. Female wood ducks possess an overwhelming urge to return to the place of their birth, often homing to the same cavity where they were hatched. But because the male follows the hen to her natal area, a drake may end up hundreds of miles north, south, east, or west of his birthplace.

For newly arriving pairs, the first order of business is to find a safe location for the hen to deposit her clutch of 10 or 12 eggs. Once a site is selected and the clutch is complete, the female assumes sole responsibility for incubating the eggs until the ducklings emerge a month later.

For a female wood duck, nesting is a dangerous endeavor. Competition for natural cavities is keen; squirrels, starlings and others destroy many nests. Raccoons are an even bigger threat, blocking nest entrances and taking both eggs and hen. If first attempts fail, surviving hens are quick to renest – once, twice, even three times if necessary.

Back in the 1970s, Cerro Gordo County Conservation Board Director Ben Van Gundy and I had a couple of extra wood duck nest boxes that we installed at Mallard Marsh the first week of July. We didn’t expect the boxes to be used that late in the season but thought the installations would give us a head start on the next year’s nesting season. While sprucing up a number of already established nest boxes the following March, I decided to make sure the wood chip bedding in the two new boxes was still in good order. Much to my amazement, I discovered a complete clutch of hatched wood duck eggshells in one of the boxes. Even if a hen would have started laying eggs in the new box the same week it was installed, the ducklings wouldn’t have hatched until at least mid-August – nearly three months past peak nesting. That was one persistent hen.

Once ducklings begin breaking through their shells, it takes several hours for the entire clutch to hatch. Once all are emerged, mother and babies spend a night in their nest cavity before leaving the following morning. Exit strategies vary. Some hens fly directly to the ground and immediately encourage youngsters to follow. Other hens fly from the nest, disappear, and may not return for an hour or more. Although I can’t prove it, I think those mothers may be retracing the route over which she will lead the ducklings. Upon her return, the hen stands below the nest and softly calls to her young. Upon hearing her voice, the resting ducklings suddenly become noisily active and, like a kettle of popping corn, began simultaneously leaping upward toward the nest entrance. Upon reaching the opening, the babies leap into thin air without hesitation. Since many cavities are located thirty or more feet above the ground, a duckling’s first flight is a brave one.

Once the brood is reassembled, the hen begins leading them to whatever wetland she has chosen. Some journeys are short. Some may extend for a mile or more. While working for the Iowa Conservation Commission, I began a project that monitored wood duck nesting efforts in nest boxes installed on area marshlands as well as nests occurring in native woodlands. After web-tagging a woodland brood consisting of twelve, newborn ducklings; I decided to mark the hen as well. There were no wetlands in the immediate vicinity and, by marking the back of the duck’s crested head with a temporary paint, I hoped to discover where she would lead her brood.

When I checked the nest the next day, only eggshells remained. The hen and her brood were on the move. The morning after that, I was scoping a cattail marsh when I spotted a female wood duck swimming across an opening in the vegetation. Followed by train of 11 fuzzy ducklings, the hen had a painted crest. More than a mile from where I had marked her, the mother duck had only lost one of her 12 babies while completing the rigorous overland journey. The wood duck is an amazing bird!

Carney: New priorities will guide conservation for next 5 years

These goals will help us direct our efforts and our funding going forward.

Finding the biters is a big part of catching fish.

Hummingbirds are back in North Iowa

With the arrival of spring, hummingbirds are back in North Iowa. 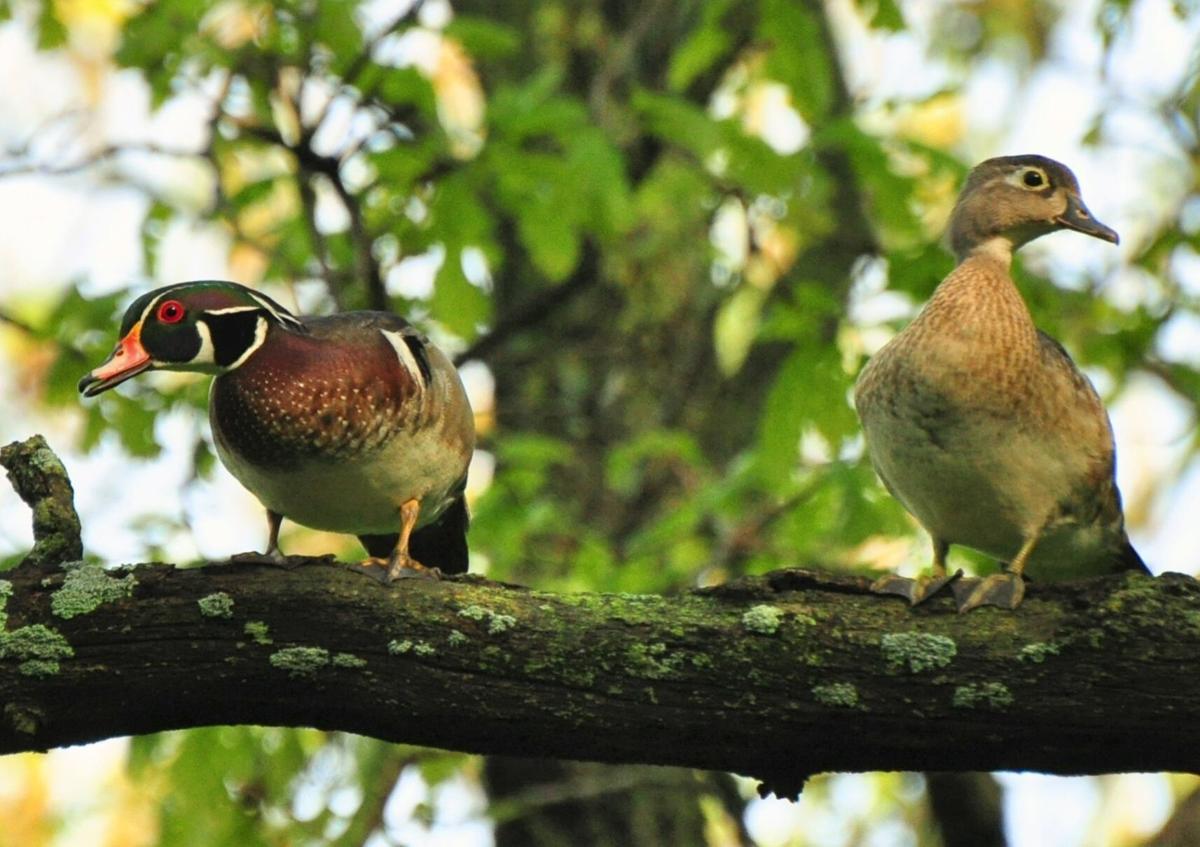 Finding a suitable nest site is the first order of business for returning pairs. 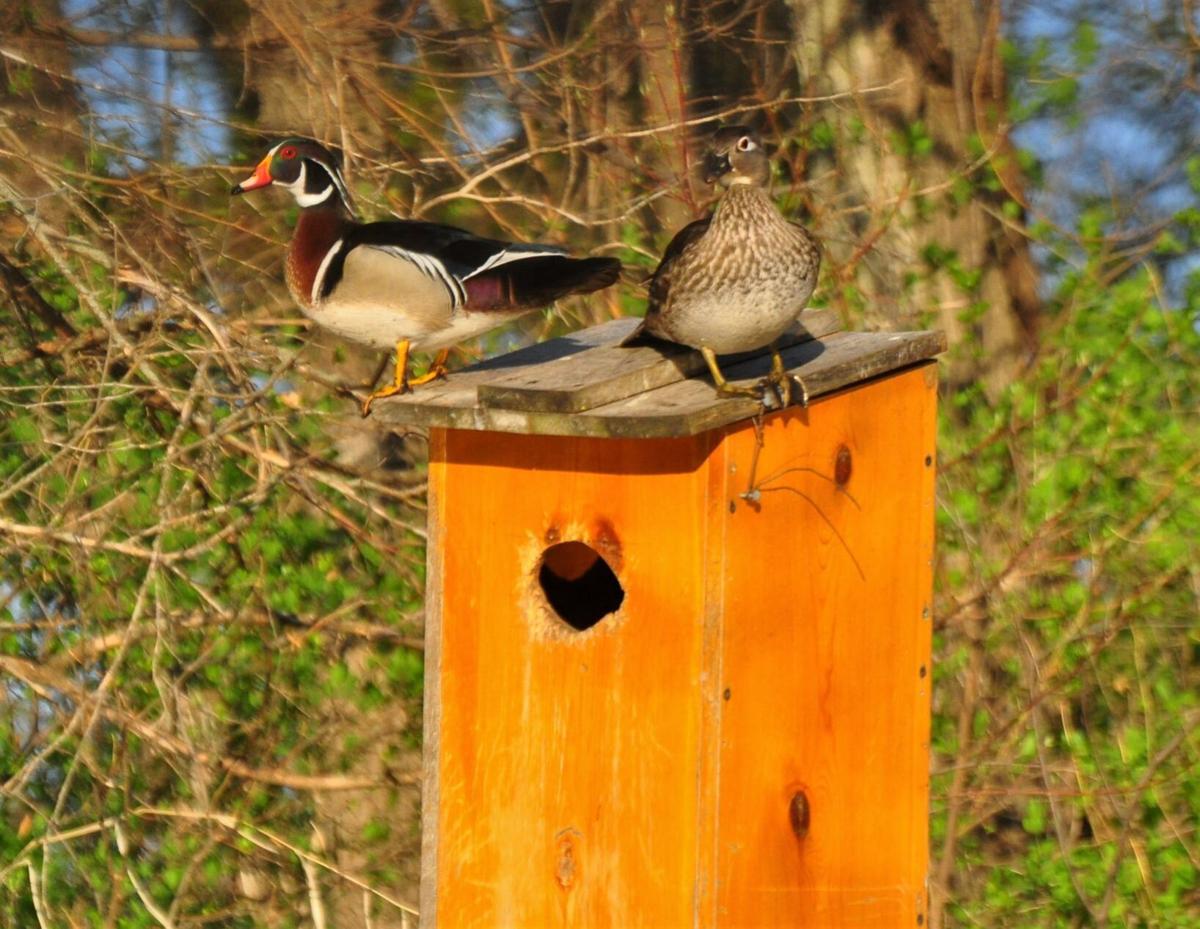 As is the case with many cavity nesting species, wood ducks readily adapt to wooden nest boxes. 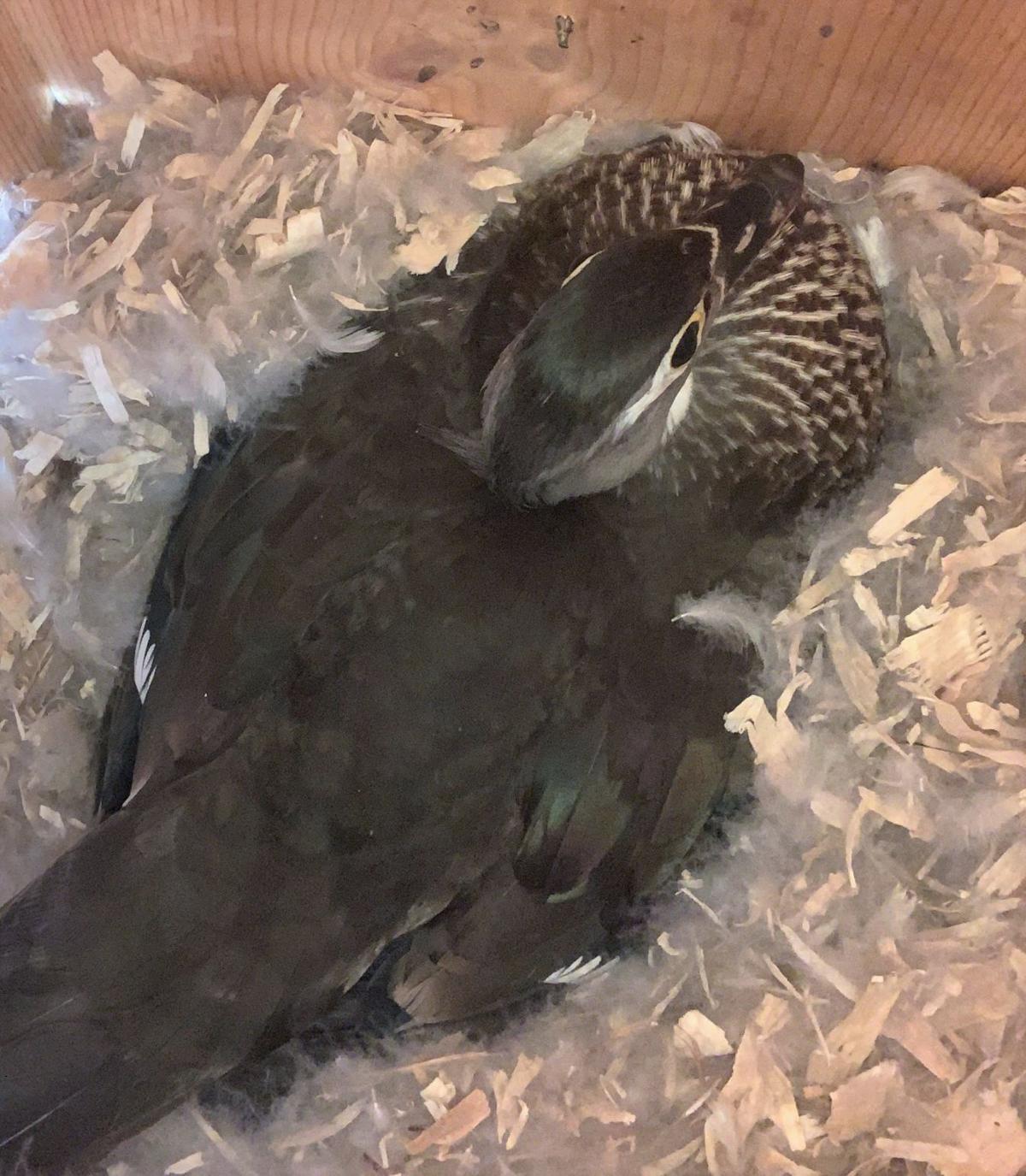 A hen wood duck incubates her eggs in a wooden nest box. 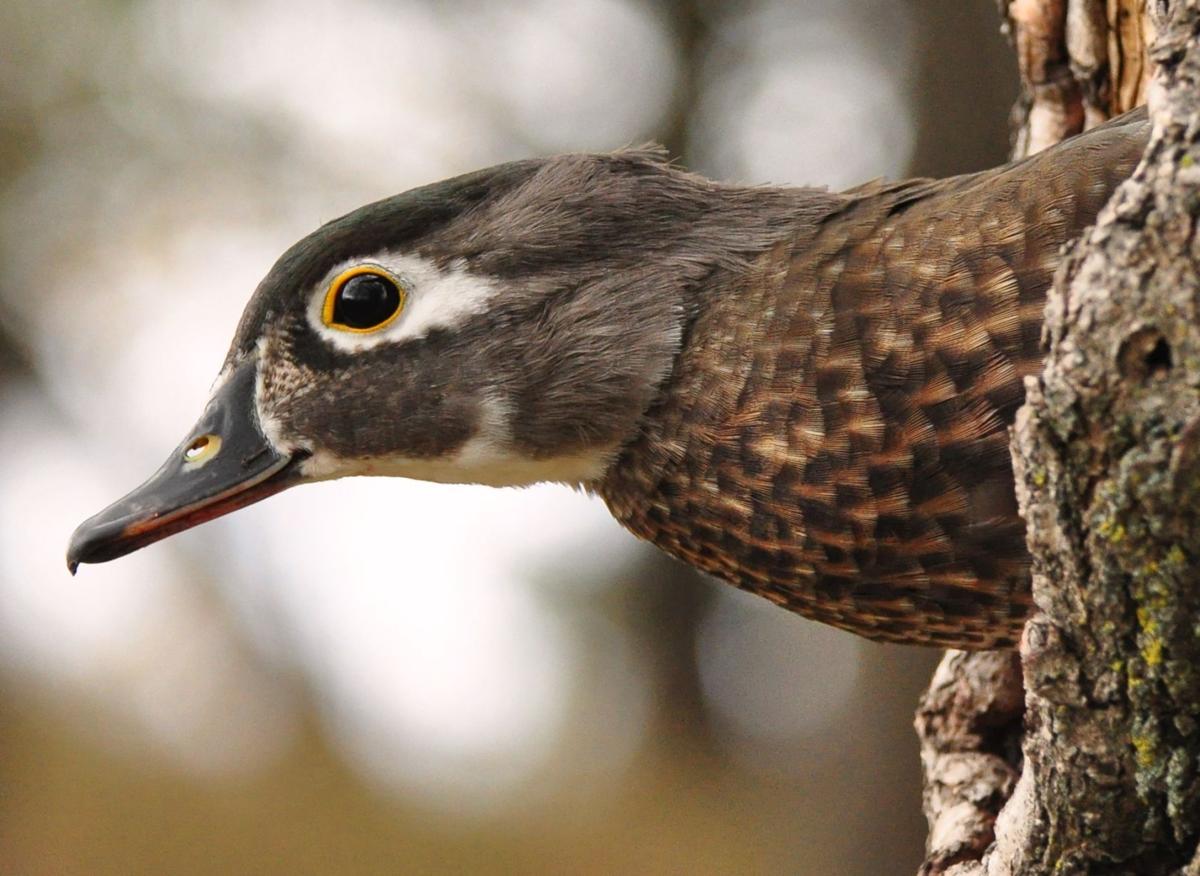 Before leading her brood from the nest site, hens may spend considerable time scanning for danger. 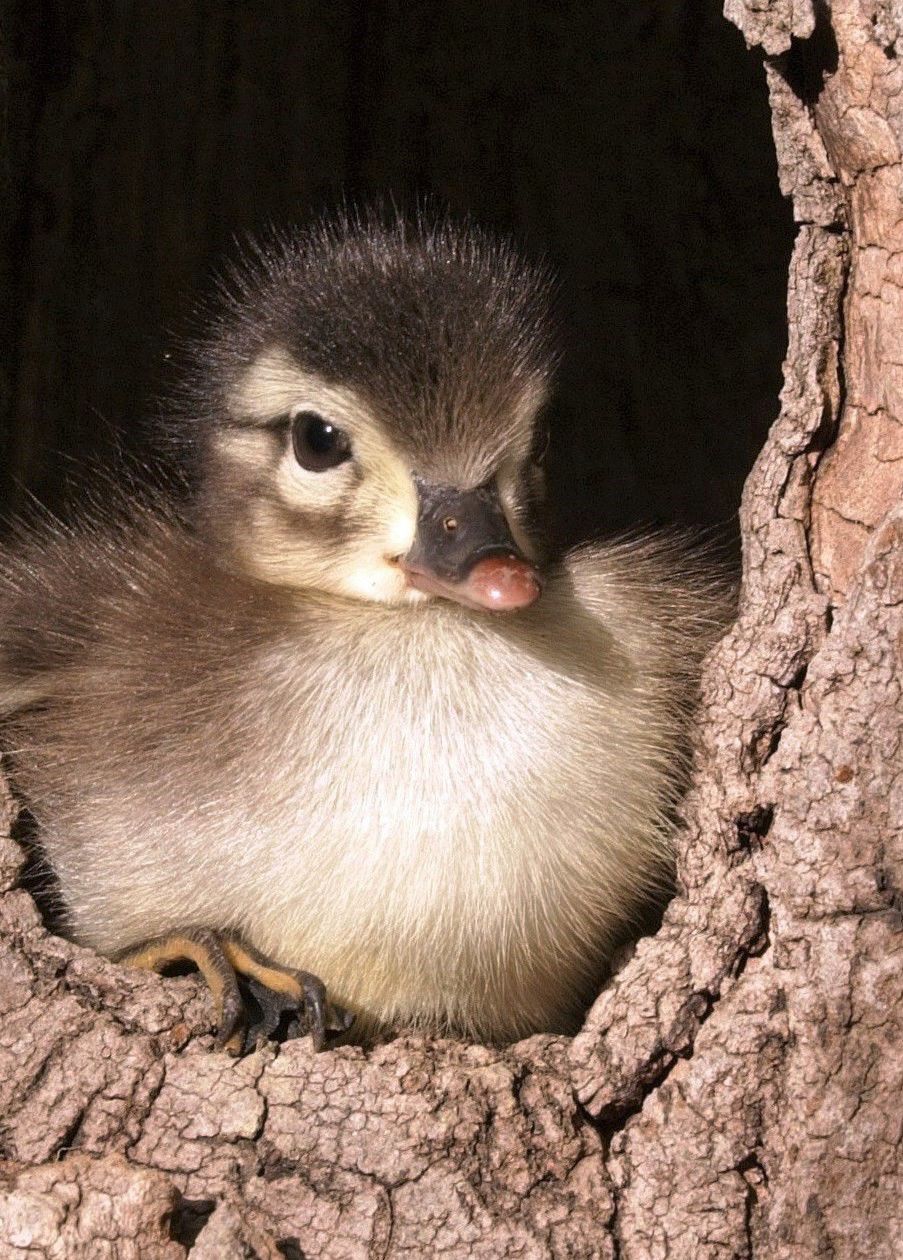 After spending a final night at the nest site, baby wood ducks do not hesitate to leap from the nest.