Here we go again. As predictable as lengthening days and summer heat, phone calls regarding “orphaned” wildlife are streaming in. Mysterious deliveries of baby birds fawns, and bunnies are appearing on the doorsteps of conservation offices statewide. Iowa’s baby bird and bunny season is officially underway.

It comes as no surprise. We’re currently in the season when wildlife of all kinds is busily replacing losses suffered during the long, cold winter. During the past several days, I’ve begun seeing a lot of wildlife babies. The list includes baby songbirds, baby rabbits, baby squirrels, and broods of mallard ducklings. For me, each new sighting is cause for celebration – a vivid reminder of the annual renewal of life.

The sightings also signal that it’s time for me to fire off this column. Doesn’t take much to put this one together. Filed under the heading “Wildlife Babies,” I’ve been blowing the dust off this same piece since the late 1970s.

“Why bother,” you might ask? “After all that time, isn’t it obvious that people are still stealing baby wildlife from their mothers?” The answer is that at least a few people will remember these words and take them to heart. I even hear from some of those folks from time to time. So, as I’ve already stated, here we go again.

From now until at least mid-summer, this year’s crop of wildlife babies will be leaving home to begin learning the skills critical to survival. Many of those babies will come into contact with humans. As a result, Iowa DNR and County Conservation Board offices across the state will be inundated with hundreds of phone calls and scores deliveries involving "orphaned or abandoned wildlife". Deliveries – many arriving anonymously -- will include everything from fawns and baby cottontails, to raccoons, ducklings and robins. Sometimes, the deliveries lean toward the exotic. I was once treated to the surprise arrival of a box full of “abandoned” skunk kittens – a feat that, I must admit, required the upmost dedication on the part of the person delivering the potently fragrant package.

So why do so many wildlife babies end up inside cardboard boxes or confined to a makeshift pen in the corner of the garage? The answer is simple. From fuzzy yellow ducklings to wide-eyed baby bunnies, nothing appears more cute and cuddly than a baby animal. Right or wrong, it's no mystery why humans feel compelled to come to their rescue. But in reality, the vast majority of wildlife babies that people encounter are not really orphaned at all. Nor are they abandoned. And while those folks who attempt to "save" these babies may have the of best intentions, they are in fact dooming the creatures they attempt to help.

Regardless of whether they’re wearing fur or feathers, the young of most wildlife species leave their nests or dens well in advance of being able to care for themselves. Although broods or litters may become widely scattered during this fledgling period, the developing adolescents remain under the direct care of their parents. White-tailed does, for example, leave their fawns hidden and temporarily unattended while foraging for themselves, but return every few hours to nurse their offspring. Unfortunately, this parental care is abruptly terminated when fawns [or other wildlife species] are discovered by humans.

Whenever a newborn fawn, infant cottontail, or den of baby raccoons is discovered, it is automatically assumed that the animals are orphaned. The youngsters’ fate becomes sealed as they are promptly scooped up and "rescued from the wild". Many babies perish soon after capture -- often from the overwhelming stress of being captured, handled, confined and force fed. Should an animal survive the initial trauma, it often succumbs more slowly to pneumonia, other diseases, or improper nutrition.

Whether they’re young or adult, wild birds and mammals have highly specific needs for survival. "Rescuing a baby from its mother" not only exhibits extreme ignorance -- it is also illegal. Having said that, there are occasions, of course, when an adult is killed, and her babies are indeed orphaned. In those cases, a state or county wildlife professional should be notified.

Observing wildlife – whether young or adults -- in their natural habitat is a moment to cherish. Sharing that experience with others or obtaining souvenir photos provides an even more lasting memory. But once you've done that, step back and walk away. Leave wildlife babies where they belong -- in the wild. As opportunities arise, I hope you’ll share this message with others. 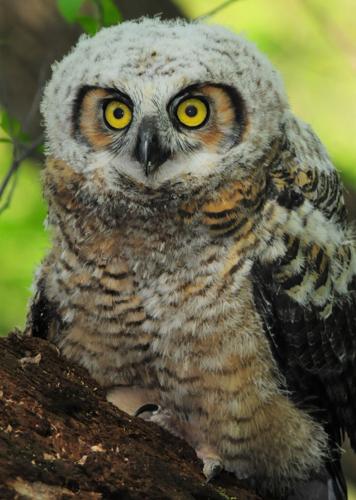 For fledgling great horned owls, learning to hunt is a long-term process. Youngsters [commonly referred to a reapers] typically remain in contact with their parents until at least early to mid-October. 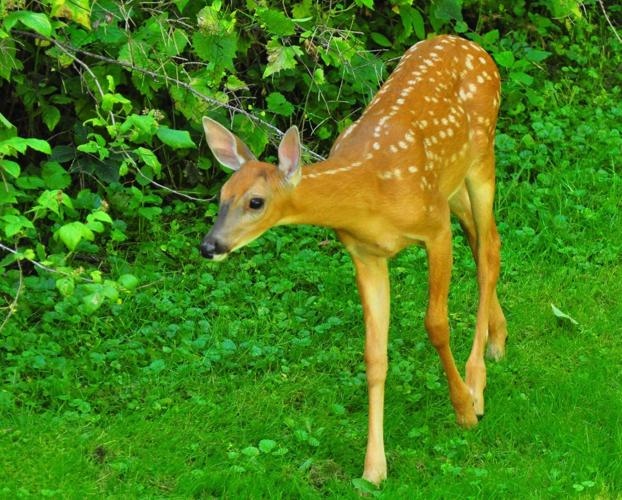 A white-tailed fawn explores a woodland edge. Although fawns are often left unattended during the day, the mothers make frequent visits to nurse their offspring.