All these have been offered up as possible culprits for a semi-regular, unexplained "boom" that's been heard by residents of Mason City for the past few years.

Some insist they only hear it in the southeast part of town, while others insist it's farther north.

Even the intensity of the boom isn't wholly agreed upon. Some of that could be explained by location. The farther away you are from something, the less intense it's going to sound, after all.

But there's a lot of metaphorical distance between someone messing around with something as explosive as tannerite and frost quakes, or cryoseisms, which can happen when ice in the ground expands too rapidly.

Uncertainty about the source(s)

Mason City Police Chief Jeff Brinkley said that there isn't even a consensus on the cause from the calls the department gets and what officers hear for themselves.

"In a couple of cases we have found that they have had a business or industrial cause, in one case we found one person who had made a homemade firework, and many of the rest we are unsure about," Brinkley relayed.

He added that the booms do appear to be sporadic: "There isn’t a pattern that we have been able to identify." Which is backed up by plotting locations mentioned in a North Iowa Rant & Rave comments thread on Facebook.

"We would like to have residents call when they have information that may help us identify the source of the noise or the area where it originated," Brinkley said.

Night time is the wrong time

"I hear them mostly in the evening, but they have happened in the middle of the night, which makes you sit straight up in bed," Mason City resident Lori Caspers shared.

Caspers said that she herself hasn't contacted any local officials about the matter but has heard rumblings about a homemade cannon being to blame. Though, in the same turn she mentions the possibility, Caspers somewhat dismisses it.

"If I was this person’s neighbor I would have turned them in a long time ago," she said.

Based on her own timeline, Caspers thinks it's been going on since last winter, which would lead credence to the ice boom theory. But she swears she's heard similar noises in the summertime as well and, as frigid as North Iowa can get, conditions for cryoseisms aren't quite right in mid-August.

Nicole Kesten, who lives on the Northeast side of 12th Street, has also heard "it" for about a year, and usually at night, like Caspers.

"One time it sounded like it was in my backyard and scared the living crap out of me! Woke up on a dead sleep!" Kesten remembered.

She's cycled through the ideas about what's causing such a headache. At first she just dismissed it as train cars hooking up. Then she, too, considered the cannon possibility. After the last incident, a firework.

"I honestly have no idea what it is, it’s just totally weird! [I'm] getting so used to the boom that, if it ever stops, I’d be [like]: Where’s the boom?" she joked.

In July of this year, Accuweather ran a story entitled "Mysterious 'skyquakes' continue across the world with few answers to their origins."

The story's author, Michael Kuhne, cited a figure that "more than 64 different incidents involving loud, unexplained booms worldwide" were reported in 2017, "according to a NY Post report."

Later in the piece, he reckoned that possible explanations for the booms included lightning from distant thunderstorms, large meteors entering the atmosphere, earthquakes, mining operations such as blasting and super-sonic aircraft. And there was a case in San Diego that was attributed to jets.

But the closest large military base to Mason City is Camp Dodge in Johnston. So that wouldn't explain larger, closer, booms.

The website "Mysterious Universe" "looked into" the matter in February and said that there was a "deafening silence" on the part of law enforcement bodies. And while the article stops short of X-Files type speculation, the author does suggest that "Someone out there knows something the public doesn’t."

To its credit, the article does also make mention of the "Baader-Meinhof phenomenon," or "recency illusion." Think of it like buying a car, and then starting to notice that make and model of car on the road a lot more because you now have a reason to look for it. That's the Badder-Meinhof phenomenon. The threshold for confirmation bias is low too so it doesn't take much for the effect to take hold.

And that may well be it then. It's to a point where residents have almost "trained" themselves to listen for "the boom." If it's aliens though, we'll at least know when they're here.

We asked readers to send us photos of their icicles, big, small or in-between. Do you have some big, beautiful or weird ice? Email your photo …

How will legal marijuana in Illinois affect Iowa campuses?

More than 10,000 of Iowa’s public university students this fall came from Illinois — making that state second only to Iowa in feeding the University of Iowa, Iowa State University and University of Northern Iowa enrollment pipelines.

The work follows in the wake of work on the 12th Street Northwest Bridge which finished in late 2018.

The booms are back in town... or maybe not

The mystery surrounding Mason City's notorious "booms" seems to have been solved, but the person accused of being the culprit could be off the hook. 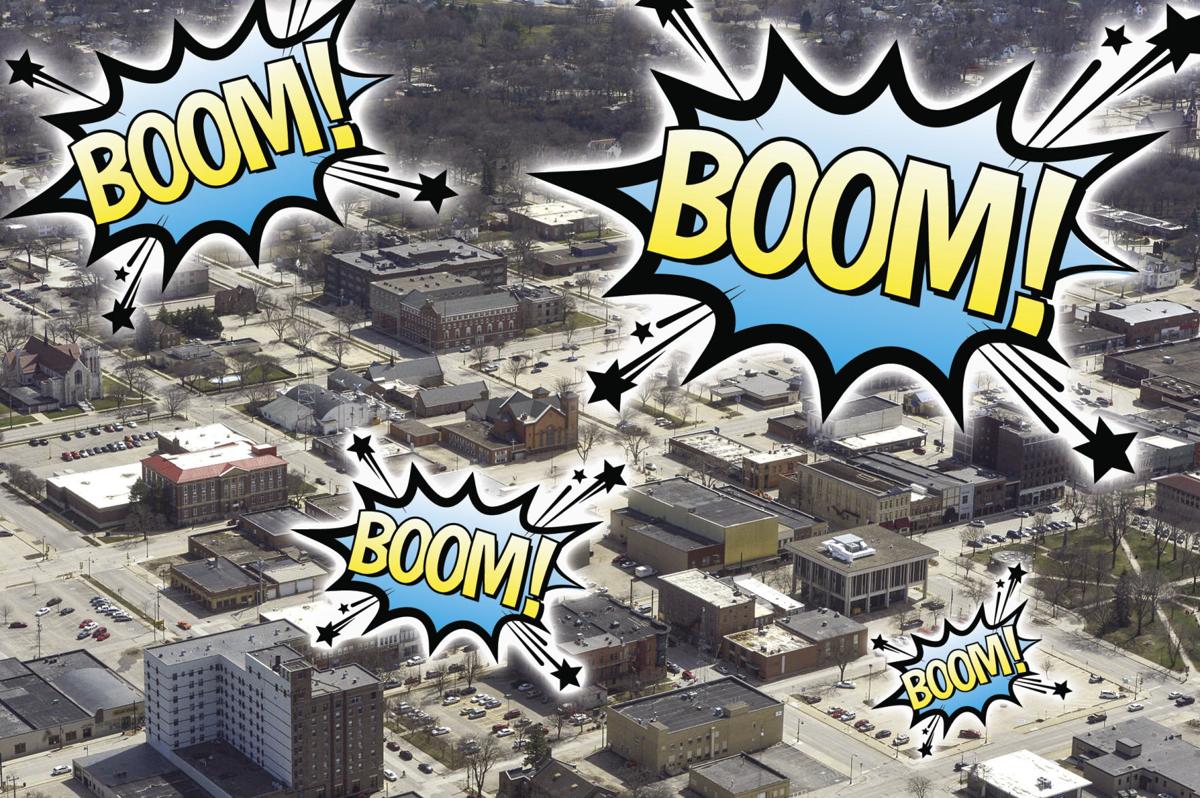 Map shows the most recent locations of booms heard and reported on local social media platforms.