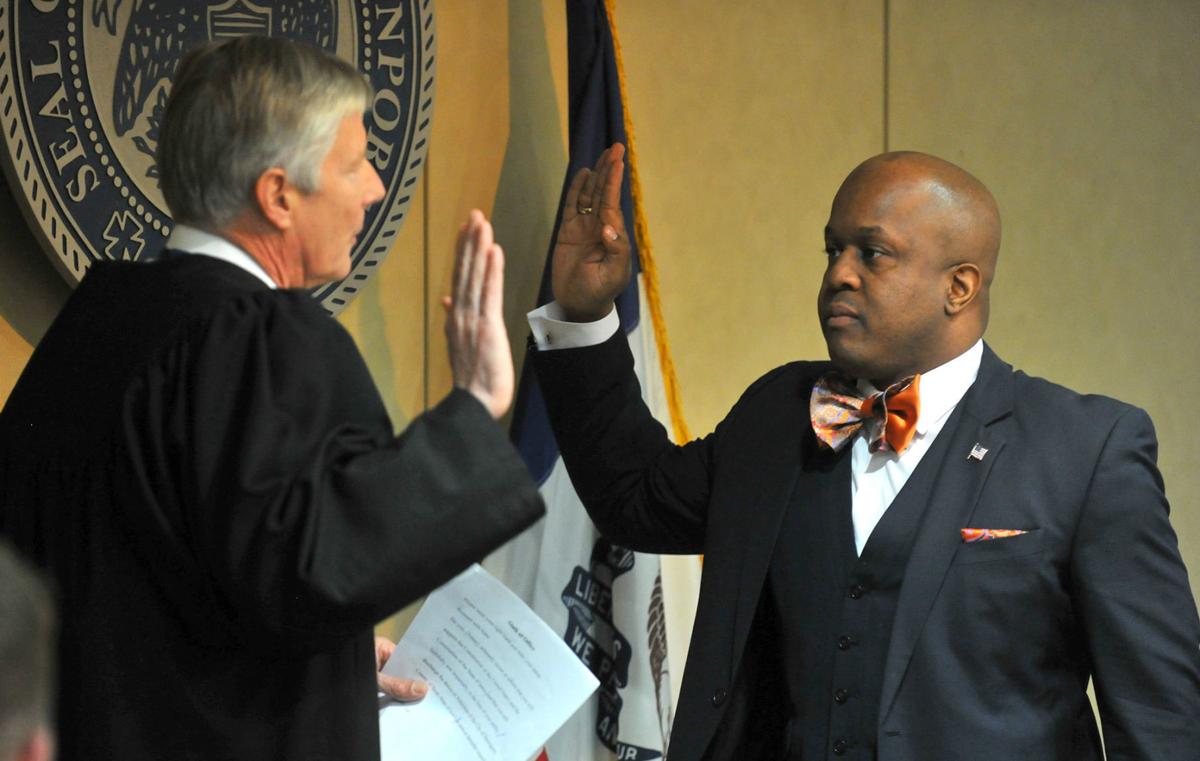 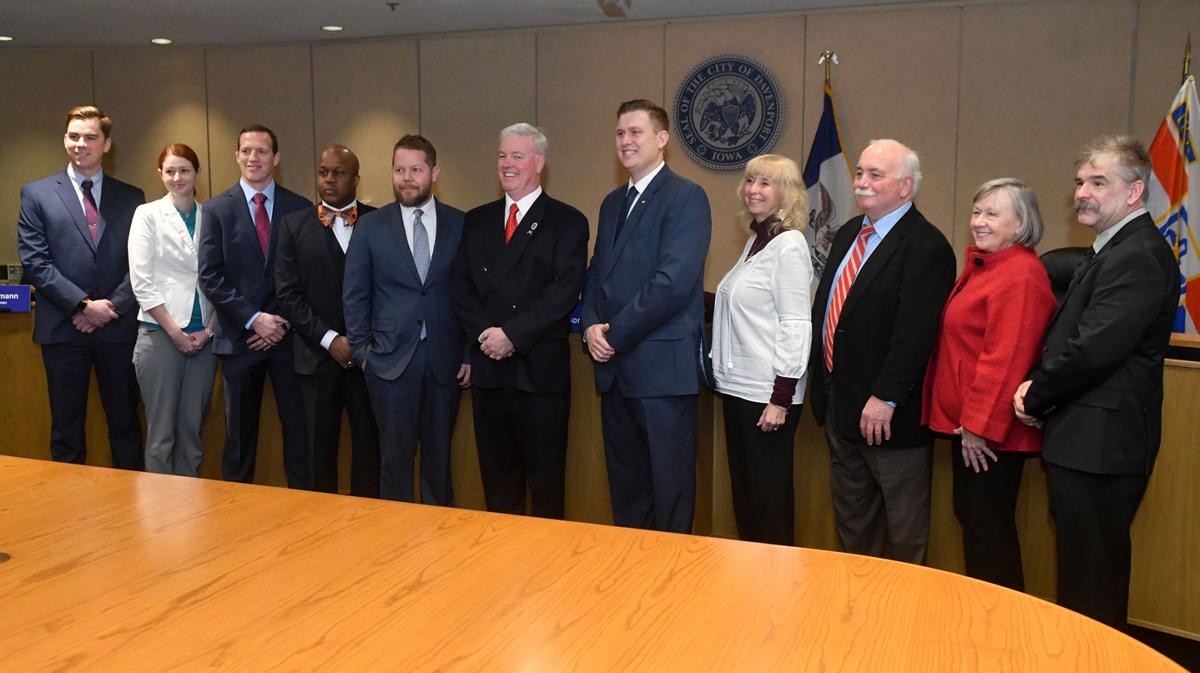 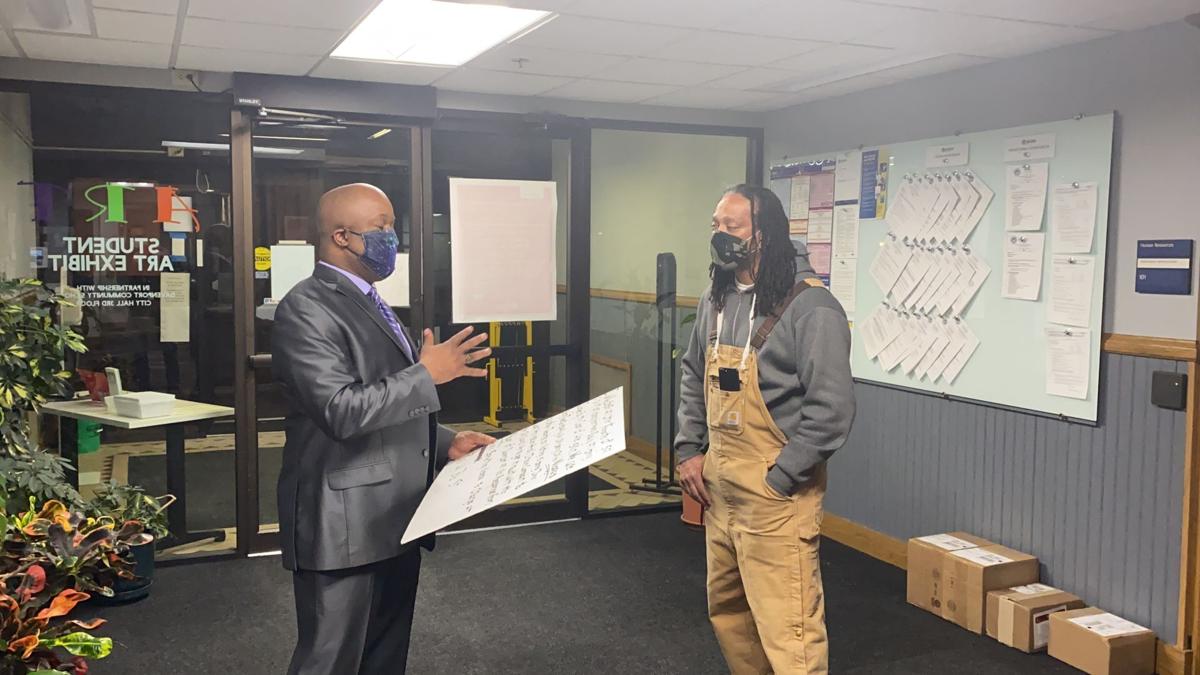 Davenport Alderman Patrick Peacock, Ward 7, (left) speaks to Davenport resident Willie Shorter (right) about his complaints of harassment and discrimination at The Heritage, a city-owned building that offers Section 8 rental-assistance following Davenport City Council's Committee of the Whole meeting Wednesday, Feb. 17, 2021. Peacock announced at the meeting that he will step down from City Council in April after serving just over a year in the role.

Alderman Patrick Peacock, Ward 7, on Thursday attempted to clarify comments made just hours before, after announcing his pending departure from the Davenport City Council, criticizing his colleagues and city staff for being "tone deaf" when it comes to addressing racial inequality and discrimination in the city.

Peacock announced Wednesday at Davenport City Council's Committee of the Whole meeting that he will step down from the position in April after serving just over a year in the role.

Peacock was elected to Davenport City Council in 2019 for the open 7th Ward seat to replace then-longtime Alderman Mike Matson, who was elected mayor.

Asked why he decided to step down, Peacock initially cited "a multitude" of "personal reasons," without elaborating. But while talking with a Black Davenport resident in the hallway following Wednesday's meeting, after the resident accused city officials of ignoring his complaints about mistreatment and harassment along with other residents of The Heritage, a city-owned building that offers Section 8 rental-assistance, Peacock said: "I'm not saying that's one of the reasons why I'm resigning, but (chuckles) this is one of the reasons. Because, we are tone deaf when it comes to people of color."

However, in a follow up email to the Quad-City Times and in a Facebook post Thursday morning, Peacock wrote: "My resignation is not solely because of the city council's lack of action when it comes to dealing with people of color or members of the other protected classes.

"I resigned because of personal reasons," Peacock wrote. "I am just charting myself a different path. ... It's with my deepest regrets that I will resign at the end of April due to some personal reasons."

Peacock continued: "To those who I helped and to those who I wanted to champion their causes, I am sorry I would not be here in the future to champion your causes. I will resign my seat knowing that I stayed true to my values and beliefs."

Peacock did not respond to a message Thursday with follow up questions.

Davenport City Council members on Thursday expressed their surprise, puzzlement and disappointment in Peacock's announced departure, and pushed backed on assertions of turning a deaf ear to issues of harassment and discrimination in the city.

Aldermen said their reluctance to add an investigator to help with a backlog of cases handled by the Davenport Civil Rights Commission had nothing to do with not supporting civil rights.

Some expressed concerns about the current effectiveness of the commission and how that would change with added staffing. Others said the issue remains unsettled, but were reticent to add staff in a year when every other department was told to hold the line on staffing because of the uncertain economic and financial situation caused by the ongoing COVID-19 pandemic.

Some, including Alderwoman Judith Lee, Ward 8, felt the commission had not provided adequate information to make its case for additional staff, which Davenport Civil Rights Commission Chairperson Ruby Batimana conceded.

"I don't blame the city council. I don't blame the mayor," Batimana said Thursday of their reluctance. "The Davenport Civil Rights Commission could have done a little bit more in presenting our case in that meeting. ... We could have done more, and we didn't," while expressing frustration at a lack of "big picture outlook" by city officials to combat discrimination.

The Davenport NAACP issued a statement Friday stating it "is committed to the elimination of racial isolation" and that "(w)e must hold all people accountable and stand ﬁrm in these values to eliminate racism and discrimination."

"Addressing the inequities in our own backyard are essential in the ﬁght against racial injustice; Davenport’s NAACP supports the avenue in which former Alderman Peacock is taking to address these elements and stands ready to assist," according to the statement.

Mayor Mike Matson said he and city staff "are committed to working with the Civil Rights Commission."

"I'm not going to go back and forth with him," Matson said Thursday of Peacock. "It's his decision to resign for personal reasons so I take him at his word that he needs to do that, and I wish him the best."

Matson, too, stressed that city officials have taken efforts to improve training and accountability within city government, including requiring and providing expanded implicit bias and cultural sensitivity training to all 150 city supervisors this fall.

Additionally, Matson said Davenport's city administrator and police chief meet twice a month with local representatives of the NAACP and League of United Latin American Citizens "to continue to discuss how we can do better."

The Davenport City Council is also scheduled to meet with the Davenport school board Monday to discuss findings and recommendations from a working group to look at issues related to the use of Davenport police officers who serve in the schools.

"I just don't agree that we're not doing anything," Matson said.

Matson, too, said he has talked to Willie Shorter, The Heritage resident who has complained about being harassed and mistreated in the city's public housing, and that city officials have looked into his complaints.

Matson said he encouraged Shorter to file a complaint with the city's Civil Rights Commission and Davenport Police Department.

"And I expressed to him if he has any evidence or video, or any of that, to please let us know," Matson said. "If there's evidence, then bring it. We're happy to take a look at that," adding city staff continue to monitor conditions and operations at The Heritage, "and we're discussing how can we improve that."

"I think the council absolutely considers those things and prioritizes those things and wants to be supportive in those initiatives," Gripp said. "And, a lot of times, it takes a long, concerted effort to get those things through. And I think that was a major source of frustration for him. But, I don't think that that means that we don't care or are tone deaf."

"Patrick Peacock has a wonderful opportunity to be on the Davenport City Council and address all those issues that are important to him," Ambrose said. "And there must be a very powerful reason for him to resign, and I just don't know what it is. Government doesn't move too fast. And to make the changes that we heard from him and other people on city council, it takes time.

"Where Pat goes, I wish him the best of luck," Ambrose said. "I respect Alderman Peacock and support him in a lot of these issues, but to throw up your hands out of frustration, I hope that's not why he's resigning. ... Pat and I didn't see eye to eye on some things, but I support him and I respected him for his efforts. I'm just disappointed now that he's decided he wasn't going to fulfill his mission."

If you build it, they will skate: LeClaire family builds rink of dreams

If you build it, they will skate.

An autopsy shows the death last month of a 21-year-old woman outside an Iowa State University sorority house was caused by acute alcohol intoxication and hypothermia, Ames police said Wednesday in a news release.

Changes to state unemployment benefits will be bad for Iowa workers and bad for Iowa, labor union members argued the morning after an Iowa  House committee approved modifications of the unemployment trust fund.

OTTUMWA, Iowa — An Iowa man who filled in wetlands along the Des Moines River in order to build a recreational vehicle campground has reached …

A Senate subcommittee on Thursday advanced a bill that would allow grocery and convenience stores to opt out of accepting empty beverage containers that are now covered by Iowa’s 1978 bottle-deposit law.

Bill seeks to restrict aspects of early voting in Iowa

DES MOINES -- By all accounts, Iowa’s 2020 general election was wildly successful, and that success was driven largely by early voting.

Grassley was asked during his weekly conference call with Iowa reporters about an Iowa elections bill that would shorten early voting, close polls earlier on Election Day and establish stricter standards for absentee ballots, among many other provisions.

Davenport Alderman Patrick Peacock, Ward 7, (left) speaks to Davenport resident Willie Shorter (right) about his complaints of harassment and discrimination at The Heritage, a city-owned building that offers Section 8 rental-assistance following Davenport City Council's Committee of the Whole meeting Wednesday, Feb. 17, 2021. Peacock announced at the meeting that he will step down from City Council in April after serving just over a year in the role. 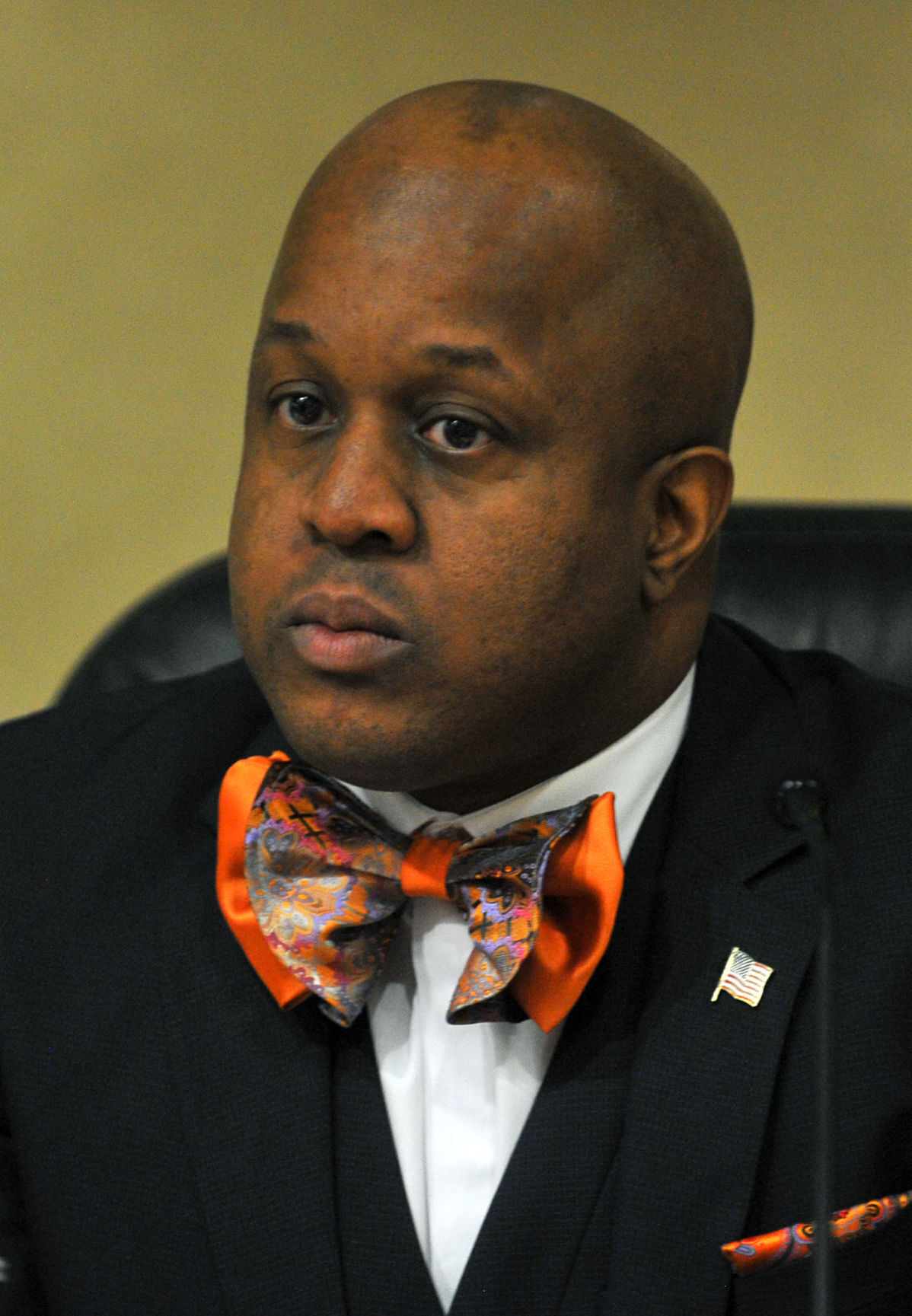