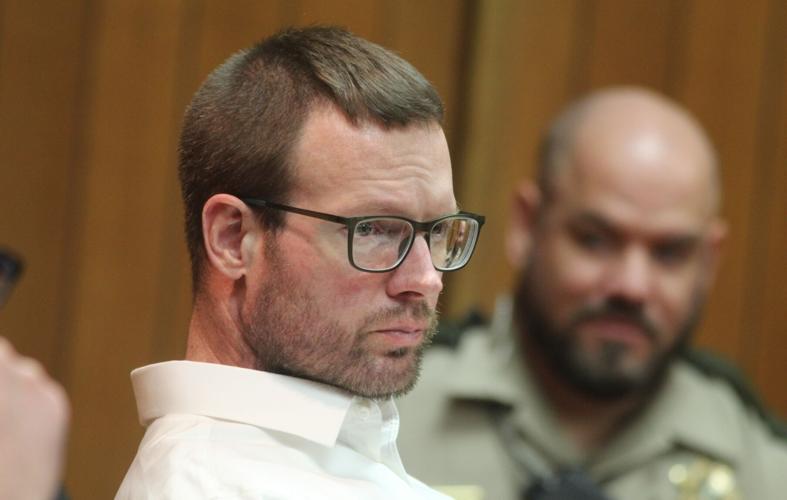 Michael Lang listens to testimony on Wednesday, May 11, 2022. 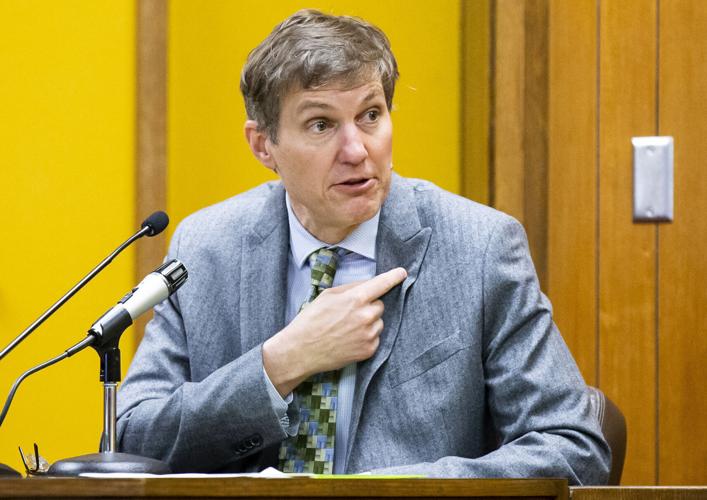 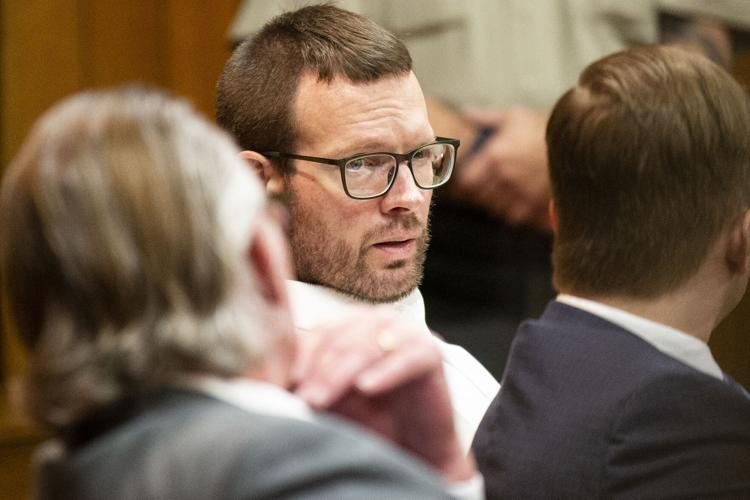 Michael Thomas Lang, center, speaks to his attorneys during Thursday's trial at the Hamilton County Courthouse in Webster City. 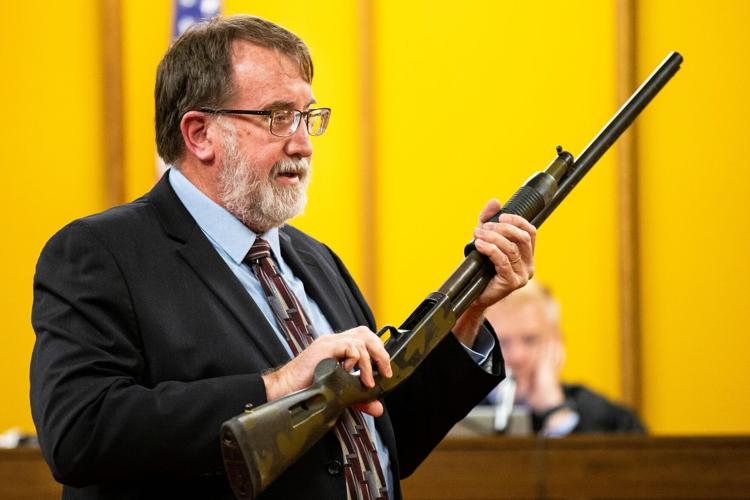 Michael Tate, a state firearm technician, holds a shotgun as he testifies Thursday during the trial of Michael Thomas Lang at the Hamilton County Courthouse in Webster City. 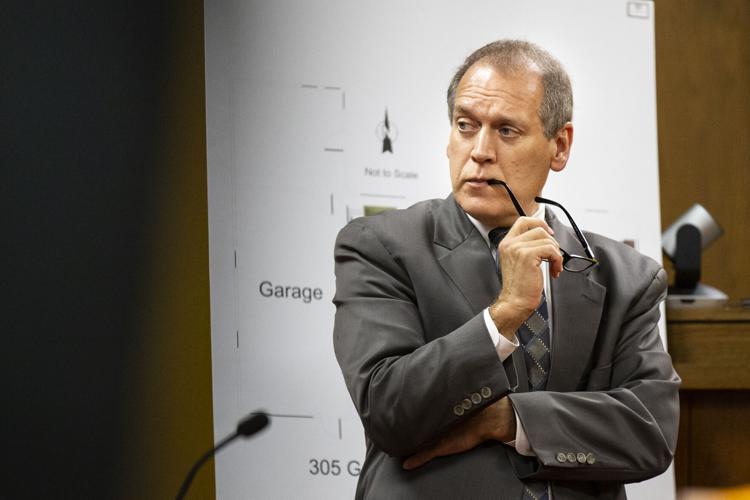 WEBSTER CITY -- Testimony has ended in the trial of the man accused of killing Sgt. Jim Smith in Grundy Center in 2021.

Closing arguments in the case will be Monday.

The defense indicated they weren’t calling any of their own witnesses, and the accused, 42-year-old Michael Thomas Lang, told the court he wasn’t going to testify.

Lang is charged with first-degree murder, attempted murder and assault on a peace officer. Authorities said he struggled with and choked a Grundy Center police officer following an attempted traffic stop and chase. He then fled home and shot Smith, a state trooper, with a shotgun when officers attempted to detain him.

Lang then fired the shotgun into the windshield of an armored vehicle when SWAT team members raided his house.

Judge Joel Dalrymple said that in his view, the actions of law enforcement during the incident were lawful, and the self-defense argument wasn’t available.

Also on Thursday, Assistant AG Douglas Hammerand renewed his request to place the trial on hold on Friday to allow members of Smith’s family to travel to Washington, DC, for a Police Memorial Week ceremony Friday night and a local event over the weekend.

Hawbaker resisted, saying the defense is prepared to argue closings on Friday, and any delay would increase the risk of jurors being inadvertently exposed to publicity surrounding the case.

The judge didn’t grant the motion, but gave jurors the rest of Thursday and Friday off to allow for both sides to review and argument jury instructions. He noted that many cases that are overturned on appeal because of errors in jury instructions, and he didn’t want to speed through the process.

Smith was wearing body armor, but the projectile hit his left shoulder around the armor’s shoulder strap and continued moving inward, entering around the collar bone and hitting a rib and his left lung, Klein said.

From there, the slug tore his aorta and hit is right lung. Klein found fragments of the slug around Smith’s right shoulder blade.

Klein also described a shotgun wound to Smith’s left leg. He said it entered his the back of his thigh and exited the front. He said that wound, also, could have been fatal on its own.

Tate said he couldn’t conclude the weapon fired the spent shells because the gun’s breach face was dirty and therefor didn’t leave markings on the shells. He ran a secondary test, looking at marks from the gun’s extractor and a catch in the magazine tube. From that, he was able to conclude the spent shells had been cycled by the shotgun.

According to the Iowa State Patrol, Michael McGee struck the girl, who was in a crosswalk at an intersection. An accident report said McGee, who was off duty, left the scene and was charged after he and his pickup were identified.

The new witness tampering charge comes from a witness who reported seeing a boy exiting the counselor's house through a window. The witness also claims the suspect handed him two personal items before the subject left the area.

The Iowa Legislature has approved and sent to the governor major changes to the state’s 44-year-old “bottle bill” program meant to encourage recycling of beverage containers.

An Iowa dog breeder who admitted killing some of his unwanted dogs with stomach injections and then leaving them alone in their cages to die is among the Iowans listed in the Humane Society of the United States’ annual list of the nation’s 100 worst dog breeders.

The U.S. Attorney's Office for Iowa’s Northern District filed a count of wire fraud nearly a year after the DCI began an investigation into missing funds.

One person dead after police standoff in Cedar Rapids

The police standoff lasted five hours, and after it was resolved, one person was found dead in the residence.

One of the teens had been staying consistently with the man at his apartment and told police they were in a relationship and trying to get pregnant. She also told police Nathaniel Whitfield had supplied her with marijuana.

3 seriously injured after SUV drives on I-74 bike path

Police say three people suffered life-threatening injuries after an SUV drove onto the I-74 bridge pedestrian/bike path between Moline and Bettendorf.

The incumbent publicly stated his opposition to Reynolds’ proposed legislation that would create taxpayer-funded scholarships for private school tuition assistance.

Schumer's plea to GOP: Be in 'shoes of these parents'

Schumer's plea to GOP: Be in 'shoes of these parents'

Michael Lang listens to testimony on Wednesday, May 11, 2022.

Michael Thomas Lang, center, speaks to his attorneys during Thursday's trial at the Hamilton County Courthouse in Webster City.

Michael Tate, a state firearm technician, holds a shotgun as he testifies Thursday during the trial of Michael Thomas Lang at the Hamilton County Courthouse in Webster City.