Become a Member
Read Today's E-edition
Share This
Meet a pair of Homecoming Queens from the Quad-Cities. They're both on the honor roll. Plan to study science in college. And are living with cancer.
0 comments
Share this 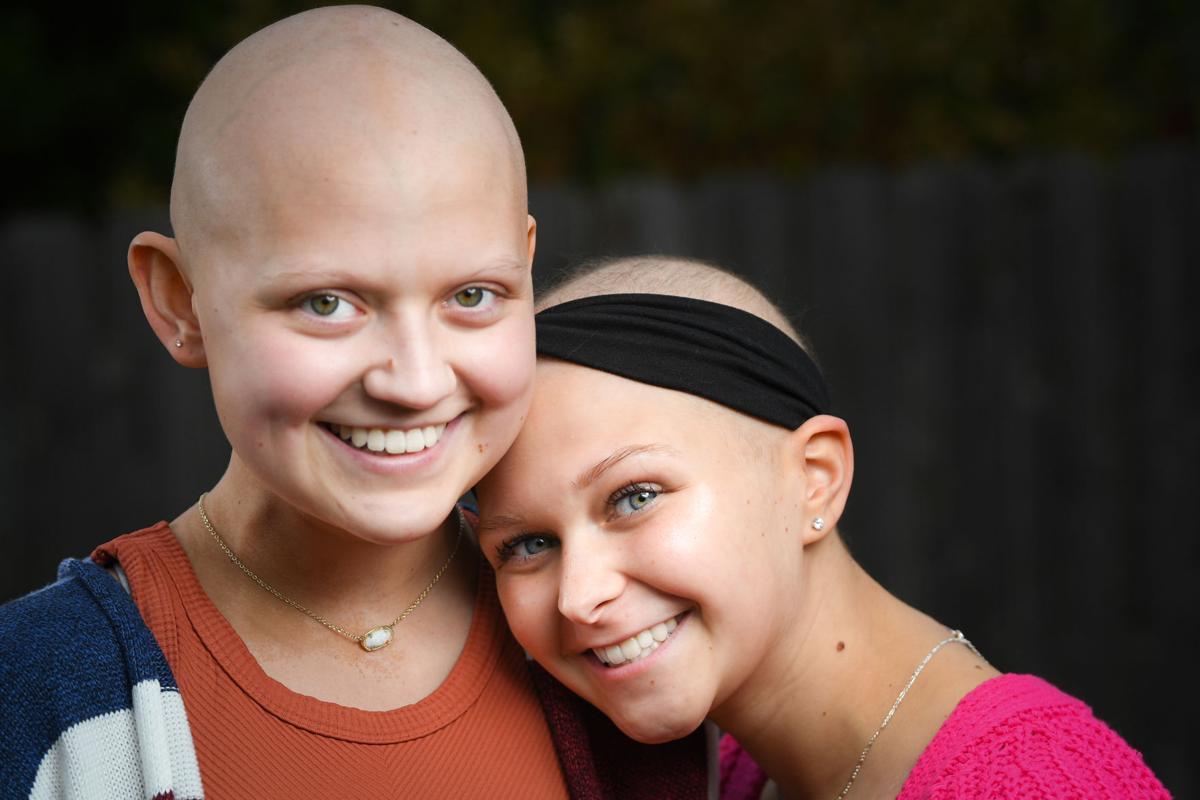 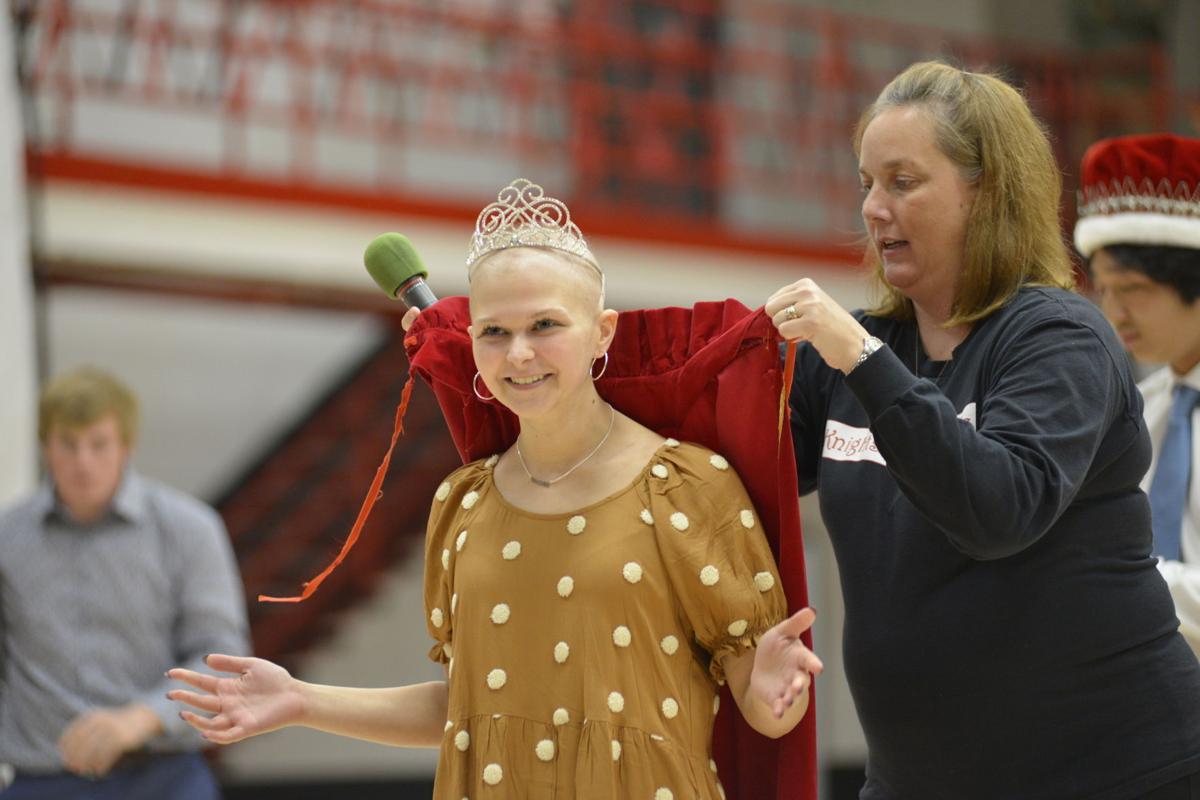 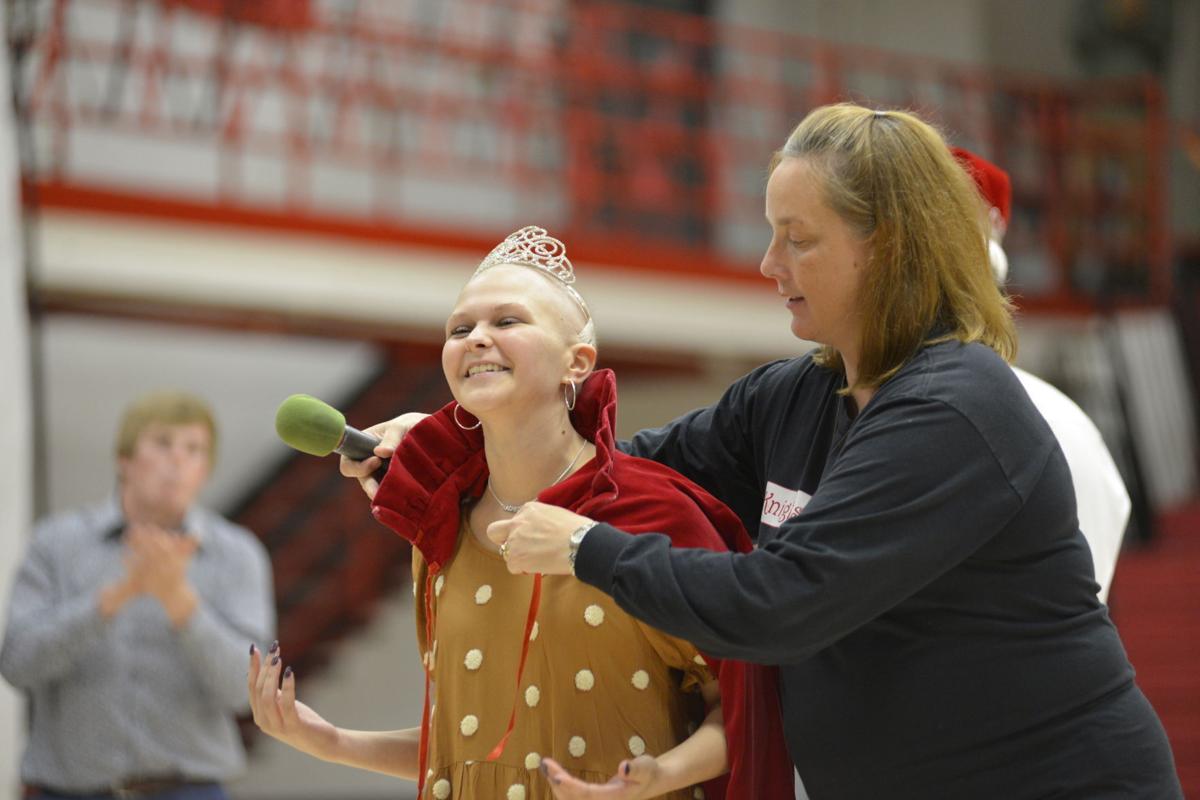 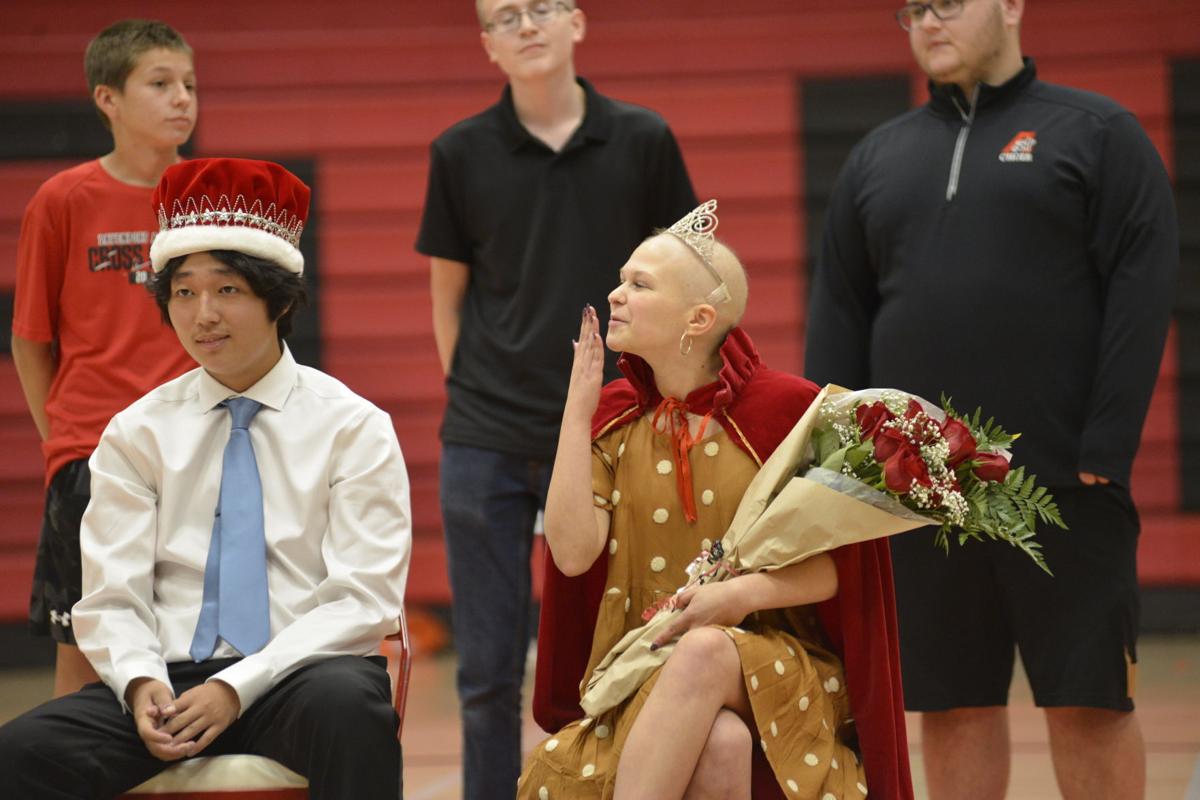 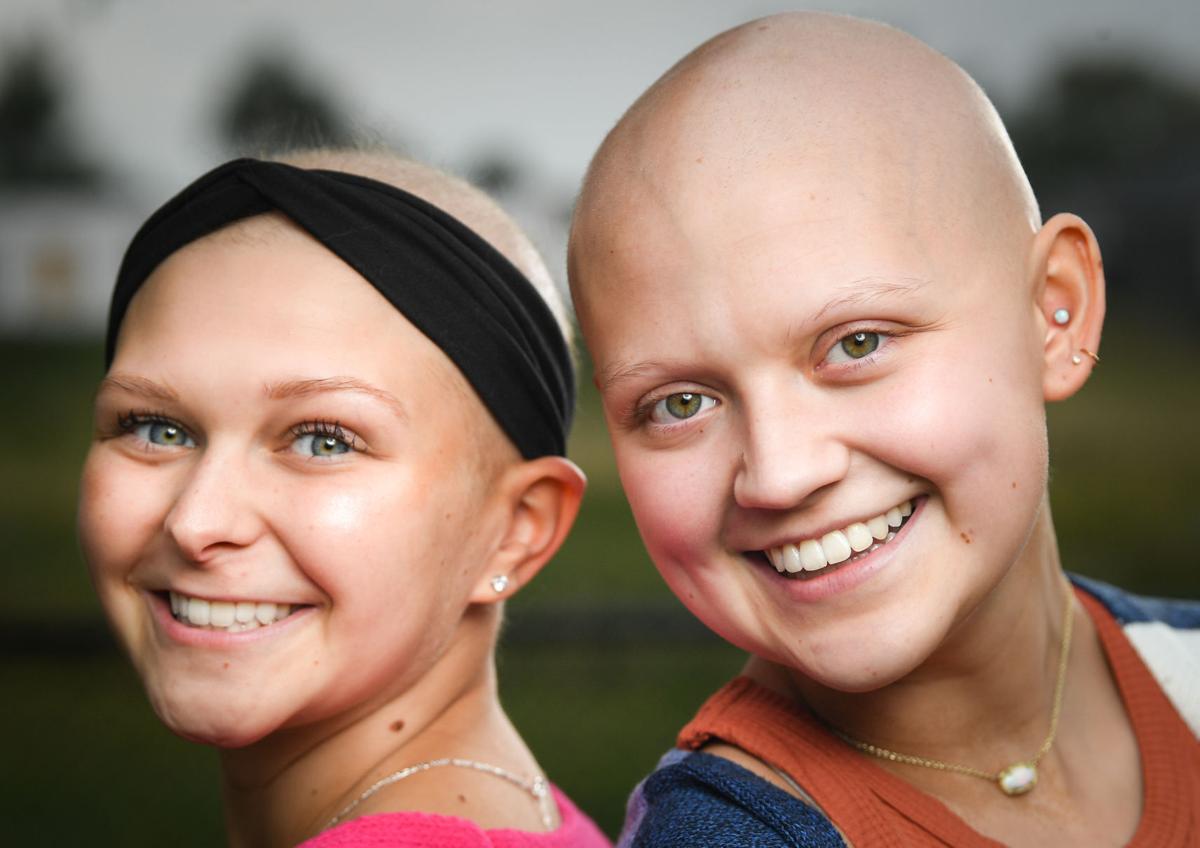 Assumption Homecoming Queen Rachel Schneider, 17, and Bettendorf’s queen, Charly Erpelding, 17, pose for a portrait at Rachel’s home in Davenport. Both teens are currently being treated for cancer. Their parents are Tara and Andy Erpelding and Nicole and Caine Schneider. 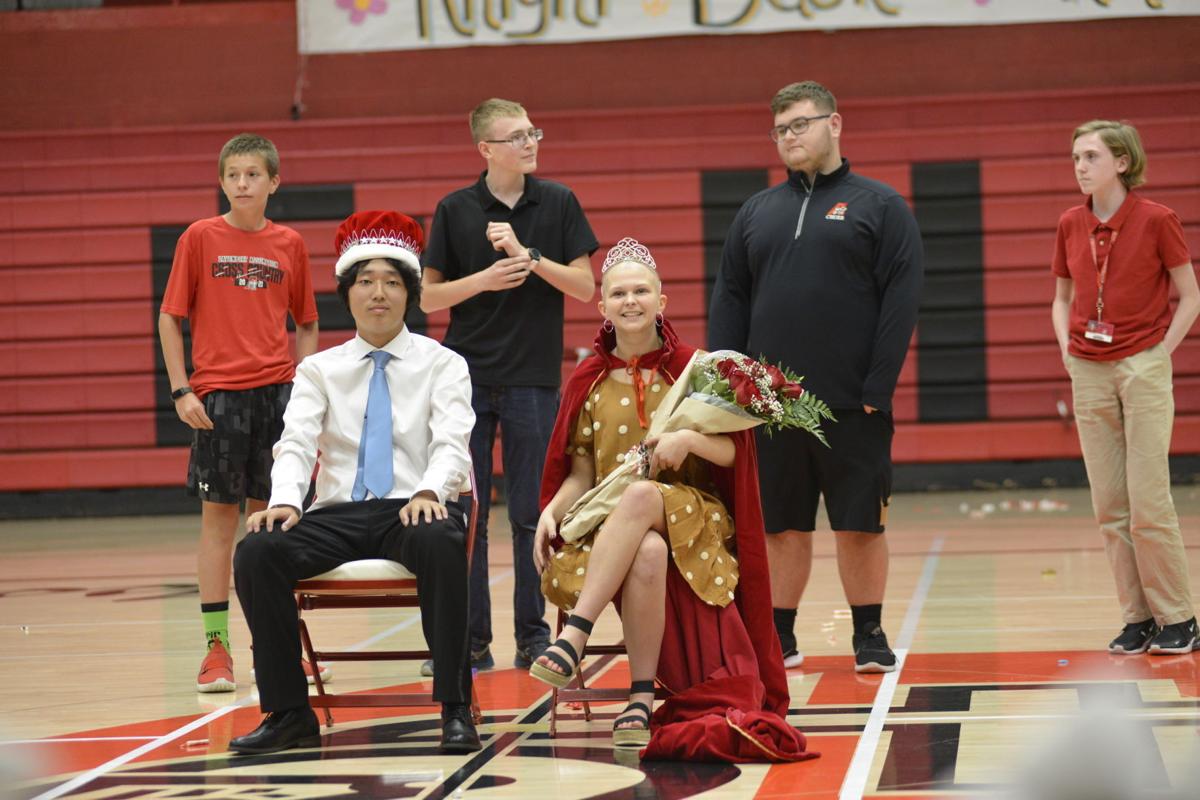 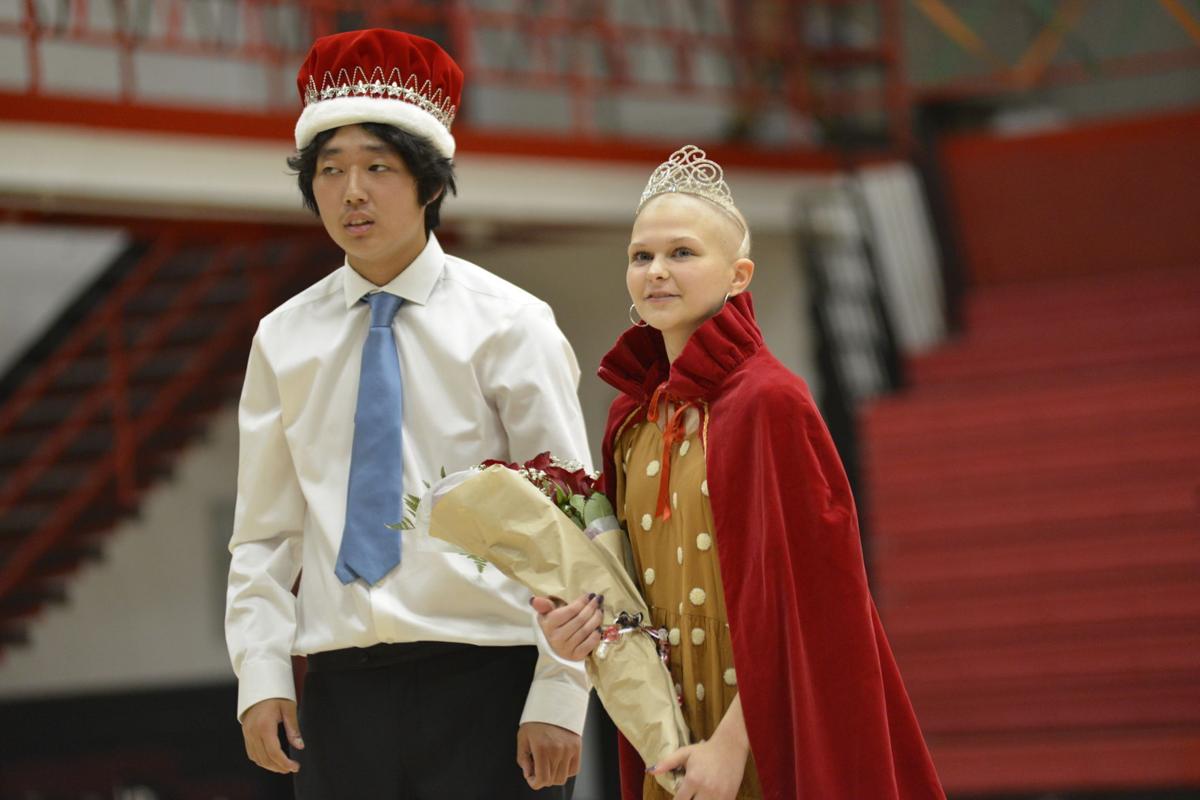 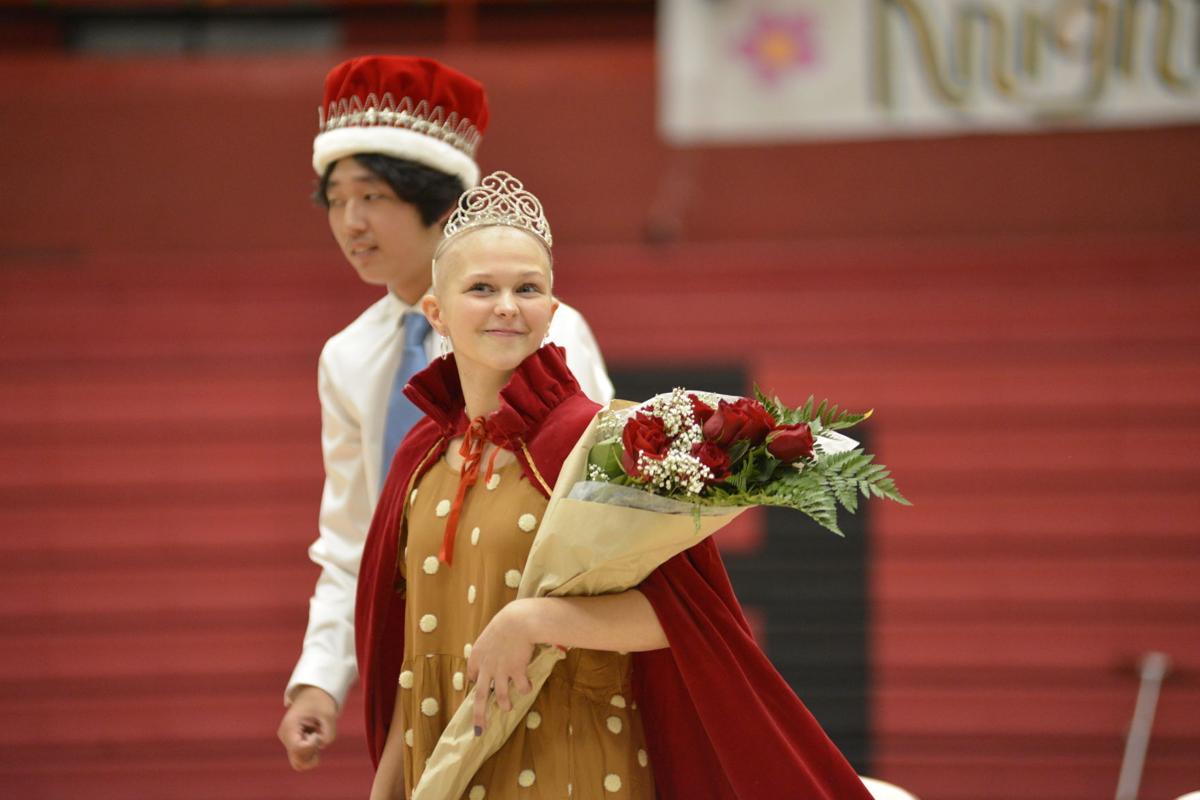 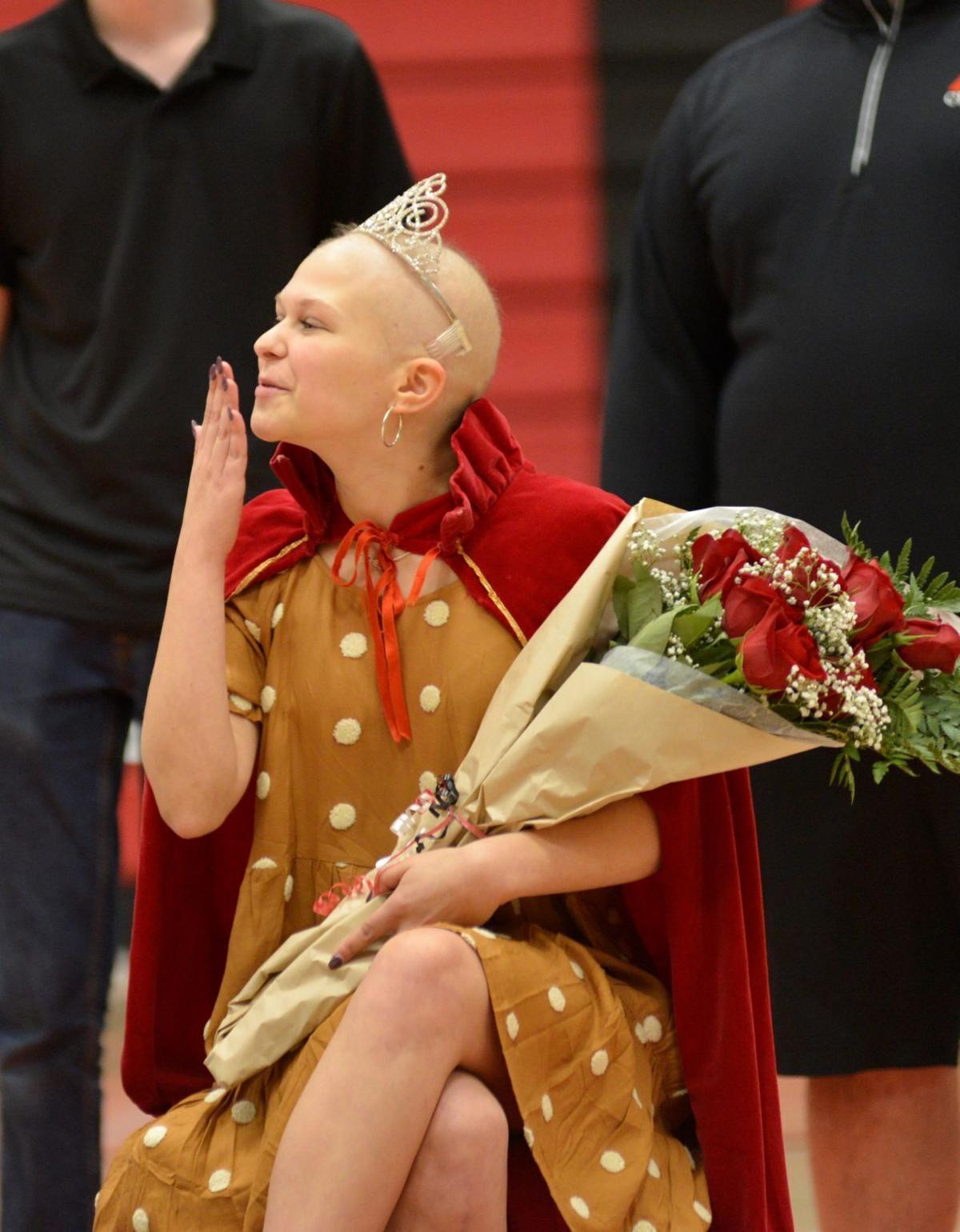 This year's homecoming queens for Bettendorf and Assumption high schools have more in common than their crowns.

They turn 18 this month.

Each has a younger brother.

Both plan to study science in college.

And they were diagnosed with cancer in June.

The teens had heard of one another, but they hadn't met. Last week, a reporter for the Quad-City Times/Dispatch-Argus arranged for Charly and Rachel to meet for the first time, along with their mothers.

This is their story.

Charly has climbed this mountain before.

She was 8 years old in the spring of 2012 when she was diagnosed with stage 4 Ewing's sarcoma, a form of bone cancer.

The tumor in her ribs had leaked into her lung, and she underwent chemotherapy, radiation and surgery. She was declared cancer-free in early 2013.

Charly's back at school after cancer battle

In May, Charly passed out during a blood drive, striking her head. The bump on her head didn't go away; it got bigger.

In June came the diagnosis: Ewing's was back. The cancer already is rare. Having it reappear in another part of her body is exceedingly rare.

Charly dug in her heels again.

"We had to pick between a treatment that gives you two years, and you hope for better treatment down the road, or this terrible treatment that's killer on your body with no guarantees," her mom, Tara Erpelding, said. "Charly chose the harder one.

Charly just finished her seventh round of chemo and started radiation therapy as the chemo continues.

Rachel Schneider contracted COVID-19 along with other family members in November. While the others got better, Rachel's cough hung on.

Doctors tried antibiotics and guessed that a family trip to Arizona may have exposed her to a fungus. But she wasn't improving, so they speculated it either was a long-haul case of the coronavirus or cancer.

Rachel has had eight chemo treatments and has five to go. She's being treated by a Quad-City oncologist, rather than in Iowa City like Charly, because her parents are confident in the long-standing and high-performing Hodgkin's treatments.

"The protocol is pretty tried and true," her mom, Nicole Schneider, said. "Almost from the first treatment, she's felt better. She's getting more side effects now, such as fatigue, from the accumulation of the drugs.

"Today they say Rachel's prognosis is very good. Charly's parents heard that how many years ago? Having it back, that has to be a gut punch. That's terror on a different level."

Charly and Rachel meet for the first time Wednesday in the backyard of the Schneiders' home in west Davenport.

"Can I hug you?" Charly asks. "People are usually asking me that."

They laugh as they embrace, their moms smiling from their lawn chairs.

Hair is important to people, especially teens. Both girls rub a hand over their bald head as they agree that losing their hair in great clumps was "the worst" part of the chemo consequences.

"I never did the wig thing," Charly says. "I'm much more of a hat person."

"I wore my wig once, like the day I got it," Rachel says.

"I got some cute hats on Amazon," Charly says. "I'll send you the link. Wigs are like big, heavy, hairy hats."

And they laugh again.

Then it's time for a Q&A, beginning with chemo. Everyone knows it's bad. How bad is it?

Rachel: "I definitely try to think of the positive parts of it. If I'm being honest, though, it's not as bad as people make it out to be."

Charly: "Chemo is as much mental as physical. It is pretty hardcore, but you know it's helping."

Rachel: "Like she said, it definitely is a mental game."

"The second time around is much different. I could bring back that mental space I needed to be in. You can't worry about what might happen. As a cancer survivor, you shouldn't do that to yourself."

Rachel: "I know what you mean. I didn't want to put myself in that mindset until I had to."

As Charly and Rachel bound away to a corner of the yard to be photographed together, their moms, Tara Erpelding and Nicole Schneider, have a chance to talk.

Though meeting for the first time, they chat like old friends. Having a kid with cancer makes them kindred spirits in a way they never wished for.

Anxiety, guilt, fear — no, terror — are almost always present, especially when their girls aren't with them, they say.

Charly and Rachel now are giggling from one corner of the yard, and the moms are leaning into their conversation: Mental distraction impacts their short-term memories; they worry whether their sons are getting enough attention; the near-constant beating back of the what-ifs.

"I wish we could just keep her home with us," Nicole says. "Her life needs to go on, though."

Being young, being strong

Charly and Rachel are asked what people don't know about cancer and what they've learned about themselves by having it.

Charly: "You definitely learn more than you want to. It's kind of like graduating high school, though I haven't done that, yet."

Rachel: "My friends have told me, verbatim, 'You're not the same person. You're so much stronger.'

"The support of my friends and my parents and teachers, everyone — I know I wouldn't be able to do it without that support. Their care and love is absolutely endless."

Charly: "We talk about how far we've come, but we also have breakdowns, probably more than others. Support is incredibly important, and it's so lovely to have it. People look for everything and anything they can do."

How much do they think about their futures?

Charly: "It's important to stay in the present. I always try to live in the moment.

"Being a high school senior, I try to soak it all up."

Rachel: "I've been on a few college visits. Like Charly said: It's senior year; some other things can just wait."

Charly: "Right. Don't let it change your plans. Don't let your life revolve around an illness."

How are their little brothers coping?

Charly: "My brother (Will) and I have always gotten along freakishly well. He had a hard time, definitely, when I was diagnosed a second time."

Rachel: "I'm old for my age, and he (Vaughn) is young for his age. He asks how I'm doing, and I love hearing about his day. At the end of the day, you just love each other."

Rachel: "Right. You want to be honest without scaring them."

When Charly's rounds of radiation conclude in mid-November, she'll have more scans, maybe a stem-cell transplant.

The recurrence of Ewing's, especially in a place other than her ribs, is so unusual, doctors aren't sure what to make of it, her mom said.

"We can't protect her from things now the way we could when she was eight," Tara Erpelding said. "She has her own thoughts, opinions and input on decisions. She has to think about a lot of things she never should at 17."

She's college-bound, for sure, and a degree in a science field also has been decided. She is president of the National Honor Society at Bettendorf High.

Rachel also spent the summer in treatment, though she was fortunate to be an out-patient. She's still making cheer practices, but the cumulative effects of chemo are bearing down.

A National Honor Society inductee, Rachel is awaiting word on her application to the University of Iowa's pre-med program.

She will graduate from Assumption High School as Charly graduates from Bettendorf, both with honors.

"These girls have so much to teach us adults about grace," Nicole's mom said.

Yet another thing the homecoming queens have in common.

Photos: Assumption celebrates homecoming with a 41-10 win over Central DeWitt

The Quad-City Federation of Labor on its Facebook page is reporting that a UAW Local 79 member has died in a traffic accident this morning.

Steven Springer, 54, of Hampton, pleaded guilty on Oct. 21 to conspiracy to distribute heroin while possessing a firearm in furtherance of that crime.

A Des Moines-based church that uses a hallucinogenic drug in religious ceremonies is challenging the Internal Revenue Service’s decision to deny it tax-exempt status.

A first-of-its-kind study of rural Iowa creeks and rivers found traces of synthetic chemicals that are toxic and persist in the environment indefinitely at sites across the state.

DES MOINES — With booster shots for all three COVID-19 vaccines all approved by federal regulators, the state’s public health department has i…

Rain slows fieldwork, but harvest still ahead of schedule

The Iowa harvest continues ahead of normal with 60 percent of Iowa’s corn and 83 percent of soybeans harvested despite rainfall last week, acc…

CEDAR RAPIDS — Retired Admiral Michael Franken thinks Iowans are looking for a U.S. senator with a sense of “inventiveness” to turn progressiv…

A safety complaint was filed at John Deere Seeding Group in Moline on Oct. 19 to the Occupational Safety and Health Administration (OSHA) in Peoria.

Assumption Homecoming Queen Rachel Schneider, 17, and Bettendorf’s queen, Charly Erpelding, 17, pose for a portrait at Rachel’s home in Davenport. Both teens are currently being treated for cancer. Their parents are Tara and Andy Erpelding and Nicole and Caine Schneider.