DES MOINES — Only school districts in Iowa counties where the two-week average of positive new coronavirus tests is at least 15% will be allowed to operate completely online under state guidance issued Thursday.

With no counties currently above that threshold, at this point it appears all Iowa students are headed back to school in their district’s buildings this fall.

The new state guidance covers a wide array of scenarios, including when school districts will be allowed to divert from in-person learning to online-only or hybrid methods, and what actions should be taken once a student or staff member tests positive for the coronavirus.

“Education is fundamental to the well-being of our children and our teachers are essential to ensuring that our school kids return to learn rather than mark time and lose ground,” Reynolds said. “And I know that together we can do this safely and responsibly.”

The state guidelines use counties’ rate of positive coronavirus tests to determine how schools may operate.

Districts in counties where the positivity rate is less than 15% must operate on-site with exceptions only for families who request a hybrid option or students who are quarantined.

Only once a county surpasses a positivity rate of 15% will a district in that county be allowed to petition the state education and public health departments for a two-week waiver to conduct 100% online or remote learning. Waivers must be renewed.

As of Thursday afternoon, no Iowa county was above the 15% threshold, according to state public health data. Humboldt County was the highest at 13%.

The statewide positivity rate has been 15% or higher on only two days since early June.

The World Health Organization says positive rates should be 5% or lower before areas should reopen. The federal Centers for Disease Control and Prevention uses community transmission terms like minimal, moderate and substantial, but does not assign positive test rates to those terms.

U.S. Surgeon General Jerome Adams was asked recently in an interview with CBS News conducted over Twitter at what point a school should close due to a coronavirus outbreak in the community.

“There is no hard cutoff right now, but in general, we like to see positivity rates less than 10% in a community,” Adams responded. “There are also a number of other factors to consider — including trends, amount of testing, and local response capacity.”

Mike Beranek, president of the Iowa State Education Association, the state’s largest public educators union, issued a statement calling the state guidance an “outlandish notion of what constitutes minimal, moderate and uncontrollable spread of COVID-19 (the disease caused by the coronavirus).”

“Most importantly we are not just talking about numbers as we look at this decision,” Beranek said in the statement. “We are talking about children’s lives and the lives of the educators and the families who are affected.”

The guidance also suggests districts in counties with a positivity rate of at least 15% cancel school events and gatherings, close communal spaces like cafeterias, and consider regular health checks for students and staff.

The state guidance also addresses students and staff who test positive for the coronavirus, including a rule that staff may be allowed to return to work so long as they are not displaying symptoms if they are considered “critical personnel” and if there are “staffing shortages.”

The guidance also says students and staff may return to school as soon as 24 hours after a positive test, provided they have no fever, their symptoms are improving and it has been at least 10 days since their symptoms started, according to the new state guidance, which follows recent CDC guidance.

Anyone determined to have come in close contact with an individual who tested positive for the virus must quarantine away from school for 14 days, according to the state guidance.

That creates a hypothetical situation in which a person who tested positive for the virus could be back in school while anyone who came in contact with the person would be forced to remain quarantined for up to another two weeks.

Students will be back in the classroom full-time in Clear Lake this fall.

Iowa cracking down on social distancing in bars, restaurants

Iowa officials are planning to issue fines and license suspensions in order to enforce social distancing requirements in bars and restaurants during the new coronavirus pandemic, a pair of state agencies announced Thursday.

The Mason City Danzers have launched a TikTok challenge. Watch it here.

The Iowa chapter of the American College of Physicians said Thursday it sent a statement to Gov. Kim Reynolds calling for masks to be worn in community settings to slow the spread of coronavirus.

Reynolds defends lack of mask mandate, says some people disagree with the science

Public health and infectious disease experts are in near unanimous agreement that face coverings are effective in slowing the spread of the new coronavirus, and multiple studies have verified that.

At a time when Iowans need accurate and complete information, some state agencies, including the Governor’s Office, are ignoring questions from reporters, refusing interviews and stalling on public records requests — sometimes for months.

Iowa Gov. Kim Reynolds’ public approval rating for how she has handled the new coronavirus pandemic is the lowest of any U.S. governor, according to a new survey. 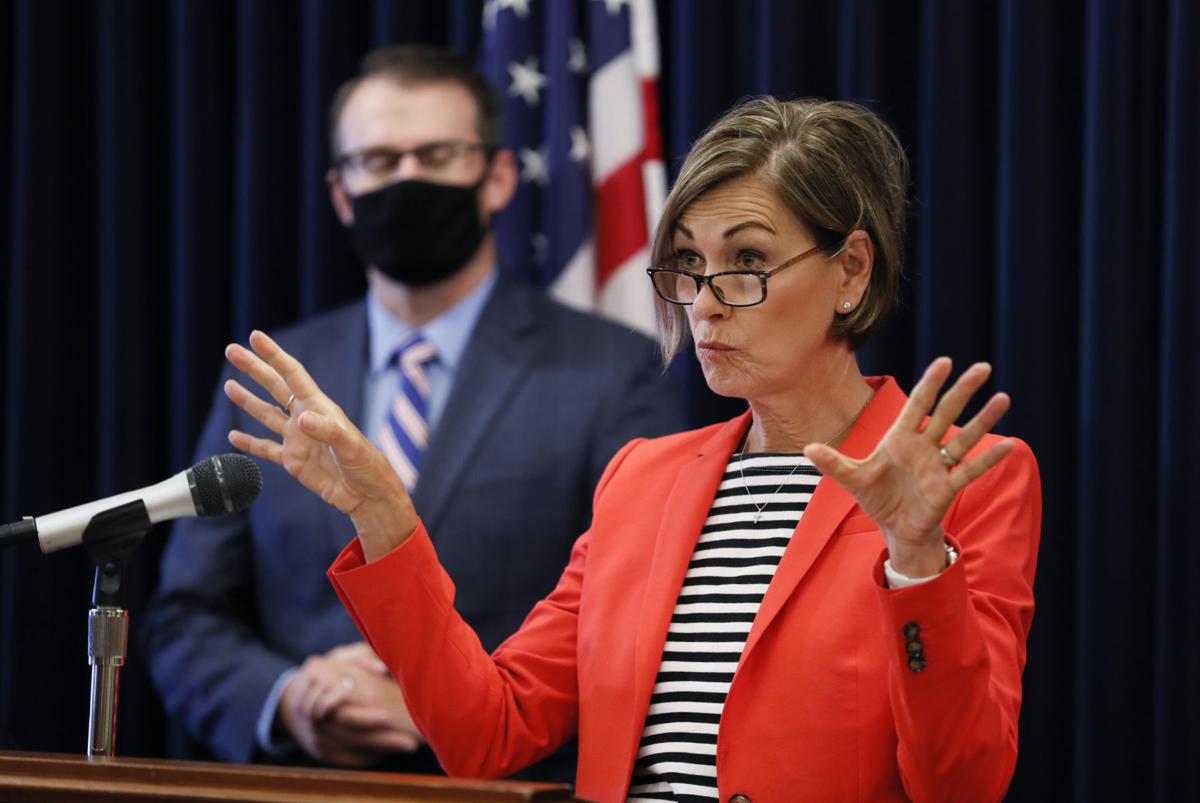 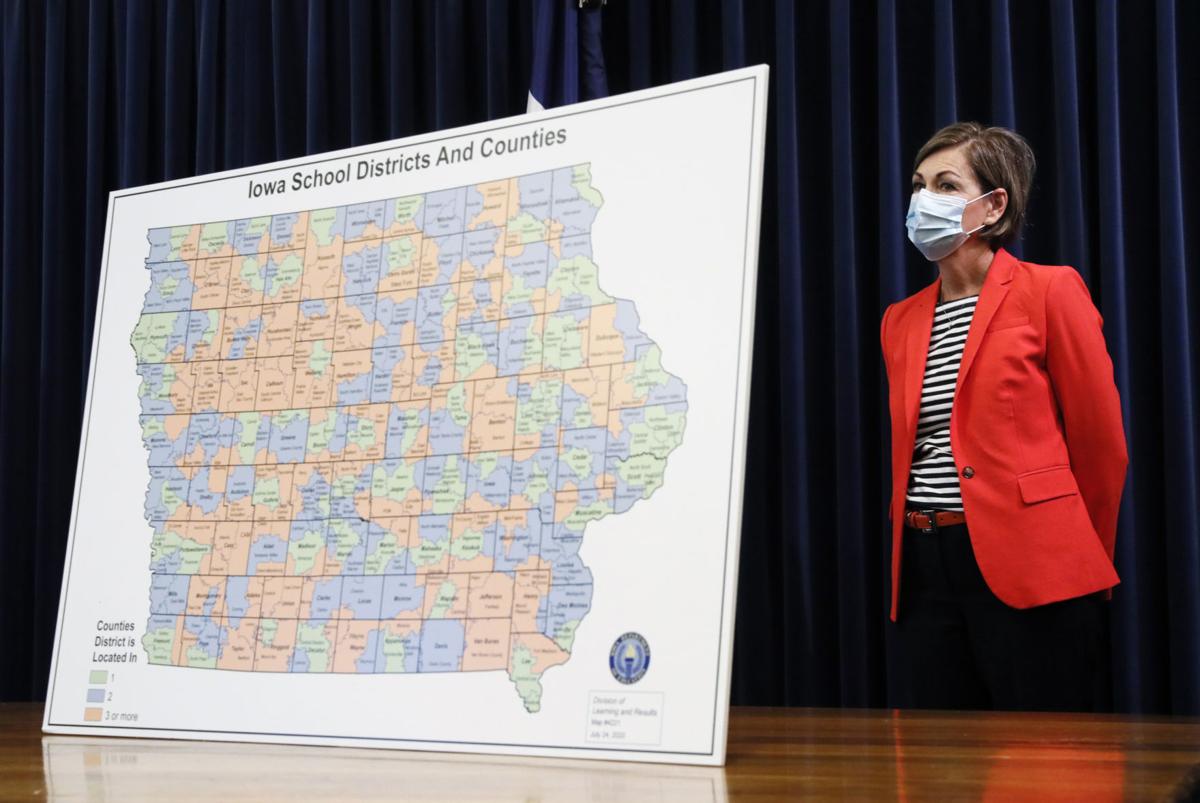 Iowa Gov. Kim Reynolds listens to a question during a news conference Thursday on the state's guidance for returning to school.