Iowa’s homicide rate hit a record high in 2020, according to a report from the Federal Bureau of Investigation.

There were 111 homicides in Iowa in 2020, according to annual FBI data. That’s a nearly 60% increase from 2019, when Iowa recorded 70. It’s also the largest number of Iowa homicides since the FBI began tracking the statistic in 1979.

When other violent crimes like rape, robbery and aggravated assault were included in the data, 2020 was the second most violent year in Iowa’s recent history. There were a total of 9,601 violent crimes last year, including murders.

The most violent year was 1995, with a record 10,071 violent crimes. But there were only 51 homicides that year, according to the FBI data.

In Cerro Gordo County, there were no homicides in 2020. However, violent crimes continue to be on the rise in the county and its two largest communities.

In the county 15 violent crimes were committed in 2020, and 15 crimes resolved, though they might have been crimes committed in the same year.

While the number of violent crimes in Cerro Gordo remain relatively small, they are on the rise, according to the data. Six violent crimes were reported  in 2010 and 15 in 2021, for an overall increase of 150%. 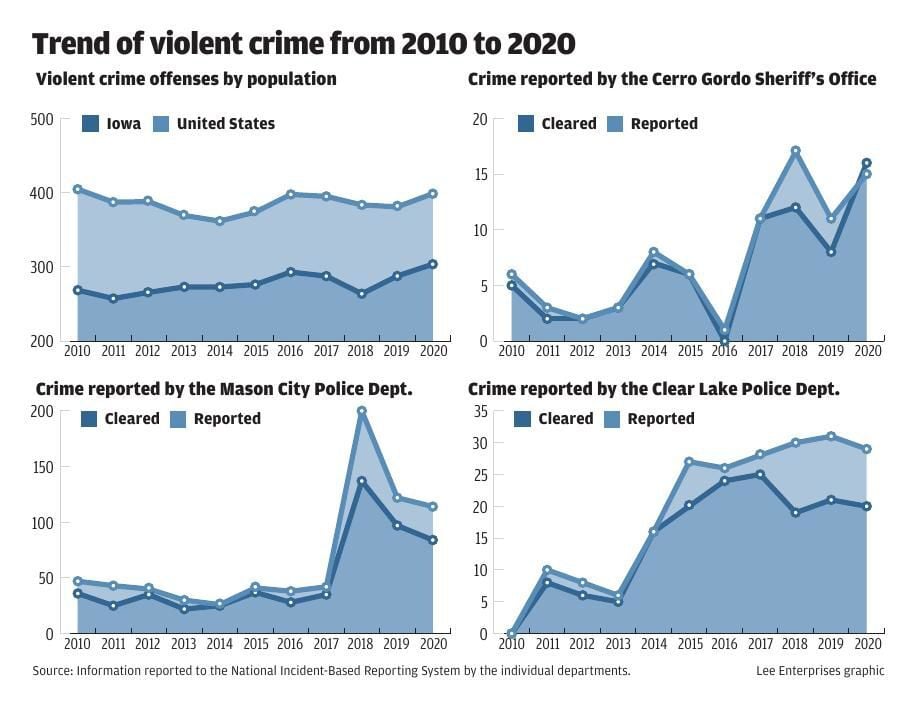 That is also the case in Mason City, where violent crime has increased more than 200 percent since 2010 and the gap in solving violent crimes has widened. In 2010, 47 violent crimes were reported, and 36 cases were solved. By 2020, that number had grown to 114, with 84 resolved. Crimes are not necessarily solved in the same year they are reported.

The offenders in Mason City last year were slightly older, with nearly a third of the crimes being perpetrated by someone between 30 and 39 years of age. The victims were mostly younger, with 27 percent being 20-29 and 1 in 5 being under 19.

And Mason City is not alone in the trend of increasing violent crime -- Clear Lake has seen a marked increase as well. It reported zero violent crimes in 2010 but 29 of them in 2020. The city has also seen its solve rate slide, from 100 percent in 2010 (since there were no violent crimes) to 69 percent, or 20 of 29, last year.

As was the case in both Cerro Gordo and Mason City, the vast majority of the violent crimes in Clear Lake committed were by men, 71%. The victims were mostly women, 66% percent.

The overall violent crime rate increased by about 5%.

Nationally, homicide rates still remain lower than they did in the early 1990s, when there were about 24,000 murders a year.

The FBI’s report does not provide analysis or information about why certain crimes become more or less common over time.