CEDAR FALLS – Love was in the air Tuesday night at Overman Park, a place where the Schmidt family often gathered to enjoy the fresh air and community events.

A couple of hundred people attended an hour-long celebration of life ceremony. Most sat in lawn chairs while watching and listening to stories and anecdotes spoken about Tyler and Sarah Schmidt and their six-year-old daughter, Lula.

The Cedar Falls family members were found shot to death July 22 in their tent at Maquoketa Caves State Park campground in Jackson County after what appeared to have been a random act of violence. Arlo Schmidt, their nine-year-old son, survived the attack.

The Schmidt and Morehouse families joined Mayor Rob Green, who led the event in front of the Overman Park stage and from behind a table with photographs and flowers.

Green read the obituary published in The Courier before he, Ambri Refer, an employee of the Cedar Falls Public Library, and family friends Burt Flather and Monica Iliff shared thoughts and memories that been collected and submitted by friends and family over the last few days.

“The thing that keeps rising to the top when I think about Sarah and Tyler is how dedicated they were to doing the very best thing for Arlo and Lula at every turn,” read Green from one friend’s submission. “Most of the conversations I’ve had with Sarah over the past nine years have been about how to make the best and therefore hardest decisions about parenting.”

The friend knew her as a talented research scientist in Lawrence, but “was lucky enough to catch her in her newfound element at the Cedar Falls Public Library this fall, and she was just so happy and so good at this as well.”

One aunt wrote that Tyler and Sarah Schmidt were “dedicated to their family and loved the community. They were the most the kind, sweet and loving people and we will miss them dearly.”

And one six-year-old classmate of Lula’s wrote how she had the “longest hair in our whole class” and added a smiley face at the end of the statement.

Teresa and Brian Carr of the Sartori Park neighborhood association also shared a heartfelt anecdote about what the couple meant to their community.

A grief counselor also was on hand to help the community work through the tragedy. The family also read a statement.

Nate Gainer was there with his 7-year-old daughter, Wren, who was a best friend of Lula in kindergarten at Lincoln Elementary School and knew the family from school concerts and fairs.

The girls would pretend to be cats together, so that’s what Wren drew on a crafted flower, one of the many arts and crafts offered at the event in memory of the family.

“I enjoyed seeing the community support and doing crafts in honor of them,” Nate Gainer said.

Ai Wen of Cedar Falls was accompanied by her husband, Kenneth Elgersmith, and their seven-year-old daughter. They’d often see the family at the library, and their daughter went to a camp with Lula.

“It was a lovely service, and very well organized,” said Wen. “It was great that the community showed and showed up.”

The ceremony was “needed,” Elgersmith added.

D’Andre Moore of Minneapolis graduated from Northern University High School in 2005 with Tyler Schmidt and came with former classmates.

“He was the first person who was nice to me” after Moore transferred to the high school from Waterloo, he said of Tyler Schmidt. “He was genuinely a good person.”

It was a “beautiful” ceremony, he said. “I’m glad we could have been here for you buddy.”

Tyler’s aunt shared aloud to the community about the “beautiful theme of joy and effervescence and how much happiness they brought to be everybody.”

Nearly $272,000 has been raised through a GoFundMe page set up in support Arlo: https://www.gofundme.com/f/arlo-schmidt.

The boys were transported to Lakes Regional Healthcare in Spirit Lake, where the 15-year-old was pronounced dead. The 14-year-old was treated and released.

Neighbors called police after spotting the 4-year-old in nothing but a diaper. Then recently, the child had apparently run a block and a half away from his home naked.

The boy lost control of the UTV on a grassy area, causing the vehicle to roll over on its top and partially eject him.

The country music star took to social media to explain the situation and ask the guilty party to start cutting some checks.

DES MOINES — Mallory McMorrow said she “vividly” remembers Zach Wahls’ 2011 speech on the floor of the Iowa House in defense of same-sex marriage.

All three victims were taken to the Nebraska Medical Center. Two were taken by ambulance, while one person with critical injuries was taken by helicopter.

Ernst calls for change to ‘strengthen’ bill she once supported

Authorities allege Tony Cecil Orr Jr. began shooting at the clerk at Logan Convenience Store as his brother yelled at the employee. The case is in the hands of the jury

Laws such as Iowa's ban abortion when a “fetal heartbeat” can be detected, though that does not easily translate to medical science.

The three people were injured outside the park when shots were fired from a single vehicle, according to a spokesperson for the park, which is located about 45 miles north of Chicago.

Volunteers create carpet made of flowers in Belgium

Egypt church fire: At least 41 killed as fire breaks out during mass in Giza

Egypt church fire: At least 41 killed as fire breaks out during mass in Giza 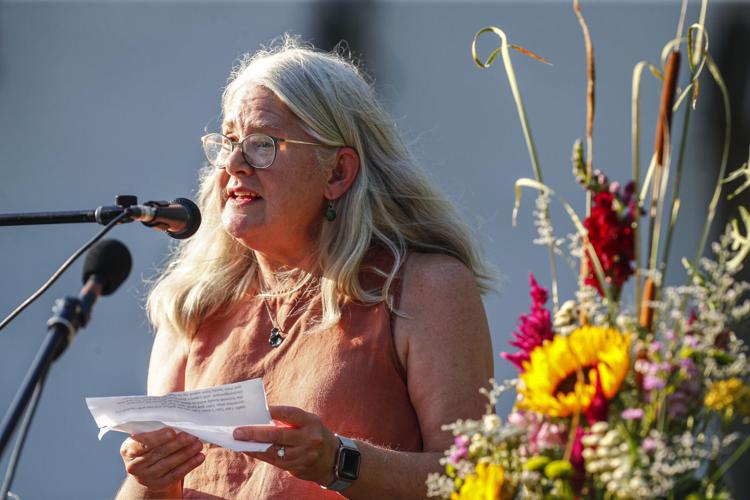 Nita Schmidt, aunt of Tyler Schmidt, reads a statement from Tyler's parents, Timothy and Debra, during the Celebration of Life vigil for Tyler, Sarah, and Lula Schmidt held at Overman Park on Tuesday in Cedar Falls. The Schmidts were shot and killed at Maquoketa Caves State Park on July 22. 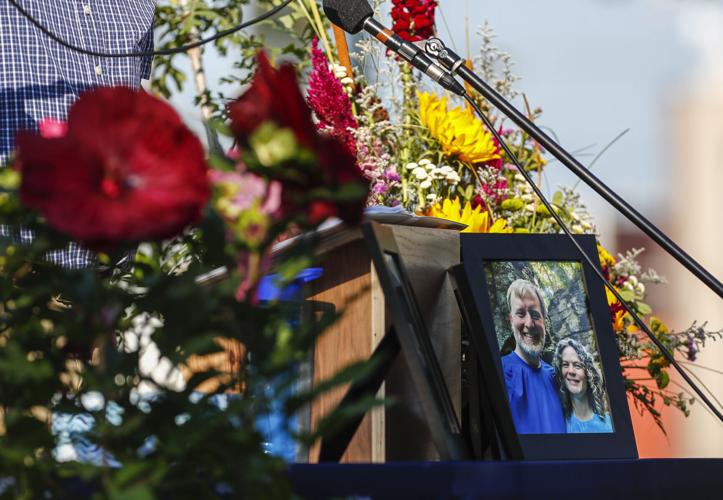 A photo of Tyler and Sarah Schmidt sits on the podium during the Celebration of Life vigil for Tyler, Sarah, and Lula Schmidt held at Overman Park on Tuesday. in Cedar Falls. The Schmidts were shot and killed at Maquoketa Caves State Park on July 22. 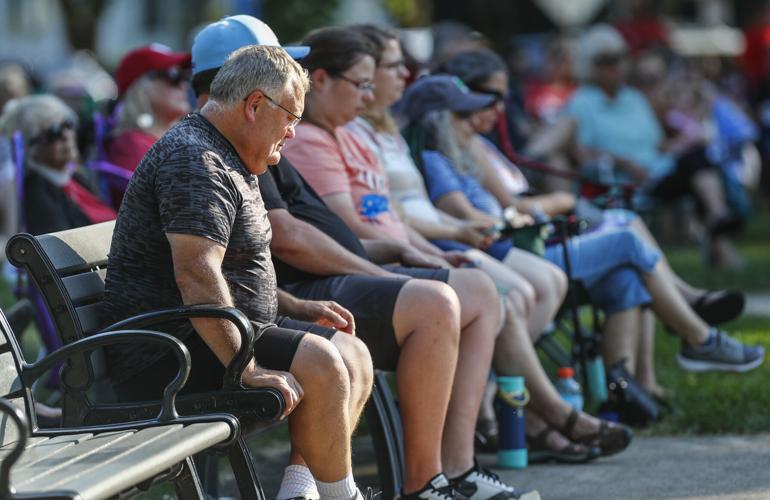 Friends, family and neighbors gather during the Celebration of Life vigil for Tyler, Sarah, and Lula Schmidt held at Overman Park on Tuesday, Aug. 2 in Cedar Falls, Iowa. The Schmidts were shot and killed at Maquoketa Caves State Park on July 22.