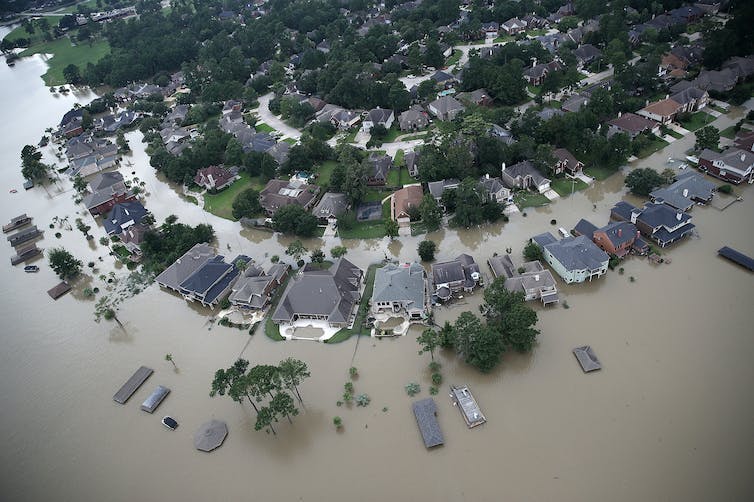 A ‘100-year flood’ doesn’t mean you’ll be flood-free for the next 99 years. Win McNamee/Getty Images

Unfortunately, many people believe that if they experienced a 100-year flood this year, they will not see another one like it for 99 years.

It just doesn’t work that way. In reality, the chance of being flooded next year, and the year after that, is the same as it was when the house flooded the first time – 1%.

One percent is the same as a 1-in-100 chance. Hence, the shorthand: 100-year flood. The Federal Emergency Management Agency uses that measure when it draws flood plain maps – the maps that show which areas are most likely to be flooded and that insurers use when they set rates.

Because of the confusion, many flood plain managers want to do away with the term “100-year flood,” but that creates another problem. People generally do not have a good sense of risk as expressed as a probability, especially when that probability appears small. Look no farther than COVID-19, where about half the U.S. population was not concerned about a 1% chance of dying from infection while hundreds of people in the country were dying from it every day.

A better way to understand the risk is to think about a home with a 30-year mortgage.

What’s the minimum risk of a home being flooded over 30 years if it’s in a 100-year flood plain? At least 26%, since we’re looking over a longer period and there’s not a guarantee of seeing a 100-year storm. Given that homes tend to be the biggest investment most Americans make, that probability may cause people to think about buying flood insurance.

[Get the best of The Conversation, every weekend. Sign up for our weekly newsletter.]

In some cases, the risks are even higher. Since some homes sit lower than their neighbors, risk in a 100-year flood plain isn’t consistent across the entire area. A homebuyer might consider their choice more carefully if the property actually has a 50% chance of flooding over 30 years. At some point, we’ll have better tools to easily assign risk home by home.

Why are there so many 100-year floods now?

With climate change, the flood risk can grow over time with stronger storms and heavier rainfall.

Flood plain statistics can be confusing, and that confusion can be deadly. Developing better tools to estimate flood risk and finding better ways to talk about that risk can better inform people of the actual risks.

The Conversation U.S. publishes short, accessible explanations of newsworthy subjects by academics in their areas of expertise.

Robert Mace received funding from FEMA when he previously worked for the State of Texas.

Cities with the most properties at risk of flooding

Cities with the most properties at risk of flooding

Crash 'likely' due to storm kills 10, including 9 children, in Alabama

Much of the country is experiencing storms, extreme heat or wildfires. Here are the latest updates from Tropical Depression Claudette and other severe weather events across the U.S.