Iowa house speaker-select Pat Grassley speaks during an interview with Gazette reporters at the Iowa Capitol in Des Moines on Thursday, Dec. 19, 2019. 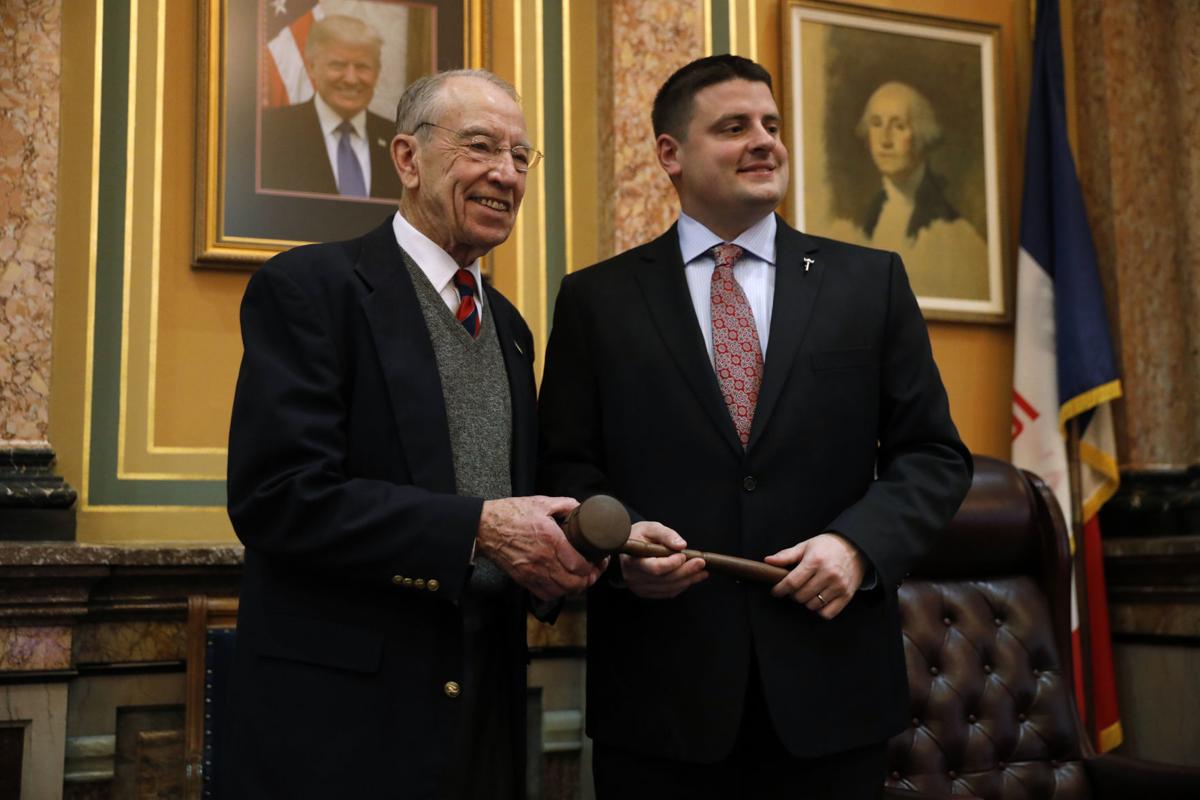 Iowa House Speaker Pat Grassley talks with poses for a photo with his grandfather U.S. Sen. Chuck Grassley, R-Iowa, left, after taking the oath of office during the opening day of the Iowa Legislature, Monday, Jan. 13, 2020, at the Statehouse in Des Moines, Iowa.

The grandson of a seven-term U.S. senator, Grassley is about to become speaker of the Iowa House of Representatives — what they see as a step in his preparation to ascend to the U.S. Senate if the elder Grassley doesn’t seek reelection at age 89 in 2022.

Pat Grassley has heard the theories for years and finds them entertaining.

“If my grandpa was smart enough in 1960 when my dad was born that he would have a grandson 60 years later in the Legislature and so on ... honestly we spend more of our time talking about other things than politics,” said the younger Grassley, who is expected to be formally elected Monday as speaker of the House — the chamber’s top leader.

“Besides,” he added, “I don’t see any signs Grandpa is making plans to go anywhere.”

That aw shucks, one-of-the-guys persona that Grassley exhibits is real, according to Republican Party of Iowa Chairman Jeff Kaufmann, who mentored Rep. Grassley during his first term in the House 14 years ago.

“He came in without any kind of attitude that because of his name he had a leg up,” Kaufmann said. “I’ve never met anyone who used his political clout less.”

But he’s no pushover, Kaufmann added.

“He has rock-solid principles and has the quality of any successful politician of being able to plant feet when that’s what his caucus wants,” he said.

What his caucus wants will determine where he plants his feet, Grassley said. He talks about bottom-up consensus-building rather than telling his 53-member caucus what it should do.

“I have to be willing to take the suggestions of the members,” he said during an interview in the House chambers, where he has served since 2007.

For example, Grassley said he has had more conversations with his GOP colleagues on funding the Iowa Water and Land Legacy in the past two months since becoming speaker-select than in the two years before.

He anticipates the House taking action on filling the fund, “but I need to know where they are and where they want to go.” Before acting, he said, “you have to be able to get consensus within your caucus on issues that you see as priority, that they see as priorities.”

His philosophy comes from serving as chairman of the Agriculture and Appropriations committees. Putting together a $7 billion state budget has a lot of moving parts and there are a lot of people hoping to get their priorities included.

“I don’t ever remember one time walking in and saying, ‘This is how we’re going to do it,’” Grassley said.

Grassley talks a lot about consensus, and Democrats find that encouraging. A speaker’s style and preferences are “hugely impactful,” said House Minority Leader Todd Prichard, D-Charles City. “He has a lot of power.”

Prichard has worked with Grassley on the Agriculture Committee and thinks he has a pretty good idea of how the speaker will operate.

“My sense is that Pat wants to build consensus because that’s how he ran the Ag Committee,” Prichard said.

Since Republicans selected Grassley to lead the House, he’s reached out to Prichard and the Democratic leader believes there is a commitment to work together and to be transparent with each other.

Rep. Mary Mascher, D-Iowa City, who has worked with Grassley on the Appropriations Committee, is giving the new leader the benefit of the doubt — at least for now.

“He’s been open to our suggestions and ideas at times, and I hope that’s the way he continues to lead,” she said.

She’s encouraged by Grassley’s interest in addressing child care, for example, and how committee chairs have reached out during the interim to ask minority party members about their priorities.

“That’s what Iowans want and deserve — for us to identify things we have in common so we don’t have to be in adversarial positions all of the time,” Mascher said.

There may be opportunities for cooperation this year, especially if Republicans want to raise the sales tax to fund the Natural Resources and Outdoor Recreation Trust Fund.

“They will need Democrats to pass that, so we will have a seat at the table,” Mascher said. “I think people want to see bipartisan support for those sorts of things.”

Mascher, a House member since 1995, expects Grassley’s style of leadership to be different from former House Speaker Linda Upmeyer in that he “has been very reluctant to put himself out there. He says he wants to know what his caucus thinks before making a decision.” Upmeyer, from Clear Lake, announced last year she was stepping down as speaker and not running for reelection in 2020.

That sort of bottom-up leadership may lead to more consensus on issues the House has struggled with in recent years, such as expanding access to medical cannabis, for example, she said.

He sees consensus-building as a strength — something he learned from his grandfather.

“He told me not to act like I know everything and 14 years later that’s still the best advice,” Grassley said.

There was a time he wasn’t sure if he would get his grandfather’s advice — or support.

“The first time I really expressed interest in this job, I called him to get his thoughts,” Grassley said. “There was a pause on the other end. I thought, ‘Well, this is going to be the shortest political run in history.’ Then he laughed and said, ‘Well I usually don’t get involved in primaries, but I suppose since you’re my grandson I could.’

“I think he was 90 percent joking, but 10 percent serious. He had to calculate whether he wanted to get involved in a primary,” he said.

Grassley jokes about his relationship with his grandfather. “Grandpa” has been a U.S. senator all of his 36 years, so there wasn’t a moment when everything in life became political.

“It’s always been that’s your grandpa and that’s what he does,” he said. “It’s no different from if he owned the feed store in town. That’s just who he is and what he’s always done.”

He recalls going to Washington to see “grandpa” sworn into office and has appeared in campaign commercials shot at the Grassleys’ Butler County farm.

“Believe it or not, I used to be a cute kid, so they used to have me in all those,” he laughed.

He and Sen. Grassley farm together outside New Hartford. With Pat Grassley’s dad, Robin, they farm 1,700 acres of corn and soybeans, and Pat finishes about 200 head of cattle a year.

“My dad is the farmer,” Rep. Grassley said. “No one knows who my dad is and that’s the way he likes it. He’s the one that gives my grandpa and me the ability to do what we do.”

The two politicians spend more time talking about other things than politics. But that wasn’t always the case, said Sen. Grassley, who served as the Iowa House Appropriations Committee chairman before being elected to Congress.

He’s seen his grandson grow from a freshman legislator who “probably wouldn’t do anything without calling me up to ask me what I thought about this or that to a point where for the last five terms he probably doesn’t talk to me very much about the decisions he ought to make,” the senator said. “That’s all right, because I don’t have time to talk to him all the time.”

He and his wife, Barbara, are proud of Pat, the elder Grassley said last fall at a fundraiser where the speaker-select was roasted.

“I’m very proud of him because he did it all by himself,” he said about Pat being chosen to be speaker. “He didn’t ask me to help. Probably if he had asked me to help him his colleagues would have resented him and he wouldn’t have been successful. So we did it all on his own.”

Neither politician thinks Pat Grassley’s elevation in rank will affect their relationship.

At that roast back in November, Kaufmann asked the speaker-to-be:

“Will you expect your grandpa to refer to you as Mr. Speaker or will you still manage with Pat?”

“Christmas is coming up and we’re not quite done with harvest yet, so there’s a lot of things that could go wrong depending on how I answer this question,” Pat Grassley replied. “But, you know, as long as I keep calling him Grandpa, I suppose he can keep calling me Pat. I think that’s a pretty good arrangement.”

No regrets – yet – as Upmeyer steps down as Iowa House speaker

After spending the past nine years in leadership, including four as Speaker of the House, Linda Upmeyer thought stepping down might be bittersweet.

Iowa house speaker-select Pat Grassley speaks during an interview with Gazette reporters at the Iowa Capitol in Des Moines on Thursday, Dec. 19, 2019.

Iowa House Speaker Pat Grassley talks with poses for a photo with his grandfather U.S. Sen. Chuck Grassley, R-Iowa, left, after taking the oath of office during the opening day of the Iowa Legislature, Monday, Jan. 13, 2020, at the Statehouse in Des Moines, Iowa.