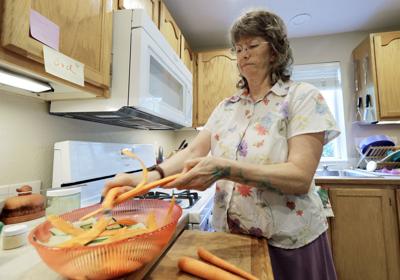 WASHINGTON (AP) — Millions of people covered under the Affordable Care Act will see only modest premium increases next year, and some will get a price cut. That's the conclusion from an exclusive analysis of the besieged but resilient program, which still sparks deep divisions heading into this year's midterm elections.

The consulting firm Avalere Health and The Associated Press crunched available state data and found that "Obamacare's" health insurance marketplaces seem to be stabilizing after two years of sharp premium hikes. And the exodus of insurers from the program has halted, even reversed somewhat, with more consumer choices for 2019.

The analysis found a 3.6 percent average increase in proposed or approved premiums across 47 states and Washington, D.C., for 2019.  This year the average increase nationally was about 30 percent. The average total premium for an individual covered under the health law is now close to $600 a month before subsidies.

Insurers are also starting to come back. Nineteen states will either see new insurers enter or current ones expand into more areas. There are no "bare" counties lacking a willing insurer.

Even so, Chris Sloan, an Avalere director, says, "This is still a market that's unaffordable for many people who aren't eligible for subsidies."

Nearly 9 in 10 ACA customers get government subsidies based on income, shielding most from premium increases. But people with higher incomes, who don't qualify for financial aid, have dropped out in droves.

It's too early to say if the ACA's turnabout will be fleeting or a more permanent shift. Either way, next year's numbers are at odds with the political rhetoric around the ACA, still heated even after President Donald Trump and congressional Republicans failed to repeal the law last year.

Trump regularly calls "Obamacare" a "disaster" and time again has declared it "dead." The GOP tax-cut bill repealed the ACA requirement that Americans have health insurance or risk fines, effective next year. But other key elements remain, including subsidies and protection for people with pre-existing conditions. Democrats, meanwhile, accuse Trump of "sabotage," driving up premiums and threatening coverage.

The moderating market trend "takes the issue away from Republican candidates" in the midterm elections, said Mark Hall, a health law and policy expert at Wake Forest University in North Carolina. "Part of the mess is now their fault, and the facts really don't support the narrative that things are getting worse."

Market stability also appears to undercut Democrats' charge that Trump is undermining the program. But Democrats disagree, saying the ACA is in danger while Republicans control Washington, and that premiums would have been even lower but for the administration's hostility.

"Voters won't think that the Trump threat to the ACA has passed at all, unless Democrats get at least the House in 2018," said Bill Carrick, a strategist for Sen. Dianne Feinstein, D-Calif., whose re-election ads emphasize her support for the health law.

As if seconding Democrats' argument, the Trump administration has said it won't defend the ACA's protections for pre-existing conditions in a federal case in Texas that could go to the Supreme Court. A new Kaiser Family Foundation poll found that Americans regardless of partisan identification said those protections should remain the law of the land.

In solidly Republican Arkansas, Democratic state legislator and cancer survivor Clarke Tucker is using the ACA in his campaign to try to flip a U.S. House seat from red to blue. Tucker, 37, says part of what made him want to run is the House vote to repeal the ACA last year and images of Trump and GOP lawmakers celebrating at the White House.

Business analysts say the relatively good news for 2019 is partly the result of previous premium increases, which allowed insurers to return to profitability after losing hundreds of millions of dollars.

"They can price better, and they can manage this population better, which is why they can actually make some money," said Deep Banerjee of Standard & Poor's.

Repeal of the ACA's requirement to carry insurance doesn't seem to have had a major impact yet, but Banerjee said there's "a cloud of uncertainty" around the Trump administration's potential policy shifts. Yet some administration actions have also helped settle the markets, such as continuing a premium stabilization program.

April Box of Spokane Valley, Washington, lives in a state where premiums could rise substantially since insurers have proposed an 18 percent increase. In states expecting double-digit increases, the reasons reflect local market conditions. Proposed increases may ultimately get revised downward.

Box is self-employed as a personal advocate helping patients navigate the health care system. She has an ACA plan, but even with a subsidy her premiums are expensive and a high deductible means she's essentially covered only for catastrophic illness.

Now in her 50s, Box was born with dislocated hips. She worries she could be uninsurable if insurers are allowed to go back to denying coverage for pre-existing conditions. She might need another hip surgery.

"It needs to be a level playing field for everybody," said Box. "We need to have universal coverage — that is really the only answer."

Tennessee is a prime example of the ACA's flipped fortunes.

Last year, the state struggled to secure at least one insurer in every county. But approved rates for 2019 reflect an 11 percent average decrease. Two new insurers — Bright Health and Celtic— have entered its marketplace, and two others —Cigna and Oscar— will expand into new counties.

Tennessee Republican Sen. Lamar Alexander called that a "welcome step," but argued rates could have been even lower if congressional Democrats had supported a market stabilization bill. Democrats blame Republicans for the failure.

To calculate premium changes, Avalere and The Associated Press used proposed overall individual marketplace rate filings for 34 states and D.C., and final rates for 13 states that have already approved them. Data was not available for Massachusetts, Maryland and Alabama. The average rate change calculations include both on-exchange and off-exchange plans that comply with ACA requirements. The government isn't expected to release final national figures until later this fall.

Use the search to find information by state, rate change or other criteria.

This story has been corrected to say premiums will be officially released later this fall, not in early November.

For the first time in half a year, U.S. families on Friday are going without a monthly deposit from the child tax credit. A closer look at the impact.

The CDC updated its mask guidelines. What to know about 'the highest level of protection'

Here's what you need to know about masks like N95s, where to get them and how to use them safely.

A newborn found dead in a duffel bag was left outside a barely staffed fire station. It’s exactly the outcome Illinois' Safe Haven Law was meant to prevent.

Ohio investigators have found the cremated remains of 89 people stored in boxes and bags at an abandoned church in Akron, authorities said.

Authorities say a man apparently took hostages Saturday during services at a synagogue near Fort Worth, Texas. It wasn't clear how many people were in the building.

Cracker Barrel ordered to pay man $9.4 million after he was served chemical in drinking glass

The man was having lunch at a Cracker Barrel in Tennessee when he took a sip of what he believed to be water. It turned out to be a cleaning chemical.

US weather update: Winter storm making trek across US, from Northwest possibly to Atlanta

A winter storm is sweeping across the U.S., from the Northwest through the Upper Midwest and threatening severe weather in the heart of the South. Get the latest forecast.

The tests will be provided at no cost, including no shipping fee. The White House said "tests will typically ship within 7-12 days of ordering."

COVID-19 deaths in the U.S. are climbing and modelers forecast 50,000 to 300,000 more Americans could die by the time the wave subsides in mid-March. 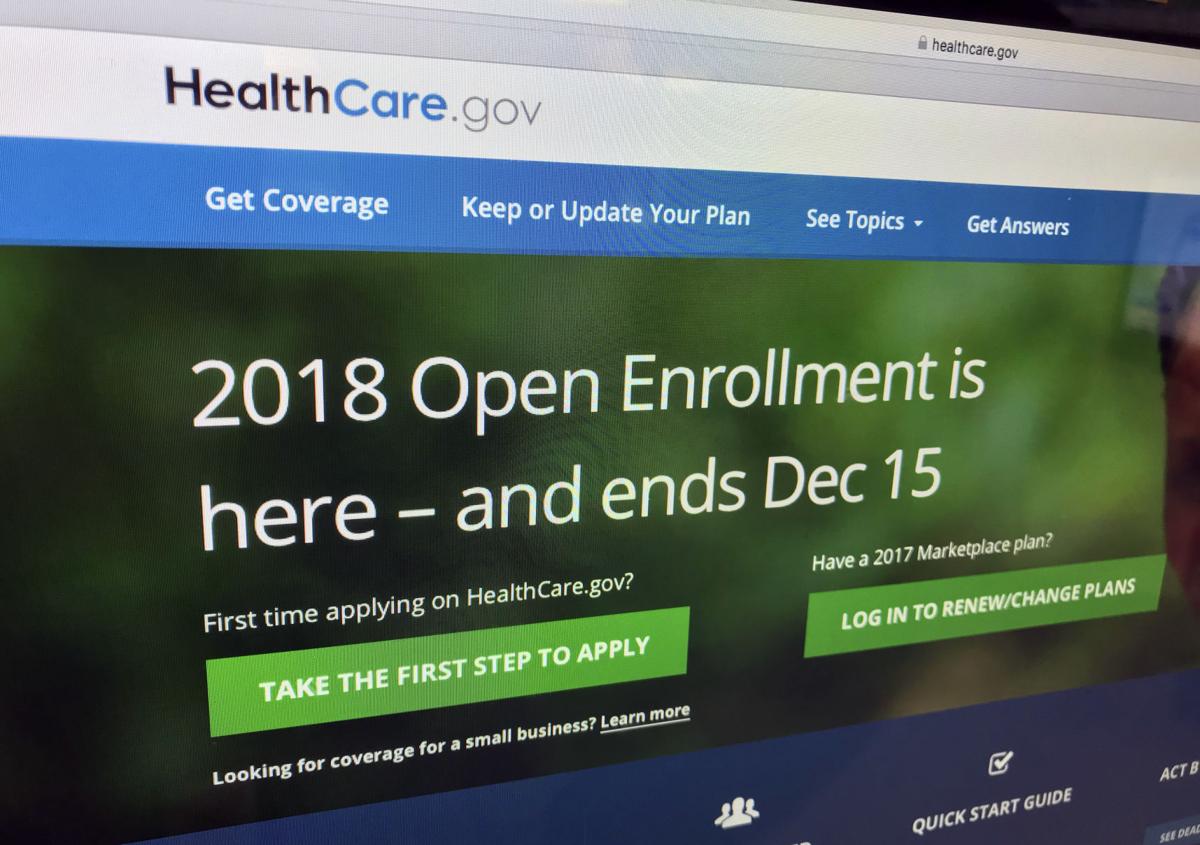 The HealthCare.gov website is photographed in Washington on Dec. 15, 2017. Millions of people covered under the Affordable Care Act will see only modest premium increases next year, and some will actually get a price cut. That’s from an exclusive analysis bound to surprise ‘Obamacare’ opponents and supporters. The study of state data by Avalere Health and The Associated Press also found that insurers aren’t bailing out of the ACA marketplaces anymore; some are coming back. The average premium increase across 47 states and Washington, D.C. will be 3.6 percent in 2019. (AP Photo/Jon Elswick) 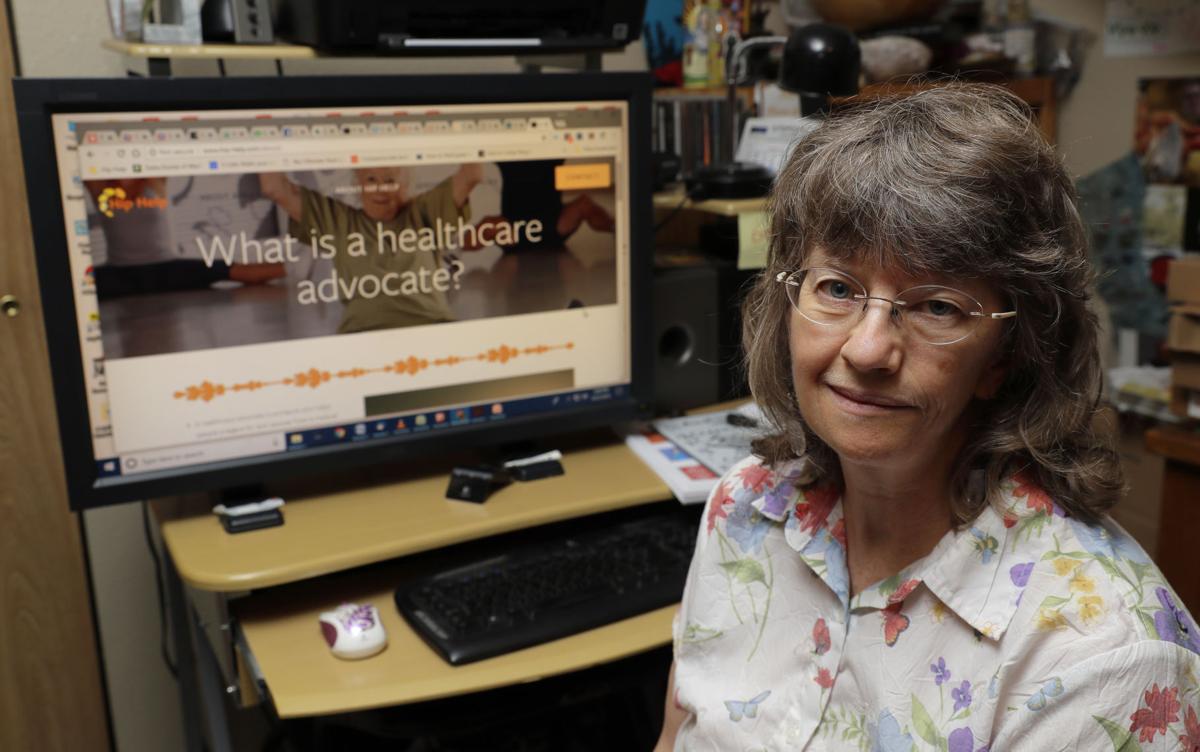 In this Aug. 22, 2018 photo, April Box poses for a photo at her home in Spokane, Wash. Box is a healthcare advocate and runs the website www.hip-help.com to help guide people through major surgeries and other aspects of the healthcare system. Millions of people covered under the Affordable Care Act will see only modest premium increases next year, and some will get a price cut. That’s the conclusion from an exclusive analysis of the besieged but resilient program that still divides voters heading into this year's midterm elections. (AP Photo/Ted S. Warren) 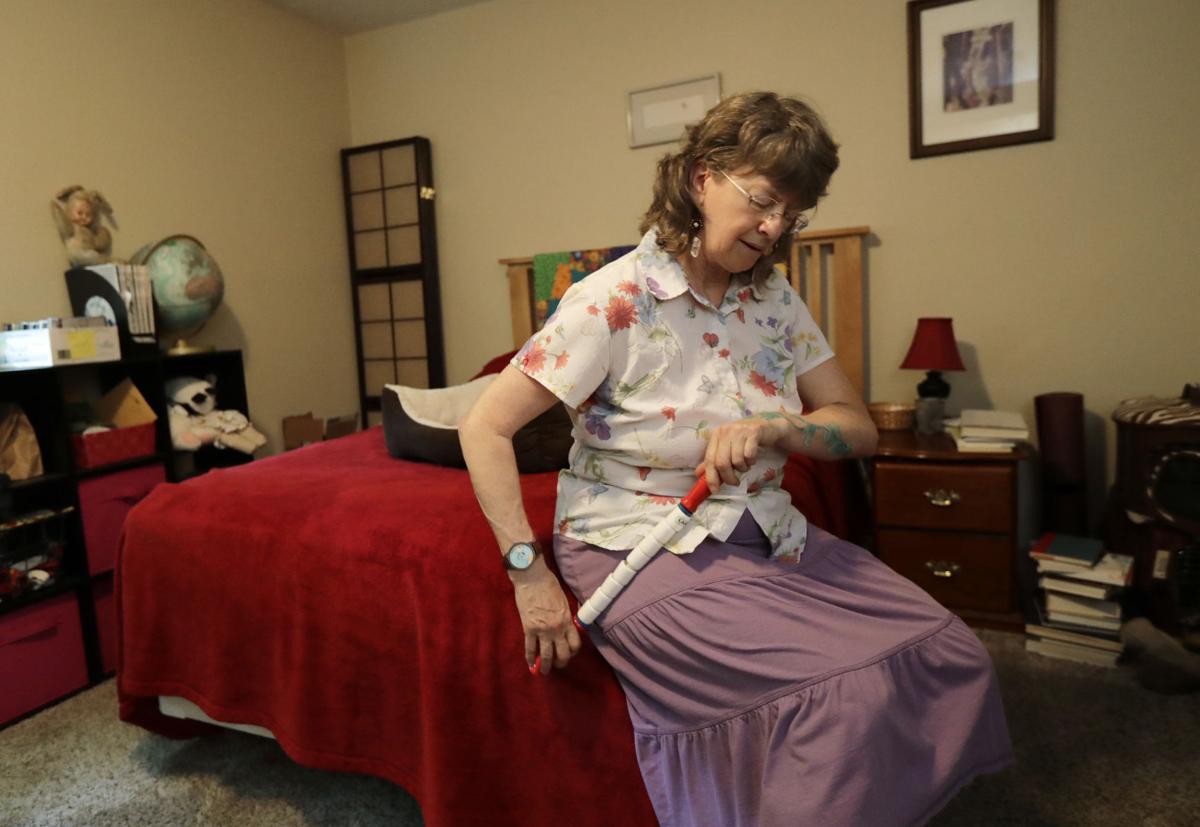 In this Aug. 22, 2018 photo, April Box uses a roller to work on her hip muscles at her home in Spokane, Wash. Millions of people covered under the Affordable Care Act will see only modest premium increases next year, and some will get a price cut. That’s the conclusion from an exclusive analysis of the besieged but resilient program that still divides voters heading into this year's midterm elections. (AP Photo/Ted S. Warren) 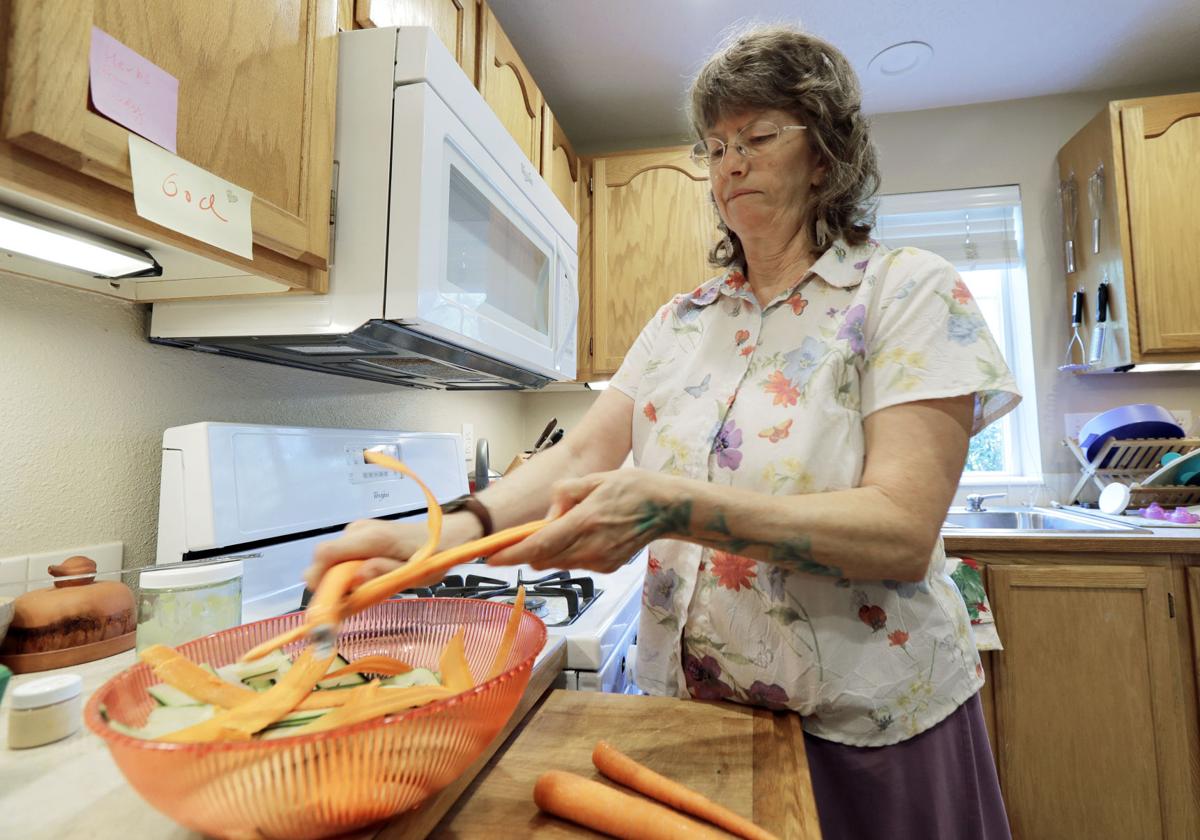 In this Aug. 22, 2018 photo, April Box prepares carrots and squash for dinner, at her home in Spokane, Wash. Millions of people covered under the Affordable Care Act will see only modest premium increases next year, and some will get a price cut. That’s the conclusion from an exclusive analysis of the besieged but resilient program that still divides voters heading into this year's midterm elections. (AP Photo/Ted S. Warren)