It is the highest-profile endorsement for the South Bend, Indiana mayor. Loebsack is one of three Iowa Democrats elected to federal office.

“Pete offers a new kind of leadership that we desperately need — he's a Midwestern mayor, a veteran, and is from a new generation,” Loebsack said in a news release from the Buttigieg campaign. “Iowans and our country face great challenges like climate change, increasing health care costs, and an economy that isn't working for the majority of Americans. They can't be solved with the same political warfare that is on display in Washington. Pete is the candidate that can heal our divides, restore decency to the presidency, and bring this country together.

“When I introduced Pete to a crowd of more than 1,000 Iowans in Mount Vernon in December, it was clear that his campaign is already inspiring a sense of hope and optimism. With Pete in the Oval Office, I believe our nation will unite and move forward together.”

Loebsack has announced his retirement from Congress at the end of this, his seventh two-year term. In 2016, Loebsack won in the 2nd District, which in that year’s presidential race went to Republican Donald Trump.

Watch where you park, Mason City: Alternate side ordinance is in effect

Odd days means odd side of the street, even means even; it's time to remember that. 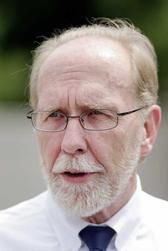