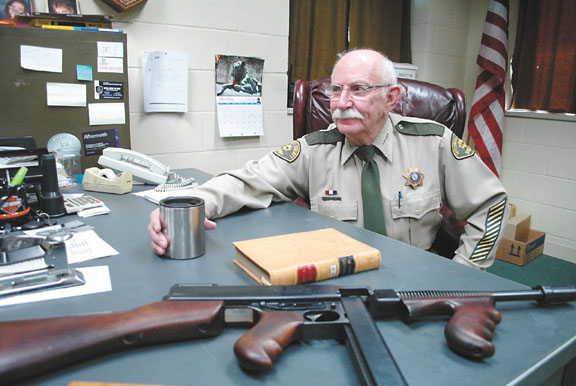 Mitchell County Sheriff Curt Younker enjoys a cup of coffee while reflecting on his many years in law enforcement. In the foreground is a 1928 Thompson submachine gun that was issued to the county during the prohibition era. It is just part of the memoribilia he has collected over the decades. 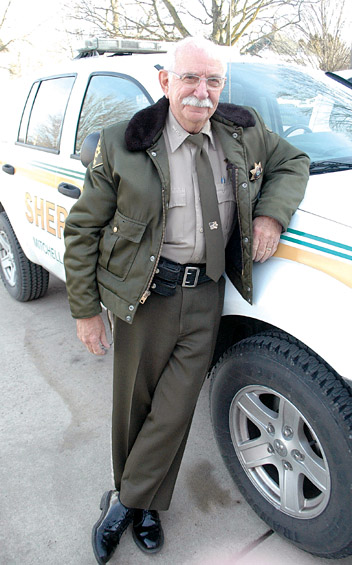 Mitchell County Sheriff Curt Younker will retire at the end of the year. 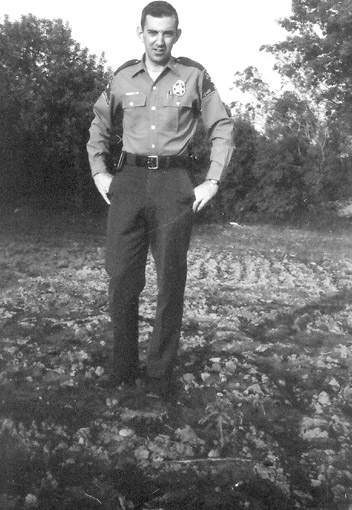 OSAGE — The first time Osage’s Curt Younker pinned on a badge was in 1962.

Fifty years later, the longtime Mitchell County sheriff will remove that golden star for the final time, as he retires at the end of the year.

Younker officially joined the department in 1964, starting his law enforcement career as a deputy to then-Sheriff Richard Jahnel, who was taking over the reigns from Sheriff Duke Angell at the time.

He has seen a lot since that time. Just a few of his memories include the crash of a small plane in 2005, when he pulled the pilot from the flames. For his efforts, he received The Sullivan Brothers Award of Valor from Iowa Gov. Tom Vilsack.

Younker was also instrumental in the approval design and construction of the new Mitchell County Jail and communications center, which replaced the former sheriff’s home and jail.

And, of course, he helped deal with a lot of bad guys along the way.

Undaunted by the dangers and tragic scenes he has witnessed over the years, Younker said he has kept a good sense of humor and always tries to look at the positive.

“An older, wiser sheriff once told me, ‘Curt, the real danger in law enforcement does not come from knives, bullets or car wrecks — the real danger comes from seeing too many things that are not good for you to see,’ ” Younker said. “I have found that to be true.”

His own first taste of law enforcement came in 1962, when he worked part time as a special deputy at the Mitchell County Fair; in 1964, Younker was hired as a full-time deputy by Jahnel.

“In those days I was not a deputy, I was the deputy — the only one,” said Younker.

He said being a law enforcement officer in the early 1960s was a lot different than it is today.

“A deputy nearly always worked alone and had to develop the ability to exercise independent judgment in a wide variety of situations,” said Younker. “Then, as now, an error in judgment would invariably land one in hot water.”

Younker said in the 1960s both the sheriff and the deputy owned their own patrol cars.

Along with transportation, Younker and Jahnel also had to buy their own uniforms, side arms and other related law enforcement equipment. The county furnished each officer with a shotgun.

When Younker was a deputy, Jahnel and his family lived in an apartment attached to the jail.

“On the rare occasions when Rich and his family would go on vacation, I would have to come in and sleep in his bed and run the jail until they returned,” Younker said.

There was also no ambulance service during the early 1960s.

“If someone was hurt so bad we couldn’t haul them in a patrol car, the funeral home would come out and take the injured to the hospital in a hearse,” Younker said. “A night nurse at the hospital used a two-way radio to talk to us if needed,” he said.

During the first few years of his career, things were pretty calm in local law enforcement for Younker, but that would soon change.

“The ’60s were a very exciting time to be a young deputy. Vietnam was going on and the whole country was in a state of turmoil,” said Younker. “The disrespect for law enforcement was widespread.”

The anti-war movement and social unrest of the late 1960s and early 1970s created a demand for increased local law enforcement. To meet this demand the federal government began funding programs that allowed cities and counties to hire and train additional officers.

Osage, St. Ansgar, Stacyville and Riceville each had their own justices of the peace, none of them trained in the law. Their job was to handle misdemeanor criminal cases and some civil cases.

Younker said if a defendant asked for a jury trial, “the justice of the peace would send me downtown to find six jurors.”

“I would usually go to a tavern on Main Street where there were always a bunch of old guys sitting around playing cards,” said Younker.

“They were always willing to serve because they knew they would get a couple of bucks for doing it.”

The justice of the peace system finally gave way to the magistrate court in the 1970s.

The job is far different today, but still special, Younker said. He is one of 22 sheriffs to have served Mitchell County.

Relics of the Mitchell County law enforcement history pepper his office — framed photos and newspaper clippings line the walls: “Murder at the David Hotel, 1898”; “Robbery at Aetna Savings Bank of McIntire,” in 1941; “Jail Break,” in 1966.

Younker pointed to an old police radio from 1950, sitting on top of the table. Next to that is a 1928 Thompson submachine gun, provided to Mitchell County during the Prohibition era of the early 1930s to battle potential gangsters.

“These pieces are important to keep. I can only imagine what it must’ve been like in the 1930s, with gangsters in the Midwest — Pretty Boy Floyd and Bonnie and Clyde,” he said.

“Lawmen had it tough. There were no radios and few lawmen.”

He is proud to have taken his place in that history.

“On balance, I think being sheriff is the best job in the world. I wouldn’t trade all I have experienced for anything,” Younker said.

David Namanny is the editor of the Mitchell County Press-News, another Lee Enterprises newspaper.

Three North Iowa residents were sent to the hospital with injuries after a coach bus struck a car in Clear Lake on Wednesday.

Mitchell County Sheriff Curt Younker enjoys a cup of coffee while reflecting on his many years in law enforcement. In the foreground is a 1928 Thompson submachine gun that was issued to the county during the prohibition era. It is just part of the memoribilia he has collected over the decades.

Mitchell County Sheriff Curt Younker will retire at the end of the year.