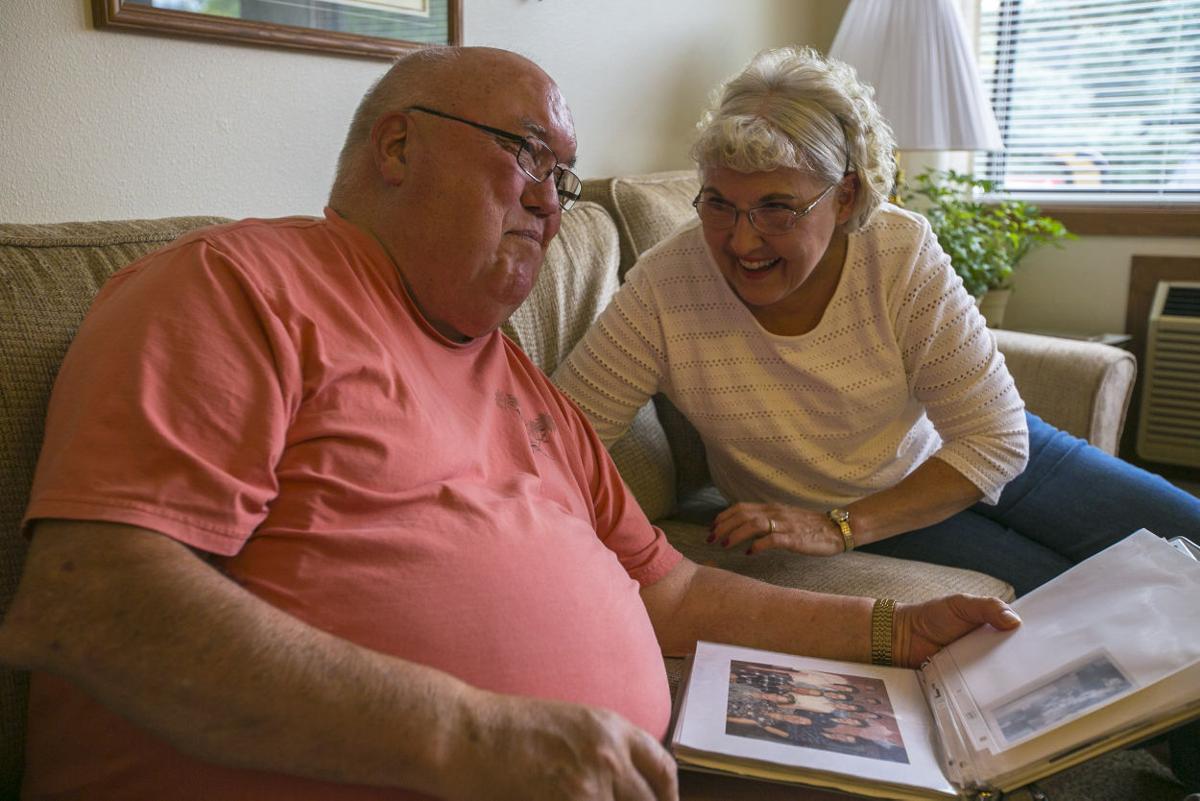 John DeVries of Thornton and his niece Barb Floy of Clear Lake share a memory as they look through pictures of his sister, Lucille DeVries, recently at his sister Alvina Muhlenbruch's apartment in Clear Lake. Lucille was found dead in the back seat of a burning car in Mason City nearly 53 years ago. 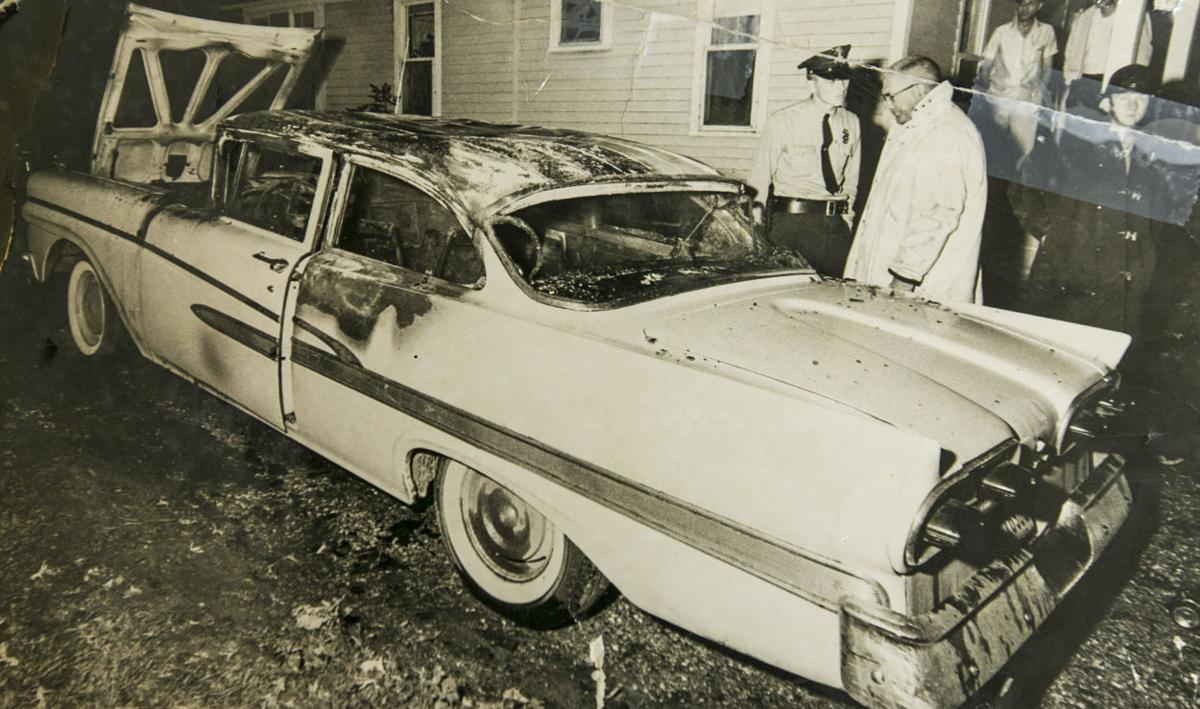 Investigators look at a car belonging to Lucille "Lucy" DeVries on Oct. 10, 1962. DeVries, 22, was found dead inside the burned-out car parked in fron of her home. Questions still surround her death. 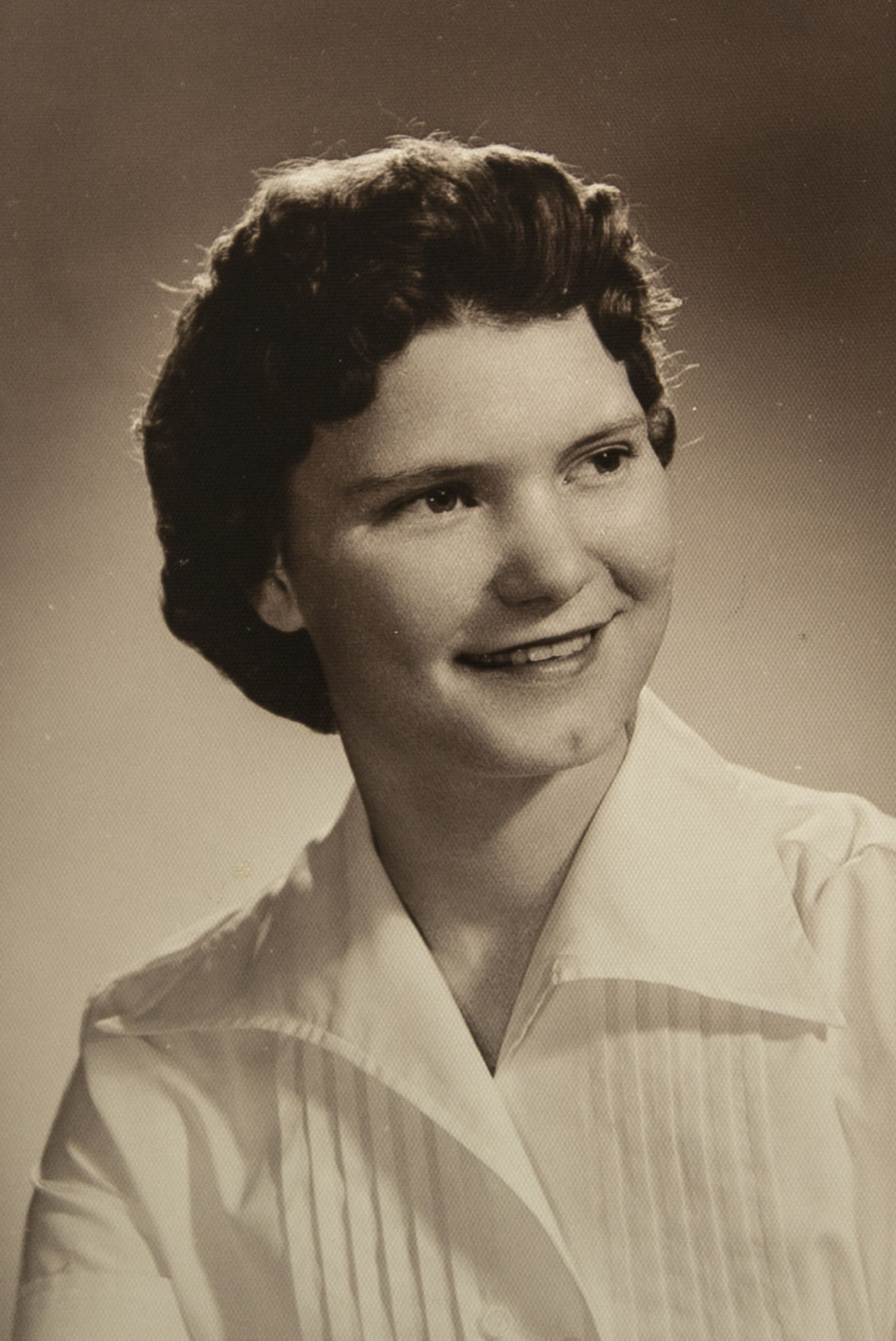 A photo of Lucille "Lucy" DeVries provided by family members. 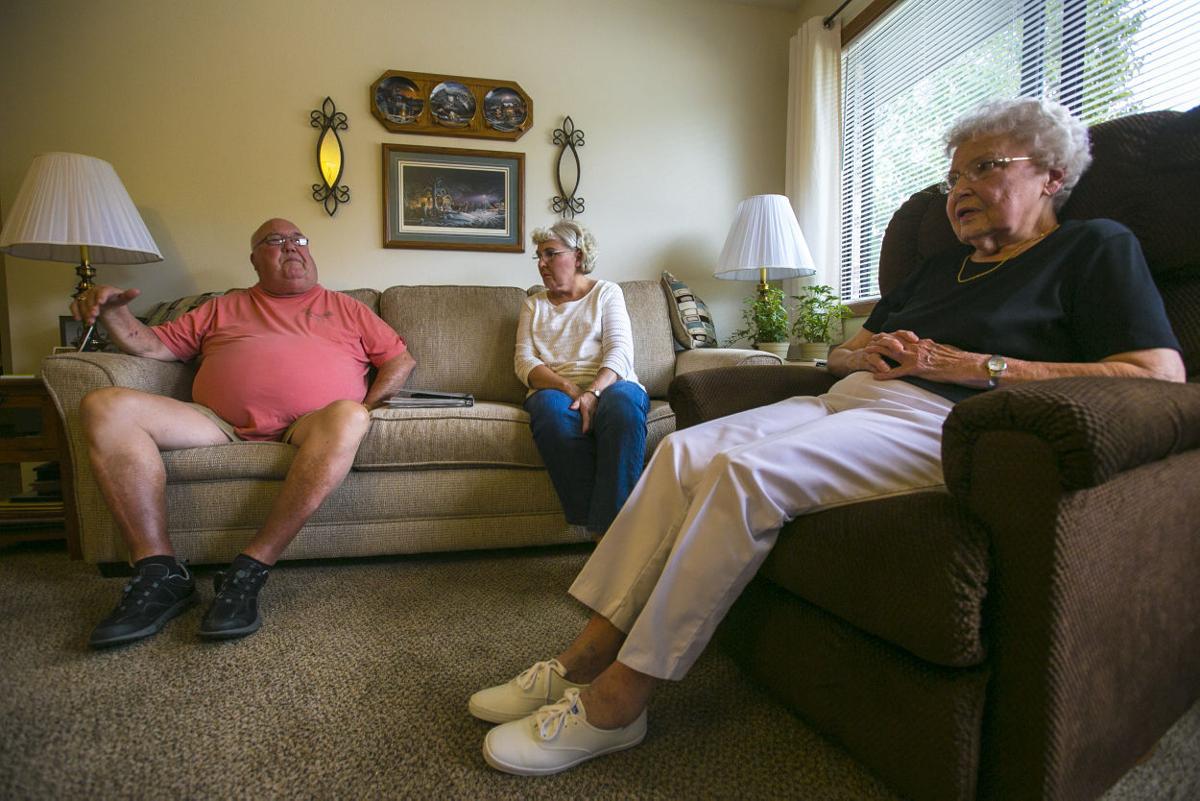 John DeVries, Barb Floy, center, and her mother, Alvina Muhlenbruch, retell the stories from when John and Alvina's sister Lucille was found dead in a burning car in Mason City nearly 53 years ago. While authorities ruled the death accidental, the case is still considered unsolved. 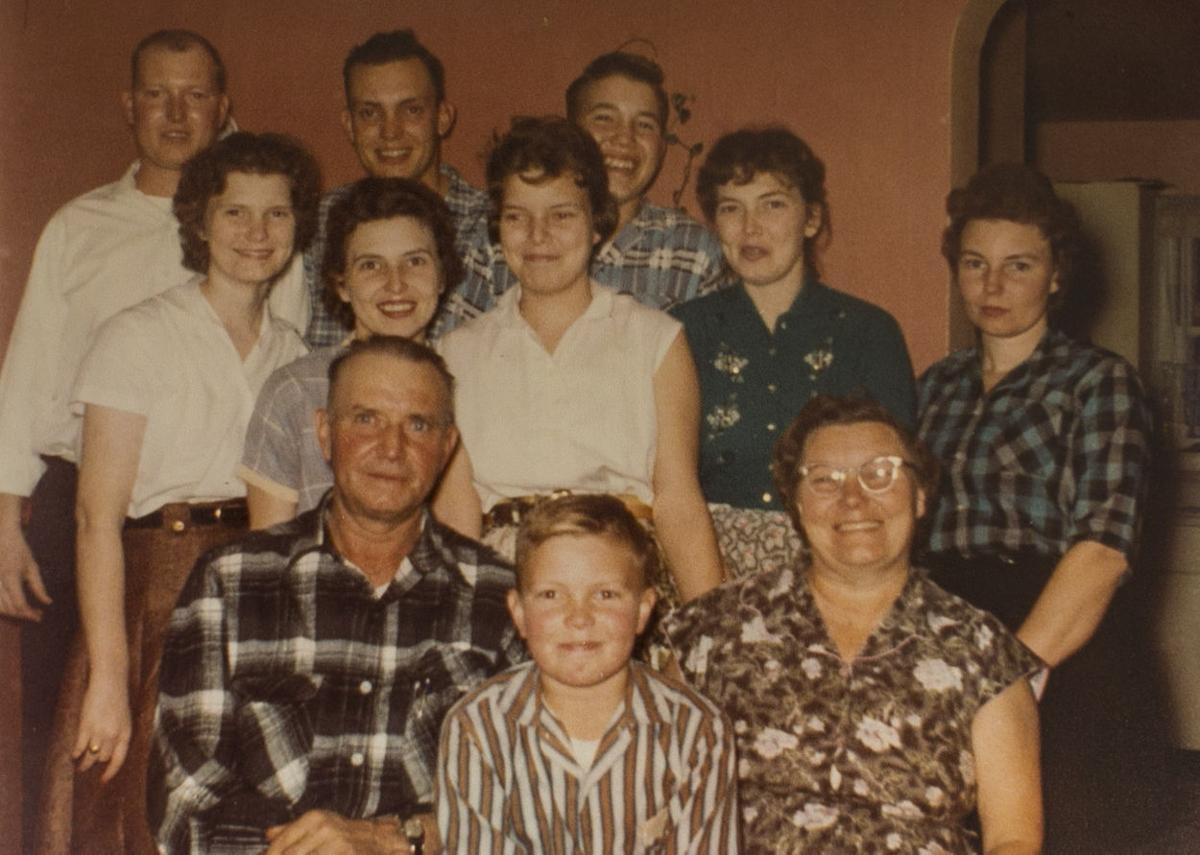 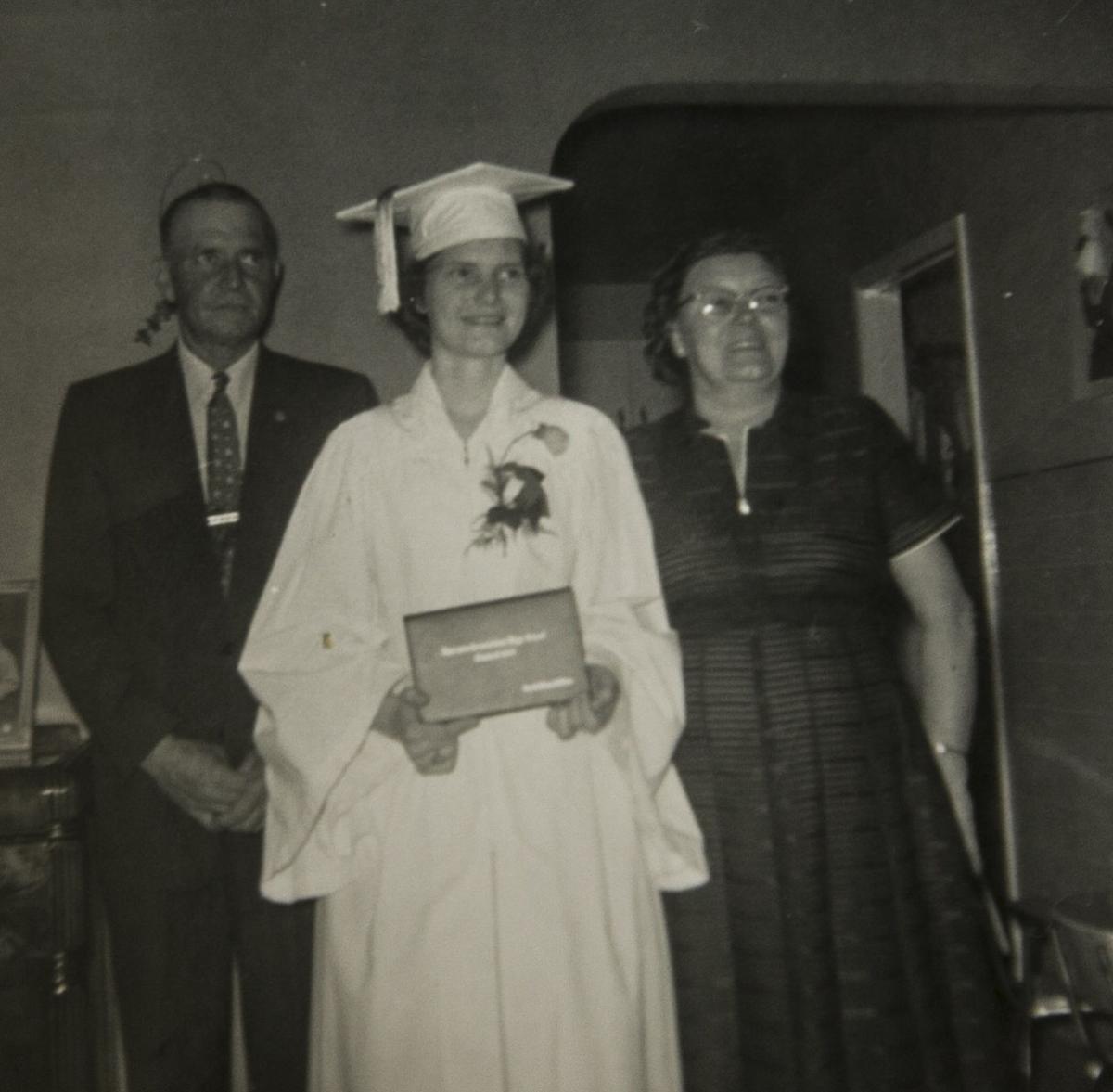 MASON CITY | Bob DeVries was 11 when the phone rang in the middle of the night at his family's Thornton farmhouse.

Nearly 53 years later, he still can still hear his mother picking up the phone.

"I remember Mom talking on the phone and then crying. ... After that, nobody was allowed to call our house after 9 at night," DeVries said.

Authorities ruled her death accidental shortly after the fire, but then continued to investigate it for months, seeking answers to how it happened.

"They never really came out and said it was a homicide, but there's obviously some things that were troubling about it," said Mason City Police Lt. Rich Jensen.

"I never thought for one minute that it was anything but foul play," said Alvina Muhlenbruch, Lucy's older sister. "It wasn't an accident."

Lucille "Lucy" DeVries was a farm girl. Her siblings say she was something of a tomboy, one of eight children growing up on the family farm a few miles outside Thornton.

DeVries went to a professional school in Omaha after graduation. She didn't stay long, returning to Mason City and taking a job with The Iowa Co., an insurance company.

"She was good in math — she was a smart cookie in school," Muhlenbruch said.

"She really was a good person even though she moonlighted at a bar," Bob DeVries said. "Today, you wouldn't think anything of it. Back then it was like you weren't a good person."

DeVries remained close to her family, often spending weekends at her parent's farm. She and her sister, Mary, often rode together back to the farm, stopping at Muhlenbruch's home in Swaledale to play games of 500.

"I would see her every week — every Saturday for sure," Muhlenbruch said. "And, I would do a lot of sewing for her that she needed done. She was just a busy person."

She had a soft spot for children, playing with Muhlenbruch's kids and taking time out for her little brother, Bob, who was still living on their parent's farm.

“She was a very unique, special person," said her brother, John DeVries, of Thornton. "I think everybody always got along with her that I ever knew. I never knew anyone that disliked her.”

"I think everyone liked her because of her honesty," said Muhlenbruch, of Clear Lake. "If she didn’t like you, she’d probably tell you.”

The fire was incredibly intense. A Globe Gazette article from Oct. 10, 1962, described the car's interior as burning to the springs.

DeVries was found in the back seat.

"When firemen arrived, the entire inside of the car was ablaze," the article states. "Heat had smashed out the closed car windows and caused the metal car roof to sag."

Her death was declared accidental the next day by Cerro Gordo County Medical Examiner Dr. J.E. Christopherson, who conducted an autopsy on DeVries.

Officials theorized DeVries may have accidentally started the fire with a cigarette, possibly being overcome when she went into the back seat to put out the flames.

They told the Globe Gazette that DeVries didn't have any injuries that weren't caused by the fire. She also didn't die of carbon monoxide poisoning.

Several people consented to lie-detector tests to confirm their version of events, although they couldn't be called suspects, authorities said.

Lucy DeVries' roomate and former Thornton classmate, Judy (Siskow) Keister, says she was one of those people.

Although Keister remembers thinking DeVries' death might have been an accident, she was so frightened she moved out of the house to go live with a cousin.

She still doesn't know what happened to her roommate.

"Absolutely not, because she was a nice person and I can't imagine her ever getting anybody angry or anything like that," said Keister, now living in Eagan, Minnesota.

Despite the accidental fire theory — which DeVries' family dismisses, although they say she did smoke — local officials, a state fire marshal and an agent from the Iowa Bureau of Criminal Investigation for months continued to investigate nagging questions about the scene.

Why was DeVries in the back seat of her own car? Firefighters found the car doors closed, but a witness told investigators he or she saw the dome light on and one of the doors open about 15 minutes earlier.

Firefighters had the interior of the car tested because they thought the flames spread too quickly for normal circumstances. There were indications a flammable liquid might be present, but the same substance could come from clothing or other materials.

Even though the scene presented questions, police said 1963 that DeVries didn't fit the profile of a murder victim.

She wasn't having problems with anyone and wasn't involved in anything that would make her a target.

Even her finances checked out.

"If it was a homicide, somebody's going to have to come forward and provide some information that can be corroborated," said Jensen, of the Mason City Police Department.

Still, family members have their suspicions.

While they say DeVries wasn't having any problems with anyone before she died, she also wasn't shy about sharing her opinions about some of the people in her life.

Those conversations led family members to believe they might know a scenario in which DeVries could have met with foul play.

When asked about the family's theory, Jensen said he couldn't comment.

He also wouldn't reveal if the department ever had a suspect, saying officers wouldn't release that type of information about any investigation, even cases from 53 years ago.

“In that case or any case, if there’re still investigative work to do, you don’t want to tip your hand to somebody out there that might be a suspect," he said.

No one has been arrested.

DeVries' death and the mystery surrounding it is a painful, never-ending loss for her family.

"We just know that someone got away with murder," said her older sister, Muhlenbruch. "You never stop thinking about it."

If you have information about the death of Lucille DeVries, call the Mason City Police Department at 641-421-3636.

See more photos and additional information on this cold case, and learn about other unsolved homicides at globegazette.com.

John DeVries of Thornton and his niece Barb Floy of Clear Lake share a memory as they look through pictures of his sister, Lucille DeVries, recently at his sister Alvina Muhlenbruch's apartment in Clear Lake. Lucille was found dead in the back seat of a burning car in Mason City nearly 53 years ago.

Investigators look at a car belonging to Lucille "Lucy" DeVries on Oct. 10, 1962. DeVries, 22, was found dead inside the burned-out car parked in fron of her home. Questions still surround her death.

A photo of Lucille "Lucy" DeVries provided by family members.

John DeVries, Barb Floy, center, and her mother, Alvina Muhlenbruch, retell the stories from when John and Alvina's sister Lucille was found dead in a burning car in Mason City nearly 53 years ago. While authorities ruled the death accidental, the case is still considered unsolved.