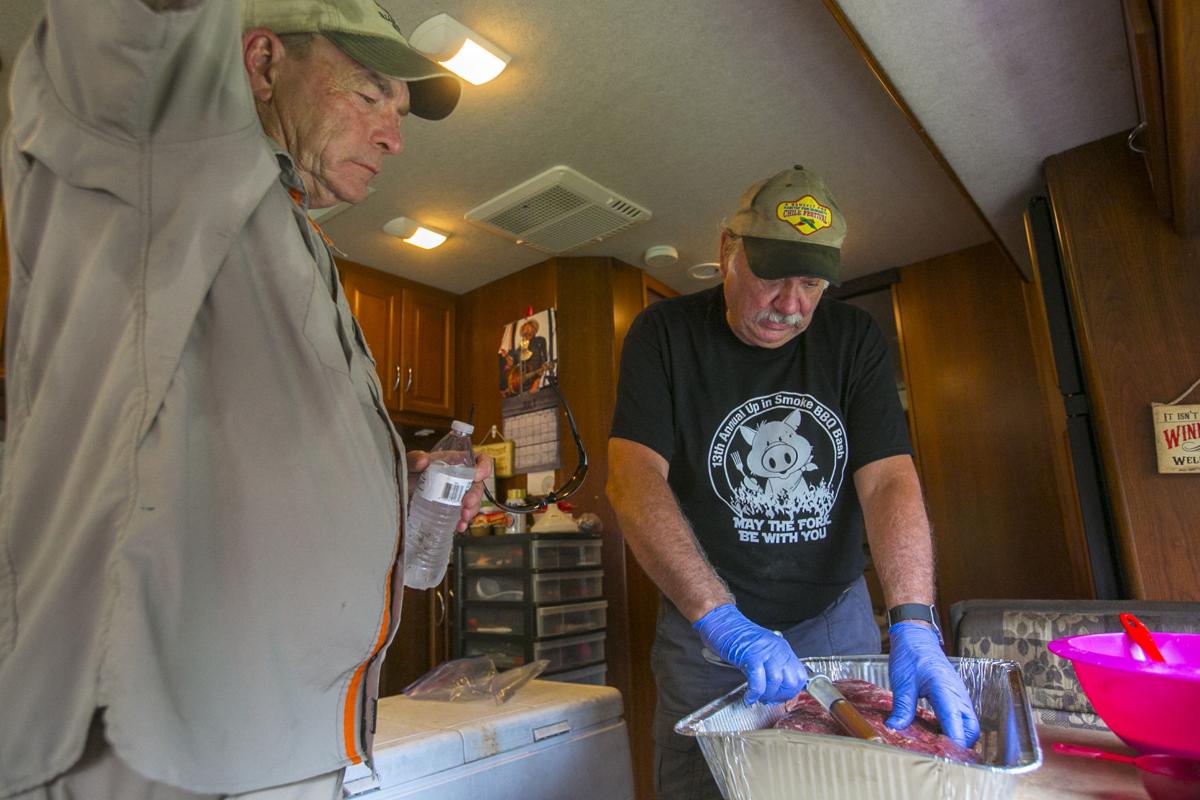 Doug Champlin injects his brisket as his cousin’s husband Jay Gerlich of Panora watches Champlin preps his meats for the Up in Smoke BBQ Bash competition Saturday at East Park in Mason City. 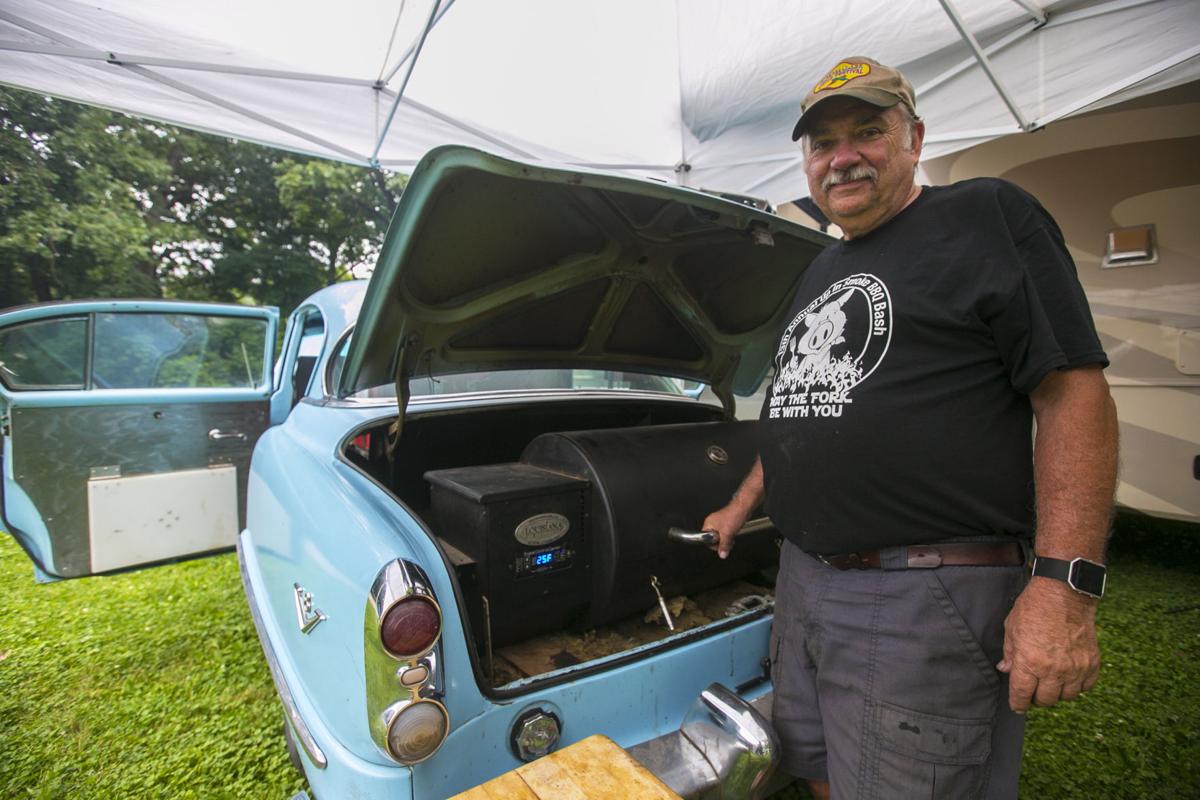 Doug Champlin stands next to his baby blue 1954 DeSoto turned barbecue smoker Friday as he preps for the Up in Smoke BBQ Bash at East Park in Mason City.

In the five years since he took up the sport, Judi Champlin considers it a much safer hobby for a man involved nearly nine years ago as part of a fatal balloon crash near Coulter.

For the Albuquerque couple, each return to North Iowa is a welcome and emotional chance to reunite with folks who embraced them when Doug became the lone survivor of that balloon crash in November 2007.

Champlin, a retired engineer for Intel Corp. in Albuquerque, was born in Mason City and lived in Clear Lake until he was 5.

His team — DJ’s Smokin’ BBQ, including his wife and daughter Tracy — will be completing for the first time this year in the Up In Smoke BBQ Bash competition in East Park.

En route on a flight from Greeley, Colorado, the helium balloon struck a power line near Coulter, severing the cables attached to the basket and plunging the gondola 60 to 65 feet to the ground.

“I do remember hearing very clearly the ping! ping! of the ropes snapping as they let go and the sudden rush of the basket falling, but I don’t remember the impact of the basket hitting or of me being bounced around,” he told the Globe Gazette in 2008.

Champlin broke his right femur in two places, fractured his left ankle, his left knee, left wrist and suffered multiple pelvic fractures. He also fractured some vertebrae in the accident.

“It’s just a miracle that anybody survived,” farmer Jon Korth said after the crash. He owned the field where the balloon crashed and rushed to the site.

“If those farmers weren’t down there working the fields and were able to get help to us right away, I’m not sure how long we would have laid out there,” Champlin said on Friday.

Judi spent Thanksgiving that year on the Korth’s farm. In the years since, Champlin and his wife have remained close to the Korths.

In the month after the crash, when Champlin was hospitalized at Mercy Medical Center-North Iowa, the outpouring from the community was “overwhelming,” said Judi.

That Christmas, she and her daughter bought him Superman pajamas to mark his survival.

After a long rehabilitation, Doug went up again in a hot air balloon in June 2008.

The couple decided to redecorate their Albuquerque home and repainted some walls turquoise.

“We decided since Doug lived that we were going to completely change our lives,” she said while thumbing through a scrapbook detailing his recovery. “Our walls went really bright and we redid the whole house.”

“We thought, ‘Well, we’ve got a new lease on life, so we’ll just make things brighter.’”

In 2011, Champlin sold his hot air balloon and began to take classes on barbecuing.

About two years ago, he decided to convert his late father-in-law’s 1954 DeSoto to carry multiple smokers in the vehicle.

He was inspired after his wife watched an episode of “Bubba-Q” on the Food Network featuring a car that had been set up to carry multiple smokers to do the same.

He estimates he’s spent $35,000 converting it for barbecue, where he smokes brisket and ribs from the trunk and smaller pieces in a smoker sitting in the back seat.

“During rain or wind I can close the doors and it doesn’t affect the smokers at all,” he said.

It’s a fun hobby where they can travel to 15 to 20 competitions per year while socializing on the circuit.

Collected here are just a handful of the hundreds of responses we received, as well as video and photos we took at the demonstration Sunday evening.

Who are the people in Central Park protesting for George Floyd?

Protesters lined North Washington Avenue on Monday afternoon to rally and stand up for racial injustice after the death of George Floyd.

Doug Champlin injects his brisket as his cousin’s husband Jay Gerlich of Panora watches Champlin preps his meats for the Up in Smoke BBQ Bash competition Saturday at East Park in Mason City.

Doug Champlin stands next to his baby blue 1954 DeSoto turned barbecue smoker Friday as he preps for the Up in Smoke BBQ Bash at East Park in Mason City.