Watching cranes forage on their home turf is an amazing opportunity. With its penetrating stare, ear piercing call, six-foot wingspan, and four-foot height; the crimson-capped sandhill crane is about as impressive as a wild bird can get. Credited with having the loudest voice of any bird species, the crane’s rolling elephant-like trumpeting can be heard for miles. During spring courtship, crane pairs conduct charismatic rituals in which birds engage in flamboyant unison calling, simultaneous bowing, and elaborate wing extensions before executing a perfectly synchronized, dramatically choreographed nuptial dance. Extremely wary, nesting adults stay as far from humans as possible. Their nest sites and newly hatched young are rarely observed.

Wild cranes were once common inhabitants of Iowa bogs and marshlands. During the 1800s, crane flocks containing hundreds, and even thousands of birds, were reported in northern Iowa’s Winnebago and Hancock counties. But times change. Following the arrival of European settlers, crane numbers began to dwindle rapidly. Relentlessly hunted for food and feathers, pressured by wholesale wetland drainage, and eventually plagued by the growing popularity of wild bird egg collections; crane populations crashed and then disappeared entirely by around 1900. The state’s last known nesting of sandhill cranes occurred in May of 1894 on a marsh located near Hancock County’s Eagle Lake. This final nesting attempt was unsuccessful when egg collectors looted the nest.

At another nearby marsh, the last breeding pair of Iowa whooping cranes was also setting on eggs. By now, both crane species had become exceedingly rare and serious collectors were paying a premium for their eggs or skins. Consequently, and in a remarkably callous display of short-sighted greed, the female whooper was shot while sitting on the nest; her hide and eggs promptly collected. Although the male was pursued at length, the bird eluded capture and was finally driven from the area.

The shameful incident marked the very last time that a pair of whooping cranes attempted to nest anywhere in the continental United States. Today, the only self-sustaining population of whooping cranes breeds in northern Canada and winters in Texas. Biologists, mainly as a result of captive breeding projects, are currently attempting to re-establish three whooper populations in the Lower ’48. The closest attempt is in Wisconsin.

Faring somewhat better than their larger cousins, a fragile mid-continent population of sandhill cranes managed to survive within the undeveloped reaches of Wisconsin, Minnesota and Michigan. These birds have shown significant gains during recent years and are currently expanding their Midwestern range. In 1992, breeding sandhill cranes returned to Iowa when two successful nests were documented at Tama County’s Otter Creek Wildlife Area.

There was more history in the making when, following an absence of more than a century, wild sandhill cranes officially returned to Cerro Gordo County in 2010 when a single crane colt emerged from a nest located in a remote section of the 992-acre Ventura Marsh.

Continuing to expand their range and reclaim historic habitats, wild cranes are now nesting in more than 35 Iowa counties; mostly in the eastern half of the state. Most Iowa cranes migrate to Florida during winter. 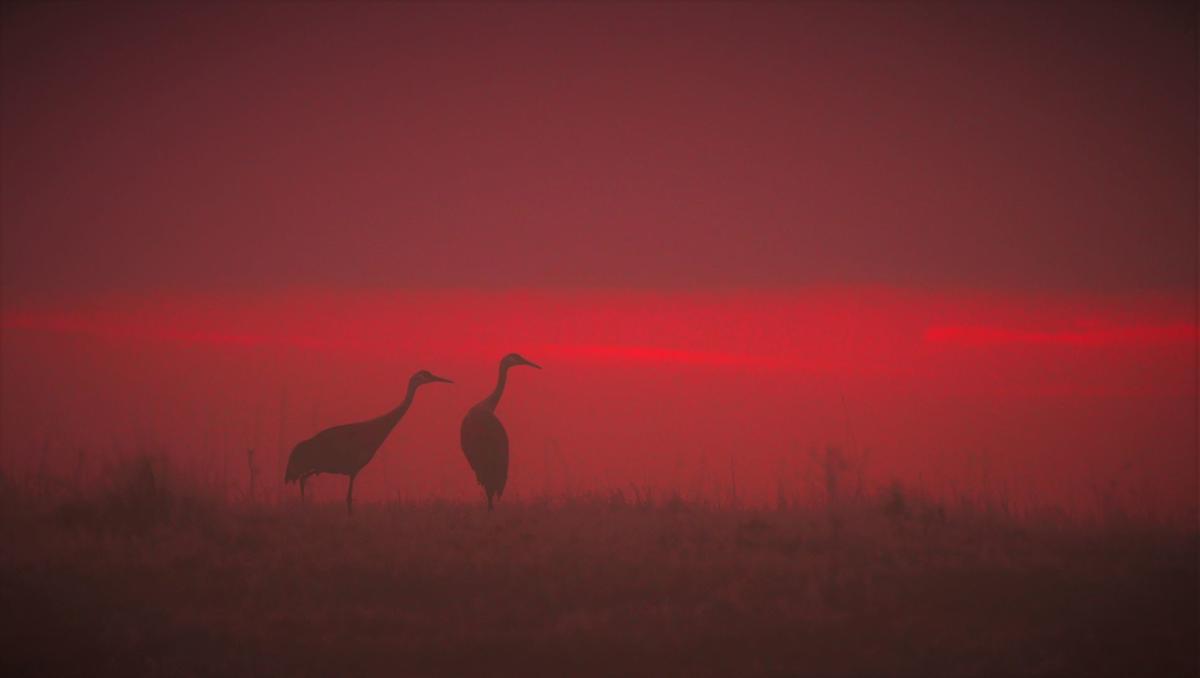 A pair of sandhill cranes greet the sunrise from a hilltop near Clear Lake’s Miller’s Bay Marsh. 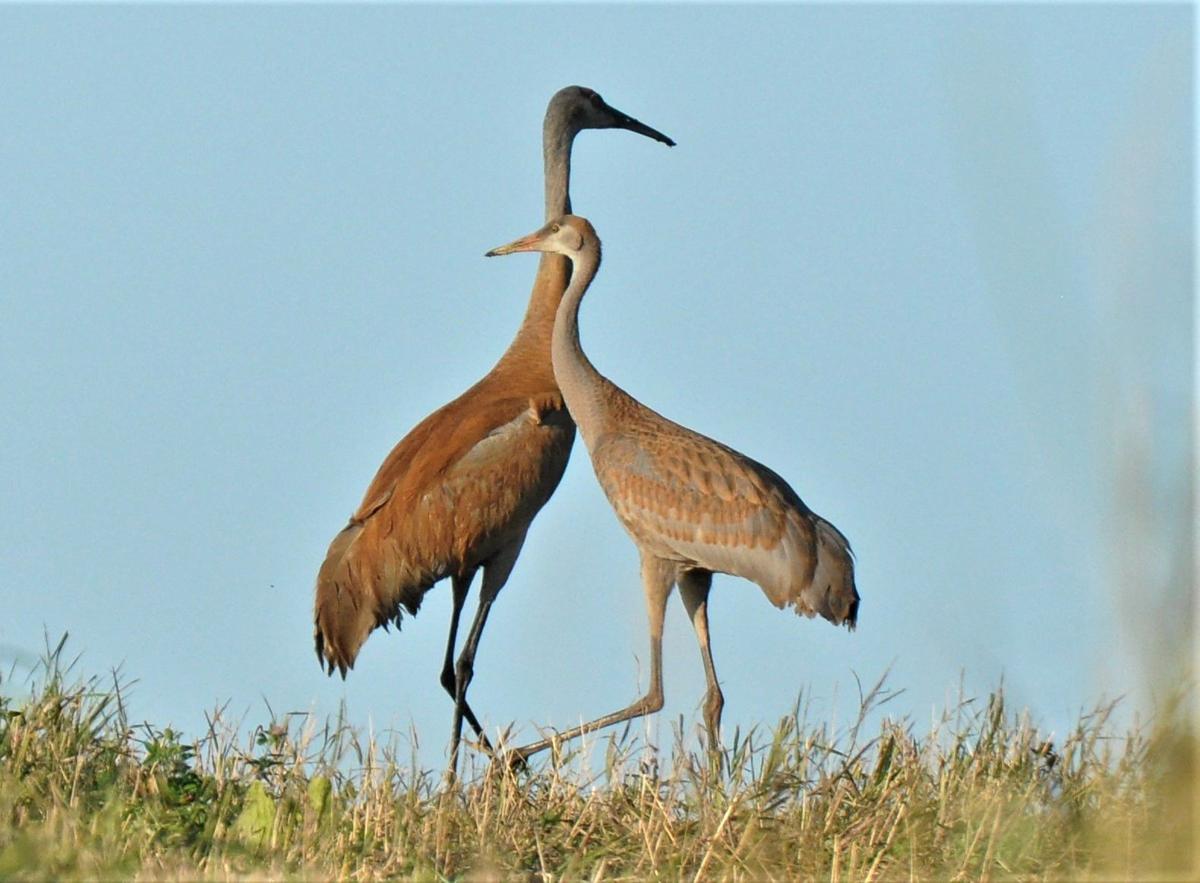 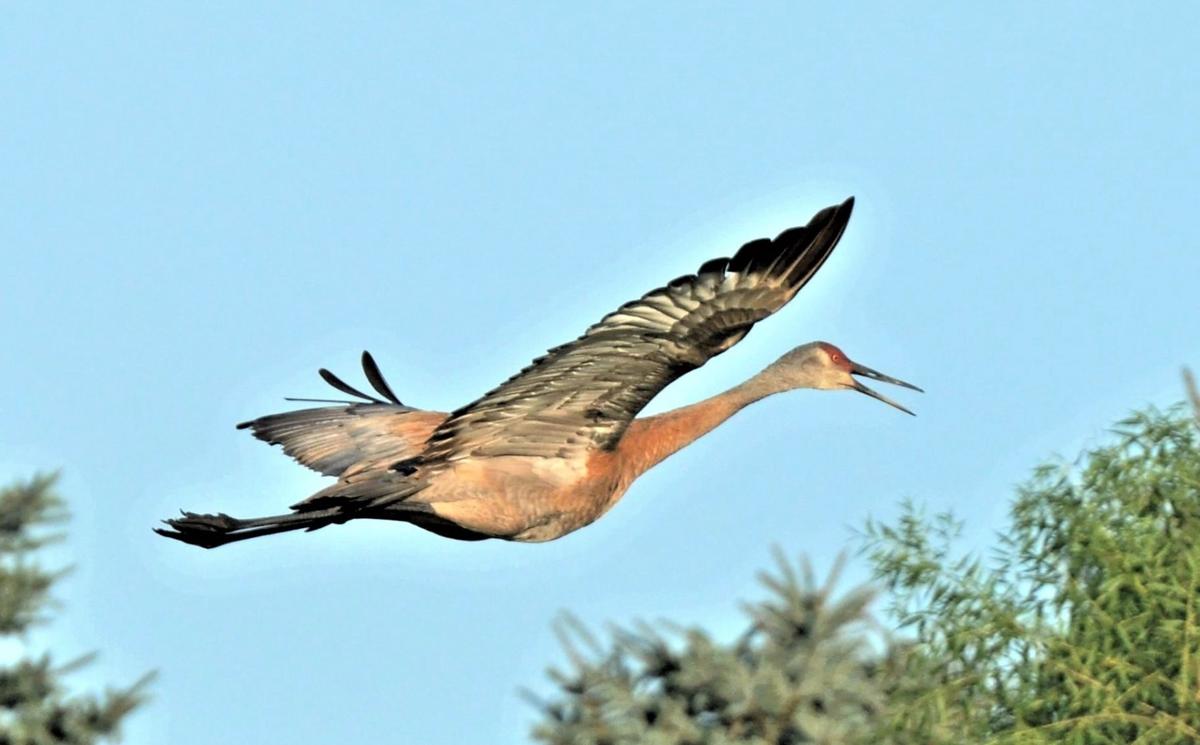 Attracted by abundant frog populations, an adult sandhill crane announces its arrival at a wetland on the Bennett Smith farm located south of Clear Lake’s Camp Tanglefoot. Cranes are credited with having the loudest voice of any bird.