The annual migration of northbound snow geese is one of creation’s most awe-inspiring events. Moving toward ancestral breeding grounds in arctic Canada, snow goose flocks are currently winging their way across Iowa.

Pushing the edge of a retreating winter, peak migrations usually occur in Northern Iowa around mid-March. But spring weather may prove fickle and migrating birds are sometimes forced to make a U-turn as sudden snowstorms force a temporary retreat. In 2015, blizzard-like conditions caused geese to move south again; with some birds backtracking all the way to northern Arkansas.

Of all the waterfowl that migrate through Iowa each year, no species has undergone a more dramatic change in behavior than the snow goose. When I began hunting here in 1959, snow geese were an important game species. Arriving in Northern Iowa around Oct. 20, snow geese of the 1960s and 1970s were very different from today’s birds. Tame and naïve, geese usually traveled in small bands of 10 to 30 birds. Serious goose hunters rarely used more than one or two dozen decoys back then, and migrating flocks came to those spreads like cats to catnip. Even after being shot at, these fresh-from-Canada migrators could sometimes be called right back into the decoys.

Somewhere along the line, things changed; and they changed in a big way. Snow geese began congregating in larger and larger groups. Staging areas now contained thousands – even tens of thousands -- of birds. Finding safety in numbers, snow geese began living for a decade or more. Survivors of multiple migrations, modern-day snow geese have become the wariest birds in the sky. Successfully hunting these flyway veterans currently presents the ultimate waterfowling challenge.

Spring snow goose hunts are not for the faint of heart. Instead of one or two dozen effigies, today’s hunters routinely place hundreds, and often thousands, of decoys. It’s back breaking work and the rewards are often few and far between as flock after flock of highly educated geese snub the spread. It’s nothing out of the ordinary for groups of hunters to begin setting hundreds of decoys during the wee hours of darkness, stay in those decoys all day, watch as thousands of migrating snow geese inspect but shun the spread, and finally leave the field empty handed.

But of course, there are days when things take an unexpected turn for the better – sometimes for no apparent reason. For me, one of the most memorable of these events struck without warning on Saint Patrick’s Day.

After not seeing a single goose until mid-morning, I finally spotted a gnat-like swarm of birds two or three miles distant. Grabbing the binoculars, I quickly determined the swarm to be a flock of about 150 snow geese. Even though the geese were miles away, they already appeared to be locked on to the spread of white windsocks surrounding my hilltop position. The geese kept coming and nearing the decoys, simultaneously set their wings. Although I knew the geese would probably pull up again before coming into range, I would gladly enjoy show while it lasted.

The geese stayed their course and instead of flaring, began to lower their pink-webbed landing gear. I let them keep coming until the flock’s leaders began landing around me. The closest birds were standing within mere feet and the sky overhead was filled with descending geese. Their high-pitched yelping was deafening.

Making the most of this rare opportunity, I shouldered the gun and fired. To my amazement, three geese fell from the flock and I managed to down two more as the birds retreated. Minutes later, another large flock appeared in the distance. Incredibly, these birds also came directly into the decoys without so much as a single precautionary swing. Sitting up, I was able to kill three more. As the flight continued, more geese were added to the bag.

The best part of it all was that virtually all shots were taken on decoying geese at a distance of less than twenty yards. The day proved to be one of the most exciting hunts of my life.

The following sunrise found me lying in the same decoys under the exact same conditions. The snow goose migration continued, but it was back to business as usual as flock after flock only came down to within 40 yards or so before lifting up and continuing their journey. Although I conservatively estimated that more than 2,000 geese had warily inspected the decoys, I never fired a single shot the entire day.

That’s often how it is with modern-day snow geese. The Good ‘Ole Days of naïve dumber-than-a-rock migrators are long gone. Repeatedly migrating from one end of the continent to the other, the geese have become smarter than the people who hunt them. Ouch!

Catch up on the news you might have missed:

Iowa has added another 15 positive cases of novel coronavirus, bringing the total to 105, according to officials with the state Department of Public Health.

Washburn: For those who haven't heard the tale of the Strawberry Blond 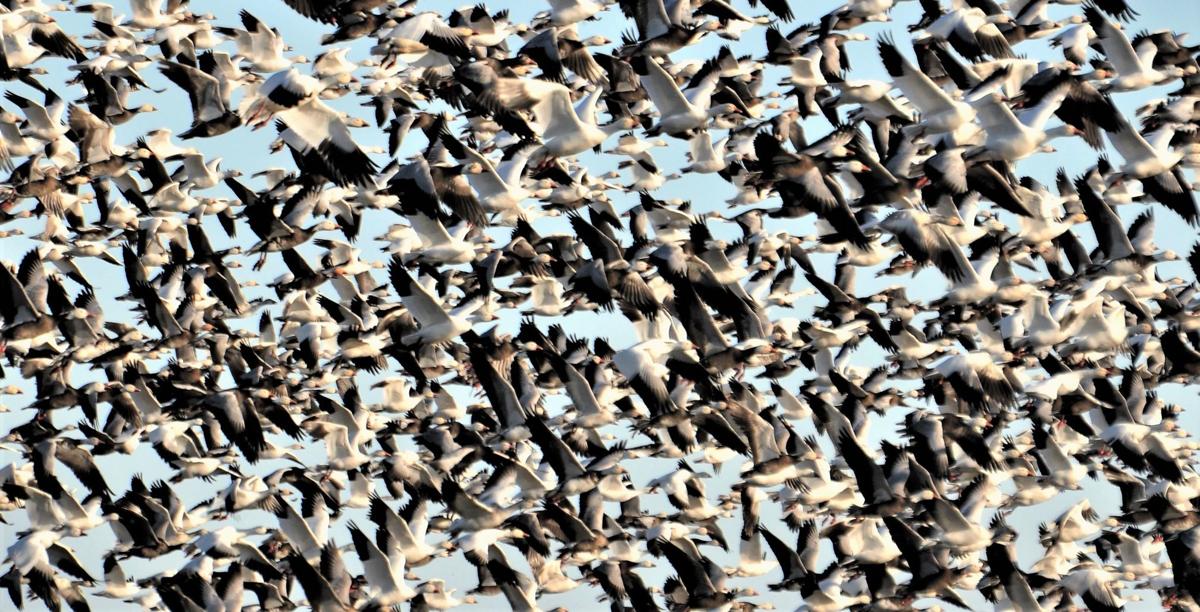 A flock of migrating snow geese invades north central Iowa. Millions of the birds are headed toward ancestral nesting grounds in the Canadian arctic.

After refueling on waste grain near Ventura, a flock of migrating snow geese takes to the air.