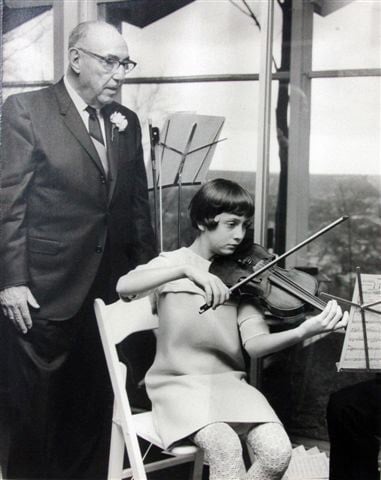 Caren Simon Umbarger practices her violin under the watchful eye of her grandfather, Frank Simon. (Photo courtesy of Caren Umbarger) 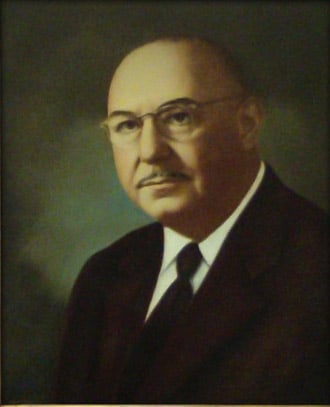 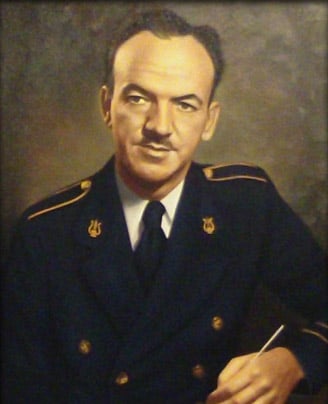 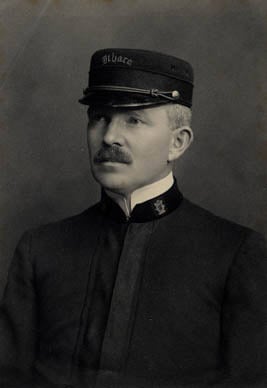 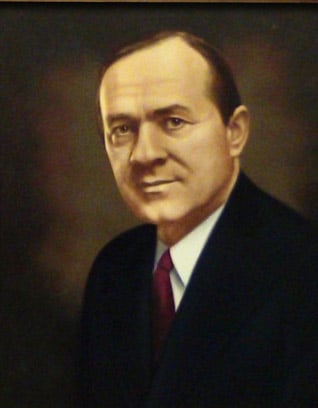 “ ... Ta-ta-ta! And you’ll feel something akin to the electric thrill I once enjoyed when Gilmore, Liberati, Pat Conway, The Great Creatore, W.C. Handy — and John Philip Sousa! — all came to town on the very same historic day!”

Fans of Meredith Willson’s “The Music Man” will recognize this reference — it is the introduction to one of the musical’s most popular songs: “Seventy-six Trombones.”

Prof. Harold Hill reaches out to a gathering crowd, excitedly recalling those impresarios and band leaders who touched their audiences with the magic of music.

As we know, Hill wasn’t a musician himself — that fact plays at the heart of the plot — but what remains is his intense love of the music.

“I always think there’s a band, kid,” he says to Winthrop Paroo.

Fortunately for Mason City, there were music men who could play quite well, thank you.

Willson, of course, was one; Carleton Stewart, the Mason City High School band and municipal band director who helped establish the North Iowa Band Festival, was another.

There were influences that elevated both.

Ohio musician Frank Simon’s impact was huge. While the name rings few bells today, Simon was an internationally known musician who was a featured cornetist and assistant director for famed bandmaster John Philip Sousa. Later he formed his own ARMCO Band.

Bandleaders were considered the superstars of their day. It was the golden age of bands, when there was no TV, movies were still speechless and radio had yet to populate the country.

Willson was brought into the Sousa fold as a piccolo player under the auspices of Simon, who was in Mason City in 1920, when the Sousa band played at the Mason City Armory.

Harry Keeler, vice president of the Mason City Brick and Tile Co., who formed a municipal band, enticed Simon, from Cincinnati, to return in the summer to serve as guest cornetist for the Mason City band, while the Sousa band was on a summer hiatus. Simon agreed.

Simon definitely found more than he bargained for in Mason City.

The first was discovering Willson.

“Three weeks into his stay, Frank received an invitation to a special meeting at the Country Club. The Kiwanis, Rotary and the Lions were presenting a band concert featuring local soloists.

“One of the soloists was a young man named Meredith Willson, who played the flute so beautifully that Frank approached him afterward and asked him if he would like to ‘go with Mr. Sousa.’

“Meredith, who had never been out of Mason City, told Frank that he would ‘give his right arm’ if he could get in.

“After an exchange of letters between Frank and Sousa, Meredith was hired, sight-unseen by Sousa, and a contract was drawn up for the next season. One of Frank’s greatest qualities was the fostering of young musicians.”

Willson played piccolo for Sousa and later played flute under Arturo Toscanini as a member of the New York Philharmonic.

But Simon got even more that summer — a wife.

Umbarger said Simon “was sitting on the veranda of his hotel ... when two of the Wolf brothers, Louis and George, son of furniture merchant Mier Wolf, drove up in their Stutz Bearcat.”

“They had been encouraged to introduce themselves to Frank via the proprietor of the Globe Gazette, Mr. McKay, whom Frank had met earlier.

“The three hit it off and the Wolfs decided to take Frank to Clear Lake and show him a good time,” Umbarger said. “There were two young women renting a cottage there, one of whom caught Frank’s attention. He was introduced to Mary Chapman ... and before three days was up, he had proposed marriage to her.

“She didn’t accept immediately, but she did, indeed, eventually become my grandmother.”

Frank and Mary had two sons, David and Joseph. And Louis Wolf and his wife had three children who grew up in Mason City, Richard, Rosalyn and Joanne. Umbarger is the daughter of Joseph Simon, son of Frank and Mary; and Rosalyn Wolf, daughter of Louis and Bernice Wolf.

“Of Frank’s seven grandchildren, I am the only one who went on to become a professional musician, as well as a conductor,” Caren Umbarger added. Umbarger, who lives in St. Augustine, Fla., is the artistic director of a youth orchestra program.

Simon’s influence on Carleton Stewart is less clear, but we know when Stewart first came to town, a Globe Gazette article said he had studied under Simon while still a youngster.

When Stewart, the son of a Clarion High School band director, was 7, he attended summer classes at the Warren Military Band School in Warren, Ohio, working under B. D. Gilliland, a cornetist with Sousa and later with Edward Llewlyn, a cornetist and trumpeter with the Chicago Symphony.

Rivaling Sousa was cornetist and bandleader Pat Conway, who established the Conway Military Band School, which later became part of Ithaca Conservatory, under the direction of another noted cornetist, E.S. Williams. Stewart spent four years of college there and was a student director before embarking on his own career.

In some ways, Stewart may have been most influenced by Conway, who was as much loved for his teaching of bandmasters as for the bands themselves. He also led the Cornell University Band, was a guest conductor and adjudicator. Some historians argue that Conway’s bands were as popular as Sousa’s.

Sousa, Conway, Simon, Williams and Stewart were among about 60 named to the Distinguished Conductors Hall of Fame of the National Band Association, the largest band organization in the world.

The Mason City Police Department has released more information about the Saturday night shooting on the northwest side.

Police respond to apparent shooting on Northwest side

Mason City police were on the scene of an apparent shooting around 10:30 p.m. near West Park and Parkers Woods on Saturday night.

Caren Simon Umbarger practices her violin under the watchful eye of her grandfather, Frank Simon. (Photo courtesy of Caren Umbarger)