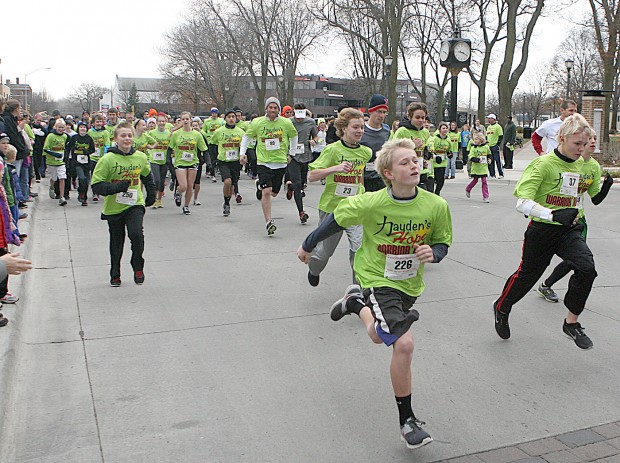 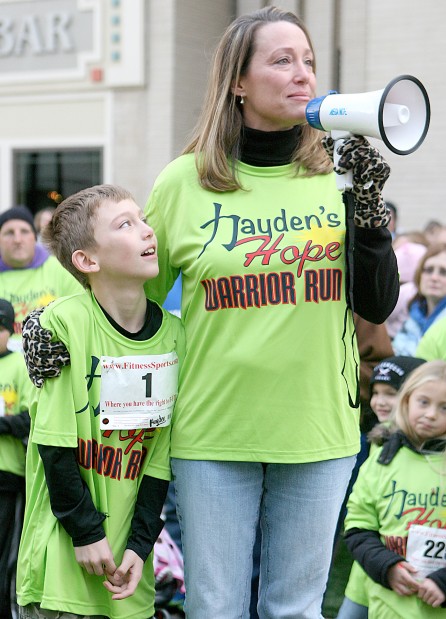 Sarah Despenas and her son Hayden thank the crowd for their support Saturday before the "Hayden's Hope Warrior Runs" in downtown Mason City. The 5K and 10K runs were planned to raise awareness of Friedreich's Ataxia and raise funds for research supported by the MDA and Friedreich's Ataxia Research Alliance, as well as to help Hayden participate in clinical trials.

MASON CITY — Hundreds of people turned out Saturday for “Hayden’s Hope,” an event to raise funds to find a cure for Friedreich’s Ataxia and for treatment for a 9-year-old Mason City boy who has it.

Hayden Despenas, son of Sara and Dana Despenas, has been diagnosed with the rare genetic neurodegenerative disease. Funds raised Saturday will be given for research and to help Hayden participate in clinical trials that could have a profound impact on the progression of the disease.

“It’s amazing,” said Rosanne Pals, a volunteer at the event that included live and silent auctions, live band, children’s carnival in Central Park, bake sale on the Plaza and food vendors, in addition to sprints for children 12 and under and 10K and 5K runs for adults.

Medals were given to top runners and to all sprint participants. An estimated 300 runners participated.

“I am just overwhelmed,” she said.

The event started out small and grew as more and more people came forward to help, Despenas said.

Items ranging from furniture to sports memorabilia were being sold at a silent auction that filled the Ballroom of the Historic Park Inn.

“The Historic Park Inn donated the Ballroom to us,” Despenas said.

All the Mason City public schools contributed gift baskets for the auction, and many gave more than one, said Despenas, a Mason City school guidance counselor.

Food was donated by Hardee’s Restaurant and by Gene and Diane Julius.

Members of the Bolder Band, of Mason City, and The Sliders, of Forest City, performed live music on Federal Avenue.

“The generosity of people is truly incredible,” Despenas said. “We’re touched and blessed.”

Hayden had already chosen an item in the silent auction that he really wanted to get — a Mason City Mohawk theme gift basket by John Adams Middle School.

He said the event was “to raise money for kids who have Friedreich’s Ataxia and make medicine for them to get better.”

His mother said it gives Hayden’s family a way that they can help.

“You just feel so powerless,” she said. “This was a way for us to do something and to empower Hayden.”

Only about 5,000 people in the United States have Friedreich’s Ataxia and only 15,000 worldwide, Despenas said.

The event at NIACC was meant to honor 10 local "fighters" who did their best to battle back against the virus and treat patients over the past year.

Sarah Despenas and her son Hayden thank the crowd for their support Saturday before the "Hayden's Hope Warrior Runs" in downtown Mason City. The 5K and 10K runs were planned to raise awareness of Friedreich's Ataxia and raise funds for research supported by the MDA and Friedreich's Ataxia Research Alliance, as well as to help Hayden participate in clinical trials.