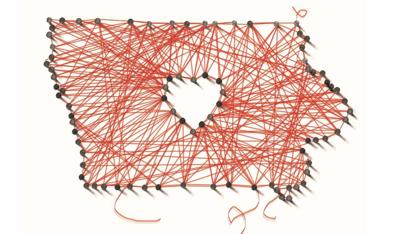 More than 1,300 Iowans have died from the coronavirus. Each of them was a friend and a neighbor. Each of them left a mark on their families and their communities. Each of them deserves to be remembered as more than a number.

In an unprecedented partnership, nine Iowa newsrooms across two companies have come together to lift up these Iowans’ stories.

Here are those stories.

Don Wachal loved stock car racing. But there was one rule the long-time owner of Davenport's Filling Station had to follow.

When Mary Ann Otte and her husband moved to Davenport in 1948 for his job as an accountant, they joined St. Paul Catholic Church.

Iowa Mourns: Rogers lived by a code to give to others

Generations of Illowa Council Boy Scouts knew him as the Kitchen King. Or the Grub Master. He was a John Wayne-quoting legend.

She was 72 years old when she learned to drive.

When remembering their mother and grandmother, Dorothy Etzen's devotion to her family comes to the minds of loved ones.

When Rich Morrison took his girlfriend, Rose, to meet his mother at Ridgecrest Village in Davenport, the two didn’t know what to expect.

The type of guy that just really made you feel good when you were around him.

SIOUX CITY -- Last fall, Siouxland Soup Kitchen Manager Danielle Tott was looking for volunteers to spend 24 hours with her living on the streets of Sioux City in effort to raise awareness about homelessness.

SIOUX CITY -- Even though Hong Cuc Thi Nguyen's health had been fragile for some time, her hospital stays always generated notice.

SIOUX CITY -- Last fall, Siouxland Soup Kitchen Manager Danielle Tott was looking for volunteers to spend 24 hours with her living on the stre…

SIOUX CITY -- Alice Sea was the living definition of a people person.

SIOUX CITY -- Husen Jagir planned to embark on a months-long trip to his homeland in East Africa in August. He looked forward to seeing old fr…

Russell A. Nielsen, a local optometrist with a wiry figure, wasn’t known to be very athletic.

John Allen McMurchy knew all of the good fishing spots.

Warren Pohl's love for guitars, music made him 'a kind and generous man'

Warren Pohl and Mick Staebell shared more than their love of music. They were buddies for nearly 44 years, including 10 years together in the …

Robin Darland described her mother Faye Barr as an "encourager" and an avid player of cards – usually euchre or rummy. She noted people always enjoyed being around her.

Day Reh brought family to refugee camp, then to U.S. for brighter futures

Day brought his family to Thailand from nearby Myanmar, fleeing when government officials began fighting and killing people, and burning the villages where people lived.

John Brucher was a jokester who commanded respect

Jacki Brucher Moore watched the butter make its way around the dinner table, passing from one hand to the next.

Iowa Mourns: 30 stories from around the state

Barbara Sherman was a tour guide at the Czech Museum

When Barbara Jean Sherman first met Jerome George Sherman, a military man with orders to post in Fairbanks, Alaska, she knew there was a spark. But she couldn’t have known how their love would bloom across 3,000 miles of land and sea — especially back in the 1950s.

Nobody made peanut butter frosting like Barbara McGrane-Brennan. At least, that's what her daughter, Tonya Brennan, says.

Bryce Wilson always had rhythm in his heart.

Jackie Lake left her Oklahoma home on a quintessential autumn day in October 1987, heading northeast to Iowa to meet this new friend her brother kept raving about.

Jim Miller, a talented woodworker, died one day shy of 65

Deb Miller first started talking to Jim Miller Jr. from the backseat of his taxi cab.

Mel Stahmer was a beloved mailman in Coralville

Ed McCliment was a University of Iowa physics professor

In Iowa City’s Hickory Trail neighborhood, it was common knowledge that Ed McCliment took a morning stroll to a nearby convenience store and returned with a cup of coffee in one hand and a fresh copy of the New York Times in the other. On the way back, his eyes would be transfixed on the newsprint as he walked — no need to watch his feet along the well-trod route that always carried him home.

Patrick C. Parks and aviation were a match made in the heavens.

Katie Jacobs lived where she was born, farming most of her life

Walt Bussey kept his Aunt Katie Jacobs' leather work boots when she moved into a nursing home eight years ago, hoping she would one day return to the family farm to wear them again.

Mary “Kitty” Rolfes loved to gab, usually about her family.

Norma Jean Perry loved being a grandmother so much that she didn’t stop with her own eight grandchildren.

Stan Patrick lived, and died, with the Chicago Cubs by his side

For someone who loved practical jokes as much as Edith Elida Anderson, April 1 took strategy.

If there was ever a cause for celebration — from St. Patrick’s Day to birthdays to retirements — Jim Orvis had a greeting card for it.

David Worthington 'was a fighter all the way'

David Worthington never backed down from a fight.

Wiuca Iddi Wiuca spent most of his life in limbo, searching for a place to call home.

Lola Nelson had a green thumb, often giving away bulbs

Lola Nelson's green thumb earned her a reputation in the small town of Ollie.

Marilyn Prouty, an only child, loved having a big family

After growing up an only child, Marilyn Elizabeth Prouty knew she wanted a big family — a dozen children, to be specific.

When Amy Gardner was younger, she was, admittedly, a troublemaker. Her transgressions were generally kids’ stuff, like taking her parents' car for a joyride or talking back to a teacher.

Ken Baxa had gentle brown eyes and a huge heart

You’ll have to excuse Janet Baxa’s laughs when she talks about meeting her husband, Kenneth "Ken" Baxa.

Therese Harney was a Johnson County Hall of Fame bowler

Therese J. Harney spent hours and hours in bowling alleys trying out grips, practicing approaches and watching her ball ramble down the lane and smash into the pins — hoping, of course, she would knock them all down.

With a swing set, a sandbox, a tetherball court and a little red playhouse built to look like a train engine, Lucille Dixon Herndon ensured her family’s yard was a childhood dream made real.

Regina Thiry was an expert quilter.

Carroll White was a helper from childhood to age 100

Even dogs could tell Daryle Jass was a good guy.

Don Lole cultivated such strong, deep roots in the small, rural town of Villachuato, Mexico, that he became a living landmark.

As dozens stood in Central Park listening to speaker after speaker take their turn at the microphone, the overarching message to the crowd bec…